"I think the biggest things are footwork and protection. Those are the two most important things in terms of playing the quarterback position. You know, how can we get protected? Learning that, understanding that as best as I can, and then also on the footwork side of it, the better your feet, the more plays you can make."

Protection. How can we get protected?

Seattle's offensive line, according to Football Outsiders, ranked 20th in the NFL in adjusted sack rate of 7.2% in 2012, which, per their metrics, gives sacks (plus intentional grounding penalties) per pass attempt adjusted for down, distance, and opponent. This was a very nice improvement over 2011's numbers, where Seattle ranked 24th in the NFL with an adjusted sack rate of 8.1%, while giving up a whopping 48 sacks (which was actually adjusted to 50, retroactively, by the NFL).

Part of the reason Seattle held off on Drafting any offensive linemen until the 7th round this year was that Tom Cable is apparently pleased with the progress his group made in '12. Responding to the question of if he is hoping for a big jump from 2012 to 2013, Cable recently replied:

"Well, the young guys for certain. You know, as a group, we probably made the big stride last year. When you finish third in rushing and you take off 17 sacks from the year before, you convert in critical situations at a higher percentage, they're doing something right. So this year, we're going to see if we can accomplish all those and then some."

So, it would seem, Seattle's main group of starting linemen (I say that as opposed to 'starters' because of the large amount of injuries and platooning that went on) finally started to get onto the same page with each other and in year two of Tom Cable's ZBS install, finally seemed to start to 'get it' as a group.

Part of this may be improved coordination among the different parts and part of it is likely growth from Max Unger in his leadership role on the line. Getting guys to where they need to be and making last-second changes, varying his snap tempo, etc and so forth. Part of the success though, without a doubt, was due to one Russell Wilson.

The pre-snap phase of the game for a quarterback is one of the least understood from a fan perspective and most difficult areas to master from a player perspective. The greats - Tom Brady, Peyton Manning, Drew Brees, Aaron Rodgers - seem to win snaps even before the ball is snapped because they're able to identify a defense, where the pressure is coming from, where the weak spot will be in coverage, and where their weapons will be best utilized.

All of this thought process takes place in a matter of seconds.

As for explaining exactly what these QBs do in the pre-snap phase, I'm not going to blow smoke up your ass and pretend I really know. I think I have a very, very general and vague idea of it and most of that perception is based on watching film and hearing analysts describe it. I distinctly remember hearing Greg Cosell describe the amoeba (or psycho) fronts a few years back, talking with Doug Farrar the Shutdown Corner Podcast, and he described the process: "It's really common sense, if you think about it. Tom Brady sets the protection at the line of scrimmage, and here's how you set the protections -- you have to choose the five players the offensive linemen are going to block."

That seems easy. Except that guys are moving about constantly and sometimes (gasp) teams send more than five guys at you. As Cosell noted:

"And then, when you get to six and seven rushers, backs and tight ends become responsible for them."

Ok, so that makes sense too. Only it's not always the easiest thing to do to convey to backs and tight ends whom exactly they should be blocking when it's loud and the play clock is at 3 seconds. Nonethless, this happens countless times in every game and each team has their own set of rules as to who-blocks-whom and how the protections are set.

I was watching the Seahawks' blowout win over Arizona last night and noticed one play in particular that really illustrated this concept of 'getting protected', and Russell Wilson handled it beautifully.

It started with a hard count. The ever essential, difficult to master, hard count.

I remember reading/hearing that on the very first play of the Seahawks' 2013 OTAs, Russell Wilson got the defense to jump offsides by using an effective hard count. It's this type of subtle, veteran skill that can help young quarterbacks make significant jumps in their 2nd and 3rd years, and for those unfamiliar, a 'hard count' is essentially a fake hike signal that quarterbacks will use - a variation in tone/volume/cadence in the snap count, that attempts to get the defense to jump or display their true intentions early, thus giving the quarterback an advantage. Many teams will use a hard count on fourth and very short, attempting to get the defense to jump, and with no intention to ever actually snap the football.

Anyway, let's walk through the play:

Week 14. Seahawks lead 3-0 midway through the first quarter, and though things would eventually unravel for the Cardinals, they'd played the Seahawks tough to start. With Seattle stuck deep in their own end on 3rd and long, former Arizona Defensive Coordinator Ray Horton - known to be very aggressive - decides to bring some pressure. Not surprising whatsoever. I knew he would. Mama Seahawk probably knew he would. Pete Carroll knew he would. Russell Wilson sure as sh*t knew he would. Getting protected, then, becomes the main concern.

Below, you can see how the Cardinals come out in response to Seattle's '11' personnel grouping, with Robert Turbin in the backfield next to Russell Wilson in the shotgun, Sidney Rice/Doug Baldwin out to the right wing, and Golden Tate in close left. With Zach Miller set right in the h-back spot, with tight receiver splits, this is an interesting formation on 3rd and long - it almost feels like Seattle will just concede the field position predicament and run a draw here.

Nonethless, Wilson sets about getting protected. At first glance, there are five Cardinals on the line. That, as I would assume, is the 'base protection' group. Your five offensive linemen take those five possible rushers. Everyone in the stadium knows that Horton likes to use exotic blitz looks though, so the Seahawks don't simply assume the closest five guys will be rushing. 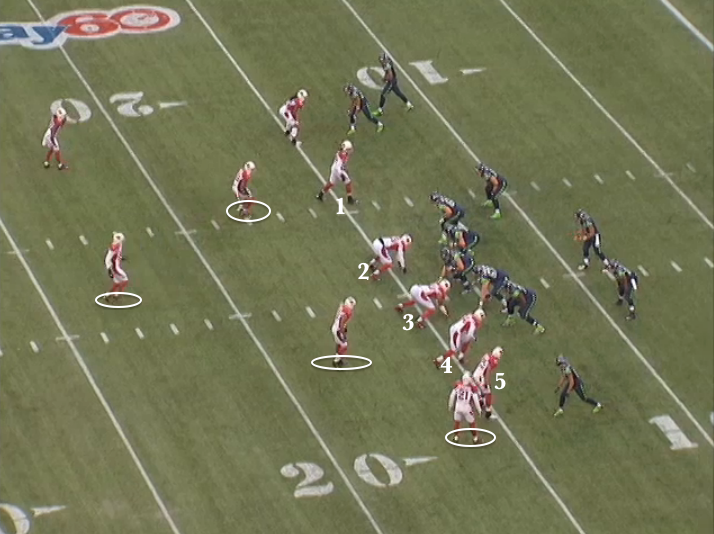 Here's how a pre-snap protection goes down in real time. Note how smoothly and calmly everyone assumes their roles after two Cardinals give away their intentions by flinching/moving forward noticeably at the Wilson hard count. Pretty crazy, really.

Chris Myers: "The Cardinals blitz more than any team in the league... and here they come!"

The Cardinals send seven. SEVEN. Seattle rarely rushed more than four. Haha. Regardless, the Seahawks protect with seven, and pick up the blitz calmly. A stunt on the interior nearly foils the otherwise perfectly executed protection scheme, but Russell Wilson calmly steps up and makes the throw to Sidney Rice for a first down. Here's where the protections (I think) ended up landing.

Russell Okung had the defensive end that faked outside then pinching down. In a lot of cases, if you have a outside linebacker coming in at the last second off the edge, just outside a defensive end, from that angle, the OLB is going to be going outside. The Cardinals want Okung to jump outside and take the blitzing outside linebacker to his side, allowing the defensive end to get penetration from the middle, but Okung doesn't take the bait, knowing that rookie Robert Turbin will be picking up that 'bogey'. 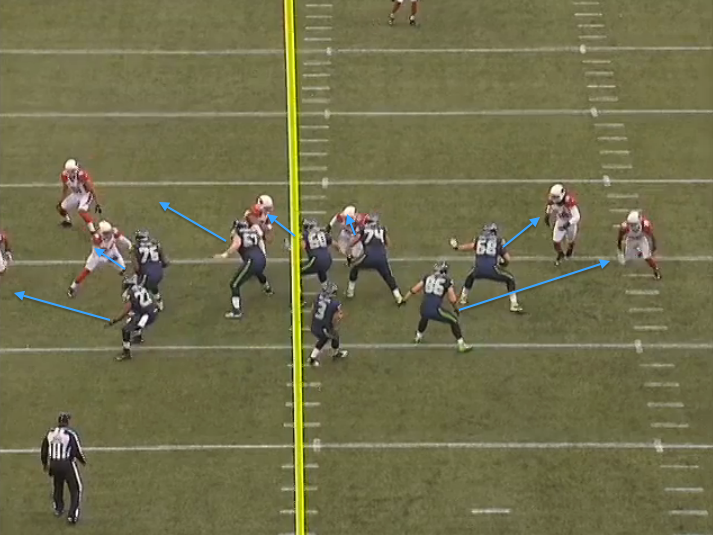 A stunt on the interior nearly gets through - stunts obviously can complicate protections and players simply must adjust on the fly. Moffitt doesn't really do much to stop the penetration but for whatever reason, Calais Campbell hesitates for one tick - enough to let Wilson make the throw. I'm guessing he broke down a second in the thought that Wilson would scramble. This hurt his forward momentum into the quarterback. See below.

Big, big first down. Seattle would drive down the rest of the field and score, and the first body blow was landed. Before the half was over, the rout would be on.