The Seahawks, Dan Quinn and the 3-4

The Seahawks may run a lot more 3-4 defensive alignments this upcoming season than in previous years.

Share All sharing options for: The Seahawks, Dan Quinn and the 3-4

Dan Quinn, the new Seahawks' defensive coordinator, liked to use multiple fronts as DC last year at Florida. He would routinely switch between 4-3, 3-4 and various nickel defenses to combat the opposing offense. What defense Florida decided to play was based on the offensive personnel groupings, down and distance, and style of play of the other teams. This multiplicity is something that he may implement on the Seahawks this season.

With that said, I expect the Seahawks to predominantly run a '4-3' defense because that is what Pete Carroll, a defensive minded coach, has preferred over decades as a coach. However, I would not be surprised if the Seahawks played a lot more '3-4-style' looks this year than years past because that is what Quinn ran a lot of at Florida. Here are some accompanied stills/GIFs to illustrate the various defenses that Florida played last year.

3-4 defense on1st and 10 against Louisville. 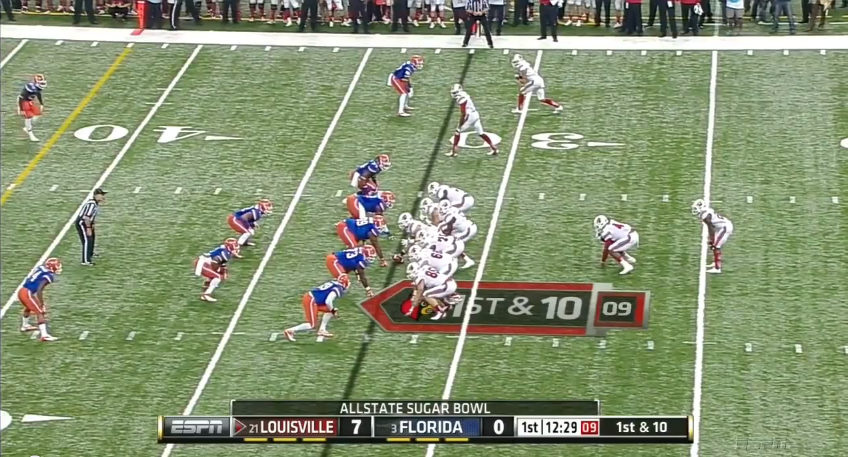 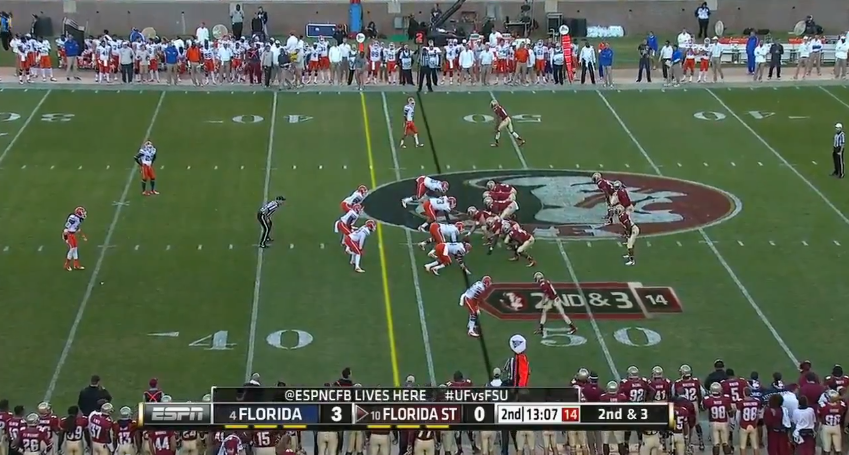 Nickel defense on 1st and 10 and against Florida St.

Playing multiple fronts is not something that is ground breaking. Every team in the NFL switches their defensive alignment but not every team switches between a 4-3 and a 3-4 defense. The Seahawks, even for how different they like to do things, didn't regularly switch between a 4-3 and a 3-4 in 2012 despite having a lot of players that could play in either system. A lot of their various alignments were either 4-3 under or a 4-3 over.

The game that it was most obvious to me that the Seahawks were going to a 3-4 on the fly was the 2nd time they played the 49ers last season. Every time the 49ers would go to their 3RB Pistol formation, the Seahawks would audible to their 3-4 alignment (you could see Seahawk defenders signaling the change). The following GIFs are a demonstration of this.

In order to counter all the unconventional plays that the 49ers have a lot of success with out of this 3 RB set - the Seahawks scrambled to line up in a 3-4 defense. The 49ers tried to get the Seahawks to over-commit to defending the run with a PA pass, but were clearly unsuccessful in this case.

Changing the defensive alignment on the fly may be something that we see more of this year because, as stated earler, Quinn called a lot of 3-4 looks at Florida. Also, with the possibility of Bruce Irvin becoming the starting SLB (or playing SLB frequently, at least) - the Seahawks now have the personnel to be a serious threat from this look. A lot of the 3-4 defensive fronts the Seahawks ran last year were benign.

They often consisted of Chris Clemons dropping back into pass coverage while KJ Wright rushed the passer -- essentially putting our best pass rusher into coverage while our best covering LB rushed the passer. Occasionally both players would drop back into zone which would leave Brandon Mebane, Alan Branch and Red Bryant as the pass rushers -- hardly a deadly combination. Sometimes Clemons and Wright would both blitz in which Clemons would get pressure but Wright would come up short. I love KJ Wright's game but at this point in time, his pass rush ability is not something that OCs lose sleep over. If Irvin can reach his full potential, he could be that insomnia causing type of player

Furthermore, this automatically switching to a 3-4 based on the opposing offenses' personnel can not only be implemented against "whacky" Pistol formations but against traditional formations that all enemies use as well.

As offenses league wide become more dynamic with their formations, personnel groupings and play calling - defenses too must become as equally dynamic to counter the offenses' attack. This why the Seahawks have regularly switched between 4-3 under, 4-3 over, 3-4, nickel, big nickel, dime and bandit packages throughout the Pete Carroll years. If the Seahawks' defense lines up the same way on every down, the opposing offense is going to know exactly how to exploit it. Playing multiple fronts makes offensive lineman have to alter their blocking schemes, QBs to change their reads, and OCs to adjust their play calls - more 3-4 looks may be the way Quinn tries to achieve this.

Big up to Danny for all the graphics!