This Week In Defense: San Francisco 49ers at Seattle Seahawks

Share All sharing options for: This Week In Defense: San Francisco 49ers at Seattle Seahawks

After this game ended, the emotion I felt was a sense of relief. This game was the Seahawks' second win in the division, but also over a 49ers team that had just come off of an impressive win against the Patriots. Everyone was on edge believing this was a game the Seahawks needed - not just for confidence - but to get that elusive first victory over Jim Harbaugh during the Pete Carroll regime. The 12th Man got some credit early and deservedly so; however, the secondary almost went unconsidered by most when talking about this game, outside of the Kam Chancellor hit on Vernon Davis.

This pass break up by Jeremy Lane is amazing. The 49ers come out and test the Hawks' backup cornerback on the first play with a deep bomb - this in stark contrast to the first meeting with Seattle where they ran a simple Iso play for seven yards.

Lane is beat here; in most situations a corner panics, reaches or tries to throw himself at the receiver but instead, Lane actually waits for the ball and gets a great tip on it. The significance of this play can't be overstated - had it been successful for the 49ers a tone could certainly have been set. The next two calls are passes - Richard Sherman breaks one up and then Michael Crabtree attempts a push-off on third down against Lane but Colin Kaepernick can't make the throw. 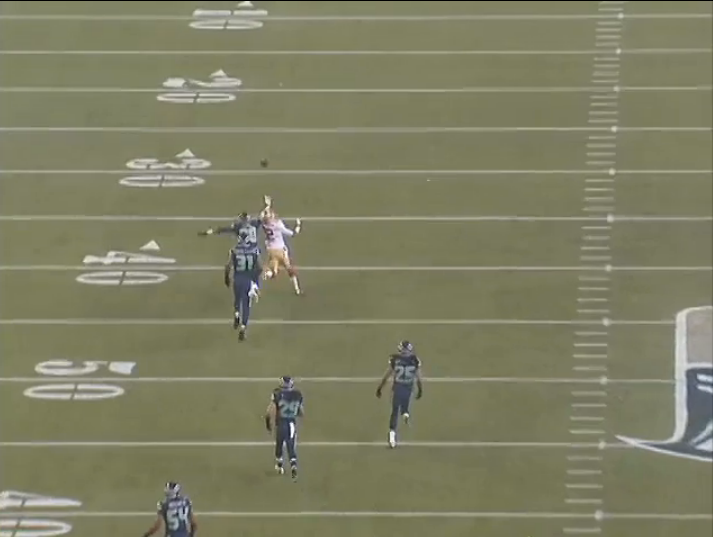 The poor 49ers players, they had to work hard. All this made possible because when the crap hit the fan, Jeremy Lane didn't panic.

Brandon Mebane does work. After the three and out, Jim Harbaugh's instant reaction is to immediately return to the running game. Mebane's surge off the snap again turns the center instantly. KJ Wright is patient. If you watch this in real time it's so smooth that it looks effortless. It pretty much reminds me of the play the 49ers ran on the first play in week seven. K.J. continued his upswing as the season progressed as Seattle's most improved linebacker week one to this game here.

This play highlights the struggles of both Bruce Irvin and Alan Branch in this one. Bruce gets driven out of the play and Branch gets moved to the inside of the run. This leaves a huge gap for the runner to get 3 yards. This kind of play illustrates why Alan Branch had struggled so much this year. He just allowed a lineman to control him - plays like this are called influence blocks.

They are essentially where a guard will give up a shoulder to the inside or outside and "allow" penetration up the field to the opposite side of the run removing his man from making a play without having to try and wrestle him to the ground. This was a staple of Chris Gray back in the day when Seattle boasted it's most experienced line in 2005. 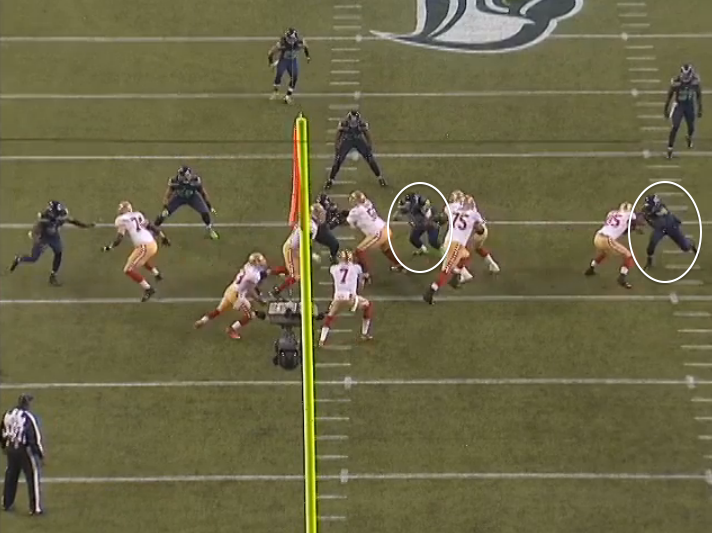 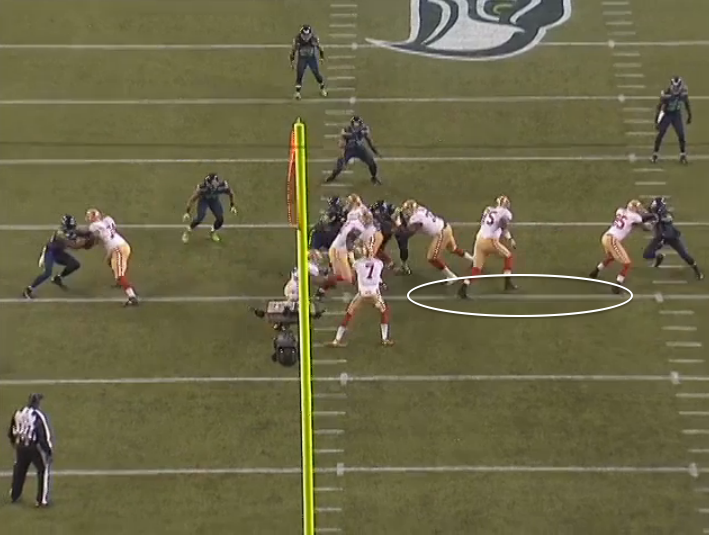 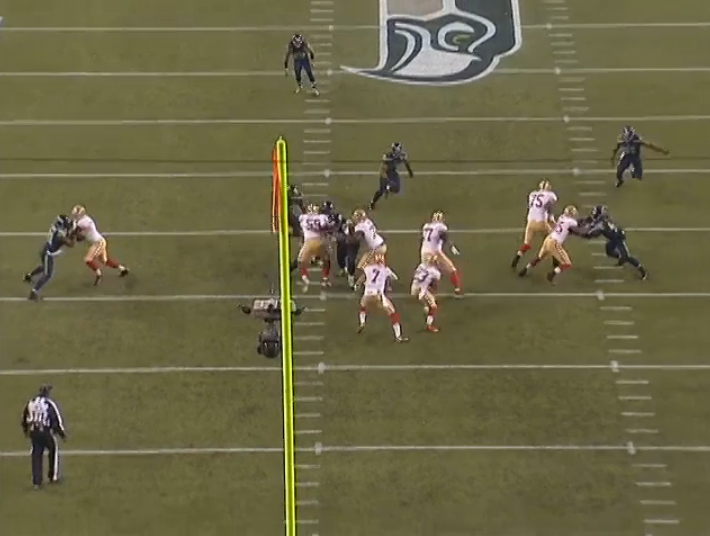 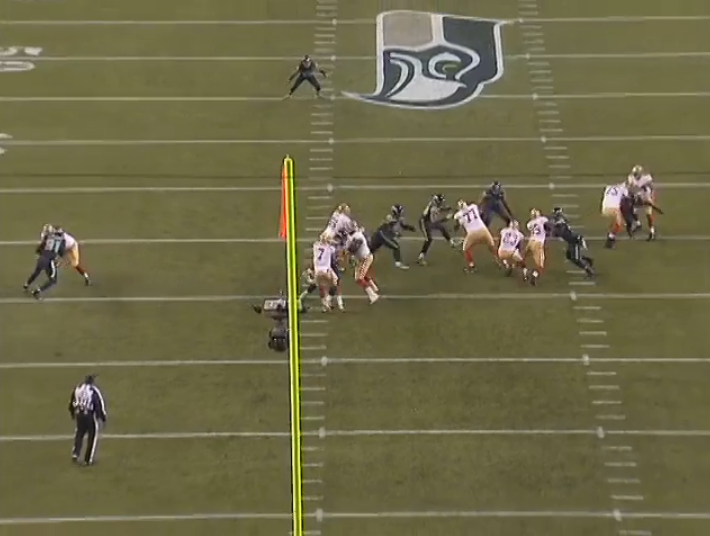 For Bruce, he's gotta work on being able to get off blocks better but also being able to battle for leverage against a block. A good D-End even aligned outside - as Bruce is here - can fight to get back inside if he has good leverage. As it was, it may not have impacted the play's success with Branch gone, but Clemons is pretty good about this exact thing.

This catch by Vernon Davis is impressive. Kaepernick drives the ball into the ground and Davis scoops it off the turf. The play looks a bit confusing as Sherman makes the tackle while Malcolm Smith drifted to the sideline. I don't know if the Seahawks were trying to make this coverage happen or more miscommunication was happening; I lean to some kind of communication issue. If you look at the alignment against the 49ers bunch formation, Malcolm Smith instantly turns to run with Crabtree while Richard Sherman drifts back from his initial starting position. The whole thing doesn't make much sense.

[1st Qtr :21 3rd and 6] C.Kaepernick pass incomplete deep right to V.Davis (K.Chancellor). SF-V.Davis was injured during the play. He is Out.

This play probably encapsulates Seahawk fans' feelings on the game. Kam Chancellor's wicked and legal hit (Statement inserted for the benefit of 49er fans who whined about it.) However, this is the exact type of play I like to take closer looks at with these articles. Most people see this on TV and they notice the end result. This play has a few moving parts that actually make it possible.

The 49ers run a great play here and use Crabtree to move Sherman inside while Vernon Davis runs underneath the route and to the sideline on the wheel route. Malcolm Smith makes two mistakes here.

First, he gives up far too much ground and second, he recognizes the route of Davis far too late and tries to get over to defend the round - knocking down Richard Sherman creating all kinds of chaos. Vernon Davis is wide open for the catch, but Kam Chancellor sees the mistake and was already making his way to rectify it, and boy did he.

Richard Sherman's knowledge is beyond most at this stage of their professional careers. He sees at the snap that Kaepernick is staring left. Sherman has perfect leverage underneath his man and is trailing just a stride behind him. To me, it almost looked like Sherman was baiting him to throw the pass by trailing. Kaepernick does exactly that by coming back late and throwing over the middle so quickly that even if he had seen Sherman there was no way for him to stop the throw. 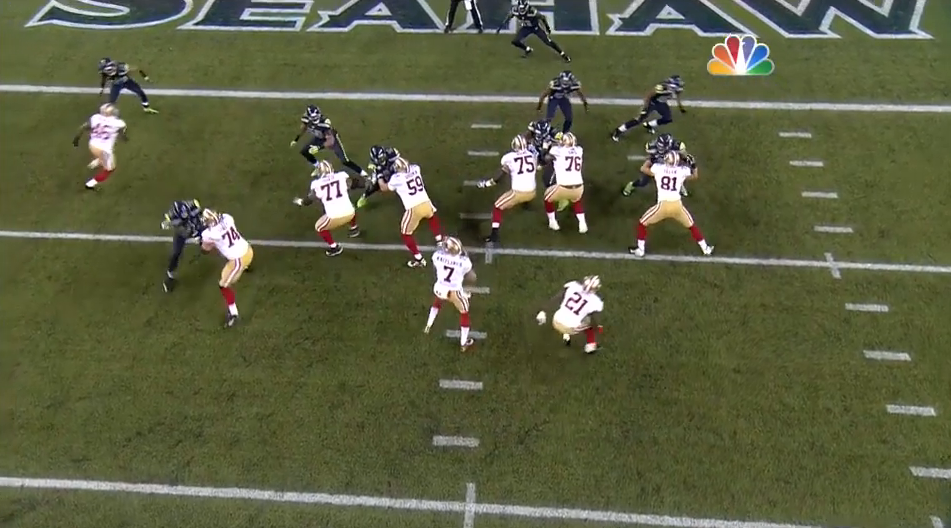 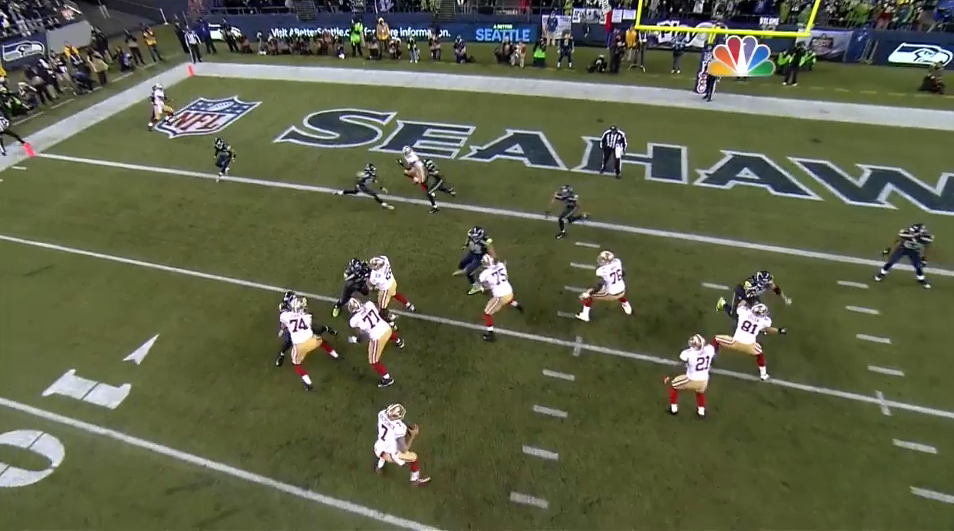 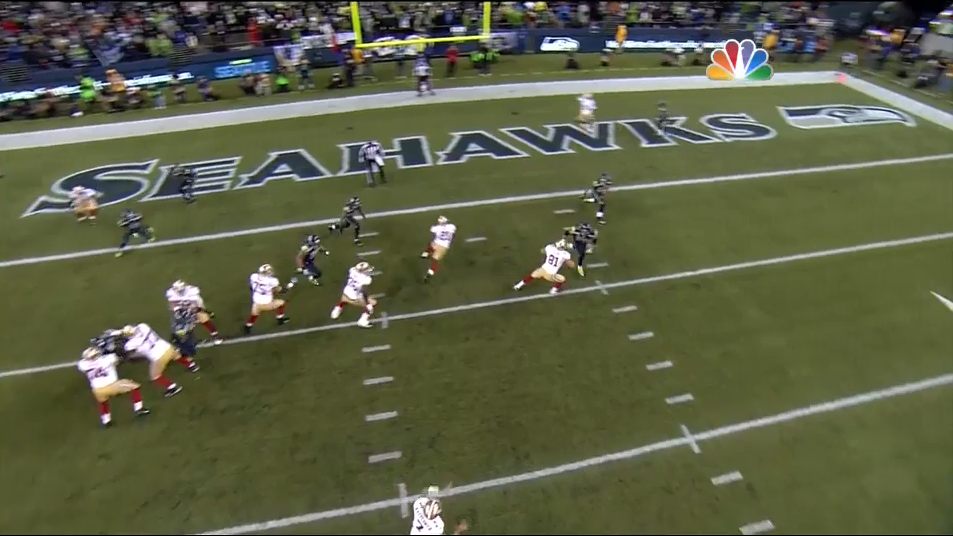 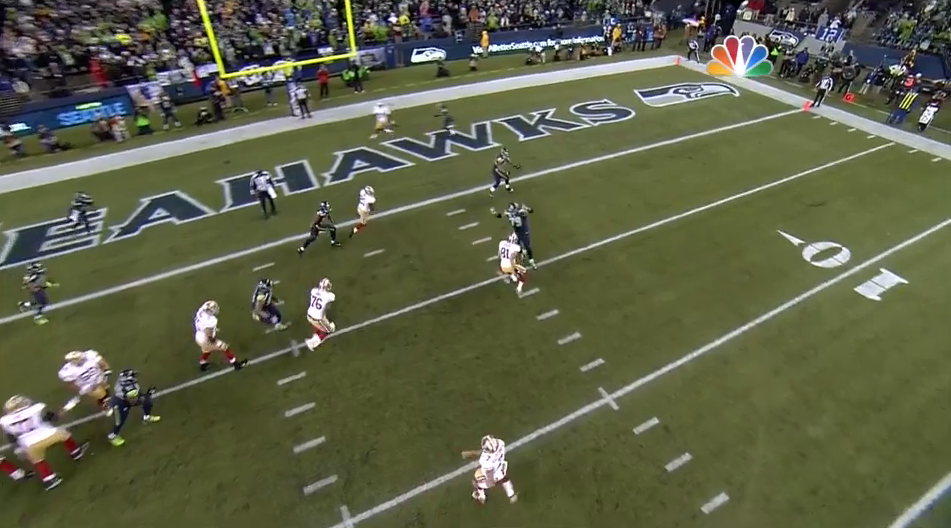 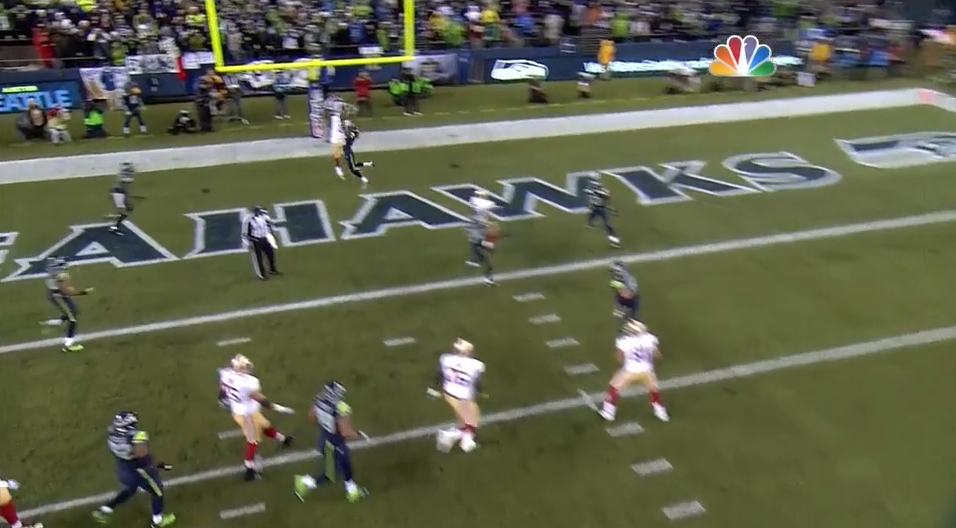 The veteran Chris Clemons makes the play here. He got inside the push block of Joe Staley, and reads the screen instantly. Harbaugh wants a holding call, but he doesn't get it. Instead it's ineligible man down field, because Kaepernick tries to continue the play with about three of his lineman up the field instead of throwing it away.

A pass breakup over the middle stalls a drive after Russell throws an unfortunate interception. Bobby Wagner's patience here is key. A tendency for middle linebackers is to back pedal as much as possible keep things in front of them. This usually creates enough space for underneath routes to do some damage. However as soon as he sees Crabtree turn and sit down he sticks to him like glue as Kaepernick comes to him after seeing his deep route covered expertly by Jeremy Lane.

I love this sack by KJ Wright. I don't think people realize how much a gimmie sack like this can actually go wrong and how often it does. Essentially, it's a blitz by the Seahawks against what appears to be a naked bootleg to the left by the 49ers. KJ Wright is unblocked on the end and Cris Collinsworth points out after this play that the back is trying to get Kaepernick's attention so he's aware of this. The ball is snapped and KJ wright makes an important decision here. Instead of Slashing down at an angle to attack Kaepernick, he hangs back by just a bit. This allows him to hang in against the spin move. This could have been really bad if you had KJ scrape at any angle leaving loads of space for Kaepernick to pull it down and run.

The 49ers try a deep throw over the middle and the Seahawks have a party in the endzone as three of the secondary surround the target and Lane flies over attempting to deflect the pass. I took note of this play and several others in this game. Stepping in he looked like a more athletic Brandon Browner. Not nearly as strong, but has the length that makes you notice him. He's also able to track the ball in the air about as well as I've seen. I would be completely okay with him starting when the Seahawks look to replace Brandon Browner.

I have to go Jeremy Lane here. Pressed into service due to Brandon Browner's suspension, he played this game well. The first play was notable, but the complete game was damn impressive. I came away as I said before with the belief this kid could start over Browner now.

Overall View of the game:

The Seahawks were helped early by the 49ers fascination with the deep ball. By the time they got back to a familiar look it was 21-0 and the Seahawks could play patiently on defense. The Seahawks only had one sack in the game and still failed to control the line of scrimmage. The secondary, despite all the hype coming in after the Niners invincible game against the Patriots, did not get rattled at all, and seemed well prepared for most of what Harbaugh and crew featured in this game. Gus called some edge blitzes, which were not disguised, but it's clear they wanted to keep Kaepernick in the pocket by making it scary for him to try and get out on the edge. For the most part it worked well.

Pass rush. Chris Clemons was the only one that applied any straight up pressure and the Seahawks line overall had zero pressures from up the middle. Pressure up the middle continues to be a unicorn for the Seahawks defense as when it happens it's easy to convince yourself it doesn't exist and you need new glasses.