"I knew I would have a chance - the corner was playing off, we had called a Colorado route - and I just knew that if I could sell that route and let him bite on it, I could have a chance. At first I didn't know that Russell was messing with the snap. I didn't know the ball was on the ground, so at first I was kind of wondering where the ball was, but then there it came." -Jermaine Kearse

Jermaine Kearse leads the NFL in points scored among non-kickers for the 2013 preseason with three touchdowns - two passes caught and a housed kickoff - and while I have tried to avoid purposely using tired sports cliches, one that I keep coming back to for Kearse is 'he just gets open'. Kearse, despite issues with drops in college, is 2nd on UW's all-time receptions, touchdowns, and yards lists and prior to that, was a four-star recruit out of Lakes High School in Tacoma. So. It's not like he's really come out of nowhere to impress people.

He had a knack for getting open and a penchant for production for an inaccurate quarterback in Jake Locker, then a young, up and coming quarterback in Keith Price. He made a few catches in very limited action with the Seahawks his rookie season after going undrafted, and over the past few months, has become the most talked-about surprise of Seahawks' training camp. Now, I'm not saying that Kearse will be a star in 2013 but he looks like a lock to make the roster and could be a strong depth piece and solid contributor.

Of course, if you get rid of the 'he just gets open' cliche and actually break down attributes that provide for him this mystical power, we can start to understand some of the nuances of playing receiver.

How is it that he's had success thus far? My first impression is that he runs excellent routes and has a strong knowledge of coverages. I would say that 'knowing where to settle' in a zone coverage is somewhat innate in the same way that floor vision would be for a point guard, but obviously knowing the concepts behind coverages you're seeing is extremely beneficial in getting open.

Imagine a receiver's thought process while standing at the line. Here's a random guess. Step-1: identification. "Ok - they're in a cover-2 shell with what looks to be underneath zone by the linebackers" Step-2: Knowing your scheme's route concepts. "We're dragging our tight end across the formation, which should draw some of the linebackers' attention - first the SAM, then the MIKE, and eventually, maybe, the WILL. This means I'll find soft openings at X spot in the middle when Zach Miller sucks the MIKE forward (for example)."

Understanding which defenders your teammates' routes are supposed to occupy is a huge advantage and when you hear receivers talk about identifying coverages this is a big reason they're doing so. "We're running X. They're running Z. Who is supposed to be open and who is the primary if they run Z again?" It's not just running routes. This is why many rookie receivers struggle so badly early on. Understanding coverages, understanding route concepts. Identifying coverages. Quickly. On the fly. Knowing what that means for your scheme.

We haven't even talked about option routes yet either, and the Seahawks utilize these frequently - "Ok, if the corner is playing off coverage I do X, if he's playing press, I do Y. If he blitzes, I do Z."

Back to Kearse. I've hypothesized that one of the biggest reasons that Kearse has had success in the Seahawks' program is that Steve Sarkisian's program and, importantly, schemes, were very similar. Kearse likely knew a large part of the West Coast Offense language, the concepts behind it, and the nuances within it. Washington runs a pro-style offense, so Kearse had an immediate advantage. Doug Baldwin, who played in Jim Harbaugh's Stanford Pro-Style offense, had a similar advantage and shined quickly as a guy that 'just gets open'.

Kearse noted on an interview yesterday that he and Doug Baldwin study together - noting that Baldwin studies 'as much as Russell' - and I'm sure that going up against Richard Sherman and Brandon Browner in practice every day has sharpened Kearse's skills. His athleticism was already there - quick feet, body control, and with LASIK surgery over the summer, hopefully more consistent hands. Or, maybe just more confidence.

Ok, I'm getting off-topic, I think. I wanted to break down a play. Let's look at Kearse's touchdown against the Broncos from Saturday.

My first impression looking at this play is to note how tight the two safeties are playing. When the ball is snapped, the corners on both sides are actually playing deeper than the safeties. I would assume this is because Russell Wilson is such a threat to run and in a first-down situation, the Broncos' defensive coordinator is thinking - 'run'.

Wilson can see the coverage and know, for the most part, that Kearse is going to have a one-on-one situation with corner Chris Harris. Wilson loves the one-on-one.

At the snap, Russell bobbles the ball and William Moore's (the safety to Kearse's side) reaction tells me one of two things - one - he thought that Kearse was running a shorter route, or two - more likely, he thought Russell was going to scramble after the play was 'broken' by the botched snap. With Moore running downhill, Kearse really does have a one-on-one situation and Harris has zero help in the middle of the field. This means Harris cheats to the middle a little bit, fearing an easy slant route win by Kearse.

As for Wilson - a perfect throw with ideal ball location even after bobbling the snap and taking an extra second to set his feet.

Kearse's excellent route also helps the situation. Kearse runs, turns his hips and looks back into Russell Wilson. In the bang-bang play speed of the NFL, if the corner waits any longer to make a move on a route, he's going to be toast any way. Thus - Harris reads a slant - and breaks on it. Kearse then changes direction quickly and smoothly, forcing Harris to turn all the way around, and by that point, Kearse's created ample separation. A divorce, even. 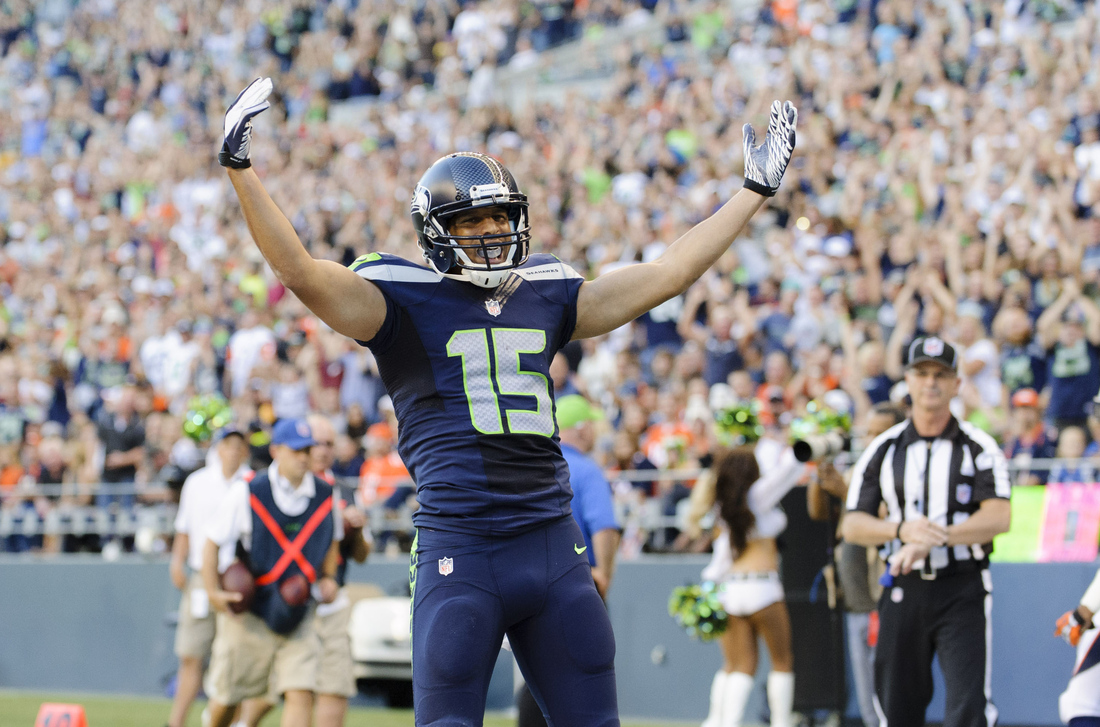