"Hold the Redline": Breaking down a major Seahawks' offensive principle for 2013

Share All sharing options for: "Hold the Redline": Breaking down a major Seahawks' offensive principle for 2013

"We're going to run the ball. We ran the ball more than anybody in the league last year. We had a rookie quarterback. We started out slow the first eight games then picked it up the rest of the season. That's something we're going to build on. We're going to get much better at it. This year, it's all about explosive plays for us at receiver. We want to get the deep balls. We didn't hit many last year, but throughout this training camp, that's all that we've been doing - attacking the seams, going downfield, big plays, big plays. If you can do that, you can have the outcome we had in the last preseason game: taking a knee at the end of the game."

On with Elise Woodward, Rice talked about how the 2013 Seahawks are going to go for a lot of explosive, big plays - quote "attacking the seams, going downfield, big plays, big plays." One concept the Seahawks are focusing on in order to get those coveted explosives with a lower risk of turnover is 'controlling the redline,' which we'll explain in this article.

If you know Peter Clay Carroll, you'll know that Peter Clay Carroll is greatly in favor of this potent combo of more explosive plays and fewer turnovers. The downside to this M.O.? Fewer yards after the catch. This is where Percy Harvin (and to an extent, Golden Tate) come in (or will come in, eventually) - both Percy and Golden can get explosive plays (defined by Pete Carroll as runs of 12+ yards or passes of 16+ yards) with no 'redline throws' and no need to throw the ball deep. Pete probably loves the idea of Percy Harvin even more than most because of his ability to get explosive plays with almost zero risk (no need to throw it deep into coverage with bubble screens, swing-passes, tunnel screens, and end arounds, etc).

But, Percy was to be but a piece of the offense, as Carroll has pointed out numerous times. The focus, of late, has been on something you might have heard the players referencing the past few weeks: 'the redline.' 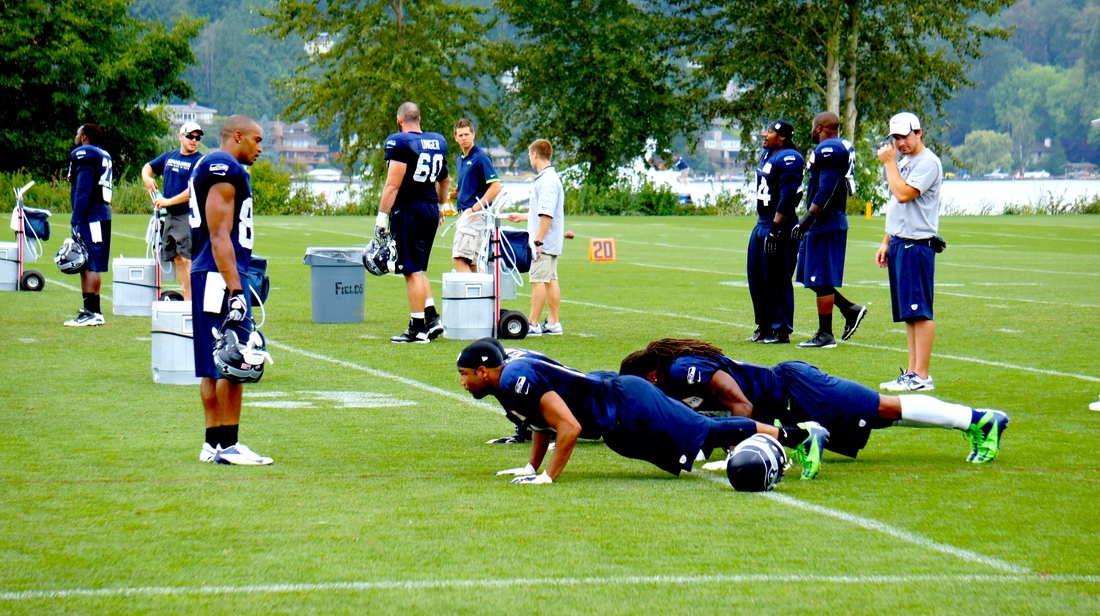 Doug Baldwin making his receiving corps do pushups on the redline for not owning it *quite* enough.

You may or may not have noticed peculiar red lines running up and down the three playing fields at the VMAC if you were one of the lucky ones to attend Seahawks' training camp practices. If you haven't noticed this before - check out this photo. (EMBIGGEN HERE): 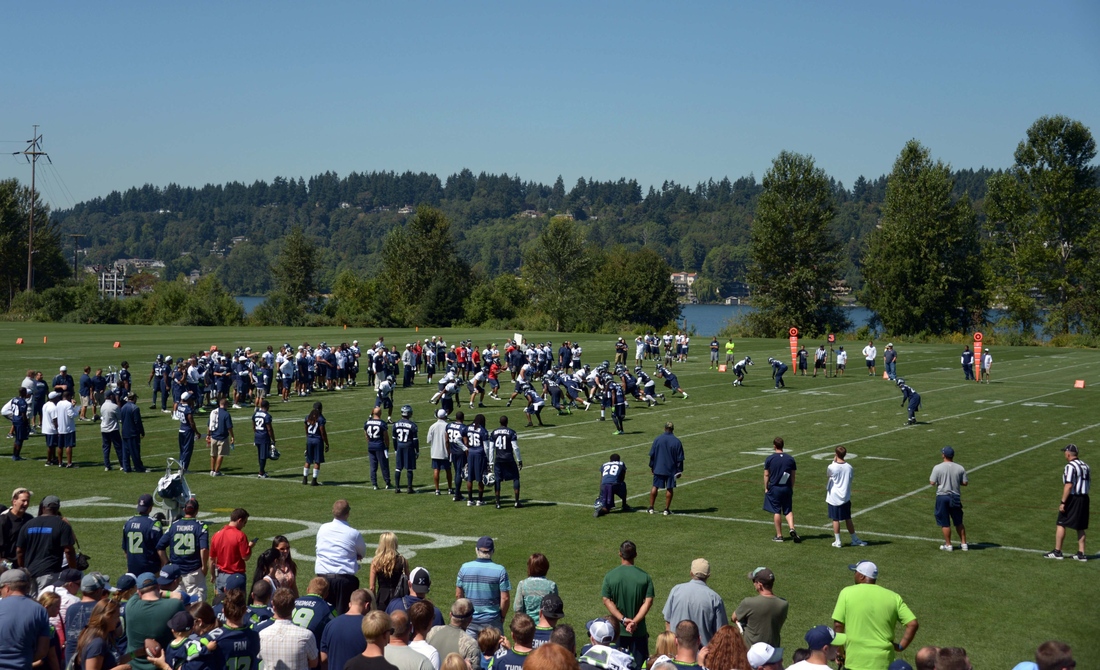 On each of the Seahawks' fields runs a red line, about halfway between the numbers and the sideline. This red line (hereafter called 'the redline') is a central piece in both the offensive and defensive principles the Seahawks are focusing on in 2013. This first article will break down the offensive importance, and part two will talk about why it's a big deal on defense.

Davis and I have started teaming up a little bit to create analysis, so instead of writing one article authored by yours truly and another authored by Davis, I've just combined our work together. Davis' writing will be in blockquotes and I sort of set the stage, but it should be noted that Davis was, as per his usual insightful self, the one that first noticed and studied this concept of 'owning the redline.'

When it comes to controlling the red line, I believe that Seattle receivers are more obsessed with controlling their width to the sideline than with using speed to blow by a cornerback.

It is a rare occurrence to see a Seahawk catch a long pass and then keep running down the field. Seahawks receivers, outside of Percy Harvin, aren't known for their speed. I know that Harvin and Tate are YAC specialists (and Tate somewhat 'broke out' last year with a bunch of YAC plays on deep passes) but it seems when the ball is traveling a long distance, Seattle wideouts end the play with the catch - Sidney Rice, in particular, has very little YAC; he is usually tumbling to the turf making an amazing toe drag and using his catch radius while diving for a pass. If you close your eyes and think about the big catches in 2012, think about how many of them ended with the receiver falling to the ground, into the end zone, or near the sideline.

Going back further, when you think of Braylon Edwards during the 2012 preseason, he made a bunch of long sideline "redline" catches (both on the left and right side) that had zero YAC, where he used his size and length to win 50-50 jump balls. He did not offer a ton to the Seahawks, but they kept him around for half a season because he could control that redline.

It's still weird to me that Braylon Edwards was on the Seahawks for a while.

Aside: Seth Kolloen tweeted a spreadsheet to Davis and I with the 'big play/explosive play' numbers (as defined by Pete Carroll) from 2012 the other day.

I never worry about Russell Wilson and his ability to make explosive plays - I worry about his ability to make the short 3rd down throw to keep the chains moving at times - but never on making explosive plays, especially on 1st downs with the threat of play action. Russell also rarely turns the ball over, with only two interceptions in his last eight regular season games.

Wilson is a good quarterback to have for these 'redline' throws. He "throws a catchable ball" and is accurate enough to throw to the correct shoulder (drop it into a bucket downfield). He does not have an "elite" arm in terms of velocity, but does have an above-average arm, with perhaps a tad bit more loft than some of the more "fastball" type quarterbacks. His velocity does seem to have improved in 2013 - and he was throwing fastballs against Denver.

Some of these 'overthrows' that people have been worrying about came on bullets Wilson has throw into tight coverage - essentially Wilson is putting the ball in a place where the receiver and only the receiver can get to it. It's just a bonus of that receiver can come down with it - but he puts them in position to make plays when open guys aren't available. There have been a few 'pure' misses during this preseason, but I am not sure we can expect Wilson to never miss a throw.

Again, the redline throw is a good match between Carroll's philosophy and Wilson meshing with his receivers' skillsets. Stephen Williams is intriguing to the Seahawks because he can control the redline. Jermaine Kearse seems to have this ability as well.

Now. I've personally seen Jermaine Kearse make this play in practice so even though this is a miss, we can take away some positives from it.

Russell makes his five-step drop, does a little half-hitch, and throws a pass where literally only Jermaine Kearse has a shot at the ball. It looks like very tight coverage but Wilson shows no hesitation at throwing the ball into a tight pocket right at the sideline. Why?

Well, look at the second gif:

Kearse does a good job of running up the now-invisible redline and owning that small area between the trailing cornerback and the sideline. The corner cannot play inside of Kearse or else he opens up the rest of the field for slants and comebacks, so Kearse simply must release and gain control of that small strip of land.

As Davis points out:

I believe the QB throws fewer interceptions throwing to the redline area (not zero interceptions) versus throwing balls into the middle of the field - where there are more defenders, and if a ball gets tipped, many times, another defender is there to make the catch on tips and overthrows. Here, along the redline, it will skip out of bounds harmlessly.

Here, he simply mis-times his jump by about a half-second and starts coming down before the ball is there. This is not a good example of high pointing a ball.

This play by Golden Tate is actually a better example of the redline concept we're talking, and illustrates the 'high-pointing a ball' expression.

So. Just your daily reminder that John Schneider has a type when it comes to receivers - guys with huge catch radii and guys that can high-point a ball.

Kearse may not be in Baldwin or Tate's category in those attributes, but he does control the redline well, which makes him valuable as depth. You're rarely, if ever, going to see receivers one through five on any given team possess elite high-point ability and catch radius. What Kearse gives up in some areas, he gets back in 'get-openness' and an ability to control his routes - particularly this redline concept.

Here's Kearse discussing the concept of controlling the redline following this game:

Williams is another guy that's not as well rounded as a Sidney Rice, Golden Tate, or even Doug Baldwin, but can do a few things very well. Seattle looks for what a player CAN do over what they CAN'T do, and Williams has proven a few times over this preseason that he can run a go-route. More importantly, he understands the concept of owning the redline so he can put himself in position to catch said go-route passes.

Apart from one of the most beautiful and accurate throws we've ever seen T-Jack make, this was a great job by Williams in giving himself a cushion on the sideline. Jackson was able to drop the ball up and over the corner and Williams sort of dove outwardly in catching the ball as he was able to stay inbounds.

All because he ran right up the redline and wasn't pushed off of it in his release.

Another example, from the Broncos game. This throw isn't as nice - Williams has to come *in* a bit to catch it, but the redline principle is noticeable.

Also, this may be my best piece of GIF-captioning yet.

Williams is a great preseason story but the odds are that he'll see few snaps in the regular season, barring some kind of injury to Golden Tate, Doug Baldwin, or Sidney Rice.

Williams is excellent depth, but there are few receivers in the NFL that are as adept in body control as Golden Tate. We've seen him go up, spin in the air, land right at the sideline, and keep running up field - so to say he has good balance is a major understatement.

What's underrated about Golden, though, are his feet, and how he uses quick, choppy steps to set up his routes and come out into his stems.

Watch Golden's route, then pay close attention to how he controls the sideline, leaving room for himself to make the catch and get his feet inbounds. Again, Wilson just has to drop this into a bucket 30-odd yards downfield.

The concept applies whether or not the Seahawks has a speed or size advantage versus their opponent. It relies on technique, body positioning, and an athlete's unique skill set to dominate an opponent. Usually, the opponent also possesses a unique skill set , but that skill-set may not be ideal for this particular situation, or this particular play.

Tate, on the redline:

Now, is the redline concept a new thing? No. Says Davis:

When talking to Scott Enyeart about the redline, he mentioned that this is not a new concept for coaches, or Pete Carroll at USC.  However, there is a greater emphasis on it this year (2013) for Pete.

Keep your eye on the redline tonight, and this season. In part two, we'll be talking about how the defense uses the redline to shape pretty much their entire scheme.