This Week In Defense: Seattle at Green Bay, Preseason Week 3

Share All sharing options for: This Week In Defense: Seattle at Green Bay, Preseason Week 3

Lots of folks wanted to see pressure and were curious to see how the Seahawks would hold up against the Packers' inexhaustible amounts of offensive firepower. With Aaron Rodgers playing only one series, no one has taken what happened too much to heart, as we all know it is preseason, but it seems that the loudest concerns at the moment are related to the offensive side of the ball - which I do not have to address in this series, thank you very much.

Tony McDaniel levels the right guard here. Rodgers moves effortlessly out of trouble and makes a nice shovel pass to Williams, but I said I was going key on this guy and the first play from scrimmage he flashes into my living room. If McDaniel can be like Alan Branch in 2011 and dominate about 20-25 defensive snaps - this team, with its surrounding rush talent, will be very capable of rushing the passer. He doesn't necessarily have to pancake a guard like a steam roller every play but that is certainly fun to watch and I'm okay with that too.

This play followed an incompletion on a deep bomb to James Jones over Browner. This kind of down and distance is going to be hard to win when you're up against a good offense, but what piqued my interest here was how quick the play was designed to be and just how well Seattle's edge rush came up the field. If the Seahawks had chosen to run a blitz here, it could have possibly been really fun. I expect to see some pretty exotic pressures in the regular season and the speed at the edge will only make that idea much more of a nightmare for QBs.

I was really paying attention to any runs Green Bay might call. This was one of their more straight-up runs, instead of the spread-look inside-handoff stuff they use most of the time. Brandon Mebane has a good surge at the point of attack but the blocking backside allows for a three yard gain. It was good to see Mebane get off the ball so well as I had noticed he seemed to be struggling the past two weeks. Earl Thomas with the tackle. 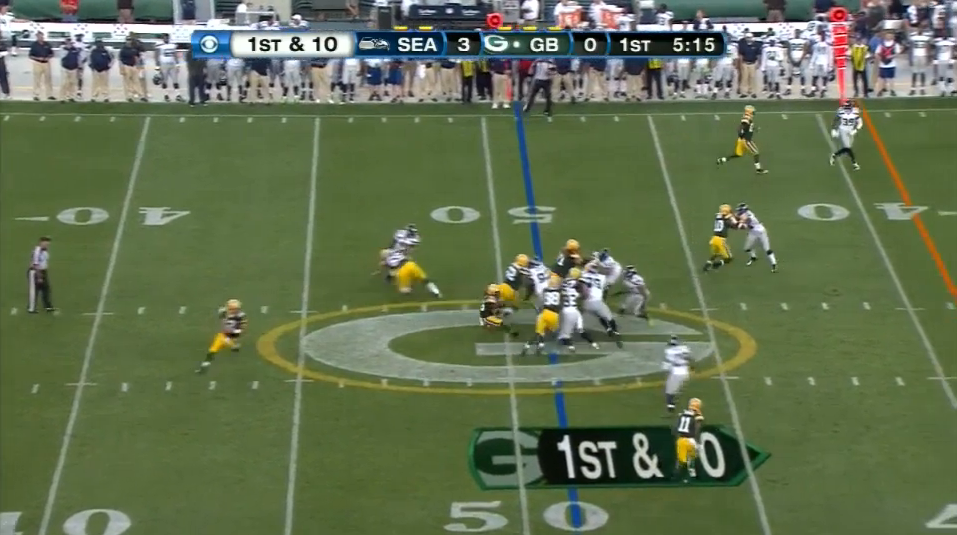 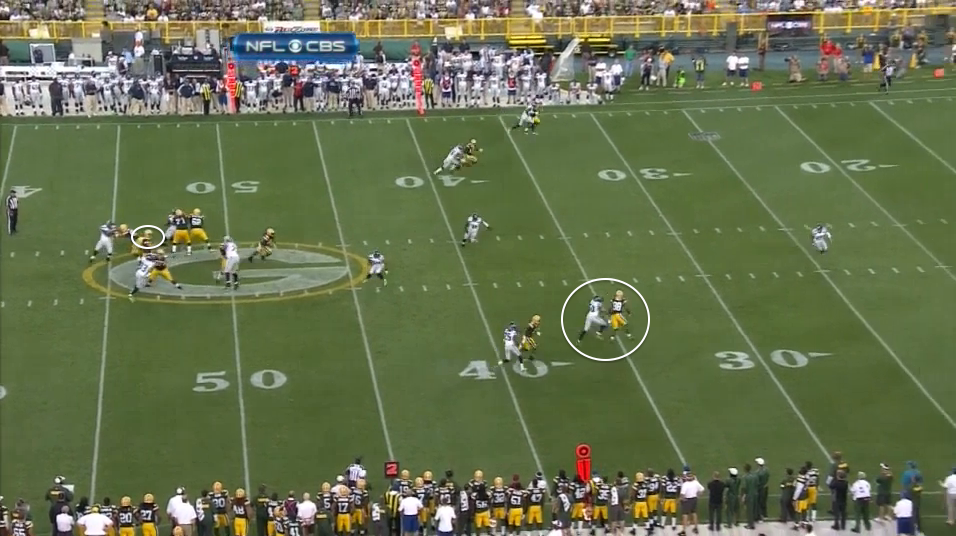 The Seahawks crowd the line of scrimmage and K.J. Wright is on Jermichael Finely. As soon as it's clear this is a pass pattern, K.J. has no chance against Finely's athleticism. If K.J. was supposed to get a jam on him, he gives no indication of that.

This play essentially looks like GB took advantage of a mismatch, just old fashion "better than the other guy" good tape to get while in the preseason, and K.J. will be defending TEs all year and so he needs every chance to fail now so he can succeed later when it counts.

It does, however, look like Kam Chancellor makes some kind of mistake here. He's coming down to the middle of the field but it isn't aggressive at all, perhaps in zone or something. Anyway, once Kam charges in, it leaves a huge throwing lane for Rodgers, who throws a dart for a big completion.

Green Bay runs a draw and the Seahawks get run over for a 4-yard gain. It's not as dramatic as it sounds but the team looked perfectly set up for the draw. They get lucky however, because Brandon Mebane manages to stand strong and hold his ground as he is bowled over by the oncoming running back.

Seahawks call a blitz here. Major pressure forces Aaron Rodgers to let the ball go a tad early and try and lead Finley to a near the pylon. It's too far out of his reach and GB has to settle for the field goal.

I expect a lot more blitzes this year with organization and purpose, especially if an offensive line demonstrates a clear weakness. The Hawks blitz both Bobby Wagner and K.J. Wright on the play and then loop Benson Mayowa into the cleared space. Rodgers, seeing this develop, tries to loft the ball up enough for Finley to catch up to the ball, but Finley is unable to do so.

Bruce Irvin makes an appearance here and has quite an impact, flashing his speed. It looks like Green Bay had some kind of screen called. I'm not familiar with this particular look so forgive me. It's essentially dead because both Irvin and Red Bryant explode past their blockers and Irvin has a fantastic tackle in open space.

Now I won't go as far as the TV crew did, and mention Irvin's instincts on the play or his skill to read it, because it didn't seem to me to be difficult - and he did look to be heading up field almost immediately at the snap, indicating he was rushing, perhaps. It could be that he read the play instantaneously (which would be awesome), I don't know, but when you have Bruce's kind of speed and you get a running start on a blocker, good luck to that unfortunate fellow.

Just how strong is Brandon Browner? I ask because on this play he's essentially pressing or battling the packer receiver Boykin with one arm for the bulk of it, and then continues to battle even after the reception is made. Earl Thomas appears from nowhere and probably surprised this kid, forcing the fumble. The ball is recovered by Walter Thurmond.

I wanted to also make special note of the fact that Thurmond essentially erased two slant routes with excellent press coverage. It isn't the main route on the two plays he took it away, but Green Bay uses the inside slant a lot to force safeties to stay near the hashes. Thurmond's play here allows Thomas to stay patient and flash in on the second play and cause the fumble.

Seattle comes with a blitz here. A little less exotic than the one earlier, it almost gets home and unfortunately Harrell is able to launch a throw. Sherman has good coverage and help from Earl Thomas, who sees the play develop, but trips and pulls down the receiver - drawing a flag. I don't worry about the merit of the flag here, just the play itself. Pressure brought and succeeded, and the coverage was excellent to defend the throw. The penalty is an unfortunate result of the uncontrollable circumstance of tangled feet.

Tony McDaniel has a terrific rush into a split by Green Bay's line and realizes Harrell's getting ready to throw and leaps, getting his hands up. If Harrell hesitates at any point, this is possibly a sack.

This play made me laugh because it is so inept by the Packer line. If they meant for a double team to occur there, it's awful. McDaniel just basically puts his head down as he starts to go for a push here and it had to be a giant surprise when there was no push back against him. Just a fun play worth reviewing.

Overall view of the game:

The Seahawks played well across the board. A few things here and there that need work, but the starters gave up only 3 points total (Rodgers only played one series but regardless, 3 points) and showed some good fundamentals against an offensive powerhouse. Very few big plays and very consistent on the line of scrimmage.

Player of the game:

Here I am torn, because I want to just blanket mention the D-line in general. However, part of me really wants to see Benson Mayowa get a shot at this team over a guy like Mike Morgan. He''s been flashy but also consistent. You're going to have weaknesses at LEO defending the run no matter who you pick, Pete! So let me say it now: Mayowa for LEO. Will you join me?

Questions thoughts? It was nice to have my own preseason here. I am so ready for these to be meaningful games.

-Thanks to Danny for making the gifs!