Seahawks beat Panthers: The play that never was

The Seattle Seahawks won last Sunday on a very important turnover - but as the game of football dictates, things could've easily gone the other way.

Share All sharing options for: Seahawks beat Panthers: The play that never was

You're the Carolina Panthers. Your team is down by five with over six minutes left in the game. Your offense has consistently made long, methodical drives against this staggered Seahawks defense, but you only have one touchdown to show for it. Your running game has been successful so far, amassing over 100 yards between three different players, and the YPC is not skewed by any big gains. Having two personal fouls definitely helped you as you dinked-and-dunked your way from your own twenty yard line to field goal territory, and between that, the read-option's been throwing the entire front seven off.

Now it's second and short. What do you do next? You could go play-action, but it would be better if you establish another run play here first - after all, get a new set of downs, keep the clock moving, and hopefully keep forcing the defense to cheat. Sounds like a plan right?

To put it bluntly, the Seahawks could've cracked right there and then. This was a team that had been affected by the sweltering heat, and the fact that they are without three starters on defense and a large chunk of players in their rotational group means that are undermanned and tired. Likewise, because each piece of the Panthers' core offense has had success, everybody - especially the back seven - were on their heels. What else are they going to run? With who? They had to be ready.

The Panthers obviously could - and did - take advantage of this when they came out in their triple option set. Cam Newton in the shotgun with former All-Pro DeAngelo Williams on his left side, the versatile Brandon LaFell by his right. Greg Olsen, the tight end, is on the left side of what appears to be a balanced formation. Now trying to prevent the touchdown - a gap of 24 yards - the Seahawks go to Cover 3, with Earl Thomas roaming the deep third of the field, and Kam Chancellor inching up towards the box.

As Newton picks up the snap, the four players in the backfield - Newton, Williams, LaFell, Olsen, freeze all three of Seattle's linebackers, Walter Thurmond (covering LaFell in the backfield) and Kam Chancellor coming into the box. They do this by moving in opposite, probably even counter-intuitive directions: 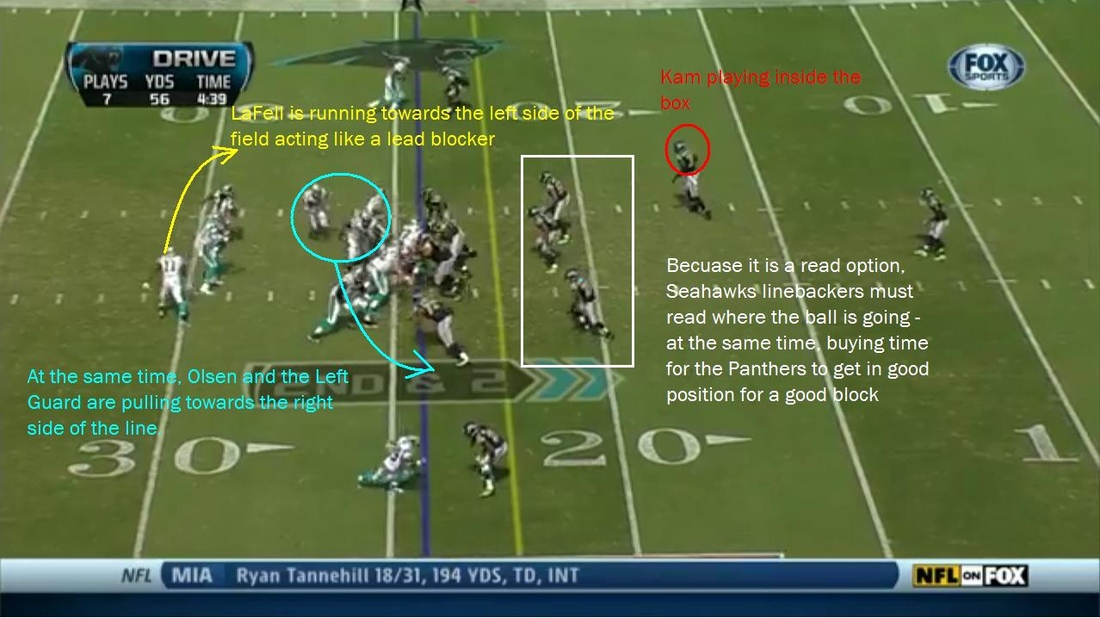 The hesitation is enough for the Panthers offensive line to crack a running lane for Williams. Bobby Wagner, however, fails to compensate. Chancellor, from the outside, instead bites on LaFell and Newton, along with K.J. Wright. This leaves Thurmond, at 5'11, mismatched against DeAngelo Williams and the tight end Greg Olsen as his lead blocker. It doesn't help that the gap containment lineman - Red Bryant - missed the tackle. There was no doubt that this was going to be more than a first down... 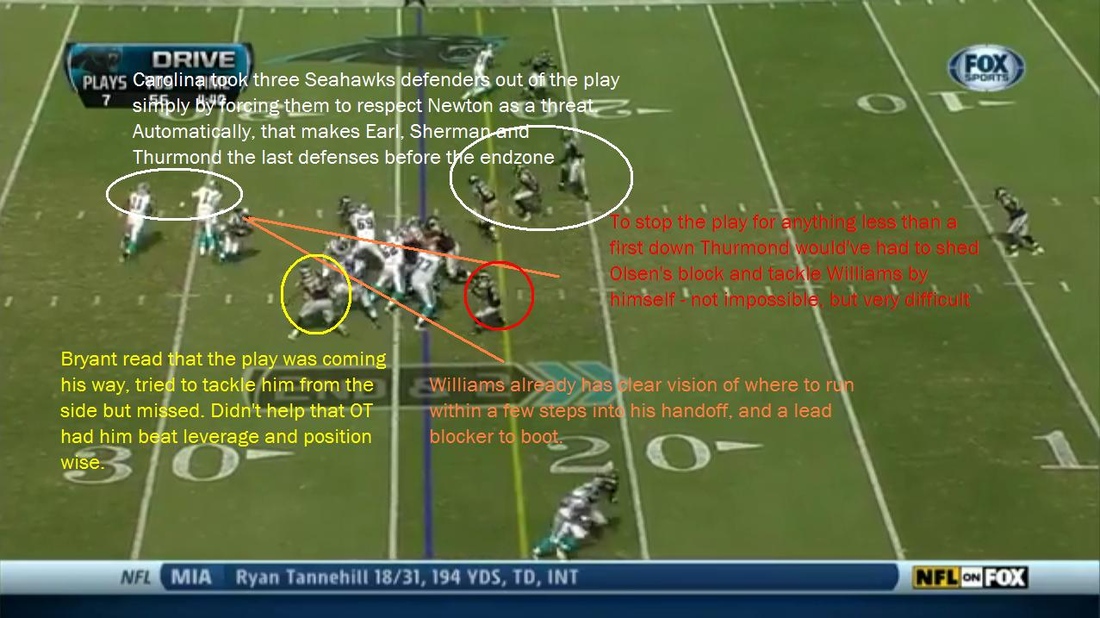 Earl Thomas would, using his speed, come up and meet Williams at around the 17 yard line before getting stiffed armed, and the running back would try to bounce it out towards the sideline. Inadvertently, this move makes Richard Sherman, who was following Steve Smith on a route, as the last obstacle between Williams and the end zone. He stonewalls the Panthers' ball carrier, which allows Thomas, now hot on his heels, to make the tackle, force the fumble, and end the last remnants of a Panthers threat.

It would be the last play Newton would run in this game. After all, that's the important part.

When we think back to the pivotal moments of a close football game, there's always the question of "What-If" that winning teams want to forget and that losing teams always remember. But it is important to remind ourselves that, while the Seahawks may have played tough game Sunday afternoon, they also played with a vulnerability that made them within a score of a 0-1 record. Hopefully, we don't get to come across this scenario next week.

(All Gifs are credited to Danny Kelly. You should thank him.)