How Seattle ran the final 5:25 off the clock to guarantee the win.

Share All sharing options for: Seahawks replay booth: Salting away the game

Fellow Field Gulls writer Aaron Sims and I have talked about the Seahawks' fondness for running the now-famous "Spider Y Banana" play over the past year or two, using their their fullback in the passing game (The fullback as the primary). Prior to last week's game, I talked about a few possible 'constraint' plays that Seattle would need to employ to neutralize Carolina's tough, tough front seven (Seahawks vs Panthers: A strength on strength matchup). As it turns out, predictably, these types of 'change up' plays factored in immensely as Seattle looked to run the clock out after regaining possession of the football with 5:25 remaining in the game.

Something that cannot be overstated - the ability to salt away the clock and refuse to relinquish possession of the football over the final five-and-a-half minutes of this closely matched, hard fought game - is absolutely one of the most integral parts of Seattle's organizational philosophy. Pete Carroll, Tom Cable, John Schneider and Darrell Bevell have all talked at length about Seattle's philosophy of physically and mentally wearing down an opponent, playing punch you in the mouth football, and playing your best football late in games and late in the year.

A couple of missed blocks immediately on this inside-zone look from Seattle. Breno Giacomini whiffs on Charles Johnson (it almost looks like a miscommunication of roles here, as Breno fires outside and fails to see Johnson move inside. The Carolina star defensive end, who is playing heads up on the tight end in this front, shoots underneath Giacomini, coming all the way across his face in the blink of an eye, and this disrupts the path Lynch should have been taking up the middle. This forces Lynch outside toward the sideline and he loses three yards in the confusion.

On second down, Seattle dials up their trusty and seemingly indefensible play-action Spider Y Banana call. Wilson reverse pivots, fakes the handoff, and hits Derrick Coleman just past the line of scrimmage. Marshawn lays a key block on Greg Hardy to keep him out of the passing lane. Coleman reels it in, breaks a tackle, and picks up a huge 12 yards to make it a manageable third down and short.

As Jimmy pointed out earlier this week, one of Russell's weakest areas is backed up near the goal line, because he has less room to move around and scramble, and cannot take as deep of drops in the pocket.

Getting out from inside the five yard line proves to be huge on this play.

Seattle comes out on third down in '11' personnel. Doug Baldwin and Zach Miller stack release on the right side of the formation and Doug settles in underneath. Luke Kuechly smartly covers up the passing lane to the zone that Baldwin has settled in, but Doug sneaks behind Kuechly quickly and drags across the field. Wilson hits him in stride and he picks up a first down. Smart play by Doug, and a nice job by Wilson to be patient enough for him to break open. 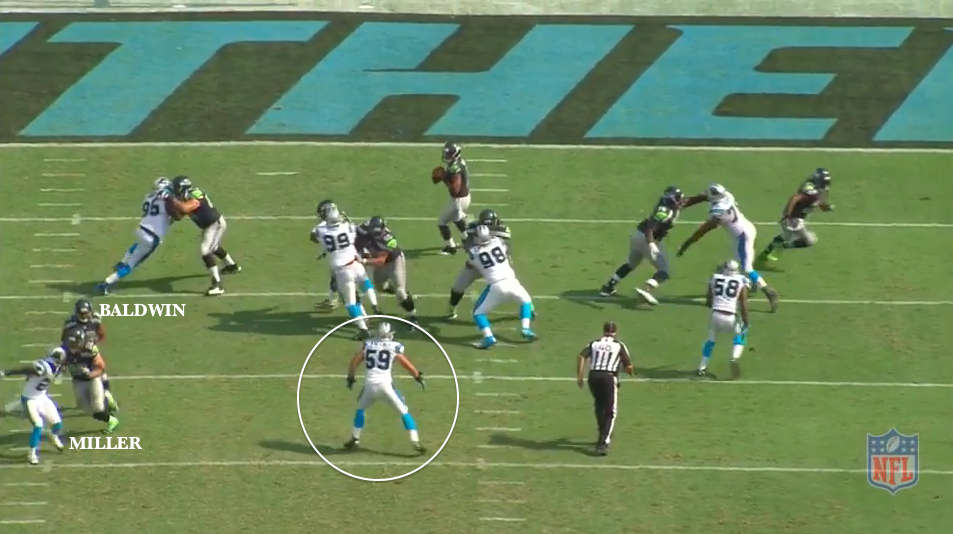 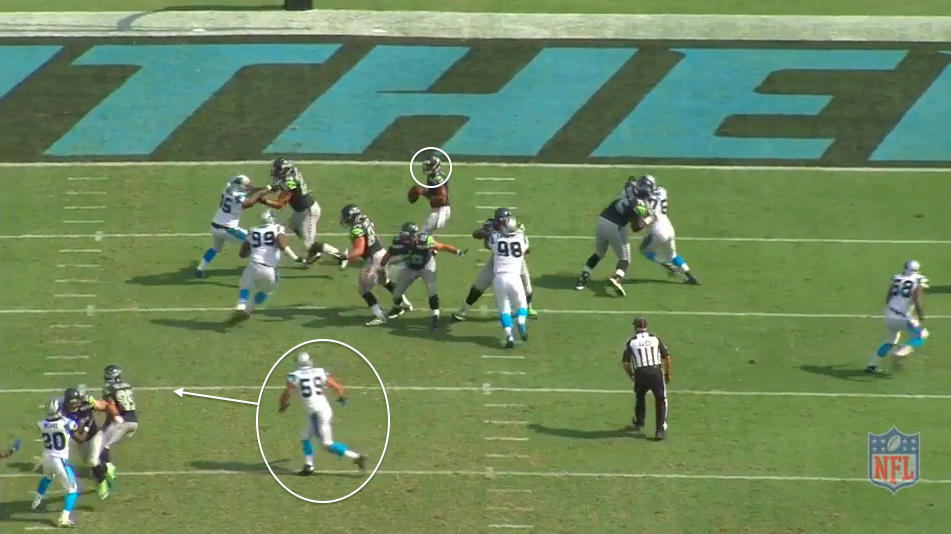 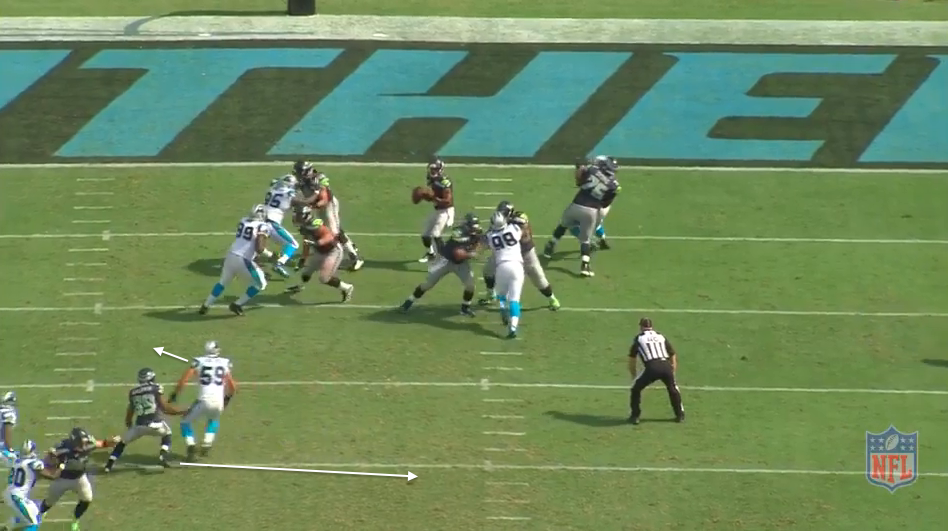 Note that Kuechly's momentum carries him to the left, so Doug sprints to the right. Great play by Baldwin. Nice work by the O-line in creating a passing lane as well. 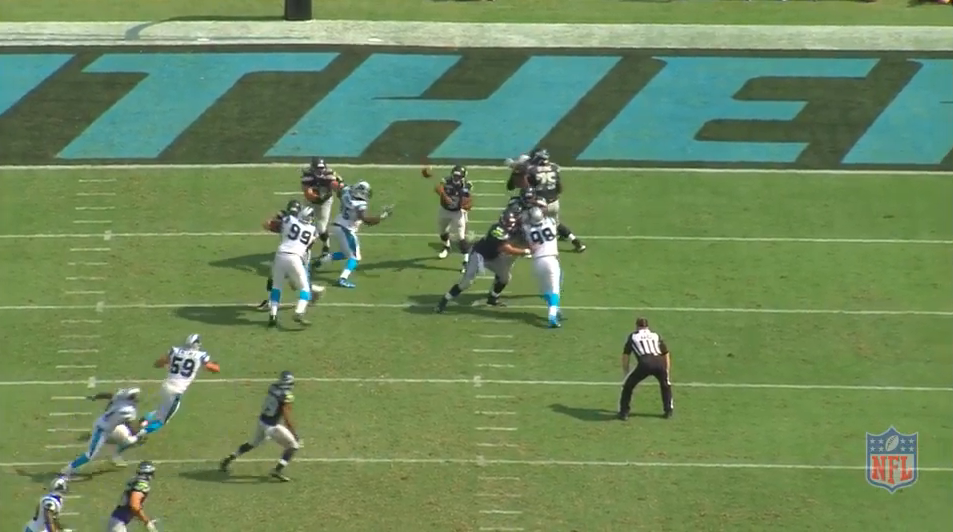 I-formation run off right guard here, and this is one of those plays we've been hearing about in which Derrick Coleman delivered an excellent lead block. Coleman, first through the hole, blows up Jon Beason and clears the path for Lynch, who picks up two. A modest gain, obviously, but at least it's going in the right direction.

Sweezy, pulling downfield after helping briefly with Max Unger, misses the block on Luke Kuechly, who stops Lynch just past the line of scrimmage. Sweezy probably would have been better staying on his feet but tried to lunge at him a bit.

This might be my favorite play of the entire game. Without going back to all the posts I've written on positional and formational versatility and the different things Seattle can do with their personnel, suffice to say that in this case, Seattle motions Golden Tate into the backfield as a de facto fullback, and they run essentially the same play in which Coleman picked up 12 yards earlier in the drive, except with Tate, a much more shifty and elusive runner.

Brock Huard broke it down in his first "Chalk Talk" video of the year, so watch below before continuing.

Lynch picks up 5 yards here on first down out of a 'read-option' inside handoff look. 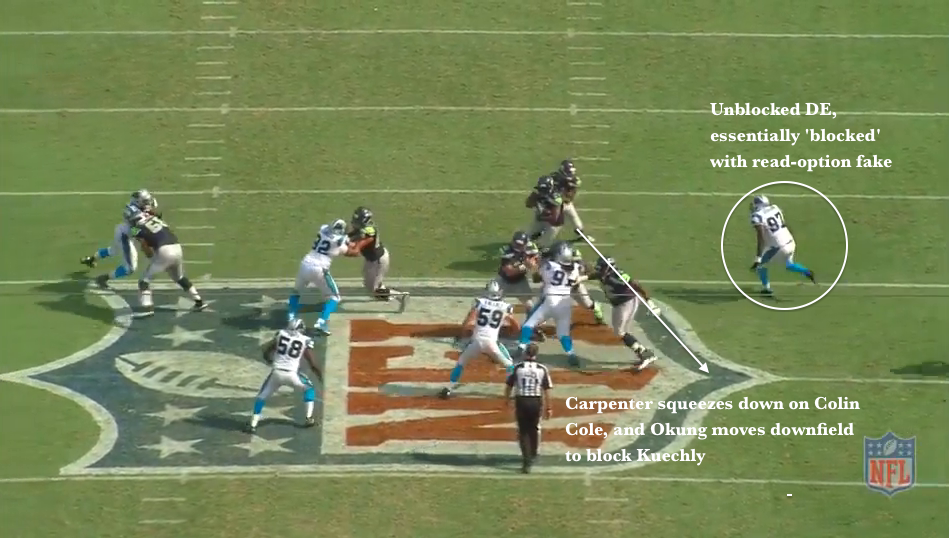 James Carpenter and Max Unger combo-block on Colin Cole, and Russell Okung moves downfield to seal Luke Kuechly. This opens up a nice lane for Lynch to run through.

2nd and 5. Why not keep going back to the things that work? Hey by the way, it's noteworthy here that Marshawn Lynch picked up free rushers on every single one of these plays. That's a big, big deal. Lynch is so good.

Coleman goes out of bounds here - a big mistake - but the first down is still a big deal. These things - knowing the situations and what to do in said situations - come with experience.

Kuechly does what he does. Huge play, penetration from behind the line to bring Lynch down.

Aaron already broke down this play so I'll let you go back and read that again - Seahawks seal game vs. Panthers by reading the rookie defensive tackle.