Throwing into an open hangar

Share All sharing options for: Throwing into an open hangar

A win is a win. Catechisms exist for a reason, because they make the teaching of potentially complicated and nuanced beliefs simple enough to apply to most situations. They collect a negative connotation when used to blindly defend more nuanced scenarios because in those corner cases blindly using catechisms is trite and naive. Even the youngest and most novice among the twelve understands that this win is not the same as the Buffalo win. It wasn't comfortable. It wasn't relaxed. It wasn't a lean-back-in-your-recliner-trying-to-set the-over-under-on-which-spot-Wilson-will-occupy-on-Primetime's-list-this-week kind of win.

This game felt like butterflies the entire way, and it left an unsettled feeling in the fanbase that none of us like. Thus we reassure ourselves with tautologies and mantras about how every win counts and there aren't style points in the NFL. I don't like that at all, because that stuff doesn't work on me and I still have this unsettled feeling, and nagging doubts. I hate nagging doubts.

I study the game and watch coaches film because it does more for me than anything to help confirm or reject that subconscious unease. In the end I did just that and, thankfully, in the case of Sunday's game I came away from my second viewing much calmer than the first.

Coming away from this game I had the impression that it was 75% dumpster fire and a piece of Wilson-esque brilliance in the end, but this play from the second quarter stuck out and was all the confirmation I needed to put away the doubt and keep on believing.

This play in itself isn't particularly innovative. There are two straightforward route combinations designed to exploit defenses running a vanilla coverage scheme. These are concepts I expect to see in a 2-minute drill.

The left combo is designed to stretch a zone look in two directions. Sidney's route is very shallow and crosses in front of multiple horizontal zones. Miller's vertical route is designed to attack the vertical seam and either pull the safety down or deepen the Mike. Miller would be the primary read, Rice the second and the releasing flex back is the checkdown. 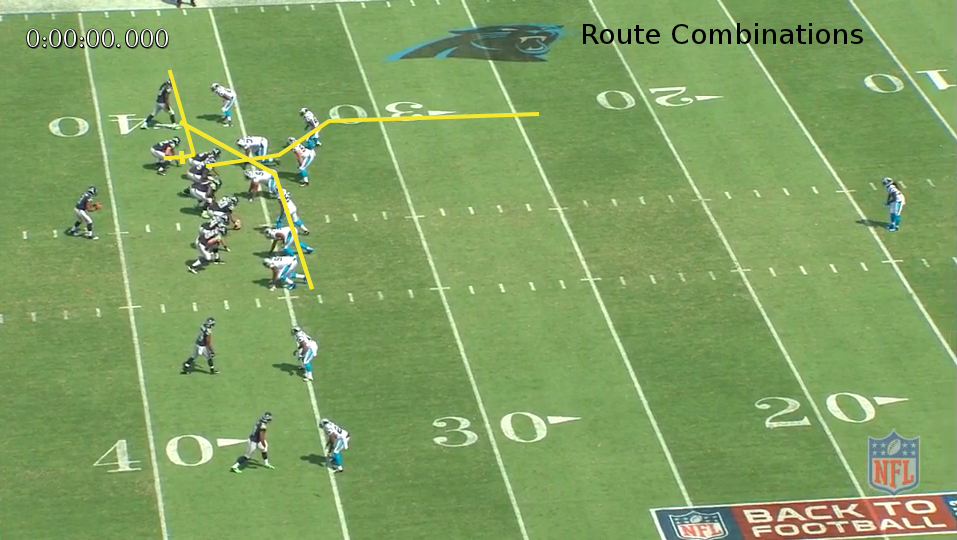 The right side combination is a rub concept designed to defeat man coverage. Tate runs a slant while Baldwin attacks his man. The hope is that the slot defender backs into Tate's lane enough that Baldwin can run a wheel route while the defender doesn't have a recovery angle.

The one interesting thing I see from Tate's route is a hint of how this was drawn up to work against a zone. It appears from the way his helmet turns that he reads the safety first and then checks the Mike. I suspect this is an option route that becomes a cross against zone and a post/go against man, or a really long developing pivot route in case Wilson scrambles free. 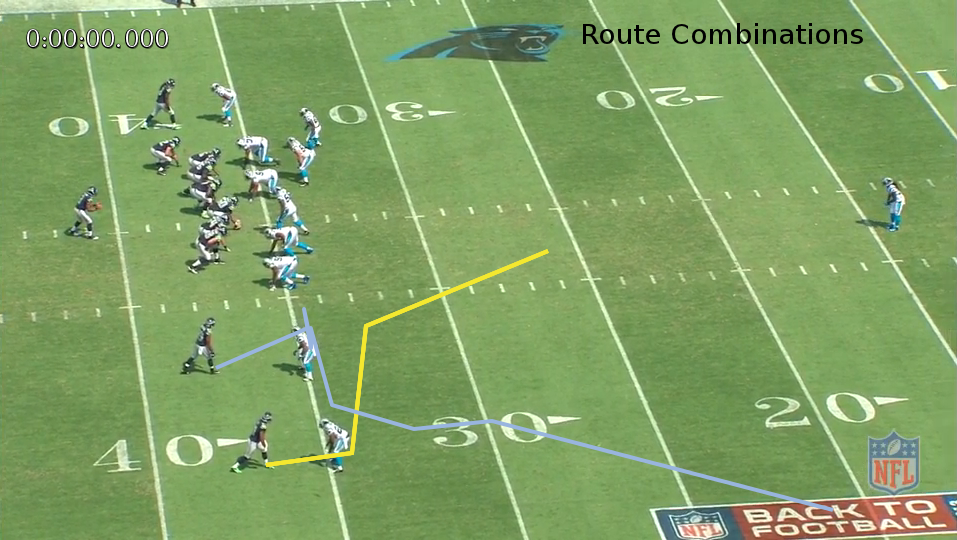 Here is something I hope to see more of once we get more coaches film of real games. It looks like El Bevell, which is spanish for The Bevell, is building bootleg route concepts into the end of his stems. Imagine for a moment what this play looks like if everyone is covered and Wilson breaks free to the field side of the ball. There are 3 receivers on different vertical levels with room to work back to Wilson or toward the sideline. More on this as the season progresses.

All of that ends up being null and void since the coverage is so weak. The presnap read shows cover-1 press with all the subtlety of Miley Cyrus. If that read holds Wilson's job is to hold the free safety in the middle of field while reading the progression of Baldwin to Tate to Miller. That read did indeed hold. It held so well that they may as well have just put the defensive play call on the jumbotron.

Tate does an excellent job of executing his pick rub and not drawing the flag. As an aside, Tate has displayed some veteran savvy in the last 8 games that just wasn't there at the start of his career. Tate allows the corner covering him to set the pick for him with the jam. Notice how he doesn't dip his shoulder and fight upfield, but allows the contact to carry him into the nickel corner. That kind of progress denotes good coaching.

Wilson was playing with confidence on this drive. He makes a decisive throw before Baldwin is able to achieve any separation. He trusts that Baldwin will be able to locate the ball and adjust accordingly. With the safety playing 25 yards deep this throw is essentially taking what the defense is shoving into your pockets. 24 quarterbacks in the NFL make this throw every time.

With a hole in the defense that obvious it becomes tricky to show everyone how awesome Wilson really is. Mind you that won't stop me because you can see the difference in how little Baldwin has to adjust his speed. With a subtle hitch step 89 is able to catch the ball in stride and in position to make an inside cut. If the safety takes a bad angle this drive play finishes in the endzone. About the only thing that went right with this play for the Panthers, is that the safety took a direct line to the sideline and didn't overpursue.

It's a long season boys. This wasn't the dominant shellacking that we all wanted to see, and it didn't feel pretty, but we beat an underrated football team on the road in their home opener. We didn't sneak this one out, or escape by the skin of our teeth. We dominated the fourth quarter and burned the last five minutes of the clock without any need to score. 12 points isn't a lot, but as Milton Berle used to say, "I only pulled out enough to win" and in the end a win is a win.