The Seahawks sacked quarterback Colin Kaepernick three times on Sunday night. Not that bad of a number, all things considered, especially when you compare to the four turnovers the Niners committed on offense and the three points they managed to put on the scoreboard. Simply put, Kaepernick did not had a steady pocket presence during the entire game, was constantly harassed by the Seahawks' defensive line, and this led to the worse performance of his career. Still, it's somewhat perplexing that Seattle only managed three sacks, or two if you don't count the fantastic diving shoestring tackle/trip Michael Bennett made.

As I have written before (and as Josh broke down last season as well), interior pocket pressure has been the key to a lot of success in taking down quarterbacks in the backfield, especially those who rely on the quick gain, timing and the WCO, and the Seahawks have shown a lot of that with a consistent, if not improved rotation of Clint McDonald, Brandon Mebane, Michael Bennett and D'Anthony Smith.

However, as the league evolves into favoring more mobile playmakers at the quarterback position, the natural progression of the pass rush has been redefined again to a new extent. It seems now that, while interior pressure is still a large component of creating tackle for losses, keeping outside contain and rush is just as important in preventing a loss of yards into a scramble for a first down.

Take a look at this play here. It's currently 2nd and 10, and the Seahawks are lined up in a 3-4 front, with OLB Malcolm Smith playing down as the right defensive end and Red Bryant shifting down towards a two-shade (head up) on the guard. Right before the snap, the strong safety, Kam Chancellor, sneaks up to the line of scrimmage and prepares his blitz. In total, the defense plans to rush five players here, which forces one-on-one match-ups between the trenches that the D-Line can take advantage of. 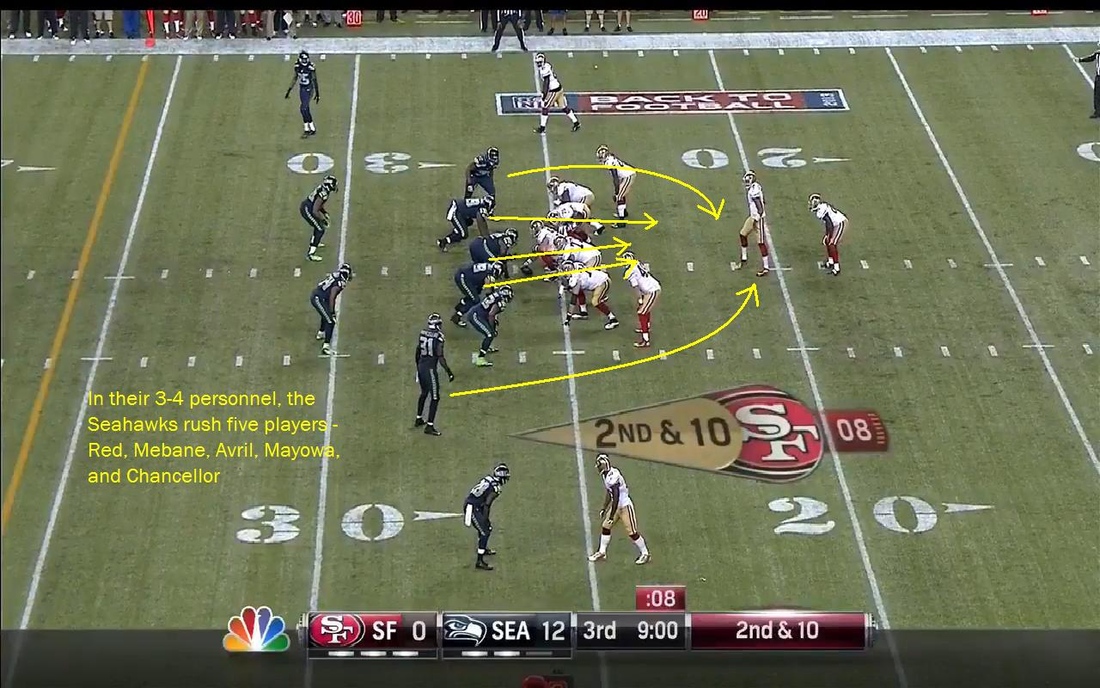 As Kaepernick begins to drop back, we clearly see how the Niners plan to defend themselves from the oncoming rush. The tackles naturally focus on the outermost men, with OLB Malcolm Smith being blocked by LT Joe Staley and LEO Benson Mayowa being taken care of by RT Anthony Davis. The two interior lineman are then equally divided up between RG Alex Boone, C Jonathan Goodwin and LG Mike Iupati. RB Frank Gore, behind in the pistol, will check off on SS Kam Chancellor should he come on a delayed blitz.

Within the first step, Iupati, who is on a one-on-one matchup with DE Red Bryant, is already losing balance and about to tip over on the ground. Meanwhile, DT Brandon Mebane is doing a good job of attacking Goodwin's outside shoulder and quickly gaining leverage. For a while it seems like his teammate on the right, Alex Boone, will help him out, but Boone's taught in this blocking scheme to give help towards the outside, leaving Goodwin alone for a matchup he is about to lose. 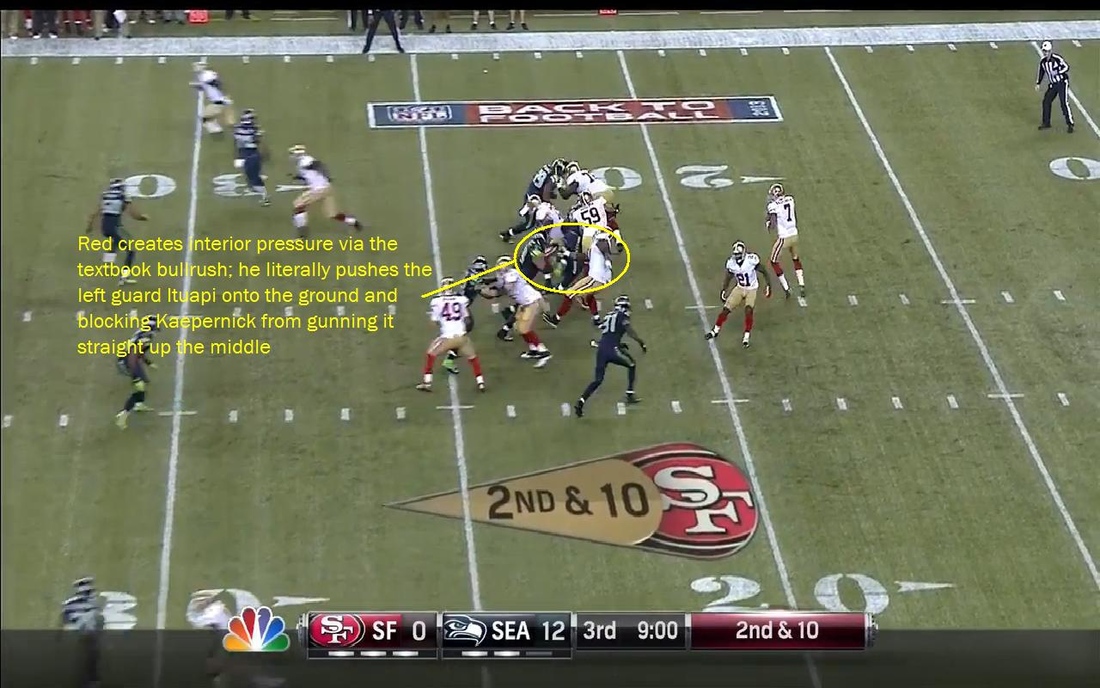 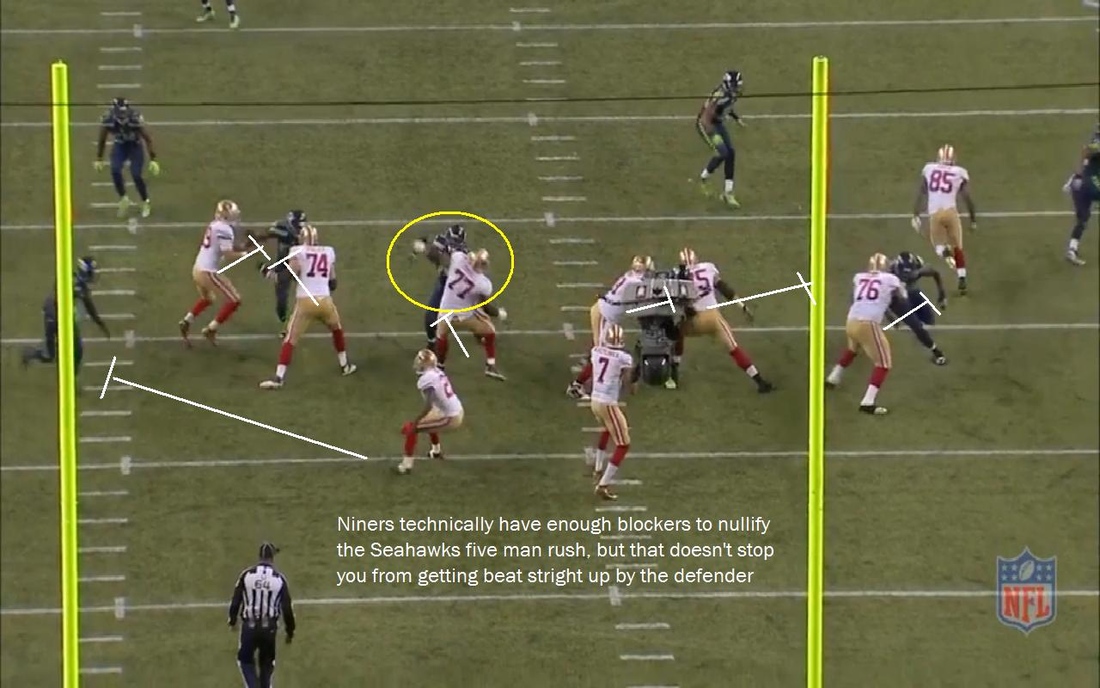 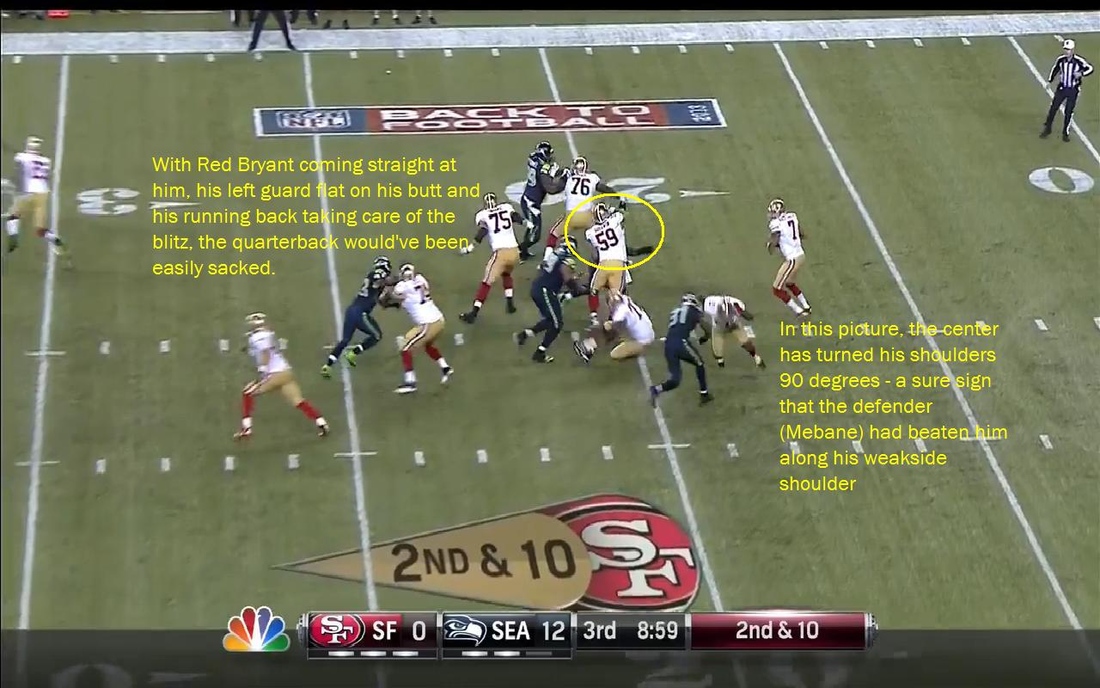 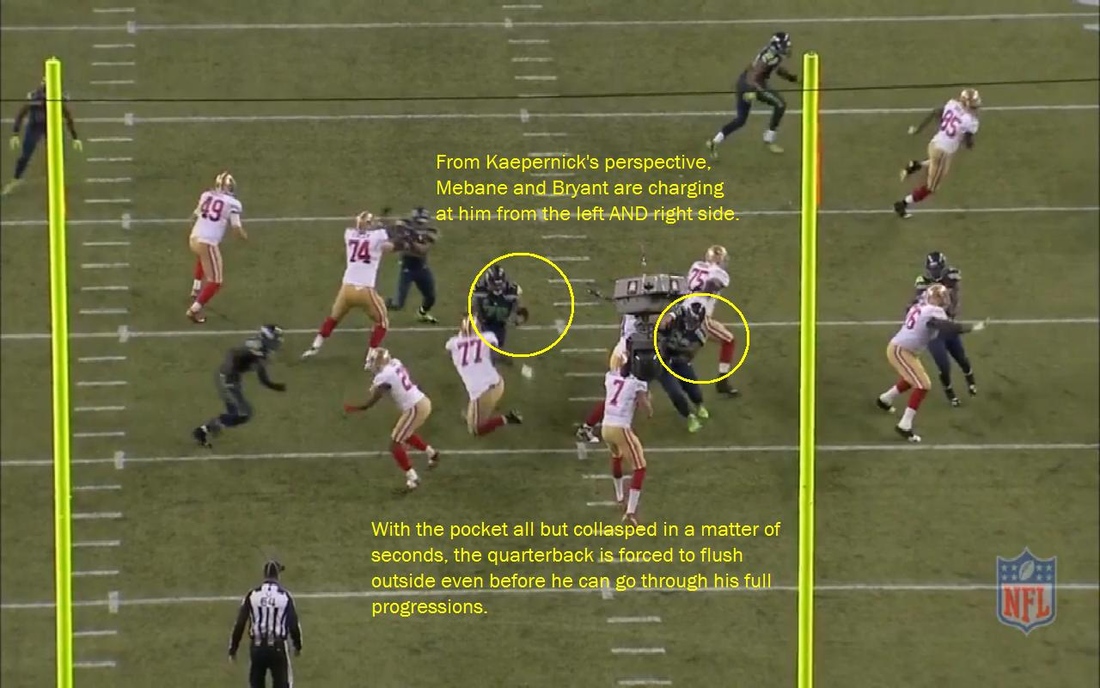 Now here's where everything falls apart, and why the Seahawks have a problem with their pass rush. With the pocket all but collapsed by the interior, Kaepernick needs to keep the play alive only by moving out towards his left or right side. Had there been a consistent presence and rush made by the two outermost players, the result would've been a sack.

Instead, Chancellor is effectively taken out with a nice block from Gore, giving his teammate an escape route to go through his receivers and throw the ball to his fullback for a first down. On the other side, Mayowa is practically stonewalled by Davis and doesn't even come close to pressuring Kaepernick. 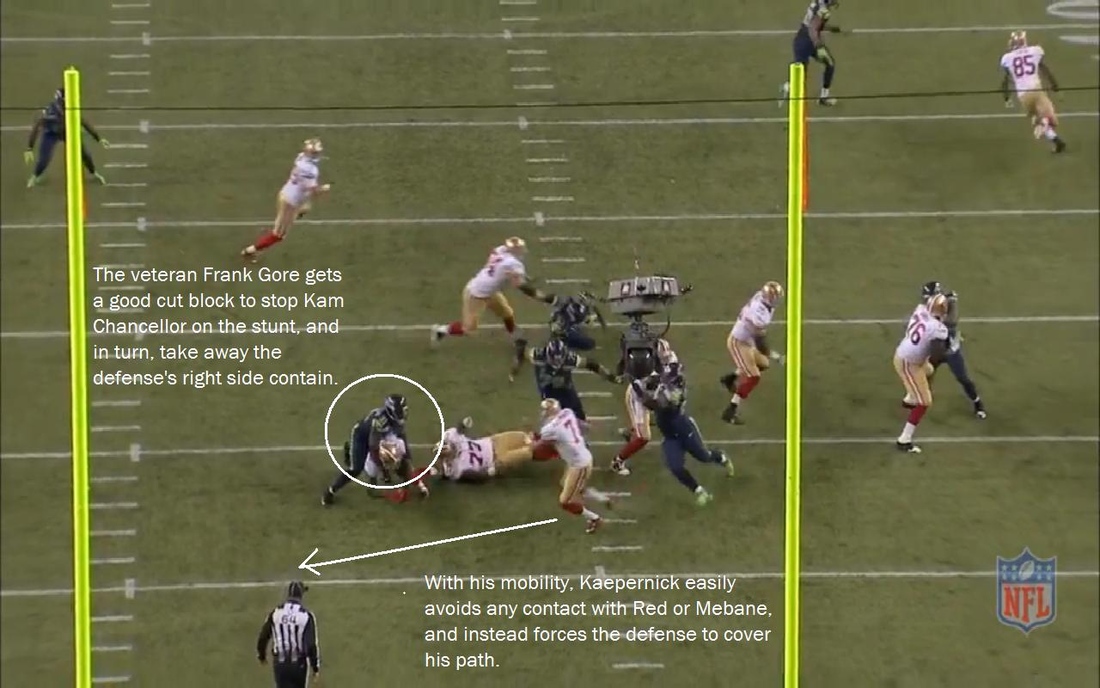 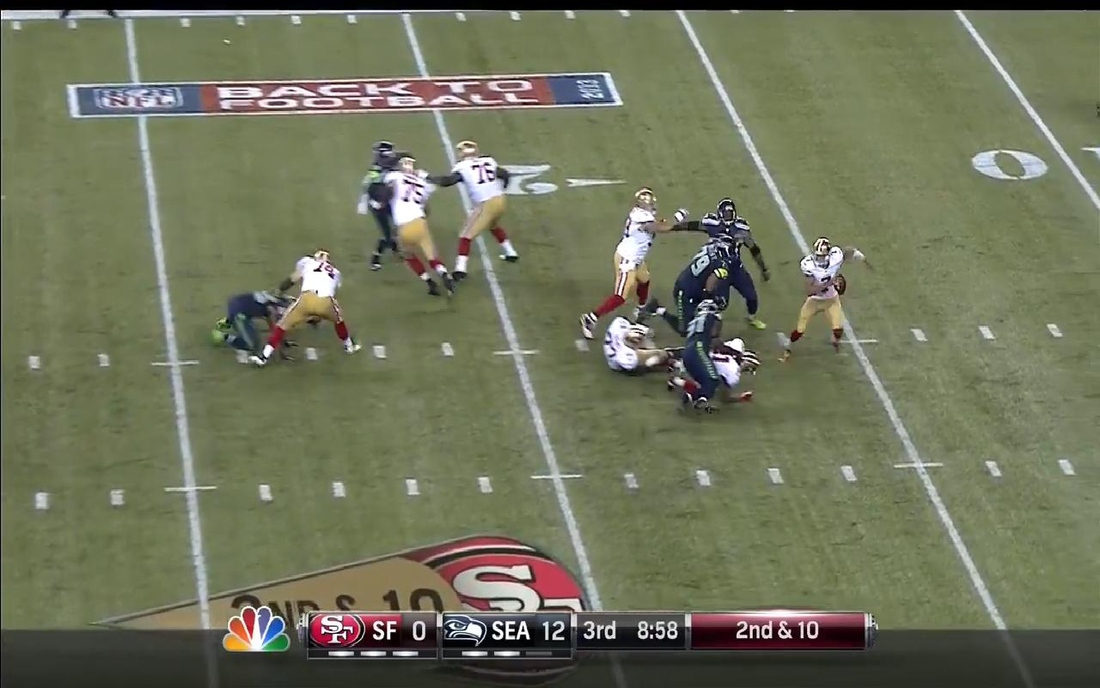 Now for a team that had been missing their sack leaders from last year - Chris Clemons and Bruce Irvin - the Seahawks outside pressure and LEO play has naturally been suspect. But the fact remains that the problems of a lack of pass rush has seen dramatic improvement since the days of relying on Jason Jones and Jaye Howard. If anything, Dan Quinn's ability to draw up creative blitzes and pressures has helped solve that problem, so much so that we know how it works. All we have to do is wait until the results naturally comes.