Seahawks vs. Saints, NFL Divisional Round Playoffs: Scheming open - how the Saints can use Jimmy Graham

Share All sharing options for: Seahawks vs. Saints, NFL Divisional Round Playoffs: Scheming open - how the Saints can use Jimmy Graham

I aim to misbehave please.

As a Seahawks fan, one thing I've been delighted to watch is how Pete Carrol's new look defense has handled the ever evolving role of TE's in the NFL game. For my money, Vernon Davis is the best TE in the league (please don't repeat that on Niner's Nation) and we get to see him twice a year. But we've also gotten to watch Rob Gronkowski, Aaron Hernandez, Jimmy Graham, and a host of other top tier players.

Graham was largely ineffective when the Saints came to Seattle earlier this year. In preparation for our rematch this weekend I thought it would be interesting to look at why that was, as well as get a feel for some things the Saints can do to attack Seattle's pass defense.

You may think that looking at the Saints offensive playbook is the way to start, but it really isn't. In order to understand how offensive plays work and what they're designed to do, you must first understand the defenses those plays are supposed to beat. If you're already familiar with the cover 3 and man-free, go ahead and skip a few paragraphs. 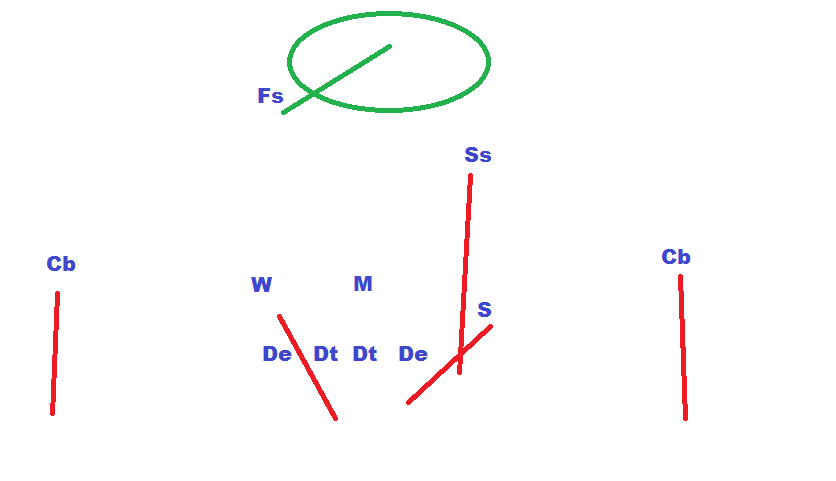 The coverage diagramed above is called "Man Free" (Man coverage with the Free Safety playing zone) or Cover 1 (1 deep safety, man coverage is implied by name). The strength of man free is that there's always a "hat on a hat" and everyone's job is always very clear. The weakness is that if the offense can generate a personnel advantage (say K.J. Wright trying to cover Rob Gronkowski), there's not much the defense can do about it. You need VERY specific personnel to play man free, and they have to be incredibly talented, even by NFL standards, since there's very little room for mistakes.

The Seahawks have the talent. While I don't have snap-count analysis, I would estimate we play some form of man-free on approximately 1/3rd of our defensive snaps, particularly when we're blitzing. 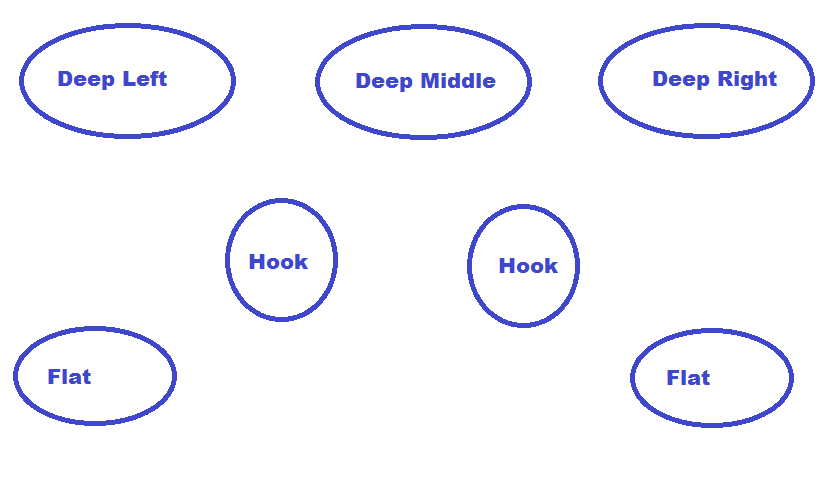 This is the zone based cousin of man-free, the cover three. Three defensive backs populate the deep zones (generally 2 CBs and the FS) while the shallow zones are generally filled by 3 linebackers and the strong safety. A favorite of Pete Carrol's, it allows the Seahawks to bring Kam Chancellor into the box on every play to stuff the run, while still having a lid over the top to prevent big plays. This coverage is the backbone of the Seahawks defense, and I would estimate that we use some form of it on 50 to 60 percent of our defensive snaps!

If you're not a math wiz, this means that Cover-3 and Man Free together should account for somewhere around 80-90 percent of defensive snaps, provided my estimates are correct. The Saints should have a pretty darned good general picture of what the Seahawks D is going to do on most snaps. Now we're ready to talk about plays the Saints might call, and how they're designed to beat the two coverages outlined above. 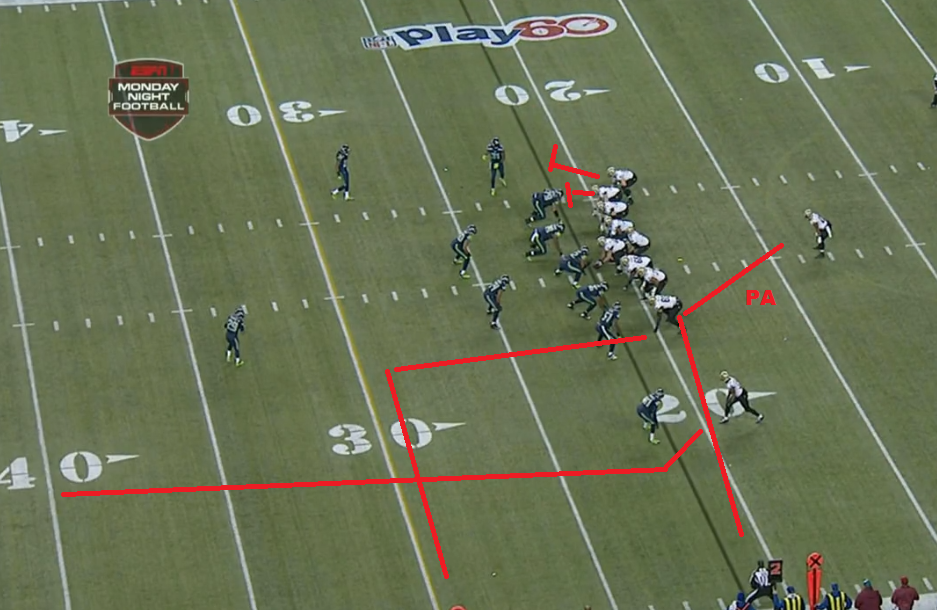 This play uses something called the "Levels" concept. If you look back at the cover three picture, you'll notice there are two zones (and thus two defenders) along each sideline.

Former offensive coordinator Sid Gilman once famously observed that 4 defenders can't even cover 5 garbage cans provided they're spaced adequately far apart. This play uses the same principle on a smaller scale. With only two defenders on the left sideline and routes to three different levels, somebody is going to be responsible for defending two different players. The worst part is that whomever he choses to defend will be wrong. It's akin to how the read-option works. The DE can crash the line after the RB, or he can set the edge against the QB. Whichever option he choses is wrong every time, because the offense reads him and the ball goes in the opposite direction. 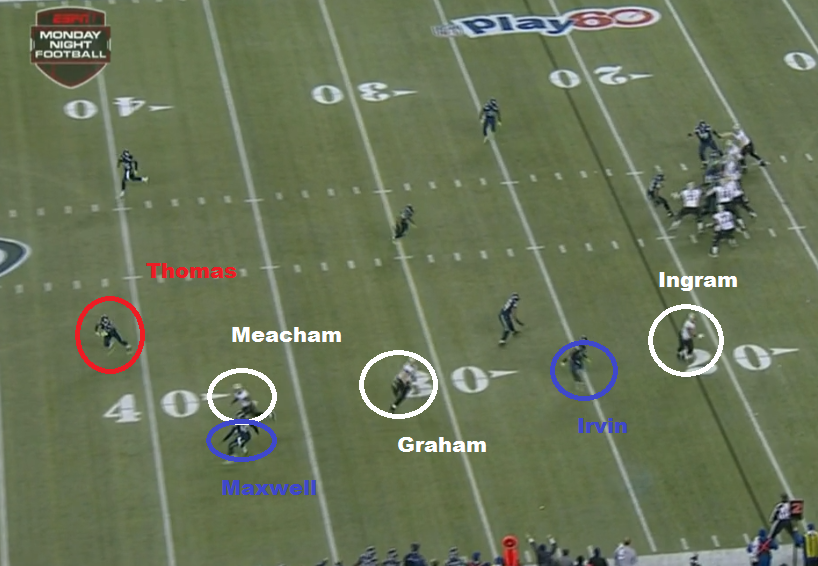 It's quite easy to see the three vertical levels and two defenders in this still.

The first player Drew Brees is going to key on when making his read is CB Byron Maxwell. In all forms of man and most versions of the cover 3 Maxwell is going to go downfield with Robert Meacham. With Earl Thomas rotating playside to sit on top, that route's dead.

If the If the Seahawks are trying something exotic and the corner plays a short zone, the WR has a sight-adjustment to the deep-out. Brees should throw a toe-tapper. Simple geometry dictates that the FS has no chance at stopping this completion, even if he's as fast as Earl Thomas. It's a difficult throw and catch, but the Saints are going to hit it very reliably when it's there.

As you can clearly see in this picture, Maxwell has his hips flipped and is running downfield with Meacham. The deep route's dead. The second read is the flat defender Bruce Irvin. Irvin is in a hi-low bind. If he covers Graham, Ingram comes open. If he covers Ingram, Graham comes open. Both players are in his zone, so technically it's his fault either way. It's the Kobayashi Maru of defensive football.

In this case, Irvin was sucked forward by the play action fake, and Graham is wide open.

Incidentally, had the 'Hawks been playing Man instead of cover 3, the pass would have been going to Graham or nobody. You'd still see the deep route double-covered, and Wagner (the Seahawk near Irvin) would be in much better position to shut down a pass to Ingram.

Seahawks fans know that Bruce Irvin is a freak-of-nature athlete blessed with absurd speed and change of direction skills for a man of his size. In fact, he measures up very similarly to ... wait for it... Jimmy Graham. (seriously, go look up the combine numbers for both players). But for most linebackers in the league, trying to cover Jimmy Graham 1 on 1 in space is a virtually impossible task.

What happened during this play is Bobby Wagner drifted into the throwing lane. Consequently Brees put enough air under the ball to keep it above Wagner's head. The slower trajectory allowed Irvin to turn around and catch up with Graham, jarring the ball lose with a vicious hit from behind. 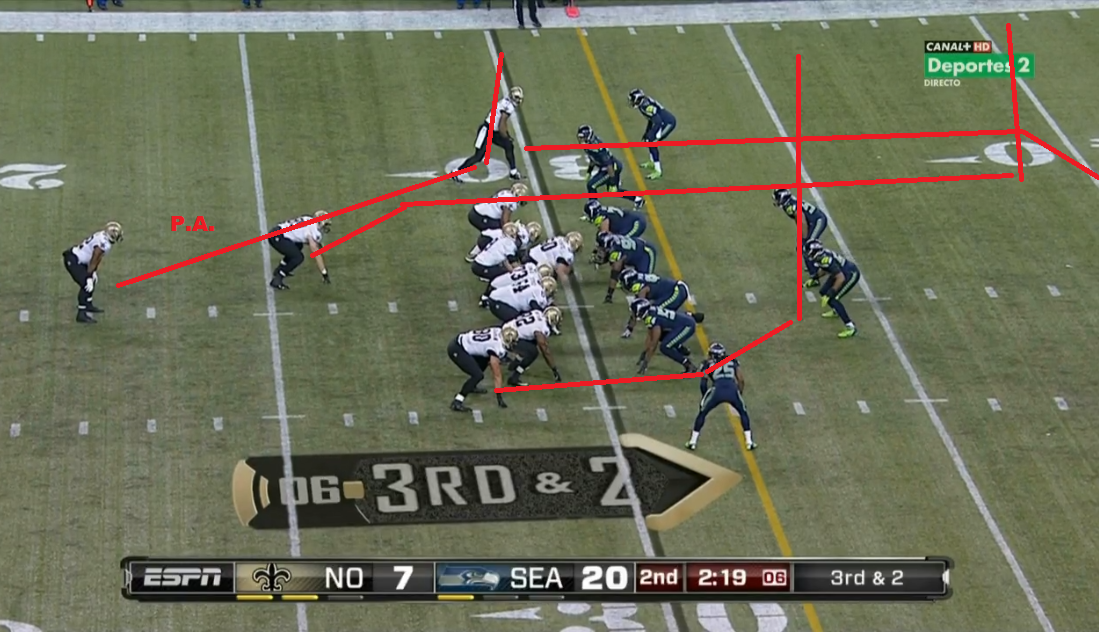 Jon Gruden once observed during a Saints-Colts game that Manning's Colts beat people via superior execution. They ran the same small handful of plays in every game all season long. The defense couldn't stop it even when they saw it coming. Sean Payton's saints meanwhile beat people by constantly adding wrinkles and layers. Even if you've seen a concept before, it will look like something different the next time they show it to you.

For example, the play above has the exact same play-action Levels concept we just looked at. But it looks very different because the WR on top is running a post pattern, and the intermediate route is the TE drag that has to come from across the formation.

The addition of a WR post isn't just cosmetic either. If the corner doesn't exchange with the FS very quickly (he didn't) he won't be in position to cover the deep out.

Notice in the picture how the corner and safety are both sitting on the post, leaving the deep out completely empty. All three Seahawks LBs can probably out-run rookie TE/H back Josh Hill, yet he's still got 5 yards of clearance and room to go downfield.

This play was designed to go to Hill and not Graham, but it would be easy to draw it up differently and have Graham as the designated target. In fact, the Saints probably wish they had done so. HHill dropped a pass that Graham almost certainly would have come down with.

Levels, (and variations thereof) are not the only ways to attack the Cover 3 with a TE. The final play we're going to look at today comes out of the Seahawks own playbook. 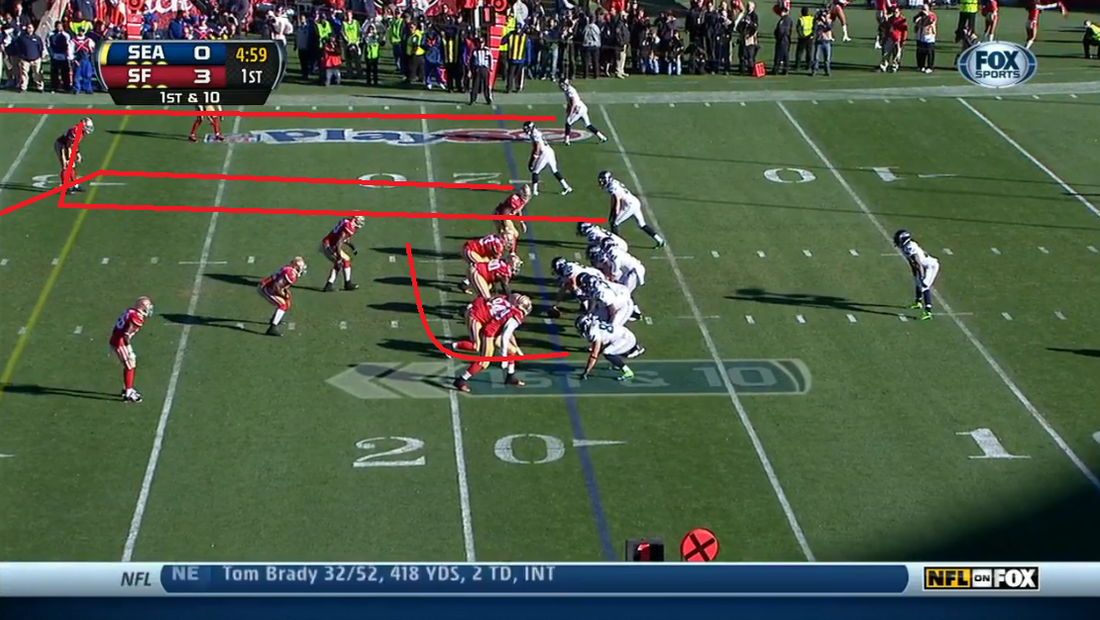 Coaches often attack the Cover 3 by putting three vertical routes on the same side of the field. With only 1.5 deep zones, (and thus 2 defenders) it's not possible to cover all three routes. The most typical reply by the defense is to have the flat defender (often a nickel corner against 3 WR looks) drop with the deep routes and cover the first one to break towards the sideline.

The Quarterback's first read on this play is the flat defender. If he goes deep, by definition he's not in his zone anymore, and there's an easy completion to the TE in the flat. If he stays home, the deep out comes open behind him. It's a hi-lo bind exactly like in the Levels concept, only it's set up by a different route pattern.

If the flat defender sticks in his assigned zone, the second read is the cornerback. He *should* cover the fly, leaving the deep out open. But he could be an idiot and jump the deep out. This leaves the Safety with the deep post and the deep fly. whichever one he doesn't cover is an easy touchdown.

When watching the gif, it's important to recall that the 49ers aren't in a Cover 3, so the 'Hawks defense will move differently as soon as the ball is snapped. What is particularly interesting to note is how the weakside pass rush takes two guys out of coverage completely, leaving 4 routes to that side of the field and only 3 people in coverage. Oopsie!

You'll notice that all three of the plays I highlighted have a vertical stretch in them. This wasn't an accident. While Sean Payton rarely calls the exact same play twice, he re-uses the same themes over and over again. When trying to scheme Graham open, putting a defender in a hi-lo bind is Payton's go to concept. It's easy to notice if you're looking for it, so keep an eye out when you watch the game tomorrow. 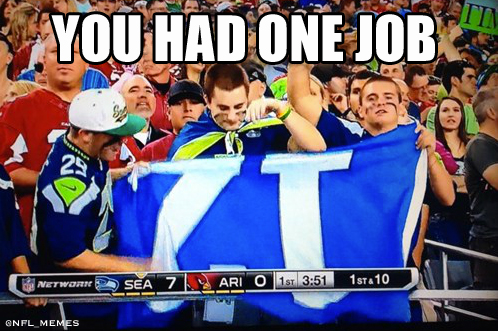