Allegedly, the 49ers have one of the league's best defenses, even if the 'Hawks did shred it for 29 points last time it was in town. Can the Seahawks continue their domination of the 49ers in the Clink on Sunday? With a trip to the superbowl on the line, here's a few ways the 49ers can be attacked.

Share All sharing options for: Scout's Honor: A look at the 49ers' D

In The Fellowship of the Ring an unlikely band of 53 heroes came together on a quest to garner One Ring. The first of many that would head to Seattle, but the first is always the most important. This would truly become the One Ring to rule them all. In the Fellowship, the Dark Lord of San Francisco sent his emissary North to do battle and it was vanquished. Utterly and completely did the Bicep flee back to his home.

In The Two Towers the Lords of the West pursued their foe even into the foul reaches of Candlestick. But evil (much like life, according to the movie Jurassic Park) will always find a way. For the angry one had begun work in secret erecting a second tower named "Levis". His troops, inspired by the erection of his Levis, were victorious. The Northern Host was defeated on that darkest of days.

In the Return of the King The little person of the Northern Kingdom has staked his claim to Kingship of Gondor The NFC. A title jealously disputed by the Dark Lord's own champion. The champions armies have once again defiled the Northern Shore, as they attempt to they attempt to take the King's birthright by force.

Will the power of the North prevail on that day? Will the unthinkable happen, and the world descend into a new dark age? Will the Dark Lord of the South come to realize that his true passion is not a sixth ring, but a pink tutu?

Maybe a study of recent history can illuminate the answers to these questions, as well as reveal some of the stratagems that may be favored by the Princes of the NorthWest.

Ahmad Brooks and the Read Option

As I re-watched the Seahawks game down in candlestick, one thing that really stood out to me is how terrified the 49ers were of Wilson running the football. Virtually every passing play, they had a linebacker spying. Sometimes even a safety. But it's the running game where I saw the biggest opportunity for the 'Hawks to take advantage.

But that's how seriously the 49ers take Wilson as a running threat. They'd rather try and stop Lynch with only 10 guys than let Wilson beat them with his legs. Check out the following GIFs.

Worth noting: These two plays were run consecutively. In both of them, Ahmad Brooks (55) comes into the backfield completely unblocked, and takes himself out of the play by ignoring Marshawn Lynch until it's too late. It's not like these are the only two plays where that happened either. This happened pretty much every time the Hawks left Brooks unblocked. Curiously, Aldon Smith, on the left side of the line was generally able to crash quickly enough to impact the running play.

At some point Bevell stopped calling read option plays. My first thought was that perhaps he simply didn't notice the 49ers defensive tendency. My second thought was that maybe he did notice, but chose to file the information away and use it in a higher-leverage circumstance, such as a playoff game. Of course THIS line of thinking quickly devolves into the scene from Princess Bride where Vizzini is trying to guess which goblet holds the poisoned wine. "Ahh, but perhaps Harbaugh was deliberately creating a defensive tendency so he'd be able to change it at a key moment and catch an opponent unawares" Clearly I can not chose the wine in front of you!

If you're wondering where the wine is right now... I have no idea. What I do know is that in the Panthers game just last week, it was still on the table.

Carolina's version of the Read Option is generally very different from what the Seahawks use. However this play is textbook 'Hawks read option, and Brooks defended it exactly the same way he did in San Francisco weeks earlier. Notice how (yet again) the RB gets good yardage by going right into the area that Brooks vacates when he sets the edge.

It's not very important if San Francisco knows about the tendency and is choosing to play headgames, knows and cannot fix it, or legitimately don't know at all. What does matter is until they chose to make an adjustment, the read option should be good for at least 5-6 yards a play.

Noticing this trend in the 49ers run defense also comes with two lessons for the Seattle passing game, believe it or not. The first is that a ZRO play-action fake is almost certainly going to draw Brooks immediately upfield. If he's in the backfield trying to stuff the run, he won't be dropping into his zone coverage. I'd put a TE drag into the game script early, hoping to get Russell an easy 8-12 yard completion and establish some rhythm on offense.

The second lesson for the passing game is that it's unwise to call a naked bootleg to the right hand side of the field. Brooks going immediately upfield is likely to kill any such play before it ever has time to develop.

One interesting thing about the 49ers is how willing they are to put their ILBs Navarro Bowmann and Patrick Willis on an island against an opposing TE. Both guys are incredibly talented, and trusting them in man coverage lets Harbaugh cheat his safety help towards the WRs.

Enter Luke Willson. The rookie has been death to coverage linebackers all year long. Normally, Willson only gets single coverage if Bevell does a bit of scheming with formation and routes, forcing the defense to into a coverage they'd rather avoid. None of that's required against the Niners. Not only does SF not give a damn, single-covering him with an LB was actively part of their game plan the last time these two teams met. 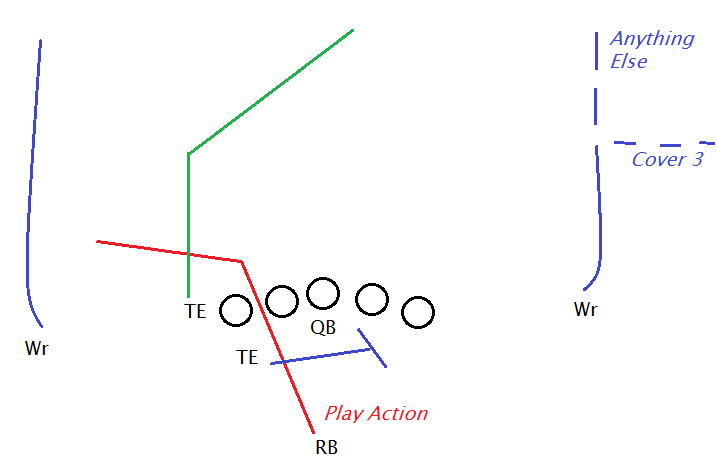 The Seahawks ran variations on this play no less than 3 times during this year's trip to Mordor Candlestick. To see how it works, let's add a defense that resembles what SF plays. 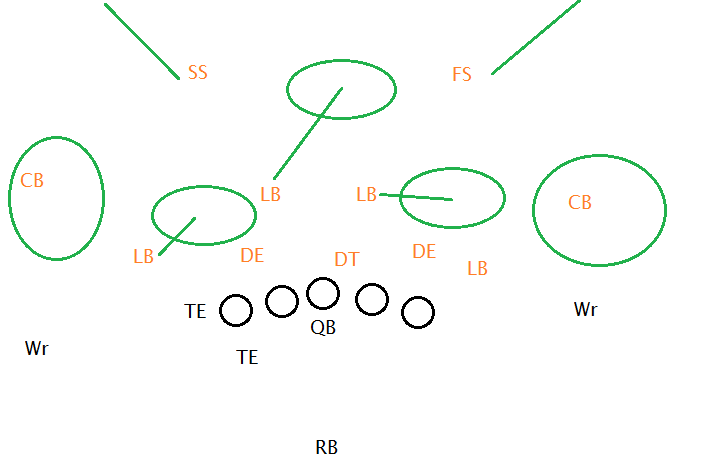 I've drawn a 3-4 playing a generic Cover-2 zone. If you mentally superimpose the two pictures, it's obvious that the deep safeties are going to keep the lid on the deep WR routes, while the TE goes "down the seam" with a linebacker. You'd actually get the exact same results if the D was playing Cover-2 man instead of zone, except the deep routes would have both a corner AND a safety playing them.

Doubtless you're exercising your critical reading skills and have noticed the D in the gif above doesn't match the one I just diagrammed. It's true, it doesn't. SF is using a derivative of the play I drew up that has both OLBs rushing the passer, and the underneath zones stretched a bit to compensate. None of which matter for our purposes. The result of the play is still a hapless Patrick Willis trying to chase down Luke Willson down the middle of the field in a manner that reminds me of nothing quite so much as Wile E. Coyote chasing after a roadrunner. 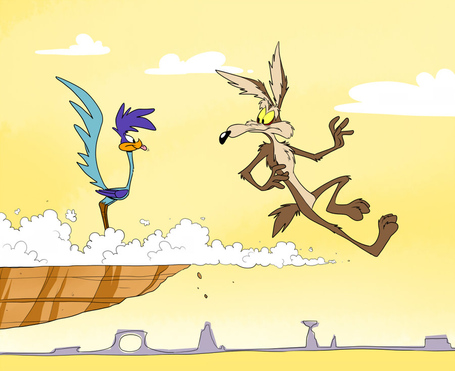 At first glance, you might think it was just a fluke. After all, can you really expect a rookie TE to beat an All-Pro linebacker with any reliability? Especially a guy like Willis who's strength is his pass coverage. But, it had actually happened earlier that quarter:

The offensive look is a bit different, but the route concepts are identical. Two vertical routes by the receivers clear the safeties. Willson runs a simple post route, and burns Willis across the middle.

The Seahawks went back to this concept at least one final time that I saw. However San Fransisco was in a Man-Free look on this third attempt, meaning there was a safety sitting in the deep middle. RW chose instead to throw the ball to Golden Tate, who correctly turned his option route into the deep out.

I would be remiss if I didn't point out that the Seahawks defensive scheme makes it very difficult for Vernon Davis to do this to us. For one thing, Earl Thomas generally patrols the deep middle, meaning that it's never going to be a 1 on 1 matchup there against a linebacker. Also, we have our own answer to TE's attempting to catch the ball.

You could accuse me of writing that last paragraph just to have an excuse to include this gif of VD getting Kamtracked. Guilty as charged.

Here Comes the next Contestant

A few other random observations:

The Panthers only ran a single RB screen last week. That's particularly odd, since they've been one of the league's best and most effective screen teams all season long. My guess? Rivera had a healthy does of respect for the range of the SF linebacking corps. Seattle doesn't have much of a screen game to begin with, and won't start trying to develop one against a team as good as SF.

The Seahawks spent quite a bit of time in the trips set (3 WRs, all on the same side of the field) last game. The results were mostly unimpressive. Doubtless you'll see some trips on Sunday, but most of our 3 WR sets should feature a 2-1 split. The Panthers did this last weekend in order to force Nickleback Perrish Cox onto the field. Ted Ginn Jr was then able to beat him multiple times for big plays. Imagine what a nightmare that's going to be for SF when they have Cox trying to match up against Percy Harvin coming out of the slot! Don't they know it's never going to work?

Travis, did you just troll us with Nickelback lyrics, while talking about a nickel-back?
Yup. And something's gotta go wrong, 'cause I'm feeling way too damned good about it. Don't like it? It's too bad. It's too bad. You probably should give up reading my work, 'cause Baby I was born this way.

Ok... I'm done trolling. I'll leave you guys with a funny picture that ties everything back in with my introduction. No seriously. Look at this photograph. Every time I do it makes me laugh. 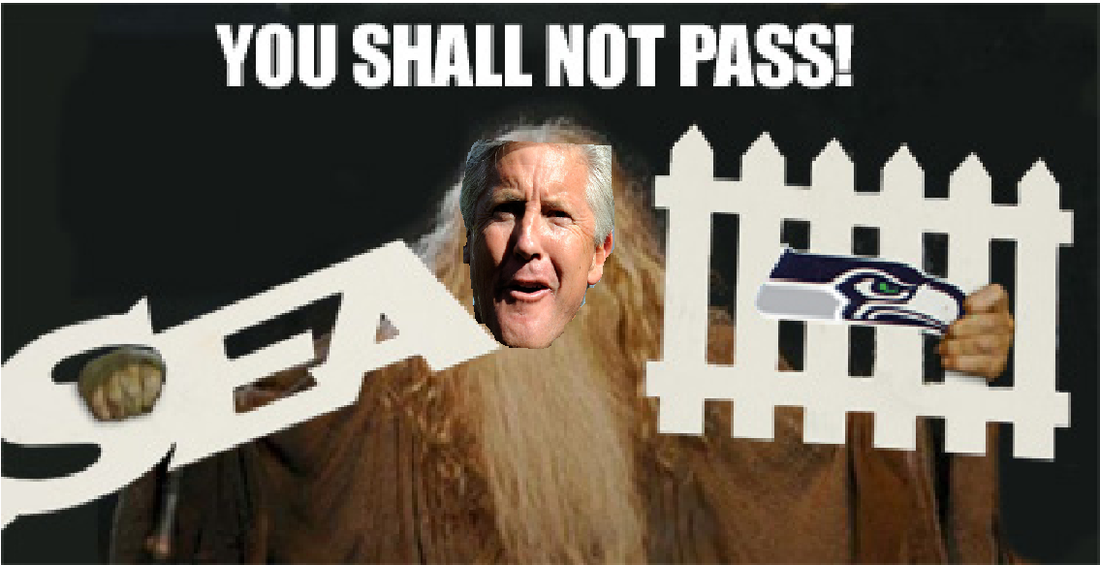 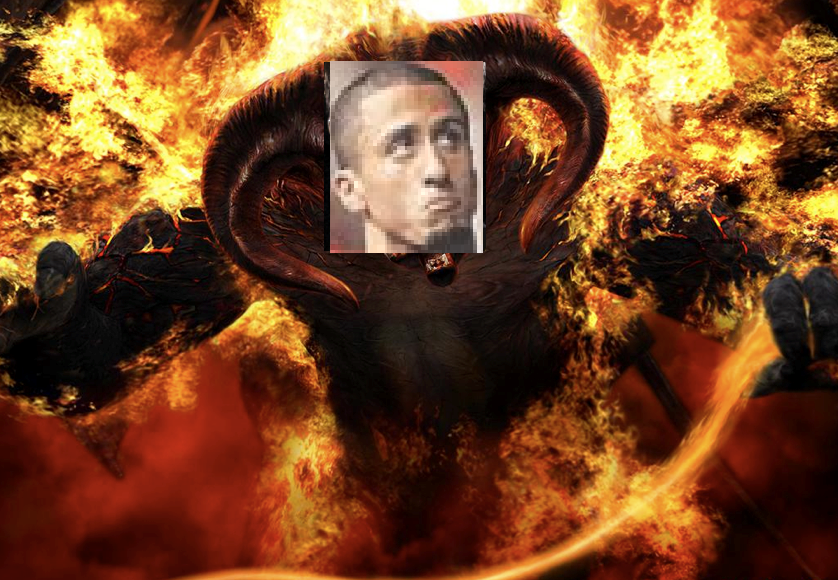