Start with the scripted plays.

There's not much you can find about Darrell Bevell in a Google search. Like many other NFL assistant coaches, his image is clouded in between his boss, the visionary, and the players that take a majority of the recognition. Indeed, what little record he has, between the lines are dotted in the few interviews he gives during practices, and even those transcribe more or less the same rhetoric a politician would give to the media.

The one common thread that we can tie back to Bevell - without a shred of assumption or doubt - is that he is a balanced play-caller. In a league where quarterbacks are reaching forty or more pass attempts in a consistent basis, Bevell has instead crafted the brunt of the playbook around the traditional tailback. Very rarely has the Seahawks asked Marshawn Lynch to carry less than 20 times per game, and in the few times that he had, it either resulted in blowouts or close games and losses.

This promise has led Bevell to many instances of praise and criticism. More recently, Bevell has been targeted by Seahawks fans for the sputtering inconsistencies of the offense, in particular the idea of the passing game and how it has seemingly shifted from "working off to play-action and capitalizing on large gains" to "traditional West-Coast offense routes in the short/middle routes". Of course, injuries and game-planning plays a huge part in these differences, but it does beg the question of what exactly Bevell believes to be his true philosophy, and more importantly, why he bases his play-calling upon those respective schemes.

To start, let me recap a interview Bevell gave in training camps of 2012:

"We want to be a run-first team. We added a second running back in the draft [Robert Turbin], so we still end up having that size, that big strong runner, once Marshawn Lynch comes out of the game. But, I think the important part of the passing game is that it needs to be explosive."

[On the explosive passing plays] "Well, you've got to call them, and when they're there, you've got to be able to take them. You have to take advantage of those 8- and 9-man boxes when you get them. We'll give ourselves more opportunity to do that. I think adding Kellen Winslow helps us do that. You know, stretching the middle of the field, he can take pressure off the guys on the outside. The receivers do have to step up. They're going to have one-on-one opportunities out there, they have to win those opportunities, and you know, obviously the quarterback has to be able to throw on time, he has to be able to throw accurately, and that's something that we're working on and making progress on."

"It's the scheme, number one. We have to put them in positions to be successful. We have to understand what the matchups are. We have to know who we're putting out there, against which defensive back, and which one gives us the better advantage. And, again, call those right plays in those right situations"- From MyNorthwest.com

We have seen how often Russell Wilson takes a shot in one-on-one matchups and trusts his receivers to make the play. Combined with the philosophy that Bevell preaches, and you understand that a majority of the success of those explosive plays from play-action, mismatches upon eight-to-nine defensive players in the box, all rely on the Wide Receivers.

As for the relationship between him and offensive line coach Tom Cable, there's this:

Though he's the offensive coordinator, Bevell's hardly alone in constructing Seattle’s offense. Offensive line coach Tom Cable spearheads the team’s running game while Bevell coordinates the passing attack. On game days, Bevell said "there is a lot of give-and-take there and real open communication’’ as they decide on plays. - Bob Condotta

The difficulty in evaluating Bevell lies in play design. From my philosophical standpoint, the best offensive game-plans adjust and capitalize on whatever defenses allow them. In this sense, there isn't necessarily a bread-and-butter play that Bevell will use consistently as Pete Carroll does in playing Cover 3. In fact, if you're consistently running the same play over and over again on offense, in the same offensive formation with the same personnel, you're probably either playing a horrible defense or coordinator.

That said, I went ahead and charted the play selection for the offense's opening drives on the three occasions we faced the 49ers. I did this for three particular reasons:

1. Opening drives are usually scripted before the game, which means that this is probably the only play series where the Seahawks offense is not responding to the defense. Think of it as a "diagnosis" given early in the game - you're there to scout what looks the defense is giving you, who seems to be hurting, etc. Because of this, we will most likely minimize the probability that the play-call and subsequent play-design were utilized on the spot, and instead more from what Bevell wants to do personally.

2. The Niners have faced the Seahawks three times this season, the most out of any team. In addition, Bevell and the Niners defensive coordinator, Vic Fangio, also began coaching for their respective teams at the same year (2011), so each will have enough previous experience in scouting one another.

3. At the same time, the offensive unit that played in those three games remained relatively similar, with the sole exception being Sidney Rice. Again, more similarity will dissipate the probability of specialized play-calls, etc. 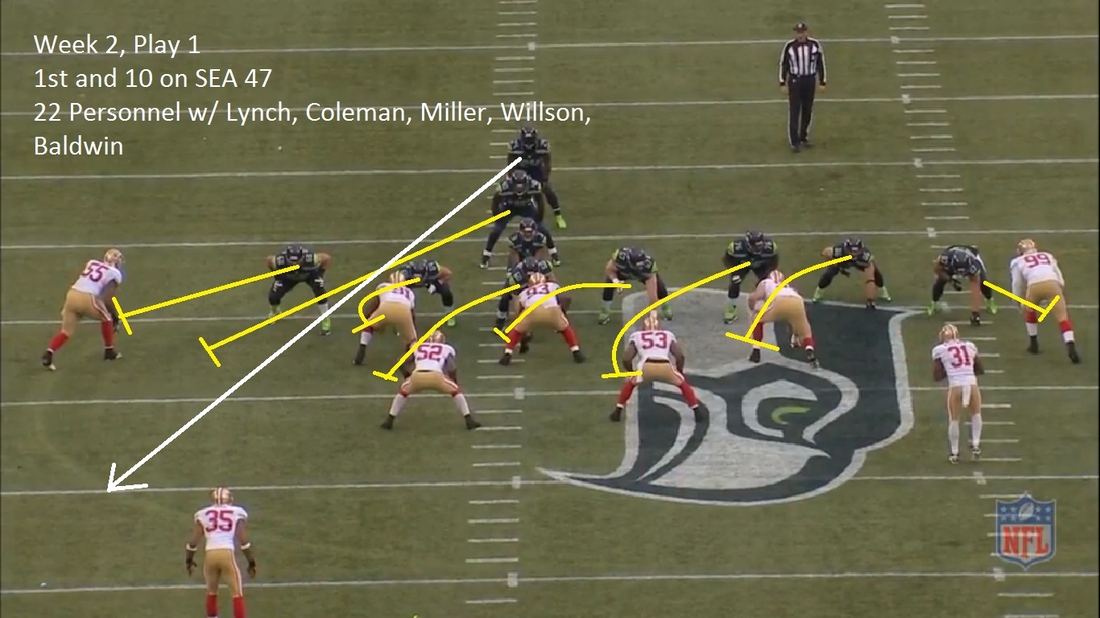 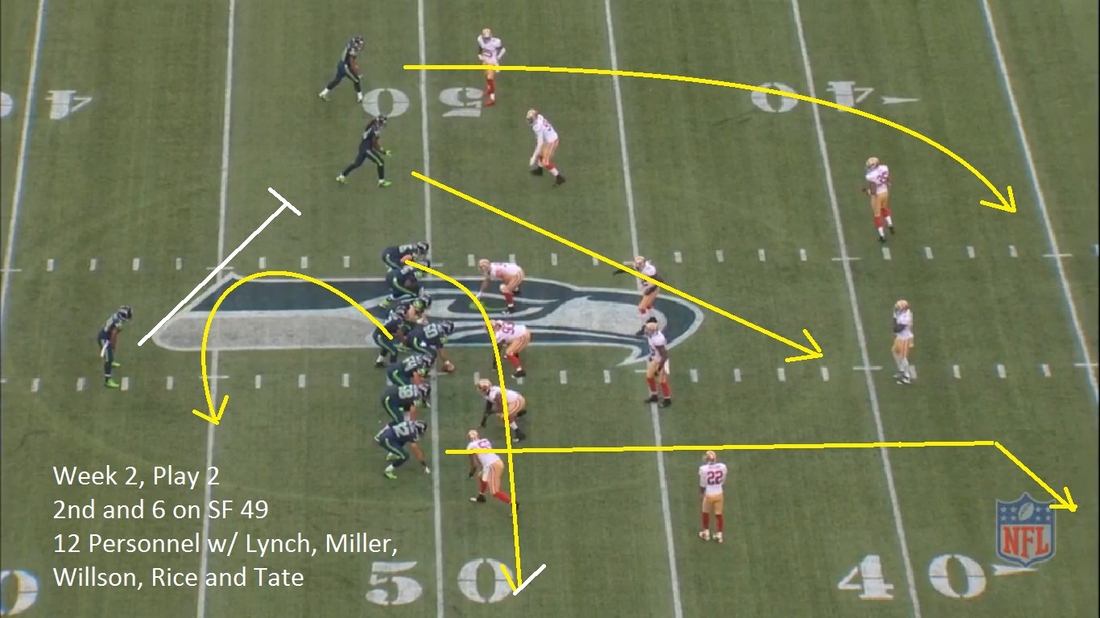 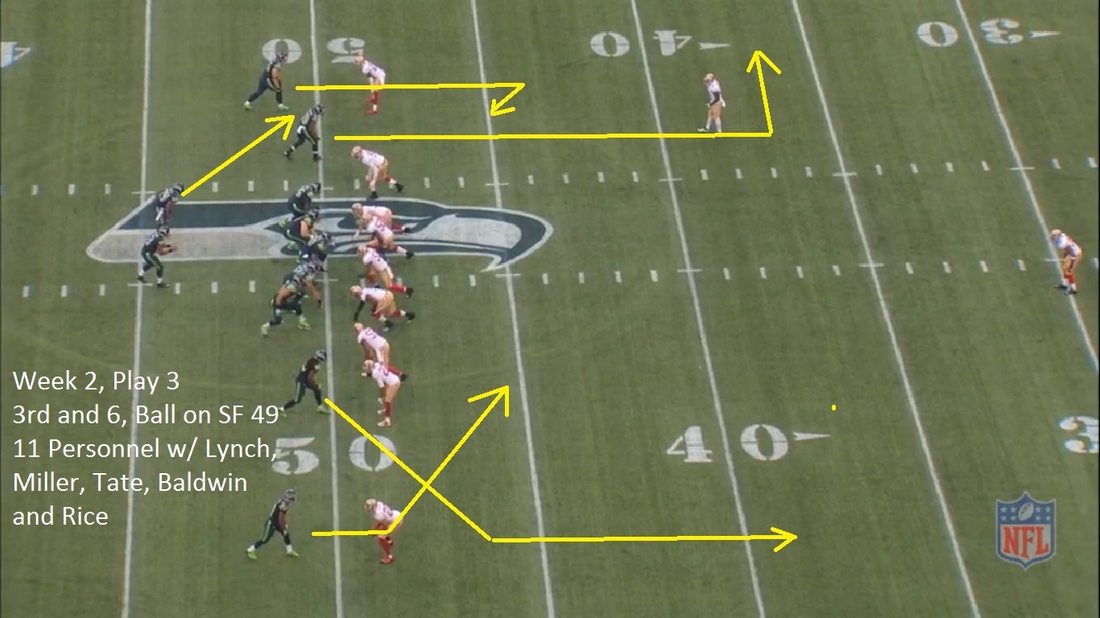 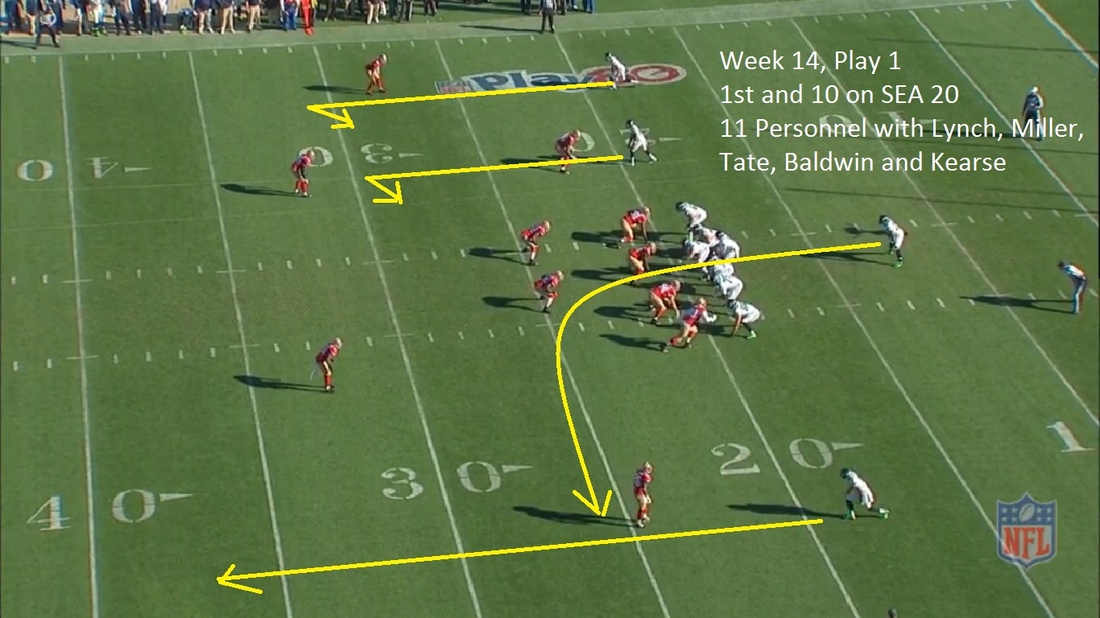 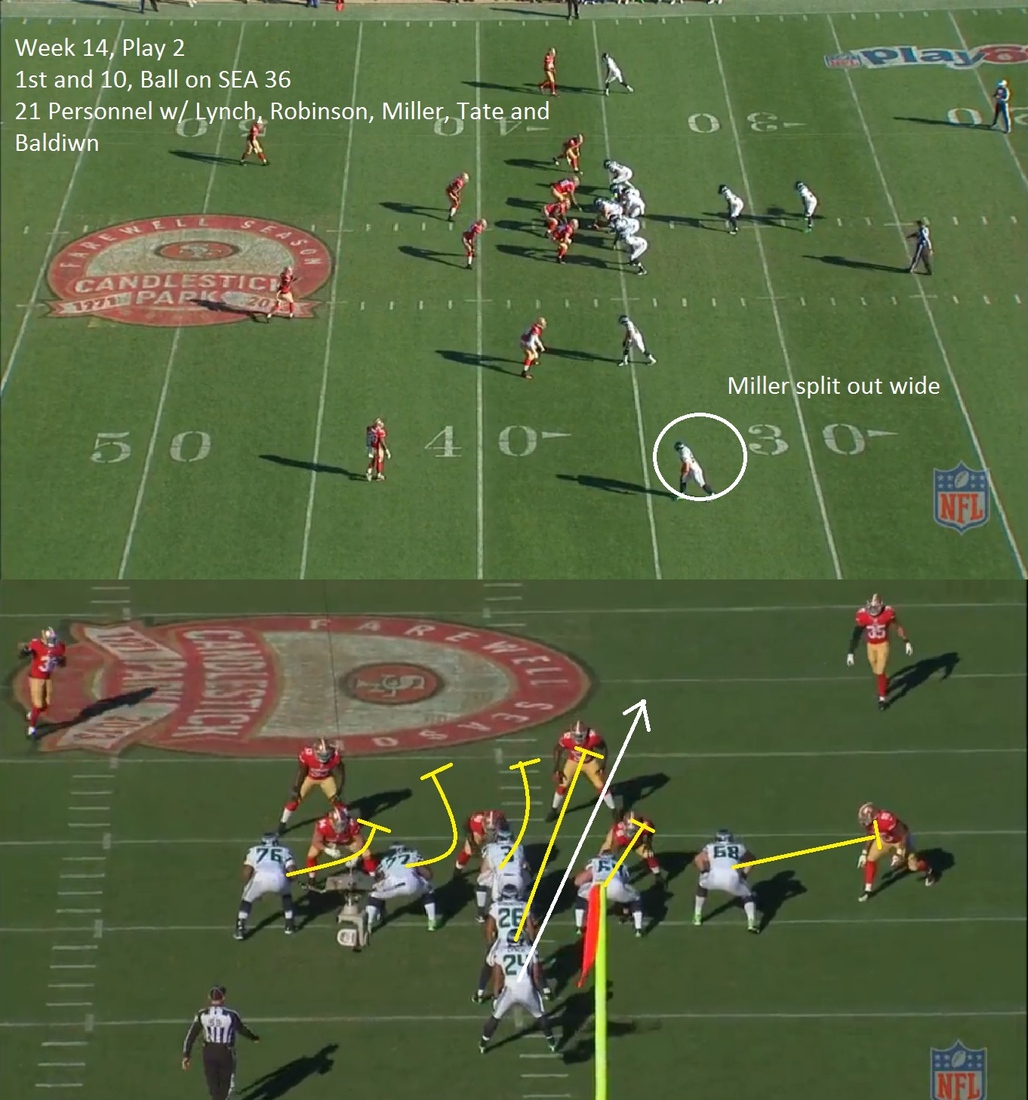 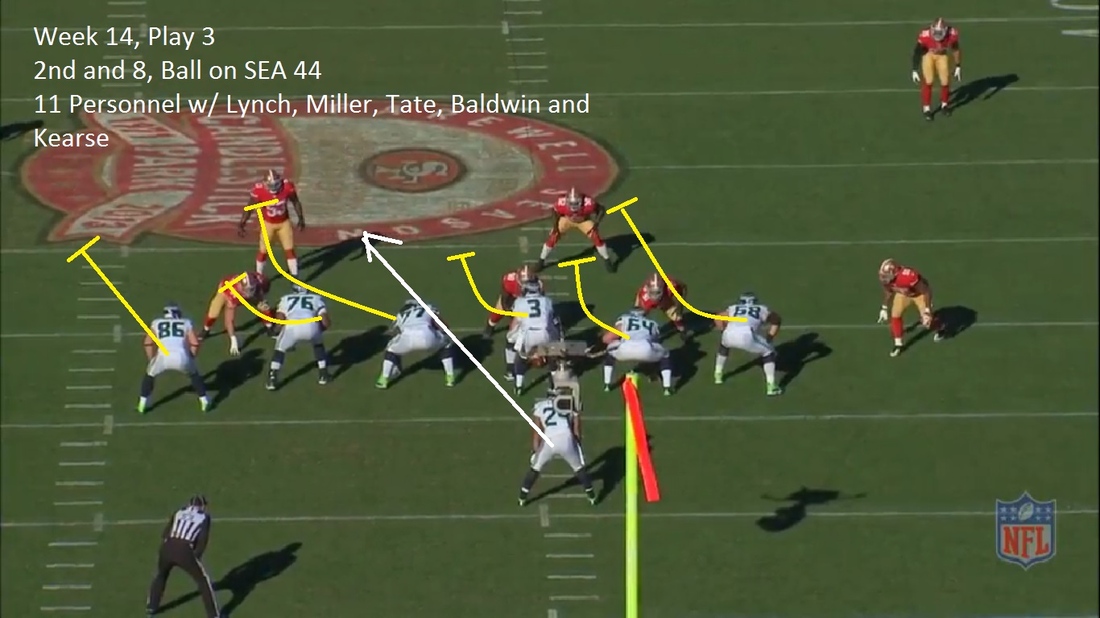 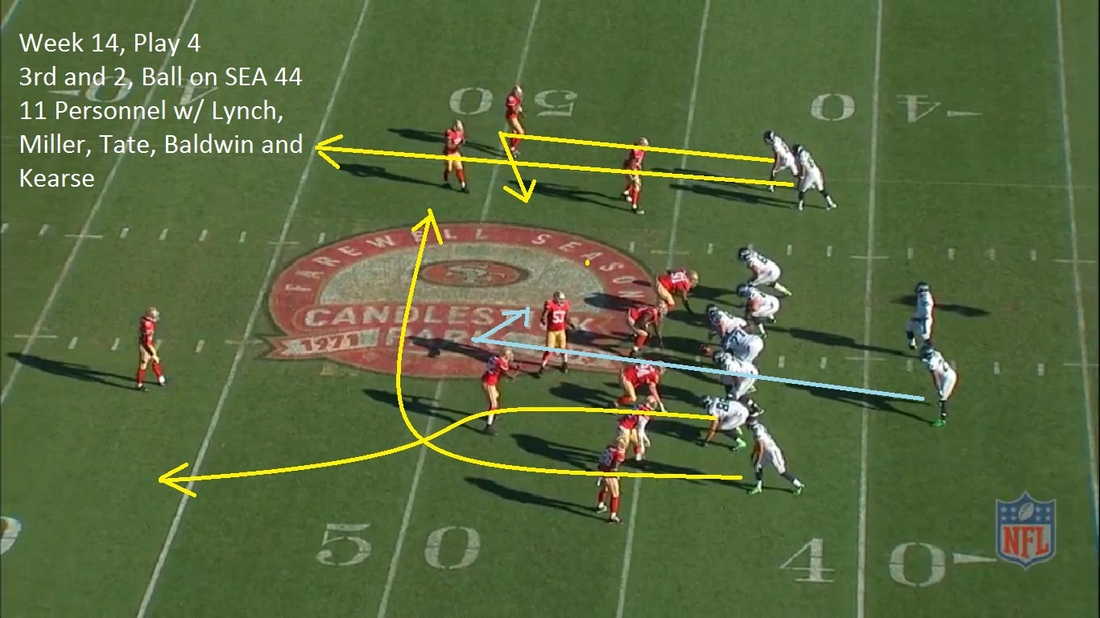 *I included the second drive for this game because the first play resulted in a turnover. 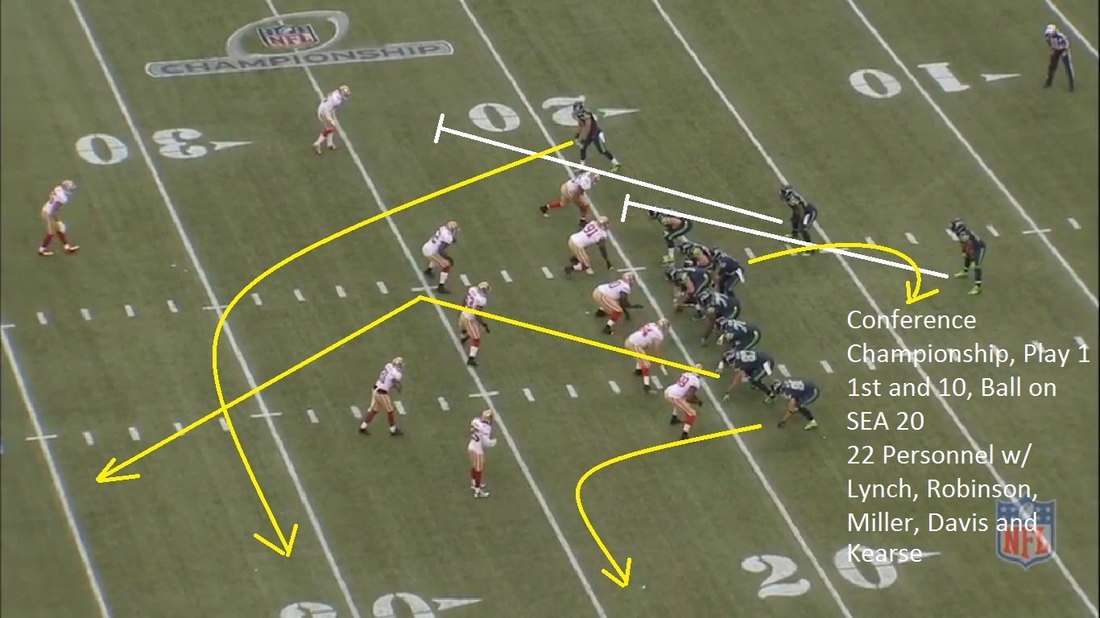 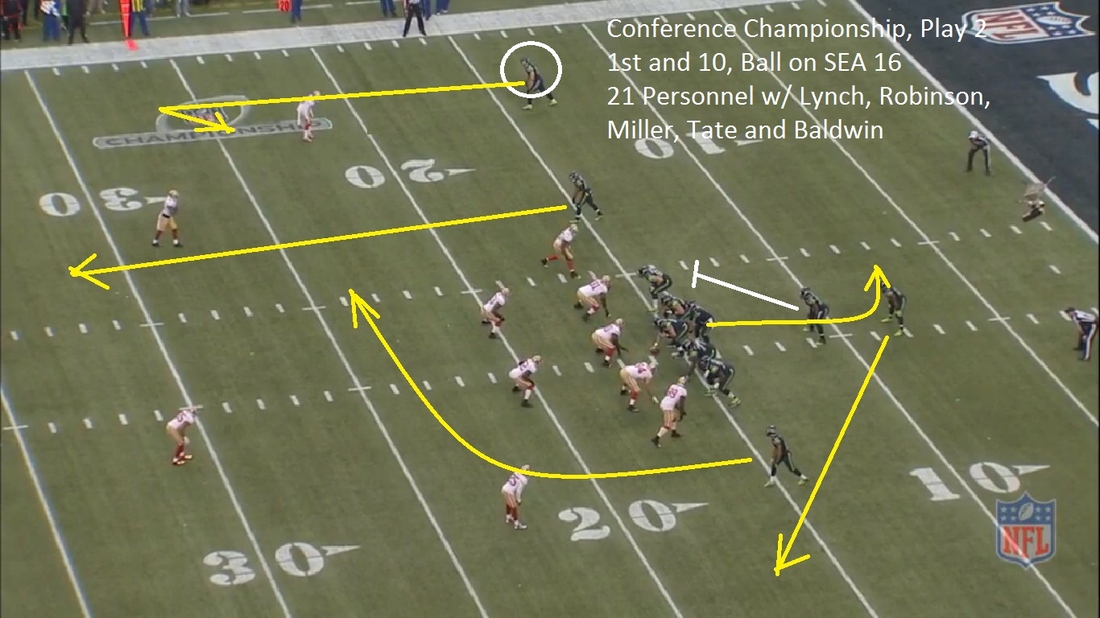 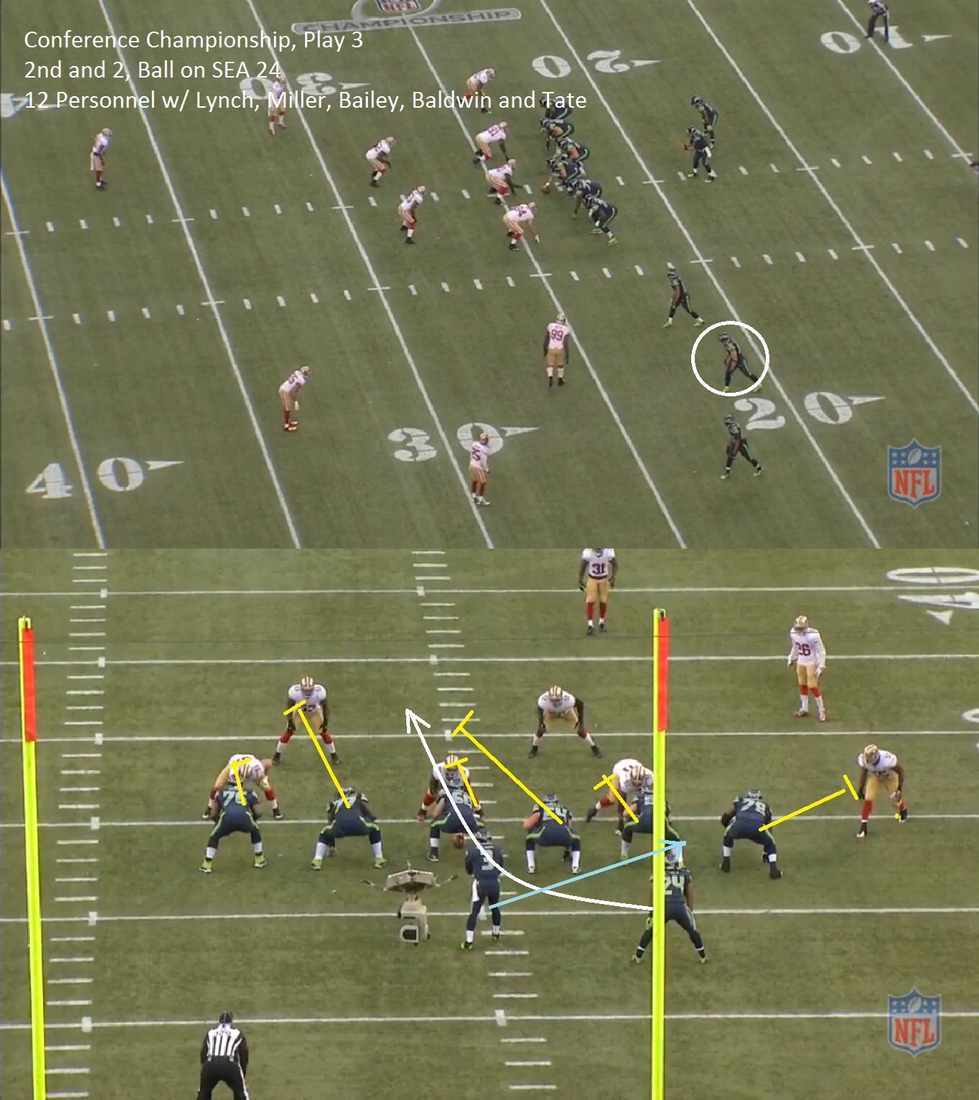 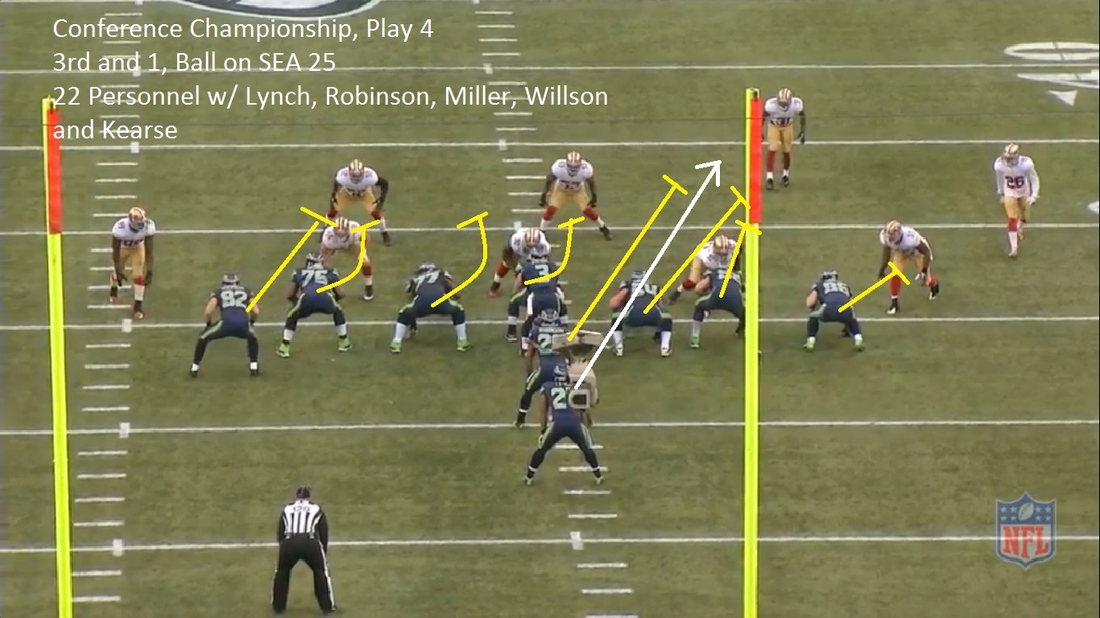 The final tally results in six run plays vs. seven passing plays (four from play action), again emphasizing Bevell's penchant for a balanced offense. Likewise, while the Seahawks have not always had successful first drives (which limits the amount of evidence we have on Bevell's script), the little tidbits of his offensive philosophy are clearly evident.

We see a lot of crossing routes and curls, pieces of the West Coast Offense that Bill Walsh made his own and plenty of zone blocking runs that Cable no doubt had brought over with his hire. Obviously, we have to take into account all the other factors that have affected the Seahawks in the past few weeks. Nevertheless, I think this paints the picture as to what Bevell wants to do. Whether or not it has been effective though, is another story for another day.