Everything You Need to Know About Passing, pt 1: The Route Tree

You plant a foot in the ground. Then somebody circles the foot, because that's what media people do. (Nobody knows why). Before long, that foot you planted grows into a tree. A route tree. Or something like that.

Share All sharing options for: Everything You Need to Know About Passing, pt 1: The Route Tree

Everything You Need to Know about Passing I. The Route Tree (part 1)
I have a series of articles planned that will cover everything you could possibly want to know about passing the football.  Given that I just had to break my first article into 3 pieces, this could be a VERY long series (provided of course I don't pull a Joss Whedon and get prematurely cancelled.)

I'm starting at a very basic level, and gradually working my way towards more complex subjects.  So bear with me (or don't) if these first few articles seem a touch remedial.  But I cannot (for example) write a decent article on how to beat cover 2 with a levels concept if I have to spend half the article defining the levels concept and the cover 2 defense!  (Well I could, but it would be a terrible article.)

To give you an idea of where we're headed, I'm hoping to eventually build up to subjects such as how a QB can recognize coverages based on pre-snap keys, how defenders recognize route-combinations in zone (and how to exploit this on offense), as well as the correct technique for picking up a blitzing LB, and which guy the back ought to get if more than one looks like they're about to come free.

When I asked the almighty Google Bing to tell me the origins of a football route tree, it was stumped. (See what I did there?  Stumped!) But I did discover that Don Coryell is the man credited with first bringing route trees to the attention of the public.  If you've never heard of Don Coryell, he coached the San Diego Chargers long before I was born.

Coryell's offense was about three decades ahead of it's time. He put Kellen Winslow Sr. (TE) and Charlie Joiner (WR) into the NFL Hall of Fame, the latter setting then-NFL records along the way for career receptions and receiving yards; none of which stood long before being reset by Steve Largent.

I apologize in advance for this, but you almost certainly know Coryell's quarterback Dan Fouts. He's currently ruining football games on CBS by talking. You can hear him on any TV where the mute button doesn't work.

The '70s may have been 40 years ago, but you can still see the "Air Coryell" offense in the NFL. Off the top of my head, both Atlanta and New Orleans have used it recently with great success. (The Falcons 2012 season notwithstanding obviously.)

Coryell's scheme was based almost exclusively out of 21 personnel (2 RBs, 1 TE, 2 WR). To call a play, Don needed a way to efficiently communicate each route, while keeping the system flexible enough to make adjustments based on how the defense was playing. The system also had to be simple enough that Dan Fouts could understand it.

The solution: Draw up the 10 most common routes for each position and give them a number.

Here's a picture for the visual learners: 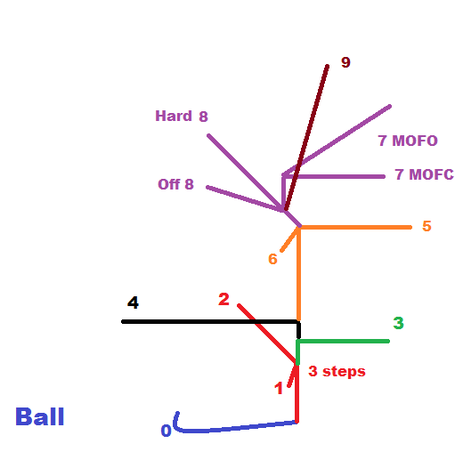 This was the route tree I used in high school. While there's plenty of variation, some stuff is the same no matter what. Inward breaking routes are almost always given even numbers, while routes that break towards the sideline are given odd numbers. The deeper the route, the higher the number. Most teams judge route-depth based on the spot where they want the WR to make his cut, although some of them judge by where the QB should throw the ball.

A 9 is virtually always a "go" route straight down the field.

In this system, passing plays are called according to a formula. First the formation is called, then three numbers corresponding to the X, Y, and Z routes, followed by additional verbiage if there happens to be a line-call or the backs need any additional information. 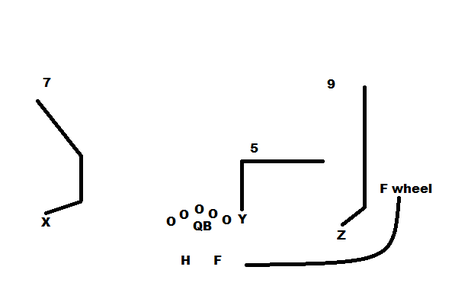 "Pro strong" tells the offense how to line up. The "759" and "F wheel" routes are marked. The tailback has no instructions and thus does his default job.  Most likely he's either pass protecting on the backside or chip-releasing into the flat.

That's all for today.  I hope you liked it, and I hope you learned something!   In the next installment, we'll delve into the route tree further.  I'll break down all 10 routes individually, and talk about depth, break, and stems.  We'll also look at how a WRs split impacts his tree, and the major coaching points for each route.