Reloaded: An illustrated guide to playing cornerback with Richard Sherman

Share All sharing options for: Reloaded: An illustrated guide to playing cornerback with Richard Sherman

DK Note: I wrote this article about playing the cornerback position back on September 20th in part due to the brouhaha around the Richard Sherman vs. Darrelle Revis twitter feud. With all the hullabaloo this past week between Patrick Peterson and Richard Sherman on twitter, I thought it might be a good time to break it out again.

Instead of debating who's the best, I had just wanted to down a few of the skills necessary to excel at the position -- one of the most difficult positions to play in pro sports. I used Sherman's game -- his skills and techniques -- to illustrate. It's a little outdated at this point, obviously, but the core concepts still hold true.

This is what Sherman told John Clayton last summer, shortly before his eight-interception 2012 season began.

"If you don't have the mental aspect of the game down, that's one advantage (opponents) have on you. Because you know, everybody has the physical attributes at this level - everybody can run fast, jump high, do everything you need to do to be successful, but studying film for hours, and hours, and watching receivers, and watching splits, and watching second down, third down, first down, red zone, everything, that gives you a different kind of advantage.

"It kind of gives you a strategic advantage, because, when it's third and five, and you've watched every third and five they've had for the last four or five games, you know which route combinations they like out of which formations, and when they show you the formations you want to see, it makes it very easy to stop them.

"I've been watching film on ...pretty much all the receivers we're going to be going against [this year]. That's the only way you can prepare. If you go into the game blind, and you don't know their tendencies, their offensive tendencies, -- there are offensive tendencies - the plays they run, the plays they love, their bread and butter, then you have receivers -- the routes they love, the routes they're going to get open on. If it's fourth and five and they're going for it, you want to know which routes they have in their bag."

One of the reasons playing corner is so difficult is that the opposing receiver has the advantage of knowing where he's going to be running. With enough study of an opponent's tendencies, common route combinations, preferences, personnel groupings, down and distance, etc., a corner can mitigate this disadvantage. Sherman has shown this ability over and over in his short career.

You can see this in action in the example below, from Seattle's Week 14 win over Arizona in 2012. The Cardinals are backed up in their own end zone. Larry Fitzgerald splits out to the right in a one-on-one situation. With John Skelton at quarterback, the Cardinals are likely just trying to go for the first down marker, rather than trying to heave it downfield. Sherman knows this.

It is akin to a batter guessing on a pitch based on the count and the pitcher's tendencies. In the GIF below, Sherman is in press coverage. He offers a quick stiff-arm to disrupt the timing, then turns his head immediately to look for the football. He "feels" Fitz on his hip, but is looking back in toward Skelton, allowing him to see the ball leave the quarterback's hands and get a read on the ball.

Smith aligns just outside the numbers on the tight side of the field in one-on-one. Sherman administers a jam at the line, gets his head turned around in toward Newton and sees the pass leave the quarterback's hand before the receiver even knows it's on its way. Smith pushes off when Sherman breaks on the pass, trying to get his desired spot.

The art of the jam

Staying with the same example, Smith is responsible for running 10 yards deep to a particular spot on the field and getting his head turned around for the pass from Newton. If Smith's route is timed perfectly with Newton's drop back, he should have the ball in his hands right as he turns.

Sherman's stiff-arm jam slows Smith up out of his release by half a second. It's enough to disrupt the timing and location of Smith's route. The ball hits Smith in the thigh almost as he's turning his head to find the ball.

You can tell by simply watching Sherman's eyes that he read this route all the way and used his jam to better position himself. Sherman's gaze is only on Smith for a split second after making his turn. Sherman breaks on the ball when he sees Newton release his pass. You can see his arms come up as he tracks the football. He was prepared to make the interception, but Smith's shove prevents it.

That brings me to an important attribute for high-level cornerbacking.

Many cornerbacks struggle with this concept. It's what separates the good from the bad and the good from the great. You can be shifty as hell, have great footwork, long arms, be physical at the line, but if you can't look back and locate the football when you need to, you'll get burned.

This means, if a corner is trailing in coverage, he must keep his eye on the receiver's eyes and his arms/hands. If the receiver looks back or up for the football, that's usually a good indication he's tracking it in the air. The instant he raises his hands to make a catch, a corner disrupts the trajectory of the ball by swiping or clubbing.

This is Sherman's specialty. Using excellent balance, precise footwork and measured steps, Sherman flips his hips to run with Wes Welker on the outside during Seattle's Week 6 matchup with the Patriots last season. Here, Sherman trails Welker nicely after getting his head around to locate the football. Once the ball is close, Sherman uses his length to get into the passing lane.

This play reminds me of a quasi-famous photo of Sherman that made the rounds in the Seahawks' blogosphere during the summer. That photo was accompanied by the rumor that Sherman hadn't allowed a reception to anyone during OTAs, minicamp and training camp. (Photo HERE.) Good luck trying to drop a pass into a bucket down the sideline over a 6'3 corner with excellent timing and a 37" vertical.

Sherman has become nearly impossible to throw on when he's in man coverage on the outside. Teams scheme for that by moving receivers inside to the slot or bunching up several receivers on the same side. However, Sherman has shown an ability to defend from most spots, and an elite cornerback can function inside or out.

Versatility, inside and outside

The same principles apply to playing on the outside. In the GIF below, Tom Brady tries to float a pass over Sherman. It didn't work. This was that famous "U Mad Bro?" game, in case anyone has forgotten. Sherman seems offended when quarterbacks try to throw the ball past him in press coverage.

Seattle's coaches prefer to keep Sherman on one side and Brandon Browner on the other, but they've shown lately that they're willing to move the All-Pro corner around to shadow some of the league's better receivers. Sherman marked Carolina's Steve Smith in Week 1. He followed Anquan Boldin inside and out against San Francisco in Week 2.

Below, the Panthers run a bunch formation which forces Sherman into an unorthodox alignment. He flashes his recovery speed to break up the pass, after it looks like he's been beaten.

Recovery speed and baiting the quarterback

Sherman is one of the better corners in the league at making up ground once it looks like he's been beaten. Sometimes he even baits quarterbacks into throwing passes to receivers they think are open. Sherman led the league with 24 passes defended in 2012. His eight interceptions were tied for second-most in the league.

From Seattle's Week 16 matchup last year against the Niners:

From the Seahawks' playoff loss last season to Atlanta:

"He had him beat, but he recovered and knocked the ball away ... "

"Welp, I guess that's why he plays defense." It's a tired cliche among television analysts when a defensive back can't hang on to what might have been an interception. It's hard to say that about Sherman.

His ability to high-point a pass or keep his feet inbounds is a reminder about Sherman's past as a receiver in his first couple seasons at Stanford, where he earned Pac-10 All-Freshman honors.

Sherman's specialty is press coverage, but he's improved in his off coverage over the past couple seasons. The most important tenets of off coverage are play recognition, anticipation, body control, ability to backpedal smoothly and transition to moving forward while making a break on the ball. "Click and close" is the scouting lingo.

That pick against the Rams sealed the game as St. Louis drove into Seattle territory with under a minute remaining and trailing by a touchdown.

Another underrated aspect of the cornerback position is the physicality and technical proficiency required for blitzing and tackling. In a Week 10 win over the Jets, Sherman forced a Mark Sanchez fumble on a corner blitz. Here's how he described the play after the game:

"It wasn't a called blitz. It wasn't a called blitz or anything. It's a coverage we have [when facing that grouping of personnel]. I'm in locked coverage on whoever is on the backside, - you know, whichever tight end is on the back side, I'm locked up with. But if he motions -- there are two tight ends - it was a two tight-end set - but, in that particular instance, they brought an extra tackle instead."

"The tight end [to my side] motioned, but the tackle there, he's not going out for a route. You know, I haven't seen this look since camp. They showed it to me one time in camp, and you know, expect me to play it when I see it. So, I saw it."

Sherman reacted to what he saw without a shred of indecision.

"[Afterwords], coach was like, 'man, how did you remember that?' and I was like, 'well, you told me to play it like that!' There's a lot of things, a lot of adjustments that you see on the line. Movements, you have to know when they're in a straight I-back set, an I-near set, an I-far set, motion the Y-tight end over the line, everyone has to know it, so it's a lot more cerebral than people think."

This is the mental aspect of the game, the anticipation and recognition.

I'm not going to blow smoke up and say that Sherman is the most physically dominating tackler in the NFL, but he does a decent job of it. In Seattle's Week 2 game against the Niners, Sherman redeemed himself after getting run over by 270-pound tight end Vance McDonald. On a subsequent play he showed that he isn't afraid to hit, especially if it's a guy more his size.

Also, Sherman is apparently so skinny that those three lead-blocking linemen didn't see him, giving him a free path to hit Kyle Williams.

This gives you a better idea about what it takes just to get into the conversation about which corner is the NFL's best. Richard Sherman and his constant trash talk may still be an acquired taste for many, but he is objectively awesome at playing corner. Even Darrelle Revis (and Patrick Peterson) could/should acknowledge that. 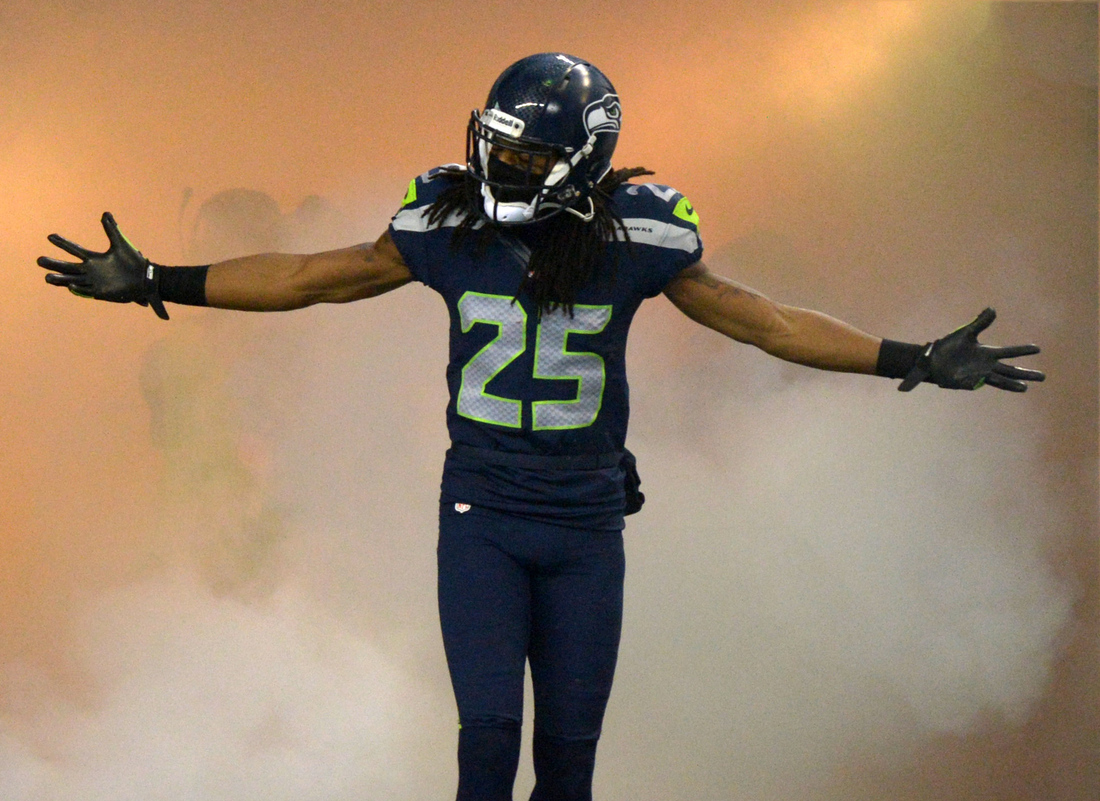