It's a death trap,
it's a suicide rap,
we gotta get out while we're young,
'cause baby we were born to run.

If you take the coaching staff at their word, the Seahawks will also lighten the load on Marshawn Lynch a bit. He's had over 300 carries each of the last two years, although I suspect they'd like to keep him in the 240-250 range this year if all goes according to plan.

This of course means more carries for the other running backs. One player who might stand to benefit is former 2013 second round pick Christine Michael. Last season, C Mike was inactive for 12 games, and compiled an end of season stat line of 79 yards on 18 carries. There were games where Marshawn had that by halftime!

Lets take a closer look at one of Michael's runs from the game last Thursday. It's 2nd and 5, and the Seahawks are threatening on a long drive after Denver's first TD. We have the ball on the 9 yard line, and the Broncos first string defense is on the field. Offensively, we've called an inside zone to the weakside. Defensively, Denver's in what appears to be a vanilla cover 2 Buzz, although I'm not entirely sure. 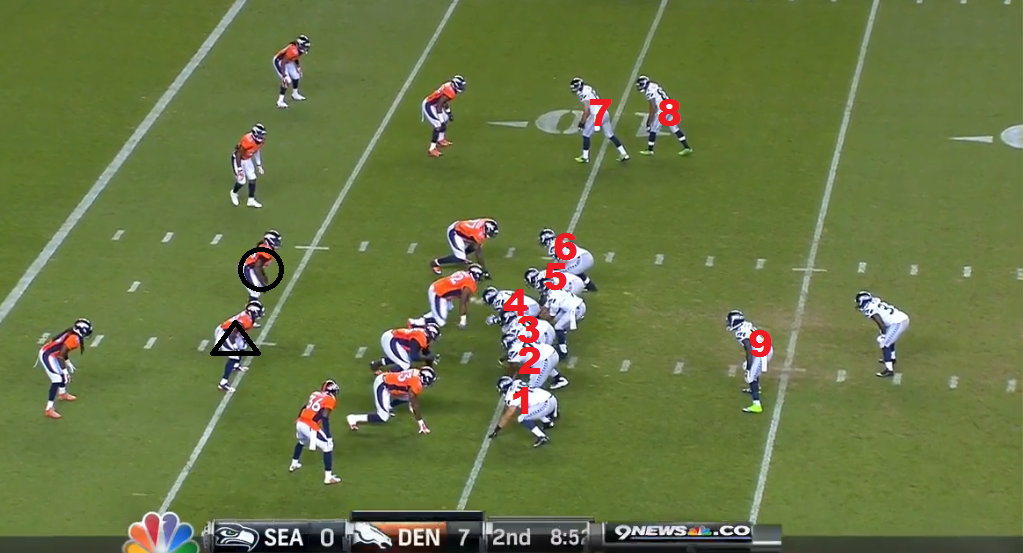 Cooper's job is to step inside of the DE and wall him off.

Alvin and Caylin are going to start the play by double teaming the DT, and blowing him off the line of scrimmage. Bailey will establish inside leverage, and Hauptmann is going to peel off the block in order to take the Denver LB I've marked with a triangle.

As with Bailey and Hauptmann, Jeanpierre and Schilling are going to double team the NT at the snap. If they can move him right, Steve will establish leverage while Lem peels off to take the circled LB. If they can't move him, Jeanpierre (who has leverage by virtue of his alignment) will take the NT while Schilling works upfield.

Britt has to take the DE right in front of his face, and not let him get inside.

Kearse's job is to get downfield and block the free safety. If the safety cheats too far inside (he's leaning that way right now) Kearse will settle for the CB. Lockette's job is to block the LB who's out wide, in the flat zone.

Normally it's a bad idea to ask a WR to block an LB 1 on 1, but the block doesn't have to hold for very long (if at all) since they're so far away from the play.

Coleman's job is to lead down the alley and pick up the first defender who gets into it. Ideally, that will be the strong safety. 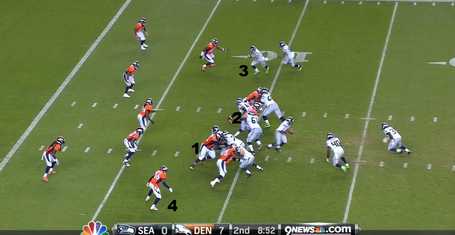 Four things to notice in this picture:

1: Bailey and Hauptmann absolutely nailing the double team at the point of attack. Notice how Hauptmann is keeping his right arm free so that he can quickly disengage and block the LB.

2: Schilling brain-farts and completely forgets his assignment. Jeanpierre has leverage towards the sideline, but he's powerless to stop the rush directly upfield.

3: Kearse and Lockette both have good angles on their guys. Kearse's block in particular is key, since the offense would much rather see the FS blocked and force the weakside CB to make a tackle.

4: Kayvon Webster (the strongside corner) is about to have a huge pile of bodies between him and the play. Webster is unblocked as well, but there's no way the defense can ask him to make a play here. Particularly since Webster must keep outside leverage in case Wilson keeps the ball himself.

The play's in serious jeopardy here. The NT at 1 is three yards into the backfield and has an unobstructed path to the RB, who doesn't even have the ball in his hands yet! Britt (on the right) has given up leverage already, but he's far enough away from the play for this to be a non issue.  However, the rest of the blocking is very good. Notice that Coleman (#40) is heading into a wide open alley. If he can wall of the SS and C-Mike can make the NT miss, the play should go for a TD even despite the error.

Christine makes the cut so smoothly that when watching at full speed, you barely even notice it. When combined with a questionably legal block from Lem, the marauding NT's out of the play.

At 1, we see Britt's guy about to disengage. If Mike was running at full speed, it would be too little too late. As is, the defender only manages weak contact which Michael easily runs through.

At 2, Schilling (again) managed to run right past the defender he was supposed to block without even touching him! Fortunately, Coleman's there to pick up the mess. Unfortunately, this means nobody is around to block the safety Coleman was gonna pick up.

And the entire play in slow-motion.  (My apologies to any mobile users)