*Author's note* I wrote almost this entire article prior to Cassius Marsh's injury in camp on Wednesday. It's now looking like Marsh's injury is just a slight knee sprain so hopefully that means he can return to action relatively quickly.

There are approximately four months between the Superbowl and the NFL draft. If you spend much time on Field Gulls during that ¼ of the year, you're likely to stumble across articles and comments that sound something that sounds like this: "Flashes strength and power on the edge. Uses his hands well to control and shed blockers." This is a quote from the NFL.com scouting report on Seahawks rookie Cassius Marsh.

It's also about as useful as telling us that Marsh uses his hands to eat a pizza. Of course he uses his hands to get off blockers. That's the job of a pass rushing defensive lineman! More interesting is HOW does he do it, and is it a skill that will translate to the NFL?

I haven't been able to make it to training camp this year, but both the general media as well as the Field Gulls excellent user scouting service have noted repeatedly that Marsh has been quietly productive. He's one of the guys I was really excited for during last Thursday's game. I wanted to see first hand if he lived up to the hype.

He does. Prior to the injury, I was very high on his chances of not just making the roster, but being an impact player for us.  Quality interior pass-rushers are extremely difficult to find, but it looks like Pete and John managed to scoop one in the 4th round. Kid's *really* good.

He has a club that's strong enough to stand on it's own, although he often uses it to set up a club-swing double move, in either direction. In addition he's got a 1-handed bull-rush (he uses the other hand to swat the guard's arms off his body) and does a very good job of using his own hands/arms to attack the hands and arms of the person attempting to block him.

The following is an example of his club-spin. It's his Let's see all of this in action. Here's his best play from last Thursday. It's 3rd and 10 late in the 3rd quarter. Osweiler's in at QB (you know, the guy Denver drafted instead of Russell Wilson), and the defense is gunning for a drive-killing sack. 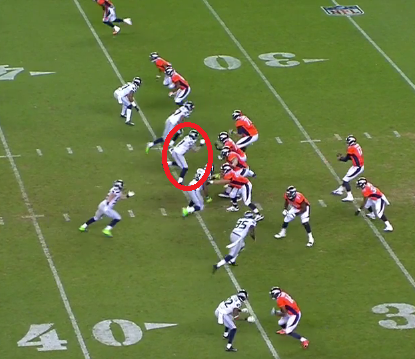 As you can see, Marsh doesn't get off the line with elite quickness. [See below for a picture of what elite quickness off the line DOES look like]. Anticipation and the ability to time the snap are teachable skills, so perhaps he can develop in this area. But he's not there yet. 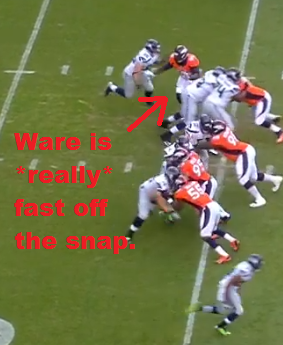 With his initial movement, Marsh swings his arm towards the guard's chest plate. The guard had seen this move before, as it's how Marsh begins his 1-handed Bull rush. 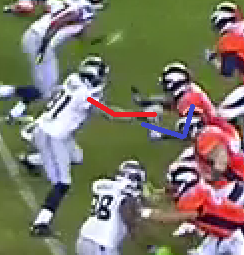 Perhaps anticipating the move, the guard forcibly swats that arm away from his chest. With few exceptions, the best way to kill a bull rush is to not allow the defender to get his hands onto your chestplate, inside and below your own arms.

The guard then attempts to control Cassius' body by planting his free arm on Marsh's chest. 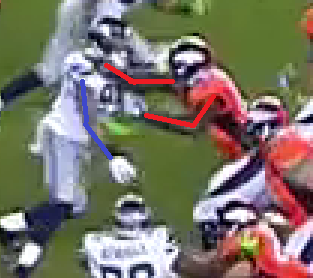 This was a mistake by the guard. Marsh uses his left hand to swat at the guard's elbow, pushing it across the body. Combined with a shoulder turn, you can see the guard's right hand is on almost the same axis as his left shoulder.

It doesn't look like it to a casual observer, but the blocker is in very serious trouble right now. He has zero control to his right. If Marsh can get his arm across the guard's body, the blocker will be able to do nothing but watch as Cassius runs past him.

If only there was a move they teach kids in pop warner that does exactly this... 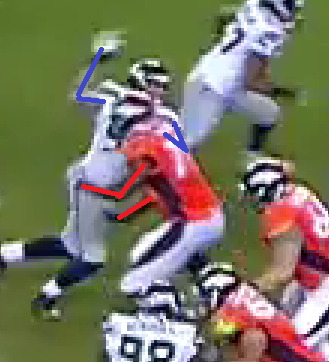 Why hello there swim move!

And just like that, Marsh is past the guard with a free path to the QB. In real time, the entire move sequence took just over half a second.

For the more advanced reader, notice how as soon as he commits to the swim move, Marsh transfers his weight off the right foot in order to make the cross-body step and get his hips into position. Coordinating hand-fighting technique and footwork is something that many players spend years learning how to do, whereas Marsh appears to do it instinctively.

On a personal (non-football related) note, I'd like to publicly thank the folks out fighting the Snag Canyon wildfire in central Washington. I happen to live there, and were it not for your efforts my home certainly would have gone up in flames by now. Many thanks, and stay safe guys!