Something else to add to the playbook? Let's see how Russell Wilson and co. continue to find different ways to expand the offense.

Share All sharing options for: Seahawks Replay Booth: The No-Huddle?!

This was supposed to be business as usual.

It's midway into the second quarter, and the Seattle Seahawks' offense is about to come out for their drive. Zach Miller and Jermaine Kearse are off to Russell Wilson's right, Percy Harvin and Doug Baldwin to his left. Wilson takes the snap, goes off to his three-step drop, looks left and finds Harvin on the quick out for seven yards. If you have been analyzing the Seahawks for the past three years you'd recognize that this play is a page out of the Darrell Bevell/Pete Carroll short-game design. Simple passes. Quick routes. 11 personnel in spread formation has become more and more prevalent. In other words, just business as usual for the Seahawks offense.

And, then things get weird. Things don't stop.

Wilson doesn't huddle, instead ushering his teammates on to the line of scrimmage from the same formation. Before the TV can cut to the wide view on the field, the ball is already snapped and handed off to Christine Michael , who rumbles down the middle for the first down. Immediately he gets up and strolls over to Wilson, who is barking instructions at his offensive line.

Another play is about to start. It's the same players but this time it is empty shotgun, and Michael's out wide on the left. Snap. Harvin and Baldwin blaze into their go routes while the rest run curls, but the pressure gets to Wilson and he scrambles down the middle for a hefty gain.

Now he's up, gesturing signals and lining himself back up behind center. Baldwin has switched spots with Michael on the line and picks up the hitch Wilson throws to him that is effectively stopped. He's slams the ball down on the turf, but there's no time to be frustrated - it's time to move again. 2nd and 8, Wilson throws and it's over the hands of Harvin, incomplete.

Time for a short break.

Paul Richardson, Bryan Walters, Phil Bates and Luke Willson subsequently rotate into the huddle. It's back to basics, move right for a short pass to the open tight end for a first down. Willson is pushed out of bounds by the Chargers defenders, stopping the clock. But the Seahawks offense is not stopping. Same personnel, same formation. Now they run the first play of the drive again: three step drop, quick slant to Bates. Pops up and keeps going. Only a false start by the line could stall the momentum, but by then it was already first and goal.

That, my friends, is what happened when the Seahawks decided to run the no-huddle last Friday against the Chargers - the same philosophy/scheme behind the passing attacks of New England and Denver. Now, this whole process might be very curious for a team that prides themselves on taking the full control of the clock and running . But as Joshua Kasparek pointed out - the no-huddle is not the hurry up offense, or the stuff you see at the two-minute warning. Notice how long it takes for Wilson to get in between every play: 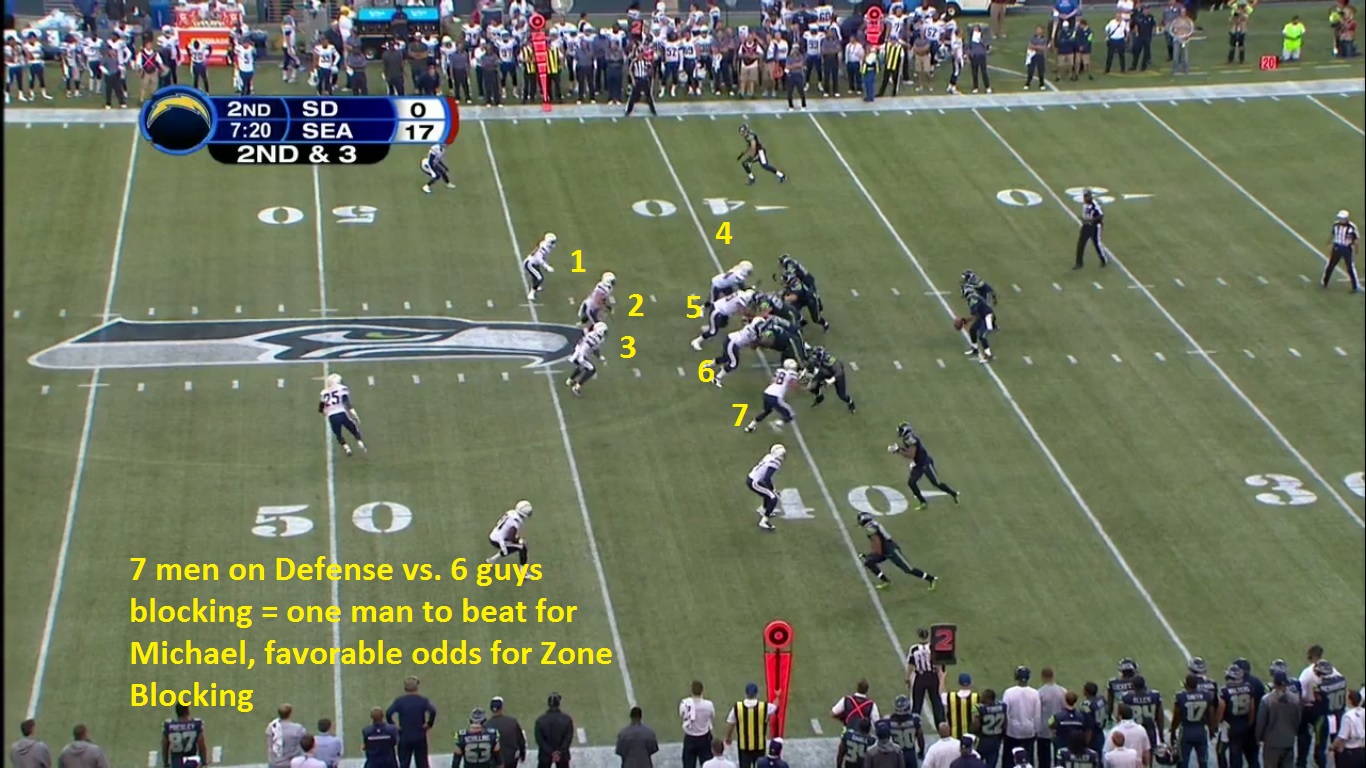 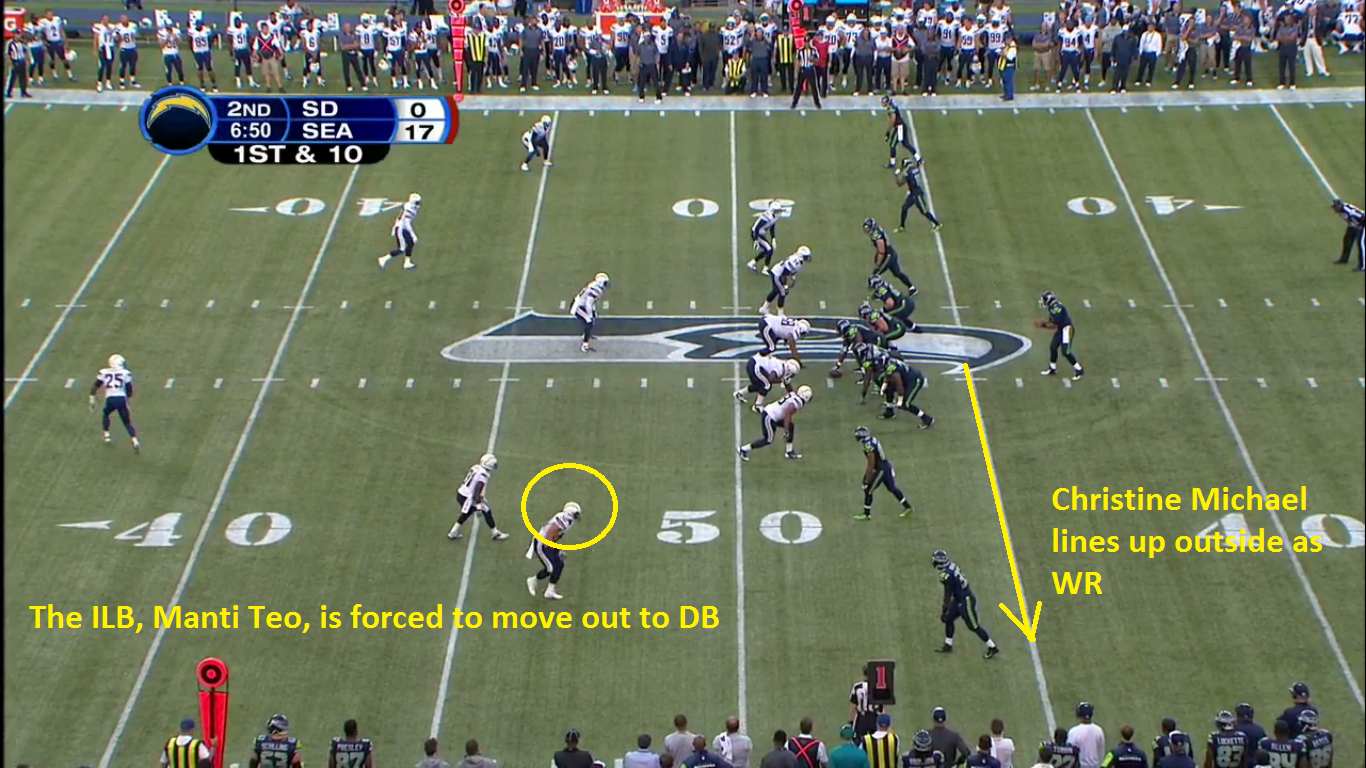 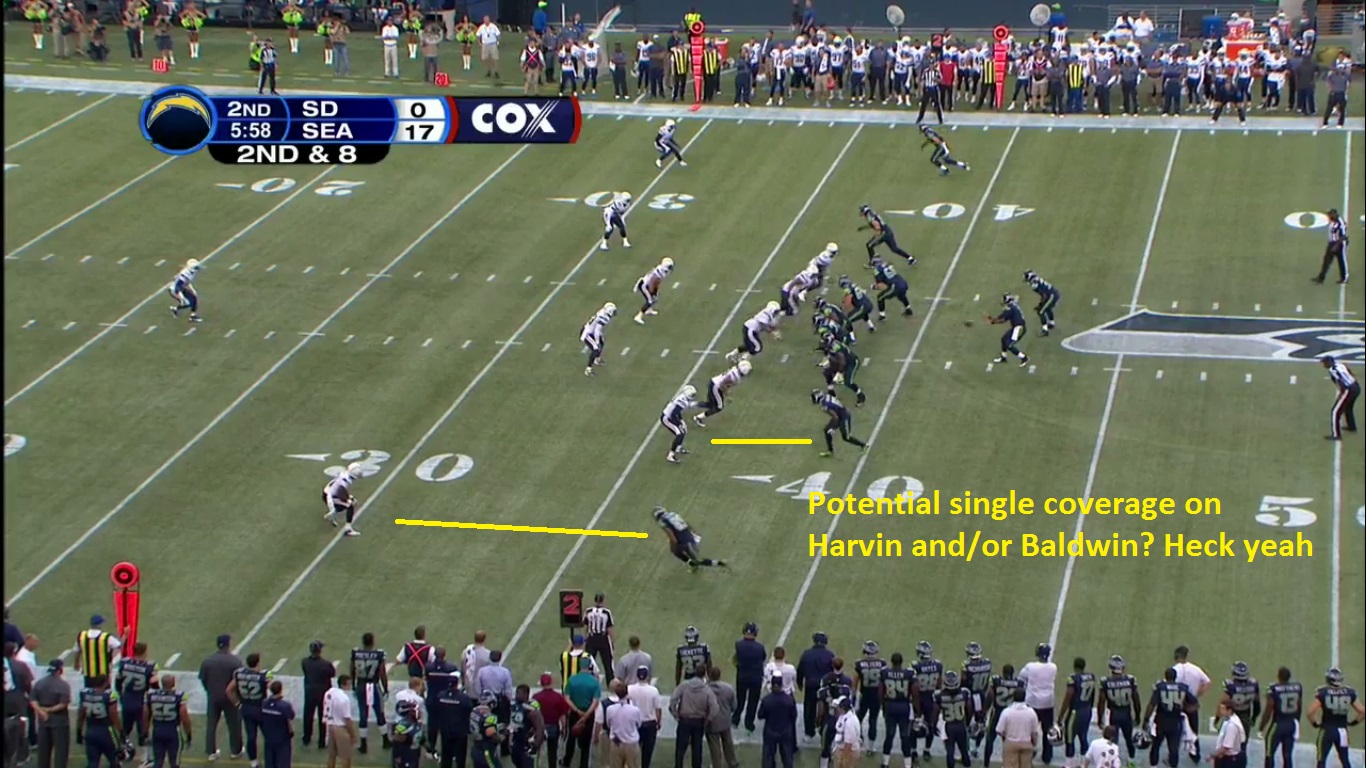 Even with the no-huddle, that's upwards of twenty to twenty-five seconds per play -- faster, but not terribly, than the time the Seahawks spend on average - which, per Davis Hsu's calculations, comes out to be about thirty-one seconds per play (slowest in the NFL, tied with San Francisco).

Of course, this wasn't the first time Carroll ran a version of the no-huddle. Take a look at one of the games from Bevell's first season in the Seahawks' offense, when T-Jax was under center. Not exactly break-neck speed:

And in a sense, these advantages of multiplicity and versatility are the things that Pete Carroll wants in his offense. It's not a departure from their base philosophy of controlling the clock, as we saw above. It simply does not allow defenses an opportunity to rotate in sub-packages and maximize the potential for mismatches. It makes the quarterback's job easier: simplifies play-calls, allows him to get set early and read the formation, works with the same players over and over again.

It's certainly an interesting aspect to keep an eye on as the first team keeps getting reps. Certainly on a offense as talented as this, a no-huddle could be effective, and another game-changer to add to Darrell Bevell's arsenal.