Scenes from the Victory: Christine Michael, Justin Britt and the search for cutback rushing

Share All sharing options for: Scenes from the Victory: Christine Michael, Justin Britt and the search for cutback rushing

This is Christine Michael. 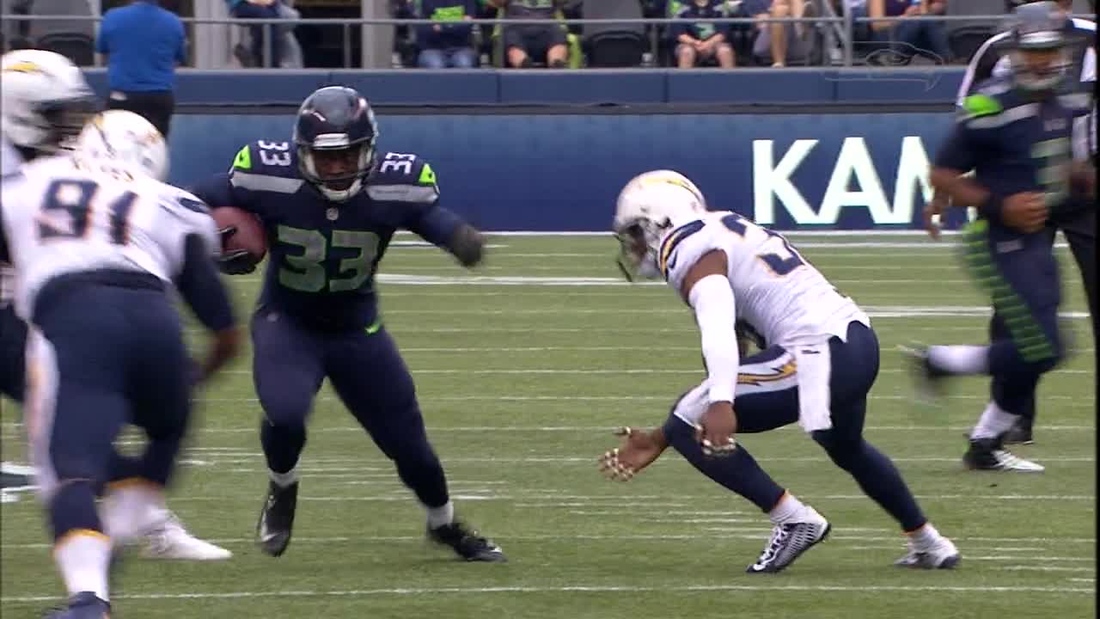 He is about to fumble. It's his first touch of the game, and what he must not do is fumble. But Kendall Reyes, unstuck from the forward arrow of time and aware that Justin Britt will be beating hell out of him for the rest of the game, is ready to dish out some preemptive retribution. He will square and put a helmet on the ball, and helmet to ball near assures a forced fumble.

No one doubts Michael's rushing ability. And maybe no one should doubt his ball security. He fumbled three times in 2011 and that grouping of fumbles when he was 20-21 has marked him as fumble prone. One could look at kenneling a fumbling rusher two ways (and probably more): that it's overly punitive and exhibits statistical illiteracy. Or that, from a teleological standpoint, fumbling and all other extreme misdeeds must be corrected severely to ensure a culture of discipline. Most coaches tend toward the latter, whatever the truth. And that tendency of coaches and how it biases the sample makes it near impossible to know if benching a fumbling rusher is overly punitive or necessary.

But back to the man named Christine.

Though Michael fumbled on his first touch, he was given another chance to prove he could contribute. If you watched, you saw this: 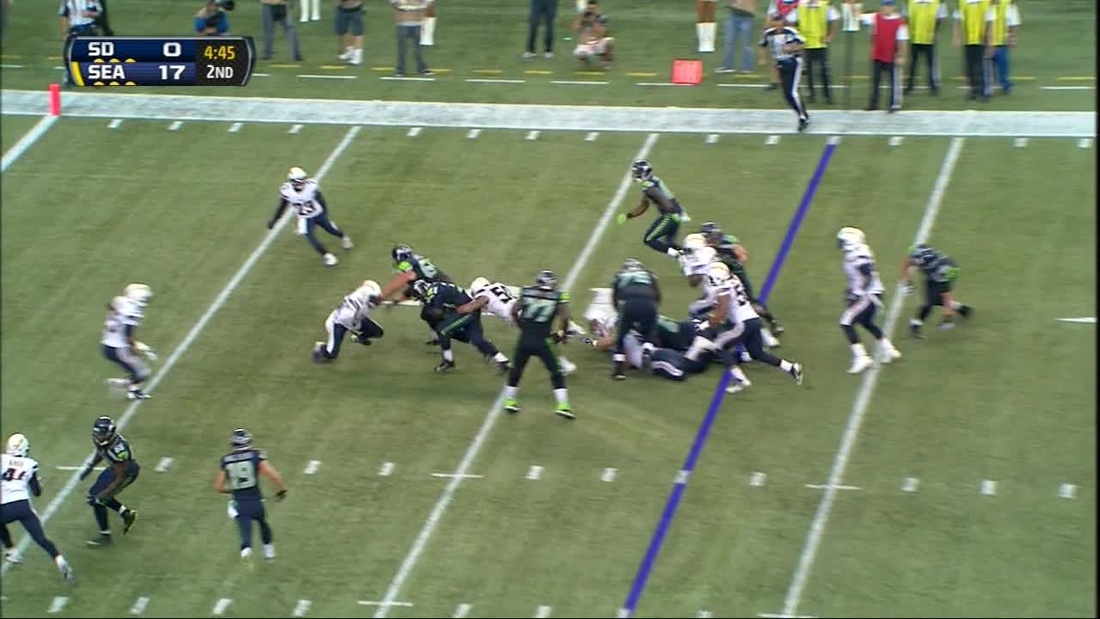 It would be facile to say "lesson learned--now about those Terrell Davis comparisons?" But turning points do happen, and young players of immense talent with damning but fixable weaknesses do fix those weaknesses, do fulfill that immense talent.

Why Michael matters so much can be explained a few ways. Beast Mode is something of a legendary warrior, but he is of a type, and offenses like Cable and Bevell's seek complementary types (e.g. Warrick Dunn and T.J. Duckett). Charting two games picked at random, Lynch went to the play side 81% percent of the time. That is what he's best at. Entering the fray and leaving felled men in his wake. But someone who can do this, that could be game breaking. 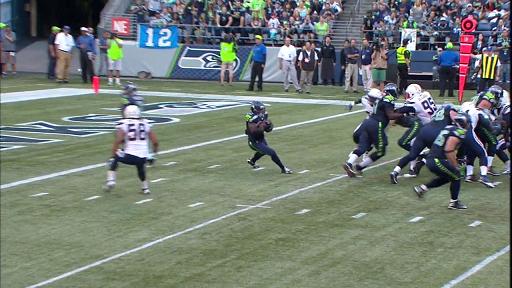 That's Robert Turbin and that's against the debilitated Chargers preseason defense. I do not want to say T-Wheezy can't do this in the regular season. I want to say he can! But if he can, he hasn't. And let me say before God and this ThinkPad, Michael could be no better.

But he should be.

Turbin v. Michael is something of a false dichotomy. The Seahawks would be better with both contributing maximally. Only fantasy football players much worry about individual totals. Team totals and much moreover team rates are what matter: yards per carry, basically, but more pointedly (& especially within a zone blocking scheme) success.

Worrying about how many touches are given to Turbin v. Michael is a bit like claiming Russell Wilson is not a franchise quarterback because he doesn't throw enough. Wilson, it would seem, throws enough 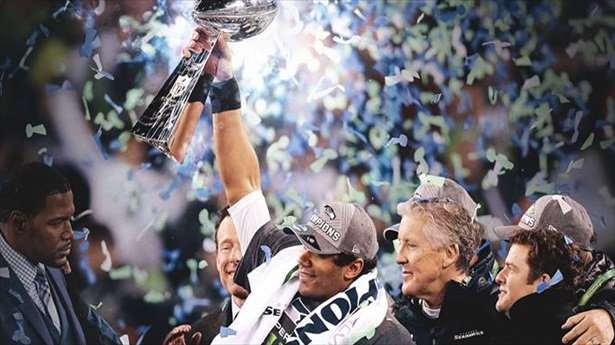 and the value of his those throws both individually and cumulatively rank him among the NFL's best. Likewise, Turbin v. Michael is largely something to talk about, something to give the preseason a thread of narrative, because the desultory nature of preseason play, with its substitutions and varied aims (v. low among them: winning), robs it of appreciable excitement for most. To like the preseason, you have to enjoy it on a snap-to-snap level, matchup to matchup level, and to do that, you must know who is fighting for playing time and against whom.

Michael saw very few snaps in 2013, and all in garbage time, whereas Turbin spelled Lynch and played in all 19 games. If Lynch were to receive equal priority in 2014 as he received in 2013, Michael would need to beat out Turbin for those touches. But Seattle wants a fresher Lynch saddled with fewer carries and a rising tide lifts all boats. There is opportunity for both rushers, especially if they can do what Lynch cannot.

But Turbin is fighting Turbin. His production plummeted after his rookie season, and however much you want to blame the line, he wasn't just bad, Turbin was bad relative to Lynch. That's a full fifth of a point per touch difference between Lynch and Turbin. Lynch's production is that much more sterling when you factor in strength of schedule, but no adjustment can help Turbin. Well, except ...

Let us return to that 47-yard cutback rush by T-Wheezy.

Cutback lanes rarely get more gaping, and so though Turbin showed vision and agility to get to it, this play was mostly a reflection of a bad defense little improved and in fact undermanned, and possibly much improved blocking by Seattle. The player circled is Justin Britt, and in this play he moves Kendall Reyes from just inside the right hashmark and standing to about a yard outside the left hashmark and face down. 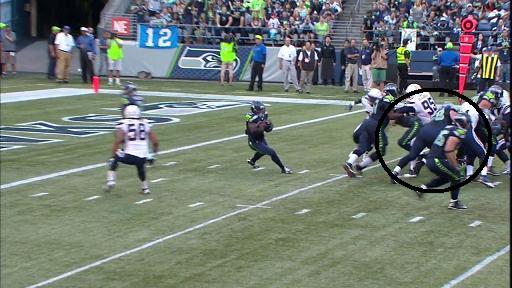 This play was built with the cutback in mind. Russell Wilson decoys by rolling right, and that draws Tourek Williams. Britt and J.R. Sweezy initially double Reyes, and making the left defensive end the so-called "point of attack" indicates that Seattle prioritized clearing out the backside. Seattle didn't do this very well last year. Sweezy struggled as a rookie and Breno Giacomini is now and forever Breno Giacomini. Out of deference to him starting for the Super Bowl winning Seahawks of 2013, I will say he did a damn good job of catching up and tackling forward a wrapped Marshawn Lynch.

Through two games of the preseason what Britt has excelled at is reach blocks, combo blocks and coordinating the release of that combo block--especially Sweezy releasing into a pull and Britt continuing to dominate one-on-one against a skating defender. In a gif, this:

And while Michael has been advertised as a burner, if Combine results are to be believed, he's no faster than Turbin. Extrapolating from their 20 to 40 yard times, which should represent each player's top speed, Turbin is actually a little faster.

But there is no comparison between the two's shiftiness and burst through the hole. Michael has it in spades; Turbin always seems an ankle tackle away from even a modest gain.

The Seahawks must approach this season with the unflinching goal of being better than last season. Seattle is not battling complacency as I've heard argued, but battling regression. It isn’t hard to understand why most teams fail to repeat without delving into the RealKultur of the team. Let us acknowledge, for instance, that Seattle almost lost the NFC Championship Game. From there we can note that Seattle led the NFL in turnover differential in 2013—a wildly variable stat. Most of its most important players were healthy throughout the season. And so forth.

To even be as good as last season, Seattle must attempt to be much better. Last season it declined from the best rushing offense in football to just seventh. Lynch cannot be made younger. Wilson should not risk injury anymore than absolutely necessary. And so it's up to the Seahawks run blocking, especially on the backside, and it's up to Turbin and especially Christine Michael to exploit that improved run blocking, and add a breakaway element to Seattle's rushing attack.