Introducing "Field Glasses," a new weekly feature here on Field Gulls that breaks down Xs and Os. If you have anything you've been wondering about the team, please feel free to ask it in the comments section and give me an easy article for next week! Otherwise, random GIFs and insulting remarks are always welcome.

For the debut article, you are being put to the test. Presumably, a few of you have played Madden before. Even if you haven't, perhaps you've spent some time armchair quarterbacking. Today, you get to put your pretend football skillz to the test. Tell me what you can make out of the image below.

Admittedly, "What can you make of it" was an open ended question. Allow me to be more precise: Pretend you're Russell Wilson and you're trying to make a pre-snap read. What do you plan on doing with this play once the ball gets in your hand? Are you targeting Percy Harvin all the way? Doug Baldwin deep for six? Is there a specific defender you plan to key off of? Roughly, what sort of coverage do you expect to see, and if the Bears blitz, where's it going to come from?

QB's go through a similar process to this (albeit with far more structure than I've presented here) on every single play.   Even the runs.

Have your answers in mind?   Ok.   Keep reading.

The first thing to look at is the route combination. On the left, I *believe* Jermaine Kearse has an option route based around the curl-flat concept. He definitely has the skinny post, because that's what he ran this play. However I've also drawn a curl. If the corner came down onto Zach Miller's route (like he would in a vanilla Cover-2, for example), it's on Kearse to cut his route short at the soft spot in the zone instead of run directly into the area covered by the safety above him. Without a copy of the 'hawks playbook, I obviously cannot confirm this, but it's a very common conversion when using this route combination against a Cover-2 or Quarters defense.

Miller's route is completely dead pre-snap. It's not even designed to get open, only to force a defensive player into the flat. The only time Wilson would throw to Miller is if the defense was blitzing from the offensive left. They're obviously not doing that (the position of the linebackers is all wrong), so Wilson knows he doesn't even have to look at Miller.

On the right hand side, we have a variation on another very well-known passing concept. This one's called the inverted shallow-snag. In a regular snag the Y (TE or Slot receiver) runs a corner route, while the Z (outside receiver) crosses him for the inside curl. Conventionally the first throw the quarterback wants to make is the tight end about 15-20 yards downfield. With the endzone compressing the field, Bevell's drawn up a variation that works on the same principles, but needs far less vertical space.

Properly explaining how and why the Snag concept works would be an article all on it's one. (One I fully intend to write before I eventually hand in my keyboard). The cliff notes version is that the snag is a zone beater designed to create a pair of "Binds." There's a vertical stretch down the sideline between the deep route and the running back in the flat. There's also a horizontal stretch between that same running back and the guy with the curl route. Depending on precisely what sort of zone coverage is called, there's almost certain to be a defender with two guys at opposite ends of his zone.   Whoever he leaves open is the guy Wilson wants to throw to.

Also, I'm fairly certain that Percy Harvin's route will automatically convert to a shallow cross if the defense tries foolishly to play man coverage and put a linebacker on him. Not that defensive coordinators are often stupid enough to do that, but sometime they are.

No doubt Bevell and Quarterbacks coach Carl Smith went over all this with Wilson long ago. They probably didn't need to though, since the Snag and Curl-Flat concepts are staples in most high school level passing attacks. Wilson had seen plays using these concepts for at least a decade before he ever got to Seattle.

So now that we know what Wilson knew in the huddle, let's take a look at what the defense is showing us pre-snap. 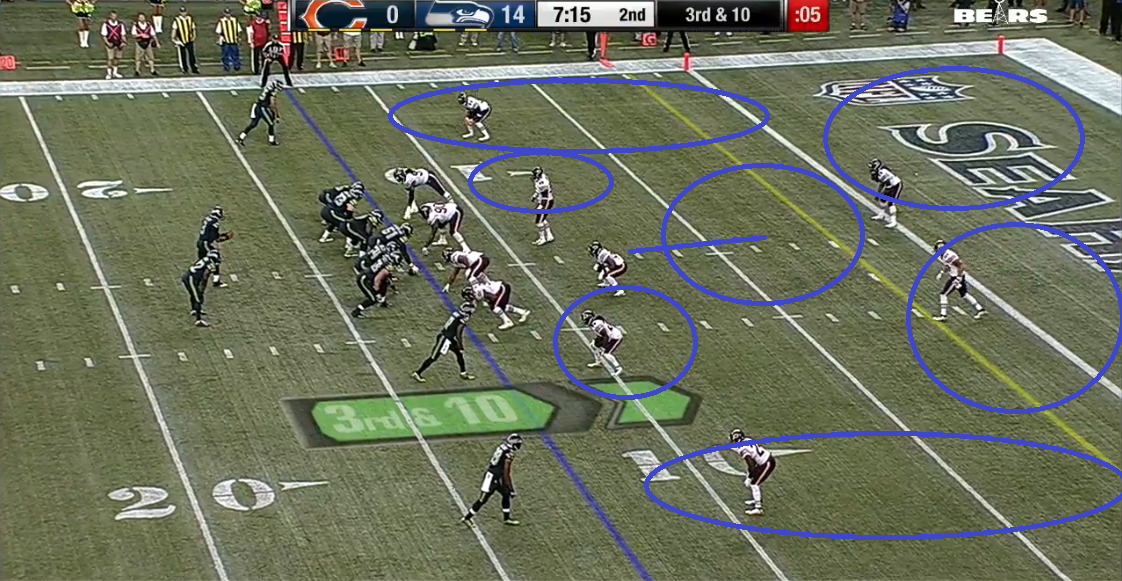 By alignment, the defense is trying to show a vanilla Cover 2. Everyone's lined up in approximately the right spots.  But anyone who's ever played QB can't help but notice the body language of the Free Safety (bottom of the screen). With only 5 seconds left on the playclock, Wilson doesn't have time to adjust the play, or even reset the OL protection scheme. So the safety feels comfortable creeping into the box to position himself better for his post-snap responsibilities. 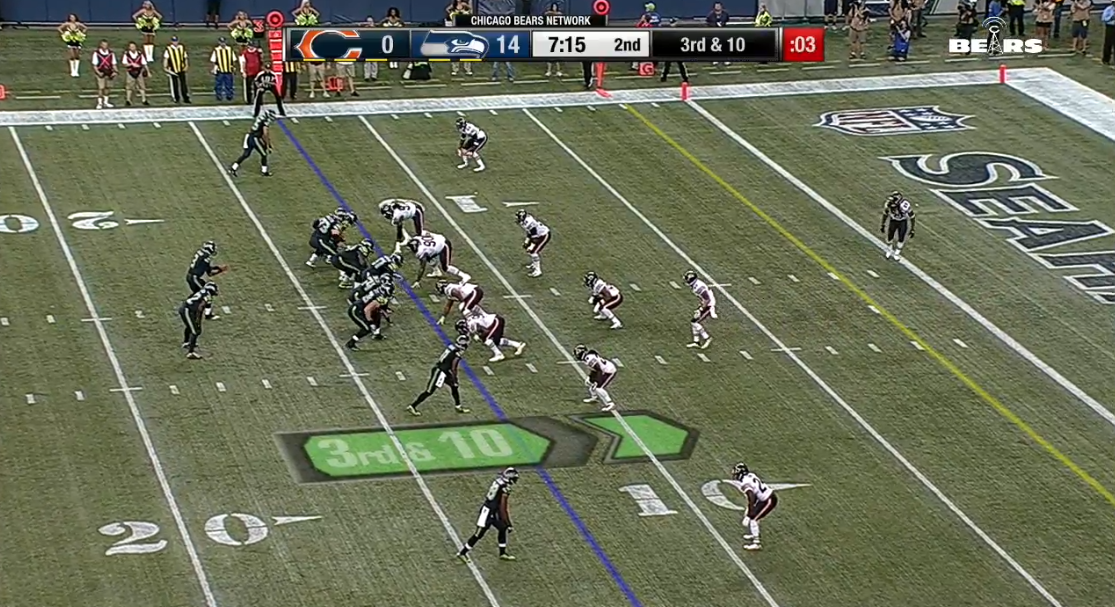 This should look very familiar to Seahawk fans. The LOB often lines up in a way that's very similar to this. It's the correct pre-snap look for either the Cover 3 buzz that we frequently employ, or the defense can play man-free, which is essentially man-to-man coverage with a single safety over the top.

There are other possible coverages from this look, although you're unlikely to see a defensive coordinator tip his hand by playing the kinky stuff during the preseason. Still, Wilson needs to be aware this could easily morph into a Cover 2 robber, or a firehouse blitz. If you want Rex Ryan levels of recklessly aggressive blitzing and weird shit in the secondary, I've diagrammed a half inverted Cover-2 fire-trap below.

Without derailing the entire article to explain one picture, the goal is to make the QB think it's a Cover 3 with a blitz underneath and bait him into throwing to the right flat, where the corner will aggressively jump the first route he sees instead of bailing deep. 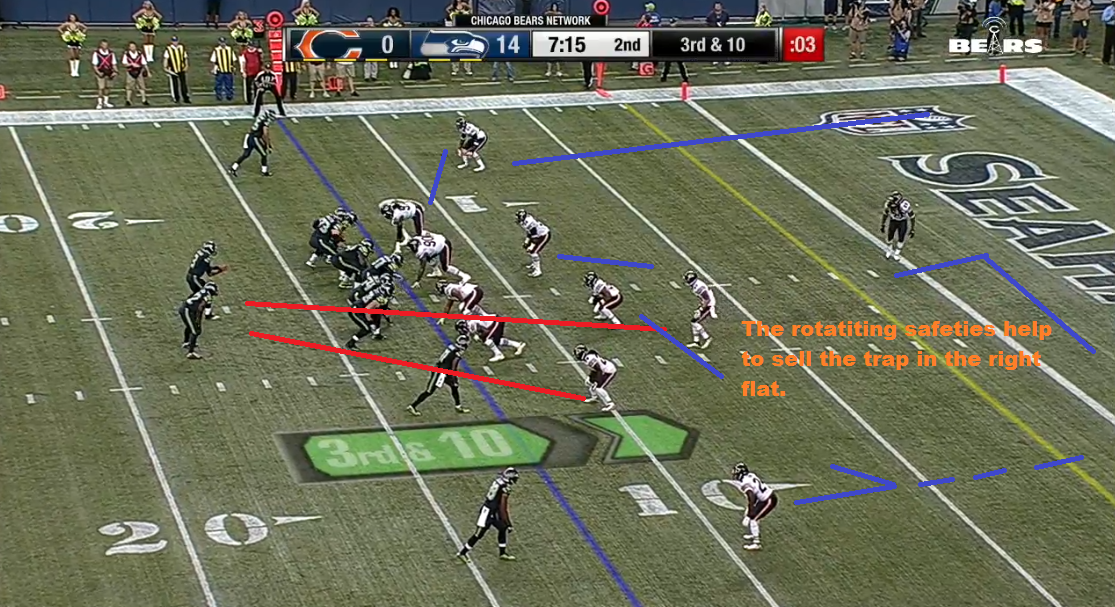 There are a few different (but effective) progressions that Wilson could be asked to move through on this play. I can't say with any certainty what Smith told Wilson to do with this play when Bevell first installed it. What I can do is share how I'd coach it, which (conveniently) happens to mesh with the principles of Bevell's passing game.

The first read is the deep safety. 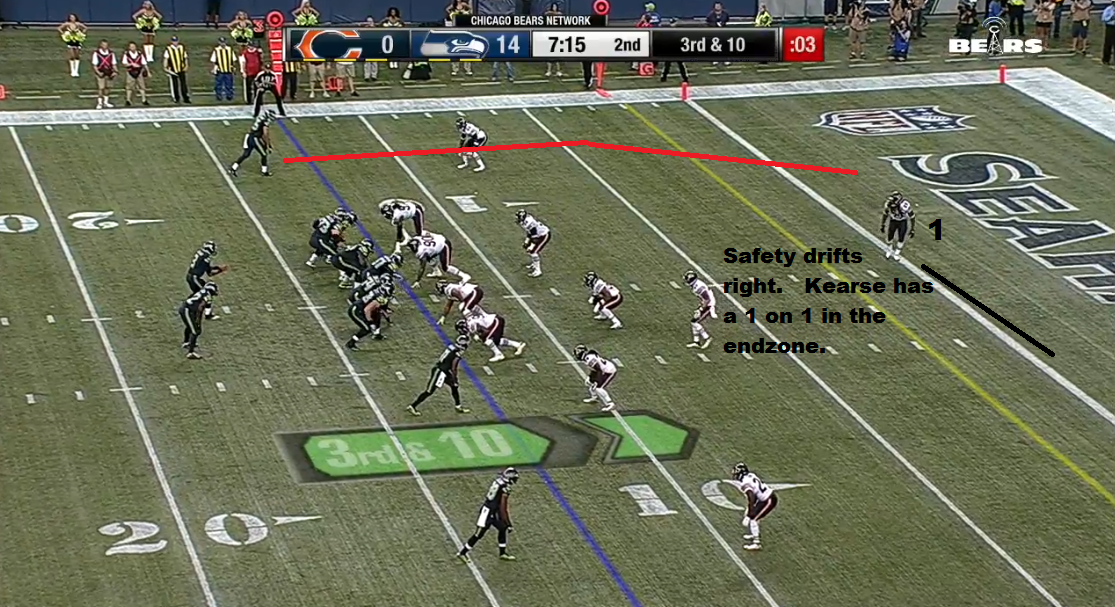 If he drifts to the two-WR side as I've drawn above, Kearse will have a 1-on-1 chance in the endzone. When you have a guy like Jermaine who specializes in making contested catches getting single coverage in the endzone, that's a throw you have to take, unless the throwing lane is clogged or the coverage is exceptionally tight.

Quarterbacks who don't have enough discipline to come off this route when the coverage is too tight end up tossing game losing interceptions in the NFC Title game. But in principle, if the safety drifts right, the throw will go to Kearse about 90% of the time. 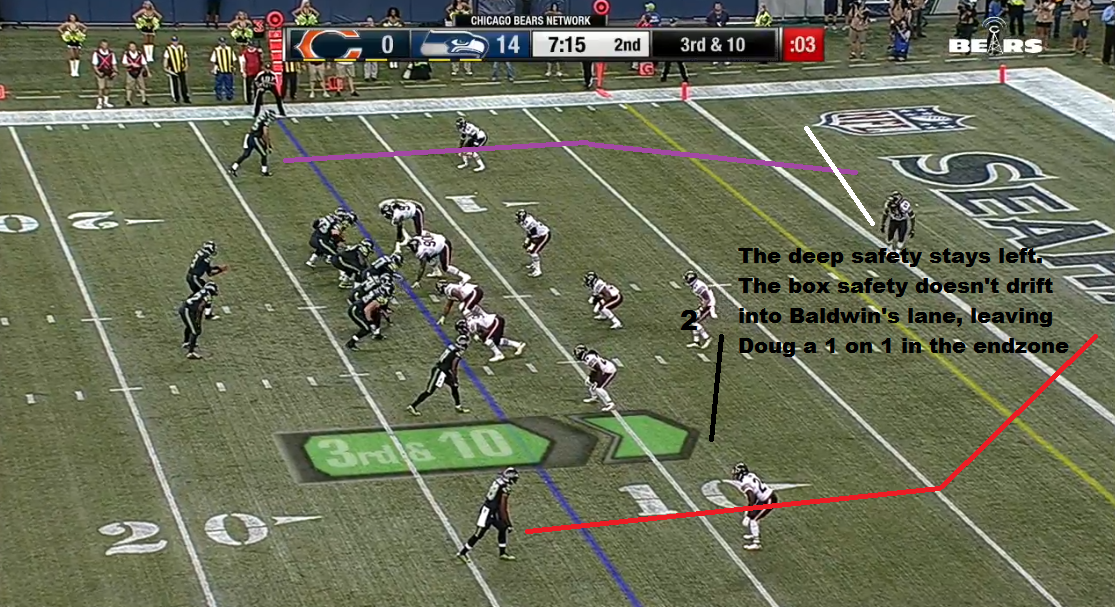 If the deep safety goes left, the second read is the safety who drifted down into the box. This guy can do a whole bunch of things, but only one of them is interesting. He can climb up and into Baldwin's route, or at least the throwing lane. If he does this, Doug will be double-covered in the endzone, and Wilson needs to progress to his third option. If the safety does literally anything else at all, it's Baldwin with man coverage and a chance to score. Wilson should throw him the ball. 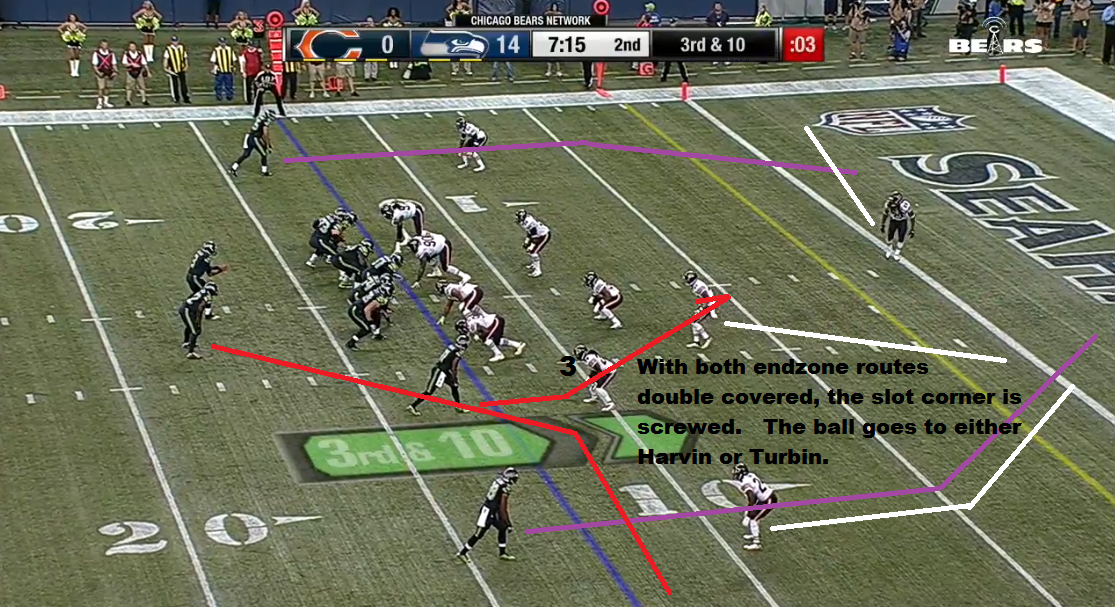 The 3rd read is the slot corner. He's completely boned if it's zone coverage. He needs to sit on the stem of Percy's route, and simultaneously make it out to the sideline to cover Turbin. This is a mathematical impossibility that nature will quickly resolve into six points for the 'Hawks.

Alternatively, it could be man coverage. Harvin has a decent chance of beating the slot CB 1-on-1, although if the CB sticks with him, the better throw is probably to Turbin. In this scenario, he'd be manned up against John Bostic, who has a blazing 4.59 40 speed and poor coverage skills.

I can't say for sure that Wilson was coached to make the same reads I've described and in the same order. What I do know is that immediately after receiving the snap, Wilson visibly checks the deep safety, then locks onto Baldwin's route and delivers an extremely precise throw into the small window where the DB is bodied out of the play but the safety can't drop a mega-hit on Kearse. It's an impressive display of timing, contested catching and precision accuracy.