Taking a look at the counter to the Seahawks' bread and butter defense, and how Pete Carroll has countered the counter.

In the weeks between the NFC Championship game and the Super Bowl, you may remember an overconfident bunch of Bronco fans who had solved the Seahawks defense. It's simple, they said. The way to beat Seattle's cover three is with four verts.

Four verticals against 3 deep coverage is going to ensure some one-on-ones'. If you load one side of the formation with three receivers, it might also pull the FS playside, opening up the possibility of the post on the backside. It puts the FS in spots where he will have to choose precisely which man to take.

Furthermore, the receivers can push their men upfield and come up abruptly to a comeback or hook route. Four verticals especially the way the Broncos run it always leave some options in there depending on what the WR reads. Hell, you might even see a dig if one of the verticals successfully pulls the FS away from that side of the field.

As we saw, four verts didn't create quite the mismatch that Bronco fans were hoping for. That didn't stop Packers fans from having similar hopes, however. Before last week's game, some cheeseheads were looking to four verts to provide an advantage against the Seahawk's cover three defense.

Out of this personnel package, McCarthy can run "All Go Special" and "Curls/Seams". "All Go Special," commonly called "Four Verticals," is the most popular route concept versus Cover 3, because it is difficult to defend four vertical routes when you only have three deep defenders

From that article, here is Packers offensive coordinator Tom Clements running through their All Go Special play:

But again, if four verts is supposed to be a counter to cover three, it didn't show up in week 1.  So what's going on? Are teams attempting to take advantage of this schematic mismatch, and if so how is Seattle countering the counter?

Chris Brown has posted an excellent break down of the four verts play. Here is one of several play diagrams in that post.

As you can see, four verts will have four vertical stems but not necessarily four fly routes. Depending on how the defense is playing, and whether the WR can win his matchup, some of these routes can be broken off. From the same Chris Brown post:

The outside wide receivers run streak reads: first, win deep if you can, but break down if you cannot. They will make this decision at 10 yards, while running full speed. If the defense maintains deep leverage, the receiver must slam on the breaks and come back down the stem of his route (i.e. rather than an out or an in or curl) towards the line of scrimmage.

So how does Seattle do it?

Lets take a look at some examples of Green Bay running four verts in week 1.

Seattle is doing a couple things on this play. First, they get pressure. Pass rush cures all woes, and Cliff Avril's speed rush forces Aaron Rodgers to move. You can see one of the things that makes Rodgers special here, in that he keeps his head down field and is still a threat to pass if coverage breaks down, but any deep throws are now that much more difficult.

Second, Seattle is playing Earl Thomas about 17 yards off the line of scrimmage. You can't actually see him in this video, as I wasn't able to keep him and Rodgers in frame at the same time.  You can see him here as he breaks on a route from the slot receiver.

At this point in the play Jordy Nelson is beginning to break free, but it's far too little too late. Rodgers is being swallowed by the pass rush, and not even Uncle Rico has enough arm strength to keep ET and Maxwell from being able to make a play on the ball that far down field. Thomas effectively kills two of the go routes by staying so far over the top.

A third thing happens here that may or may not be intentional by Seattle. KJ Wright is up in press coverage on Richard Rodgers. If Rodgers reads this as man coverage, it changes what route he'll run. From the Chris Brown post:

The seam reader is taught to take the highest angle through the defense (which eliminates the confusion of Cov two, three, four, etc.). His two caveats are: he must cross the face of any man defender [ed. break inside on a post or in-breaking route] and he must look to the quarterback as he passes by the linebacker (thus, versus a blitz, he looks as soon as he comes off the ball).

It's impossible to say exactly what the read here was without knowing the play, but Rodgers crosses Wright's face off the press and runs a short slant instead of a fly route. Lets take a look at the next example to see why that makes a huge difference in how this plays turns out.

There are two big pre-snap differences on this play. Green Bay has Randall Cobb lined up as the inside most receiver instead of Richard Rodgers, and Cobb does not have any press defender lined up across from him. After the snap, we see Cobb streak down the field before making a slight break into a skinny post about 12 yards down field.

Now we have a true four verts vs cover three scenario, and you can see the bind it puts Thomas and Maxwell in. The two DBs have three deep routes to cover. Earl cheats towards the second receiver, as he has help from Maxwell on the outside receiver and Wagner on the inside receiver. This gamble does not pay off, as Wagner can't get his head turned around and ultimately commits a huge pass interference penalty.

Despite the penalty, Seattle does a decent job of covering this up. Wagner does a far better job running with Randall Cobb than a MLB has any right to. It's really a fantastic play by him, but it's outdone by some fantastic play by the quarterback. Rodgers is able to slip outside of the pocket, avoiding the pass rush and finding some space to throw.

There's a reason many people consider him the best quarterback in the game.

Lets take a look at one last example.

Every cover three play diagram you find is going to look basically the same. Let's steal the diagram used by our friends over at Mile High Report as an example. 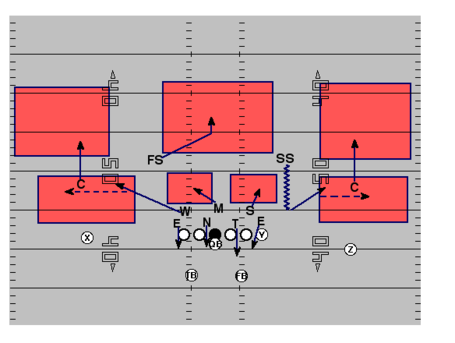 Three big boxes over the top, with four smaller boxes under them. That's cover three in a nutshell. But when we look at the last two examples, we see that the zone defenders in the middle of the field are responsible for far more than their little boxes on the play diagram.

On the previous play we saw Bobby Wagner trailing a receiver over 45 yards down field. On this play, we see Earl dropping 20 yards down field. Depending on the play, the Seahawks defender in middle zone is expected to drop so deep into their zone that the defense is effectively playing cover four instead of cover three.

In addition to this deep drop for the middle zone defender, Seattle again gets great pressure. Rodgers is forced to scramble, and overthrows an a receiver who broke off into a curl after being unable to get over the top of his defender.

So how does Seattle counter the weak points in the cover three defense? I think you can ultimately boil it down to one thing: Team speed.

Look at that, you read all this only to find out something you already knew.

The Seahawks pass rush is able to get home in a hurry.  Even if they're not getting sacks, they're forcing quarterbacks to move. That makes things very difficult for the QB, as four verts is a longer developing play and he's not able to set his feet the way he'd like when delivering a deep pass.

Seattle is also able to do a fantastic job staying over the top. There is more to this than just speed. The Seahawks cornerbacks have great technique and are able to press, re-route, and keep on top of their man. You're asking corners to cover a lot of ground when you put them up on the line of scrimmage like that, so speed is still an important part of what they need to do.

Lastly, Seattle puts freak athletes in the middle of the field. Wagner may have ultimately lost in the second example but the ground he covers in that play, and the receiver that he's able to stick with, is impressive regardless of position. Tackling is also a critical part of this, as dropping deeper into zones requires players to be able to come up and make plays when underneath routes are completed.

This defense is seriously good, and seeing how they handle their weaknesses is all the more impressive.