Last week, user cameronparker7 requested a breakdown of some linebacker play. Cam, this one's for you.

When facing a running play, a linebacker typically has to do one one of three things. Force, Flow, and Fill. These are sometimes referred to as Contain, Fill, Pursue, but I a like alliteration. (read that line with an Italian accent) 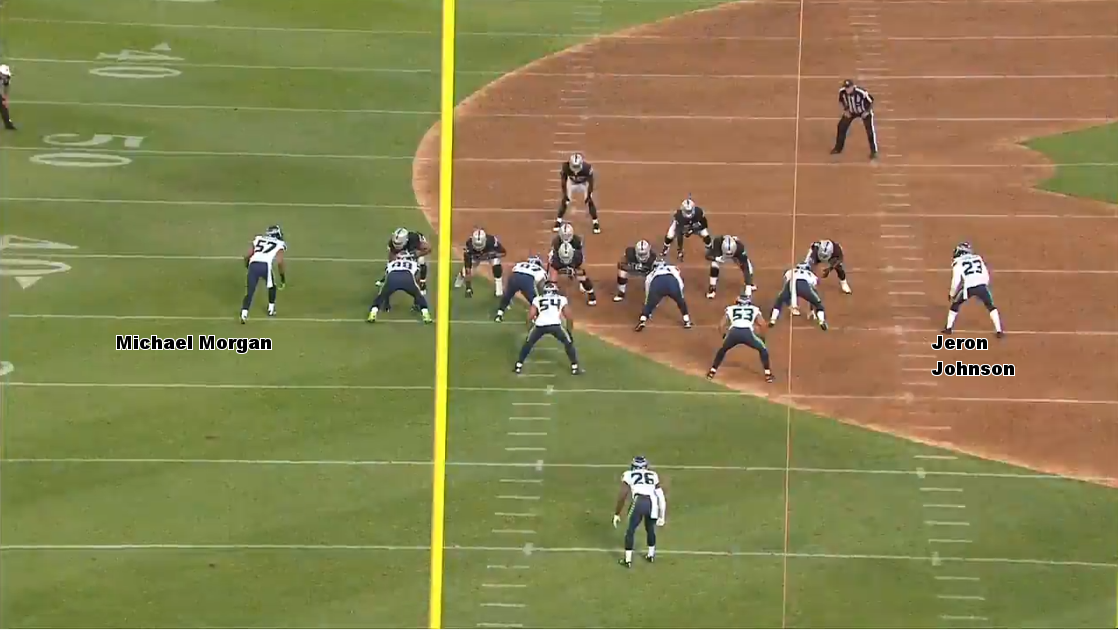 *the SB Nation automatically re-sizes all pictures and gifs included in an article.  To see them at full size, open them in a new tab or window.

In general, there are only four positions that get asked to contain or "set the edge" against a run. Defensive Ends, Safeties, Cornerbacks, and Linebackers. In the picture above, SS Jeron Johnson has containment to the defensive right, while LB Michael Morgan has it on the left.

When setting the edge, it's crucial that the defender not get reach blocked. Good footwork is a must, helping both to evade blocks completely, as well as to maintain outside leverage (keep the offensive player to the inside of the field, relative to him). Also key is using the interior arm to make it difficult for the blocker to cleanly engage. It's the defensive analogue to an RB trying to stiff arm a tackler, except in this case the defensive player is preparing to shed a block and make a tackle!

Needing to stay free to the outside is particularly significant when contain man also has pass-rush responsibilities. When containing outside leverage is a requirement it's very difficult to convert speed to power and impossible to counter to the inside. 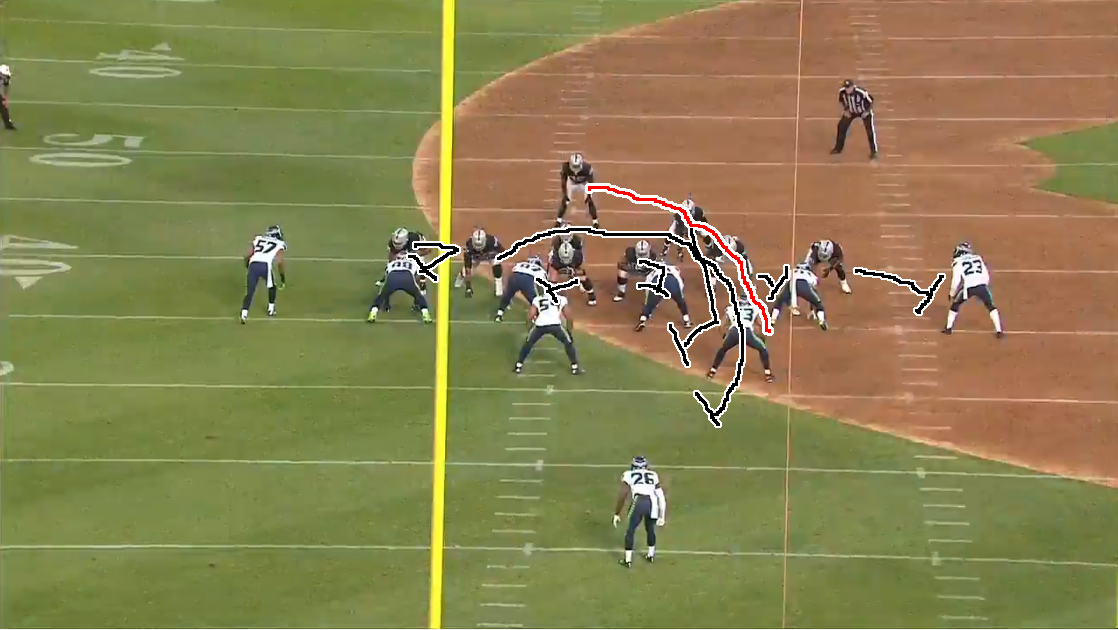 I know this play as "Orange Left, 25 Power Blast". The target is the strong-side "B gap" between the Left Guard and the Left Tackle. The pulling right guard and the fullback are going to come up the hole and "part the seas", blowing up second level defenders and giving the RB an alley. 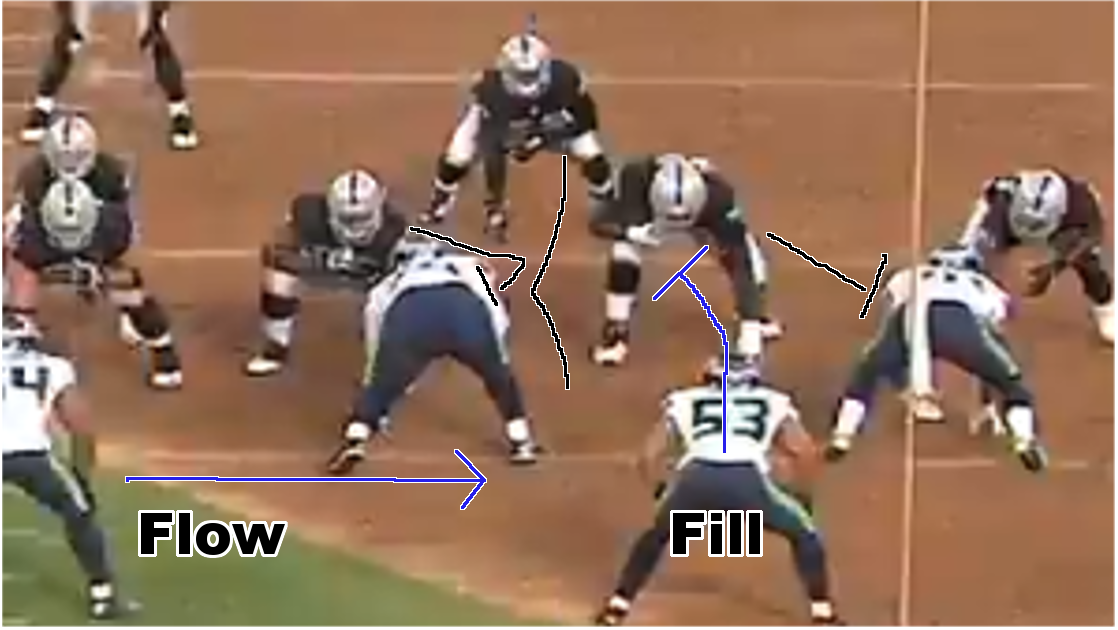 From this defensive formation, responsibility for the B gap is shared jointly by the 3-technique (D'Anthony Smith) and the Sam LB (#53 Malcolm Smith).

When the ball is snapped, Smith needs to first read the offensive linemen to detect that they are run blocking. If he's extremely perceptive, he'll even be able to identify the B gap as the target, based on the drive block by the LT and the hook block by the LG. If he's not, he should at least be able to identify a run towards the right, and the fullback targeting the B gap is another strong indicator that it's the point of attack.

Having identified that the Point of Attack is his hole, Smith's job is to aggressively crash into it. This is not always true, but more on that later..   For now, Smith wants to attack the B gap so aggressively that the fullback can't even help the guard by nudging D'Anthony. If the fullback meets Malcom in the Middle of the hole, things will start Breaking Bad for the offense. The pulling guard will be stuck in the backfield and the RB will have to cut away from the intended point of attack.

So why does Smith want to aggressively crash the hole this time, but not always?

Suppose instead of the play I've diagrammed, the offensive call was a weak-toss with the O line reach-blocking to the right. The fill man becomes Mike linebacker Bobby Wagner. Wagz has both the A and B gaps to that side of the field, and is responsible for chasing the RB to the sideline if he gets past the contain man. With three potential gaps, Wagner can't aggressively fill one, or the RB will cut the run and go up a different gap! Instead he must patiently wait for the runner to commit, and only then attack the hole.

If you aren't setting the edge on the play-side, and you're not the fill man, then your job is pursuit.

Pursuit does not mean chasing down the runner at top velocity every time. This is called "over pursuit" and it's extremely common. However, teams that over-pursue are vulnerable to counters, reverses, cutbacks, and basically anything where the run begins in one direction and finishes by going the other way.

Instead, pursuit players must be disciplined as they flow to the ball. In particular, gap responsibilities change as the play continues to develop. For example, as the diagrammed play first develops, Wagner has both A gaps. If Smith and the fullback stalemate in the B gap (creating gaps B1 and B2) the A gaps will become property of Mike Morgan, while Wagner becomes the new fill man, responsible for meeting the RB (or pulling guard) at either B1 or B2.

I wish I could tell you the coaching points on how gap-responsibility is exchanged on the fly and what the coaching points are. Unfortunately I've never played linebacker, and wasn't able to find this information while researching my article. My best guess is that in most systems, the Fill backer is responsible for every gap at and in front of the the RB's current position. The first pursuit backer takes the two gaps behind the RB, and must also be able to reach the current gap to "clean up" the tackle.

So can we see the whole play now?   Where's your gif Dude?

Unfortunately, the play I drew up was a hypothetical exercise.   It was a still-shot with the perfect combination of camera angle, offensive alignment and defensive alignment to talk about LB play. However Oakland didn't cooperate with my article writing priorities, and those bastards called for something completely different. Believe me, you're happier NOT having to relive what actually happened on this play.

I would never leave you without a gif though. So here's a different play. In it, Bobby Wagner tries to fill when he should have pursued. The result of his error is that a play designed to get 3-4 yards instead picks up 12.