All Sunday long, I couldn't stop remarking to my friend about how there appeared to be a huge discrepancy between Seattle and the rest of the league. The Seahawks snuffed the life out of a tough opponent, immediately picking up where they left off in the playoffs, while several of the league's expected contenders dropped the ball in their Week 1 matchups.

New Orleans debuted their revamped defense by blowing a 20-10 lead at half to the Falcons, as did the Patriots. The Bears' high octane offense only managed 20 points against an undermanned Bills team, the Eagles were caught napping in the first half against the Jaguars, and the Chiefs were crippled by what appears to be a pretty woeful offense. Even the Niners and Broncos, who rushed out with dominating first half performances, had questionable second halves.

It's just one week, and even a team as great as last year's Seahawks had multiple forgettable games, but it was a week where Seattle looked to be in a league of their own.

Jordan Hill is a starter.

On the first defensive snap of the game, Seattle fielded a defensive line of Cliff Avril and Michael Bennett at defensive end and Kevin Williams (3T) and Brandon Mebane (1T) at defensive tackle. But, on a team that heavily rotates their defensive linemen and uses subpackaging, identifying the nominal starters isn't especially insightful.

If we're naming starters based on usage and importance, Jordan Hill easily supplants Kevin Williams on the list. Hill played 9 more snaps, 33 to Williams' 24, but to me his role in Seattle's passing down subpackage is what cements him as a starter. This group featured Avril and either Schofield or Irvin as defensive ends lined up wide of the tackle, Bennett as the 3T, and Hill as the 1T.

Hill played pretty well in this role and should continue to do so over the course of the season. He's active and quick enough to penetrate and strong enough to collapse the pocket when doubled. In addition to being the 1T in the pass rush subpackage, Hill also filled in as a 3T and 5T in the base defense.

Seattle's first use of the two gap 5T, Red Bryant's old role, came with about 4 minutes left in the first quarter and didn't make many appearances throughout the game. A base role last year, it was primarily used as a subpackage for short yardage situations. In place of the 5T, Bennett and Avril were lined up more as standard defensive ends.

It will be interesting to see if this was just an adjustment for an opponent or the new normal. Seattle used a lot of nickel to counter Green Bay's multiple wide receiver sets, which could account for the decrease in use (as well Hill's high snap count).

Avril and Bennett would frequently line up wide and very close to each other on pass downs, like so:

I think the idea was to increase the threat of stunts, but had mixed results. Green Bay read most of the stunts well, and the two were too bunched up with rushing normally.

Seattle used a little bit of an amoeba look on a couple plays, moving O'Brien Schofield around and having him rush or spy. 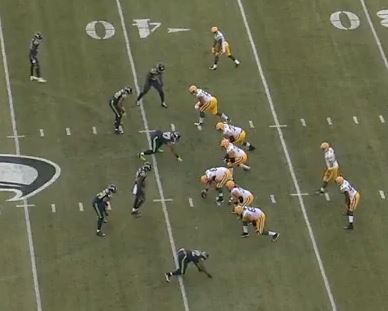 Seattle even blitzed from a 34 look.

Bruce was transitioning speed to power all over the place. Great start to the season for him.

The emergency fill in.

Not much to say about Marcus Burley, other than he looked pretty decent. Was pretty sticky on Cobb a couple times, and didn't seem to be too lost in zone. A couple times he seemed a little late in rotating to a spot, but overall I'd say he performed well considering his short time with the team.

Both James Carpenter and JR Sweezy received quite a bit of praise for their performance on Thursday. While both played well, Carp really stood out to me.

Carp basically dominated in this game. He looked fantastic throughout, displaying both the power and nimble feet that presumably attracted Seattle in the first place. His power was especially apparent, as he bull dozed and rag dolled defenders on a couple different occasions.

Even in pass protection though, Carp looked much improved.

He did get in trouble lunging a couple times, and picking up assignments in the second level will never be his calling card. But all in all, Carp lived up to the training camp hype.

I don't have much to add here that hasn't already been said about Percy, but I don't feel like you can talk about this game without at least mentioning Harvin.There are very few players that can influence the game the way Percy does by just being on the field.

I came into this season crazy excited for this team, and week 1 only built on that excitement. The Percy offense didn't disappoint one bit, and there is a chance Richard Sherman goes an entire year without a target. Watching this season unfold is going to be amazing.