Honestly the last few months of my life have been so crazy that I didn't have a lot of time to "concern" myself with what the outcome of Seattle's "Kickoff game" against the Packers would be. It was only a couple of weeks ago that it even really registered with me that the game was happening, and it wasn't until early Thursday morning that it hit me that a game was actually happening that night.

A Seahawks game. A Seahawks game with consequences, and stats, and points, and all the trappings of real regular season football. Then I actually had to start considering and contemplating what would happen in the game, and as if I was mainlining rainbows, a realization rushed over me all at once:

Seattle was gonna win this one pretty easily.

The only player on Green Bay that honestly had me even the slightest bit concerned was Eddie Lacy. I mean, Aaron Rodgers could be the best quarterback in the NFL, but that has honestly not helped anyone over the last two years when facing the Seahawks. By chance, Seattle has faced a slew of good, great, and elite quarterbacks over their most recent games, and not a one has really done much in those contests.

In fact, not much on the defense has changed since Rodgers faced Seattle in Seattle two years ago. It was Week 3 of 2012, Russell Wilson was playing in his third career game, and the Packers rolled into the northwest with high expectations for a Monda night. Seahawks fans were shaken with nerves headed into a game long before they had established themselves as the dominant force they would become much later, but Rodgers was sacked eight times in the first half and Seattle led 7-0 at the break.

Maybe the offense was frustrating at best under the guidance of the rookie we had no idea what to make of, but that defense... we were completely right about that defense. Green Bay was able to move the ball on the ground with Cedric Benson in the second half, and eventually scored 12 points on a pair of field goals and a touchdown run, but still the point would be made about how many points would be made against Carroll's D.

So, what's changed in two years?

The Packers replaced Benson with Lacy and seen the emergence of Randall Cobb, but otherwise lost James Jones, Greg Jennings, and Jermichael Finley. It was illogical to expect them to score many more than 12 points again, so what else has changed between these two teams?

Well, the Seahawks the emergence of Wilson, who is now posting a passer rating over over 106 since the second half of his rookie season, added Percy Harvin, lost Golden Tate, and are completely healthy on the offensive line. Overall, Seattle's offense has improved, Green Bay's offense is about the same, Seattle's defense is much better, Green Bay's defense was 31st in DVOA last year.

There are games where extreme confidence should be stifled, like at Carolina or at San Francisco, but a home game against the Packers, a team that is practically built to be destroyed by the Seahawks strengths, was not one of them. I tweeted hours before the game that I felt like it would be close early, about 10-7, before the Seahawks pulled out a win of maybe 24 points.

Seattle led 10-7 in the first half, and ultimately won 36-16. And for that, I'll tell you the same thing I told Dracula when he asked what that banging noise was that I was making outside of his coffin:

Now switching classic horror monsters, let's make like an attack on a werewolf and bullet: 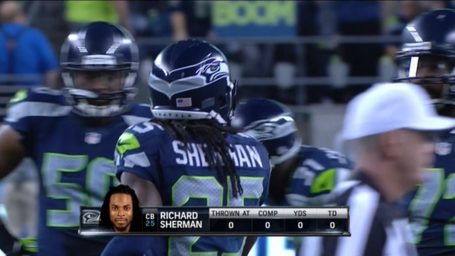 It's probably a combination of both, but honestly this is another reason the game was over before it started. Rodgers ended up finding a lot of space within 15 yards, but plays rarely went that far, let alone deep. Take Jordy Nelson for example, who finished with nine catches for 83 yards. Decent for your fantasy team, but short of Nelson's expectations for one long reason.

Nelson's longest reception went for 16 yards. Nelson had 29 plays of 17+ yards last season and his 14 plays of at least 30 yards was tied for the most in the NFL. By shutting Green Bay out of the rhythm that they're used to, just like they did with Denver in the Super Bowl, playing defense was practically easy* on Thursday.

And the fucked up thing is that in football you're supposed to feel the rhythm, feel the rhyme, but you threw at Sherman, zero times.

- *Well, obviously it wasn't that easy.

The Seahawks missed 12 tackles, their worst performance in that area since the loss to Atlanta in the 2012 playoffs, per ProFootballFocus.

In those games against some of the best quarterbacks in NFL history, some against a few of the best ones in the league today, and Eli Manning, consider for a moment that only twice did the defense allow more than 200 net yards passing: Drew Brees had 309 passing yards in the playoffs (on 43 attempts, only one touchdown) and Manning had 280 in the Super Bowl (on 49 attempts, with two interceptions, and mostly when the game was out of reach.)

We've seen defenses thrive on bad competition, but Seattle appears to be getting stronger against stronger opponents. Next week: Philip Rivers.

- The Chargers were the only team worth a worse defense last year than the Packers, by DVOA. I am confident, even if the game is in San Diego.

- People scoffed when I suggested that Ricardo Lockette's "over/under" for catches this season was 27.5. He caught two of three targets on Thursday. Jermaine Kearse caught one of three. Doug Baldwin caught three of five for only 14 yards.

Lockette is actually going to play receiver this year and he's off to as good of a start as anyone besides Percy Harvin.

- As a writer for Rolling Stone magazine once said:

Harvin moves through traffic like Sandra Bullock driving a bus.

Hi guys, here's what I wrote for Rolling Stone on the Seahawks yesterday.

- Marshawn Lynch had his 20th 100-yard game since the start of 2011, most in the NFL. Last night he accounted for seven missed or broken tackles; consider that last season he led all NFL running backs (and therefore all players) in that category, with 75. He's already well on his way to matching that.

- The idea of a repeat is still a long ways off, but the first game of the season is excellent evidence for at least one hypothesis: That Seattle is the best team in the NFL. Fans of other teams call it "arrogance" when Seahawk fans even suggest such a thing, saying they preferred us when we ere "lovable losers."

No, you just preferred Seattle when they were losers.

If you switched the jerseys on all 53 players to "San Francisco" or "Indianapolis" it's not as though the fans in those towns would still be telling everyone to calm down about how hyped Wilson, Sherman, Thomas, and Harvin are. (Here's one interesting fact though: Lynch has always gotten a pass in every conversation I've ever had. Everyone loves Lynch.)

Most of all, they'd see that Carroll has built a team that's just as ready to compete for a championship this season as they were last. And most likely they will still be in this position in 2015, 2016, 2017, and perhaps even so on. It doesn't mean that Seattle ever will win a title again, but clearly the last ~50 games are not a fluke.

Yeah, it's pretty much been boiling for that long, though admittedly the last 30 or so is when things really started to cook.

The Seahawks handed Aaron Rodgers and Mike McCarthy one of the worst losses of their careers. Will they still be this potent in January, let alone December? I can't guarantee that. Am I in a rush to find out?

Nope. The offseason is finally over. Seahawks football is finally back.