Share All sharing options for: 2014 NFL Pro Bowl rosters to be announced tonight at 6PM PST

The NFL will announce the players for the 2014 NFL Pro Bowl tonight at 9PM EST/6PM PST. According to an NFL release:

The 2014 Pro Bowl players are revealed exclusively on NFL Network Friday, December 27 at 9:00 PM ET on the NFL Total Access Pro Bowl Players Revealed show. Andrew Siciliano hosts the one-hour show, along with NFL Network analysts Darren Sharper and Daniel Jeremiah providing draft rankings, their thoughts on those that made it, and who they believe should have been selected.

Throughout the show, Pro Bowl captains Deion Sanders and Jerry Rice provide their analysis of each player and give insight into their draft strategy. Additionally, a few newly-selected Pro Bowlers join the show to provide their thoughts and reaction to being selected.

As you may have heard:

For the first time ever, the Pro Bowl is "unconferenced." This year, players will be selected without regard to conference in voting by fans, coaches and players, and will then be assigned to teams during the first-ever Pro Bowl Draft Wednesday, January 22 at 8:00 PM ET on NFL Network.

So, in other words, we'll know which players are in the Pro Bowl, but the actual teams they're on will not be known until January 22nd.

As for the Seahawks, Seattle is well-represented in fan voting thus far. 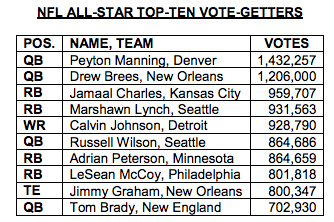 Marshawn Lynch is fourth overall in votes and Russell Wilson is sixth. In terms of per-position votes, Kam Chancellor (SS), Earl Thomas (FS), Richard Sherman (CB), and Max Unger (C) are the leading vote getters. Lynch is 2nd among running backs, Steven Hauschka is 2nd among kickers, and Jon Ryan is 2nd among punters. As you can see above, Russell is 3rd among QBs. 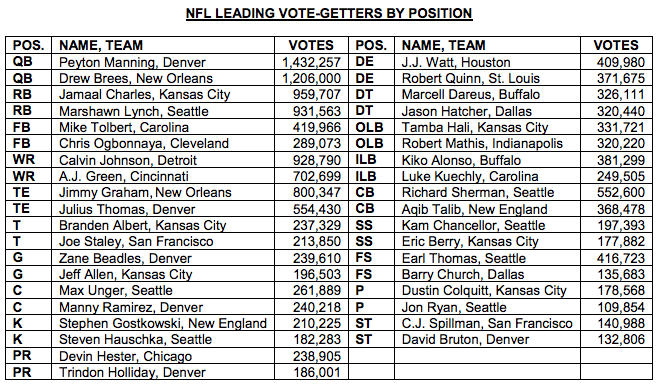 In terms of other players that may (or could/should) warrant consideration:

DT - Brandon Mebane: Consistent, reliable force on the interior. Often finds himself in the backfield and disrupting run lanes. Part of a rotation on Seattle's D-Line but a very good player.

DE - Red Bryant: Again, part of a rotation, but a force on the outside in Seattle's 4-down formations and solid interior presence in their 3-down Bear fronts. Won't get consideration because he doesn't get sacks, though.

DE - Michael Bennett: 7.5 sacks, moves all over the line, allows Seattle to be very multiple. Fifth in NFC among 4-3 defensive ends (per PFF) in QB hits with 16, ninth in NFC in QB hurries with 38. Obviously, stats alone aren't going to earn him a Pro Bowl berth but he's very important to Seattle's defensive scheme and success.