The Broncos are wearing orange.

The Seahawks have worn this combination twice this season, at Atlanta (which was a convincing 33-10 win) and at the Giants, a more convincing 23-0 win on the same field that the Super Bowl will be held. Because I'm sure that you were wondering, I actually really like this combination for its aesthetics, and obviously the track record for this combo this season is a solid 2-0 and a combined 56-10 score.

As Scott Enyeart points out, there's been an emphasis on replicating everything about that mid-December Giants trip, from staying in the same hotel to wearing the same uniforms. Make it as comfortable and familiar feeling as possible. This is no accident on the Seahawks part, and in fact, because the NFL determines where the each team will have to stay for the Super Bowl, on their last trip in Week 15, per Enyeart, the Hawks inquired where it would be, for "when they come back." Love it.

For your viewing pleasure, here is Marshawn Lynch on MetLife Stadium's field: 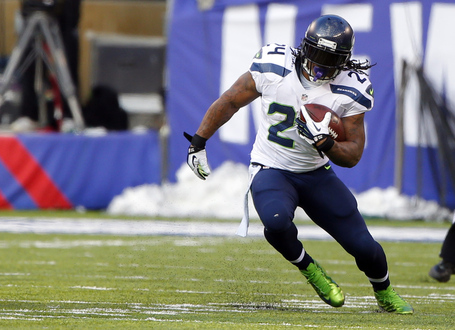