The NFL announced the 2013 NFL All Pro Team and three Seahawks made the cut. Both Richard Sherman and Earl Thomas were named First Team All Pro for the second year in a row, and Kam Chancellor was named Second Team All Pro at safety, his first All Pro honor.

Marshawn Lynch somewhat surprisingly did not make the cut as a Second Team All Pro despite his NFC-best 14 touchdowns, ceding his spot on the team to rookie Eddie Lacy. Lynch was a First Team All Pro in 2012 and while he's had an inferior year statistically to '12, he's still playing at a high level, in my opinion.

Here in Seattle, people will likely view this as a snub, and while I'm not overly concerned either way, if you look at the stats, Lynch has the Packer beat in yards per attempt, total yards, total touchdowns, and receiving yards. Matt Forte probably has an even better argument to be on the Second Team over Lacy, for what it's worth. I don't get worked up about AP All Pro honors, but that was the one choice that I found a little interesting and worth looking at. 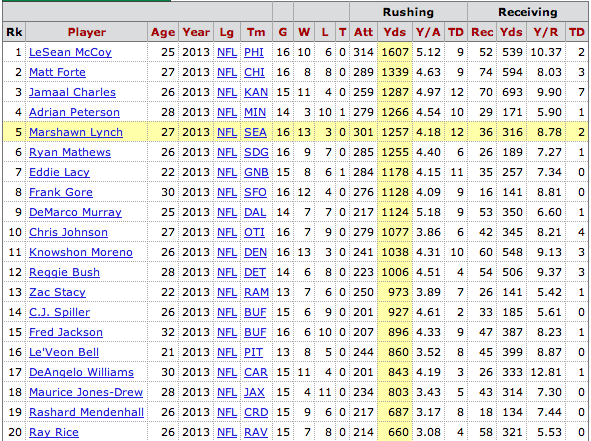 As for the rest of the teams, I'd say things look about how you'd expect. I was interested to note that Patrick Willis was omitted, and it was a little surprising (maybe?) to see that Josh Gordon was First Team All Pro. Showing that there is justice in the world, Lavonte David was named to the First Team as an outside linebacker.

One notable thing about all this was that there was no Second Team All Pro Quarterback this year. This seems to indicate that all 50 AP votes went to Peyton Manning. Which makes sense.