Rapping with The Drunkard: The New Orleans Saints Part Doo

You're not French, shut up.

Share All sharing options for: Rapping with The Drunkard: The New Orleans Saints Part Doo

The most fascinating drunk guy at this bar is back, and he's going to tell you why the Saints should probably not even take the field, and go someplace safer. Like the inside of an active volcano.

They are using gold laces instead of black.

They are drinking grape Gatorade, instead of Arctic Ice Blast Oral Fierce Rush.

They all turned their hats backwards.

They tried to find their testicles, in order to approach this coming battle with the type of masculine fortitude that it requires, but they were unable to. Why?

Because on December 2nd 2013, The Saints were castrated, and their empty, lifeless fleshsacks were tossed into a bin marked "Useless Refuse" that now sits gathering dust in an unnamed room deep in the bowels of Seahawk Citadel that nobody knows exists or even cares to think about.

The Saints have tried every tactic known to Man. They have sampled every trick, gimmick, and ploy that their massive (not that massive) brain trust can formulate. Yet, for all their chicanery, there is one stratagem that they have failed to employ...

They forgot to write a new gameplan.

Listen ladies and germs; pop a squat so I can rap into your hear-holes for a minute. A lot of times, when we are sitting around here sipping on brews and sawin' away on this log called Life, I will give our opponent the benefit of the doubt. Every force in the Thirty-Two Kingdoms has a chance of winning, and on any given Sunday, a team can come out on top.

But this game is played on Saturday, and The Saints have absolutely no chance.

What can they do? They will try to orchestrate an aerial assault, and attack us from long range. But with the turf-consuming speed of the ever rapacious Earl Thomas, the Saints will not be able to find a chink in our anti-attack batteries. The icy-eyed calculations of our Thought Police, led by Richard Sherman, will be aware of whatever subterfuge The Saints are attempting to employ before it even leaves the line of scrimmage. They will attempt to feed their giant, Graham, forgetting that we will unleash a murder of Seahawks into their scheme.

The Saints, such a funny word to describe this force. What is a Saint but a paragon of virtue and holiness, designated by an arbitrary force attempting to indoctrinate us into their dogma? We see you Saints. We see you marching onto our lands, shofars caterwauling, banners flapping in the moistened air. We see you, with your swinging braziers, as you attempt to pull our people into your fold. Well, we have drawn a line here, and we will allow you to move no farther. The crown of the Thirty-Two is ours, and there is no room for your doctrine in the brutal hearts of The People of the Northwest.

Kam Chancellor, our Freedom of Religion Act, leads a brood of fang-filled monstars careening into your hordes, lopping off limbs with the efficiency of a lochaber. The Deathbacker has a thirst for the righteous, but he will need to be content feasting on the inadequate life forces of New Orleans.

And should you begin to succeed, should your pervasive teachings coagulate into a choking cloud of particulate matter, bent on suffocating us with its zeal, then we will have no choice but to reply in kind...

Do you see him? Just right over there. Yes, the darkened blur, that's him. He sits on the bench, somehow looming over those who dare to stand too close. Your eyes cannot seem to focus on him; they slide off as soon as they are turned his way, as though fleeing in terror. Steam rises from his hulking frame amidst the ever-present rain drops. Two piercing white orbs gleam from the shadows of his visage. You know him in your own tongue as "Bestia", and stories echo down through eternity of the destruction he has wrought upon your lands. Saint moms cajole their Saint children with his name, and old Saint men whisper stories about him in the comfort of well-illuminated Saint circles.

Around here, we just call him Marshawn.

He hungers. His nostrils flare, as the scent of the perfumed hordes creeps closer. He stands, chains clinking in joy at the prospect of the coming war.

I know you are afraid of numbers, Saints fans. I know that you fear the truths hidden in the secret language of that ancient script. But I must warn you, as we sit here over our beers, that you are right to be afraid. That The Beast comes for you...

And you shall know him by his mark. 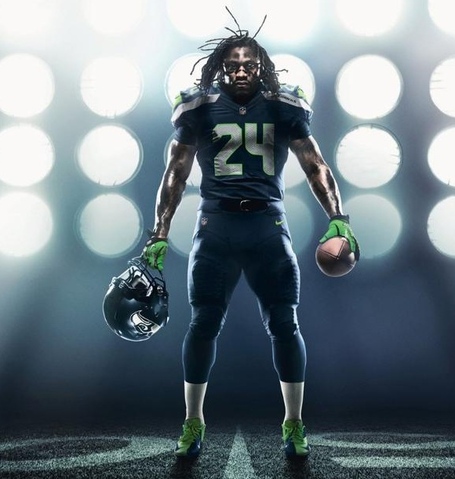 Alright, enough is enough, boys and ladies. Let's get to breaking down the film.

The Saints are feeling pretty good after their dominating win in Philly.

In the eyes of Saints fans, their air attack was a thing of beauty.

While the rest of the nation thought it looked, well...

Saints fans have called us disrespectful in the past, and accused us of not acknowledging their superiority. And I gotta say, they're kind of right.

Sometimes, we are downright disrespectful.

It will be nice of us to greet them as they come into town. Just to give them a prelude of how the game is going to go.

Saints fans have also called our brand of football "archaic", but what they have not figured out, is that we are beating teams using 20% of our Offensive playbook. I expect things to look very different Saturday.

Our Offense will come out of its shell, and go into full Attack Mode.

Meanwhile, The Saints will run their patented play against us.

Percy will be reborn in the Playoffs

And Russell will do his thang...

Meanwhile, The Saints D will try their hardest to bring down Marshawn, this time.

And our Defense will be feasting on a weak, Southern team.

And thus, we shall coast on to victory.