Tight End: The Gangster of Love

Breakdown of the Tight End class for the 2013 NFL Draft, with Seattle Seahawks needs/tastes in mind.

Share All sharing options for: Tight End: The Gangster of Love

When you’ve built a team through the draft as well as John Schneider and the Seahawks have, going into their fourth draft in Seattle, there aren’t many "needs". The team will lose very few to free agency this offseason, and they’ve rolled over enough cap space that our FA (or select players coming from other teams) can be signed and still remain under cap. This allows the team to use the draft to take best-player-available in most rounds, and simply improve the roster’s depth (we could see 2013 Hawks in a similar place as the 2012 49ers, and barely play their entire draft class).

Whereas, at the beginning of the season many people thought the Hawks needed to "get more offensive weapons", the rapid ascent of Russell Wilson has lessened that sentiment. Like many of the teams that feature some of the best QBs, the weaponry we already have looks a whole lot better when the QB knows how to aim. I, certainly, am okay with heading into next season with the starting receiving corps we currently have (Sidney and Golden outside, Doug in the slot, and Zach as every down TE). Moving forward becomes about tweaking things…adding guys with specific skills that can, therefore, add new wrinkles to the playbook. Much like Wilson has described the ZRO as a "changeup," the Hawks can also now look to add a slider, a cutter, a knuckleball, etc.

A few of the player "types" I think Pete Carroll has been consistently seeking since he got here are: 1) the burner…a player like Ricardo Lockette, who can just flat-out fly and stretch the field, 2) the big-slot WR…this was Mike Williams, this was Kris Durham, maybe Braylon Edwards, 3) the Joker TE. We’ll take a look at the latter now, along with this year’s TE class as a whole.

Danny Kelly wrote this great piece on the Joker back in April, and it gives the general idea of some of the differentiations. It’s a guy that sacrifices some on the size and blocking ability, in exchange for speed and mismatches. The absolute Joker-prototype in this year’s draft is Jordan Reed. 6’3"/243 with 4.5 speed…not only does Reed have near-identical measurables to Aaron Hernandez; they both come out of the same Florida program. A lot has been written, and will continue to be written, about Reed, and I fully expect him to become a high-to-mid second round pick. He’ll be a little too pricey for the Hawks. 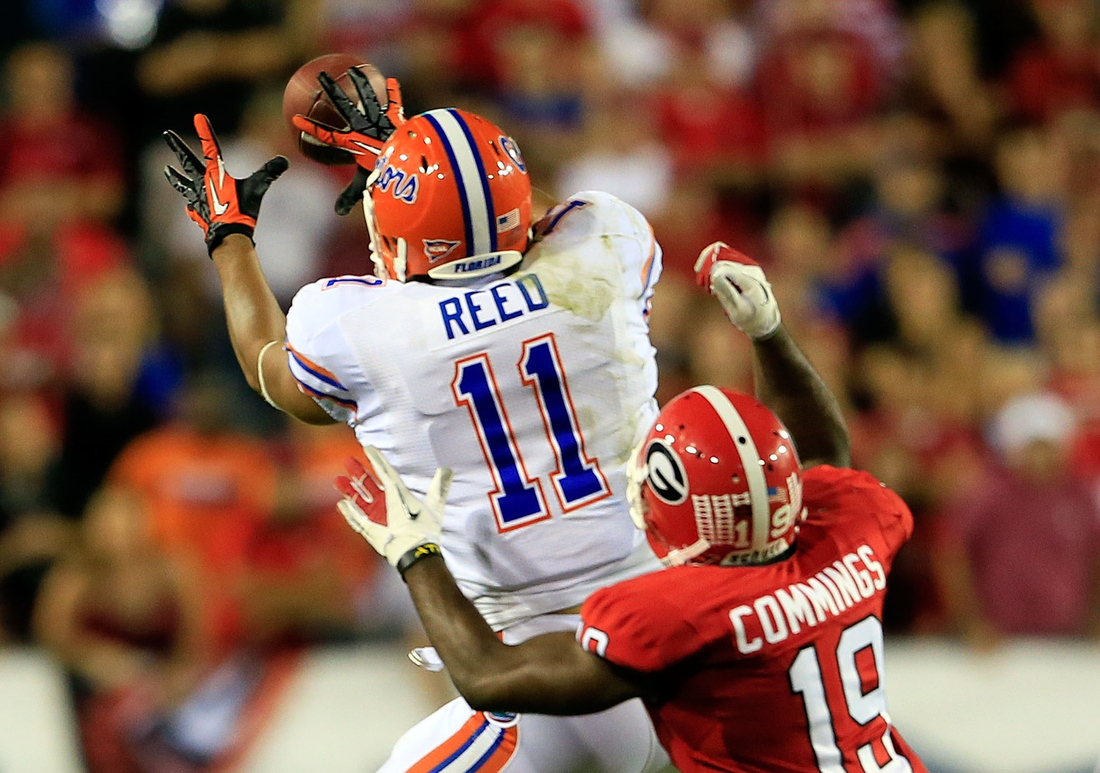 If I filter TEs by speed, the top guy on the list is Arkansas’ Chris Gragg. Another 4.5 player, Gragg also has a similar build to Reed at 6’3"/236, but, on film, Gragg doesn’t have near the same elusiveness as Reed (Reed is, by far, the best run-after-catch TE available), and far too many drops. Gragg is a much better blocker though. In his senior year, Gragg finished with 22 catches for 289 yards (13.14 YPC) and 3 TD. I generally like to include yards-per-catch when studying TE’s because, assuming most TE’s run similar route trees, the YPC can tell us they’re either running deeper routes, or they’re doing more after the catch.

The TEs, this year, that had the highest YPC numbers were (in order): Blake Jackson (a Junior out of Oklahoma State), Clive Walford (a Sophomore out of the U), Ryan Griffin (Senior from UConn), and Travis Kelce (Senior from Cincinnati). All four of these players finished the year at over 16.0 YPC. And, of the three draft-eligible, the most highly touted is Kelce.

Kelce was a guy I hadn’t watched much film on until Cincinnati played in the Belk Bowl this year. When Kelce sprang an 80 yard TD catch on Duke, late in the game, he basically wrapped up the win for the Bearcats, and simultaneously became my favorite TE in this class. It was THAT stunning. Of course Eifert and Ertz are up there (deservedly…and I prefer Ertz), but in terms of where he is projected to be drafted, Kelce gets the nod for me because of the value he presents. 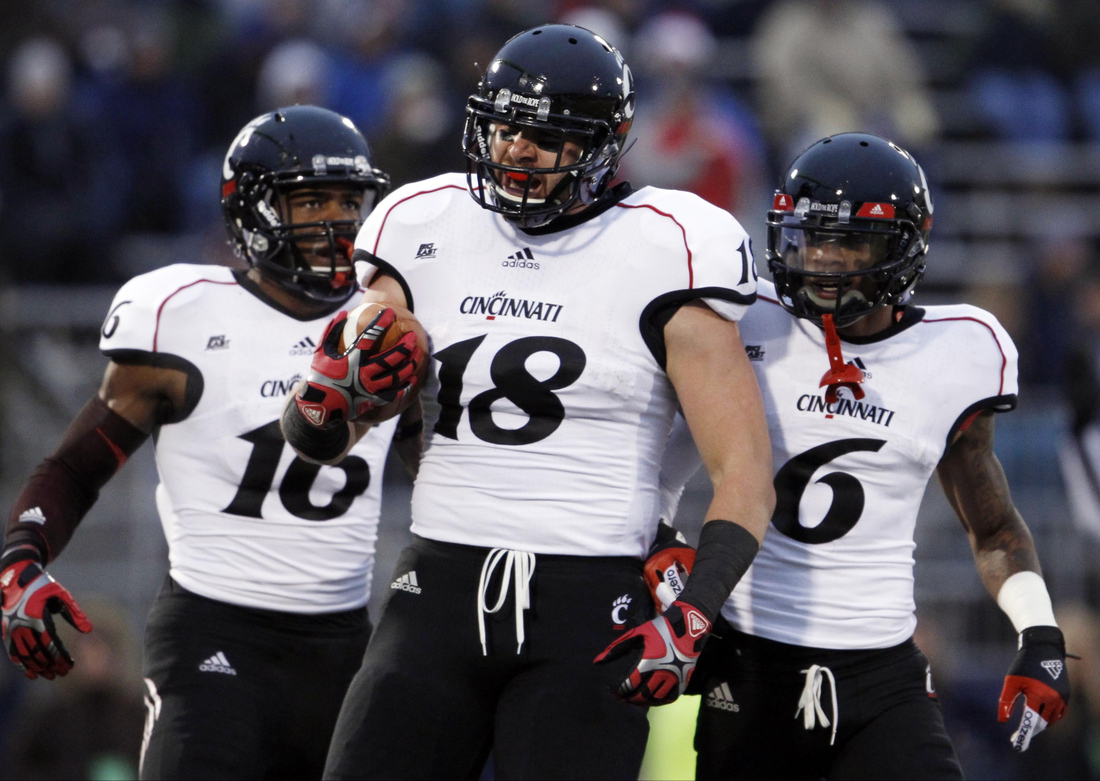 NFLdraftscout.com currently has Kelce as their 4th-rated TE (behind Eifert, Ertz, and Reed), the #103 player on their big-board, and a 3rd-round draft projection. At 103, Kelce would still be on the board when Seattle drafts at the end of the 3rd (and, coincidentally, draftsite.com has the Hawks taking Kelce with pick #88 on their current mock). I, personally, think that’s low. I can’t see him lasting that long. But I do see Kelce on the board longer than Eifert/Ertz. I don’t think his skills are much less than the top two. Statistically, Kelce went 45/722 (16.04 YPC) and 8 TD…Eifert: 50/685/13.7/4TD, Ertz: 69/898/13.0/6TD. Kelce is sort of the Bobby Wagner to Eifert/Ertz’ Luke Kuechly: arguably a degree lesser of a player, but available a full round later? That’s value. That’s Hawk drafting 101.

Kelce lines up on the outside with the Duke safety coming over to cover. At the snap he just leaves on a simple go route…and it’s not the route that impressed me, it’s the run after catch. Kelce is running away from DB’s. And the dude is 6’6"/260!! This catch, btw, is the only 80-yd catch by a TE in all of college football this year (Kelce is also tied for 2nd amongst TE in catches of over 30-yards). So his draft stock is going to climb, and we may find Kelce too pricey for a Hawks’ (quote-unquote) backup TE.

More in line with the Hawks’ price-range (which I would put in the 3rd-5th range)?? This is the range where we find Ryan Otten, Gavin Escobar, and Michael Williams. Williams is not a guy that much was asked of at Alabama. He was McCarron’s check-down buddy all year; finishing with 24 catches for 183 yards (a pathetic 7.3 YPC). So there’s nothing on paper or film to suggest Williams is a Joker candidate. The other two guys aren’t necessarily jokers either, but both are still pretty intriguing.

Escobar is a pretty traditional TE out of San Diego State: every bit of 6’6"/255 with decent speed. But, if I’m throwing a jump-ball in the redzone, I want this guy in the scrum at the other end. Escobar also runs a great seam-route, and I can easily picture Russell Wilson putting the ball high, over the middle, where only Gavin (who high-points really well) can reach it. He’s got some huge paws too. Escobar had a decent year, hauling in 42 balls for 543 and 6 TD, but he’s only a junior, and I have yet to hear confirmation he’s declared.

Otten is a senior at San Jose State and, at the more lithe size of 6’6"/240, plays a bit more like the Joker/Big Slot combo that PC was trying to get out of Evan Moore (before that experiment went down in flames). Otten’s size doesn’t really allow him to be a mauling in-line blocker, but he isn’t really a liability there either thanks to strong effort. He definitely holds his own in the second level, blocking LB’s. Some sources have Otten as running in the 4.7’s, but I’ve seen him running routes from a wideout position and beating guys. Like a lot of long-limbed players, Otten may take longer to get to full-speed, but when he’s there his stride is ridiculous. I’d be curious what the last 10-yd split is on his 40-time. As a late 4th/early 5th-round pick, I think Otten possesses great value.

If the Hawks should happen to have even more patience than to draft a TE in the 5th, there are still sleepers to be found in the late rounds:

Clemson’s Brandon Ford had a great bowl game (9 catches vs. LSU) and a solid overall year (40 catches and 8 TD). Listed at 6’3"/235, if he has a decent 40, he could be that more prototypical Joker player. Clemson would sometimes use Ford out of the backfield like the H-back Danny discussed. He certainly has great hands!

There is also Tennessee’s Mychal Rivera. A 36-catch year with 15.6 YPC and 5 TD, from a 6’3"/244lb build. And I wouldn’t be mad at Rutgers’ DC Jefferson or South Carolina’s Justice Cunningham. Both of these two sound like the alter-egos of guys that fight crime in the nation’s capitol, but one is a former QB and the other is a manimal. Cunningham is the manimal, and he plays like a DE on offense. Jefferson is the ex-QB and he presents some interesting play-design possibilities. On an offense that has seen two wideouts complete passes this year, with a fullback that is a former QB, can you imagine adding in a TE that can throw?? Is Bevell salivating yet?

At some point in the last week or two, I saw a headline or a tweet that said this is a weak TE class. I can’t disagree with that more. It’s a position where even the elite players, routinely, aren’t taken until the 2nd round (Coby Fleener, Kyle Rudolph, Gronk), and where starting-caliber are frequently found on days two and three of the draft (Jimmy Graham-3rd, Jason Witten-3rd, Jermichael Finley-3rd, Aaron Hernandez-4th, Owen Daniels-4th, Dennis Pitta-4th, Brent Celek-5th, Brandon Myers-6th, Anthony McCoy-6th).

This year, tell me what round you want to take a TE, and I’ll tell you who to pick (1st-Ertz, 2nd-Kelce, 3rd-Escobar, 4th-Otten, 5th-Ford, 6th-Gragg, 7th-Cunningham). When a team finds its franchise quarterback, it has the only weapon it needs. The only thing the front office needs to do is to give our weapon some more ammo.