The 2013 East-West Shrine game takes place this afternoon 1:00PM (PST) and marks the second-biggest college postseason All-star game (behind the Senior Bowl) of the year. It’s a great place to scout players for days 2-3 of the draft, not to mention the occasional 1st-rounder (SF’s AJ Jenkins played there last year). Last year’s rosters also included the likes of Alfred Morris, Bobby Rainey, David Paulson, and the Seahawks’ own Rishaw Johnson.

This year’s rosters feel lighter at the top, but even deeper in the mid-to-late rounds, with the following players ones to watch as possible Hawk draft-picks/UDFA:

The linebacking corps is especially interesting, to me, this year, with Penn State’s Gerald Hodges leading the way. I’ve written of my affinity for Hodges a couple times, and it still remains…he’s a favorite of mine as a 3rd-round target, but I’d also like to point out Sio Moore, Keith Pough, and Devonte Holloman.

Sio Moore comes from UConn, and I was first drawn to him months ago by his measurables. Listed at 6’2” and between 229-240lbs, with some sources indicating he has 4.47 speed…he appeared to have a lot of what John Schneider likes in players. After noticing Moore’s ht/wt/40, I went to look for his film. That search came up empty, so I asked friends over at draftbreakdown.com if they could cut a clip on the guy. When the first clip (by @AaronAloysius…follow him) was posted, I was a little disappointed. Moore just seemed to play a large portion of the NC State game with a very laissez faire attitude. He just wasn’t hunting the ball carrier like I think LB’s should, and when he did get to the ball, Moore missed a lot of tackles.

From that point on, I didn’t really track the rest of Moore’s season. But, in hindsight, Moore put together some solid stats…finishing 2012 with 15.5 TFL, 7.5 sacks, and 11 PBU. Having studied a lot of defensive players, I know to find the combination of sacks with pass breakups is really rare. So I went back to watch some more tape of him. He’s still the same player. He’s not great at taking on blockers, he seems to shun hard contact, but he runs really well on blitzes and tracks TE’s well in coverage. Which explains the two stats he excels in. I really wanted to give Moore a rave review, but even on the second viewing he just doesn’t seem to be an every down player. But if there is any team that can find a way to utilize a guy with specialties like Moore, it might be Seattle.

Out of South Carolina, Devonte Holloman is interesting for a couple reasons: 1) he was once a safety for the Gamecocks, but over the last two years he bulked up and converted to a position known as the “spur” (perhaps short for “Spurrier”…as in Steve??), 2) he’s listed on the West squad’s roster as an ILB rather than an OLB, 3) in Shrine practices, Holloman has been reported as taking on a very strong, vocal leadership role amongst his peers. Devonte measures 6’1”/246 with decent, almost-33” arms.

The last LB I’m most-interested in watching is Howard University’s Keith Pough. Standing almost 6’2” and 241lbs, with 33.75” arms, Pough has great size. In a shortened, 9-game season, Pough had pretty moderate stats; finishing with 60 tackles, 8.5 TFL, 3.5 sacks, 1 PBU, and 1 FF. But the buzz on him coming from eye-witness accounts at Shrine practices has piqued my interest. Love the first viewing of these small-school guys that I haven’t seen footage on.

I talked about two of the other small-school guys to watch (Cooper Taylor and David Bass) earlier this week, and to that I’d add one more: Arkansas Pine-Bluff’s big OT Terron Armstead. I’ve been hearing about Armstead all year from scouts and draftniks. That effusiveness has amplified this week and today’s game will be my first extended viewing. Early reports are his footwork is pretty amazing. A possible 2nd-round pick, and any round later; a total steal. 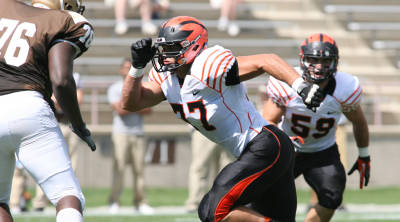 On the other side of the line, this class of Shrine Game DE/DT’s feels a bit weak. At DE, USC’s Wes Horton has some great length at 6’4”/261/34” arms, and Mike Catapano (6'3"/270) is getting some hype out of the Ivy League and Princeton. Horton managed 5.5 sacks playing second-fiddle to Morgan Breslin. Catapano had a pretty stout line of 43 tackles, 12 sacks, 5 PBU, and 3 FF…and Princeton only played 10 games.

At DT, William Campbell of Michigan has great size at 6’5”/318 (strikingly similar to another ex-Wolverine: Alan Branch), but he had absolutely no production all year. Then there is Mississippi State’s Josh Boyd, who is less of a measurables freak than Campbell, but with relatively better production. Both Boyd and Campbell fall far behind the group of DT’s (Sheldon Richardson, Jordan Hill, Kawann Short, Sylvester Williams, Sharrif Floyd) that are projecting to go in the first couple rounds (with the exception of Hill, who may be available a round or two later), but Boyd still interests me because when he is on, he can do this:

After LB, perhaps my favorite position group (for quantity and quality), is the DB group. Specifically, the West Team DB’s. Including late round CB’s like Micah Hyde, Khalid Wooten, Nigel Malone, and safeties Shamarko Thomas and Duke Williams, the West could be a great place to find a nice 6th round pick for the Hawks. Shamarko measured in a little smaller than I had hoped (under 5’9”), but his max-effort attitude and ability to overcome great personal tragedy are the hallmarks of future success (I’d look at him as early as a 4th). Wooten is a recent discovery, but one I’m very interested in learning more on. Hyde and Williams seem really solid depth picks. The East is less stacked in the defensive backfield, but CB Brandon McGee and S Rashard Hall have both been on my radar this year.

I haven’t mentioned any WR’s or TE’s…this is partly because I’m not that interested in many of those players at this game, but, more importantly, I’m not sure either East or West roster has the type of QB’s that will distribute the ball to receivers well/often. So it will be tough to evaluate the WR/TE this game. Of both squads, I’d have to say East TE DC Jefferson is the pass-catcher I’m most interested in seeing. 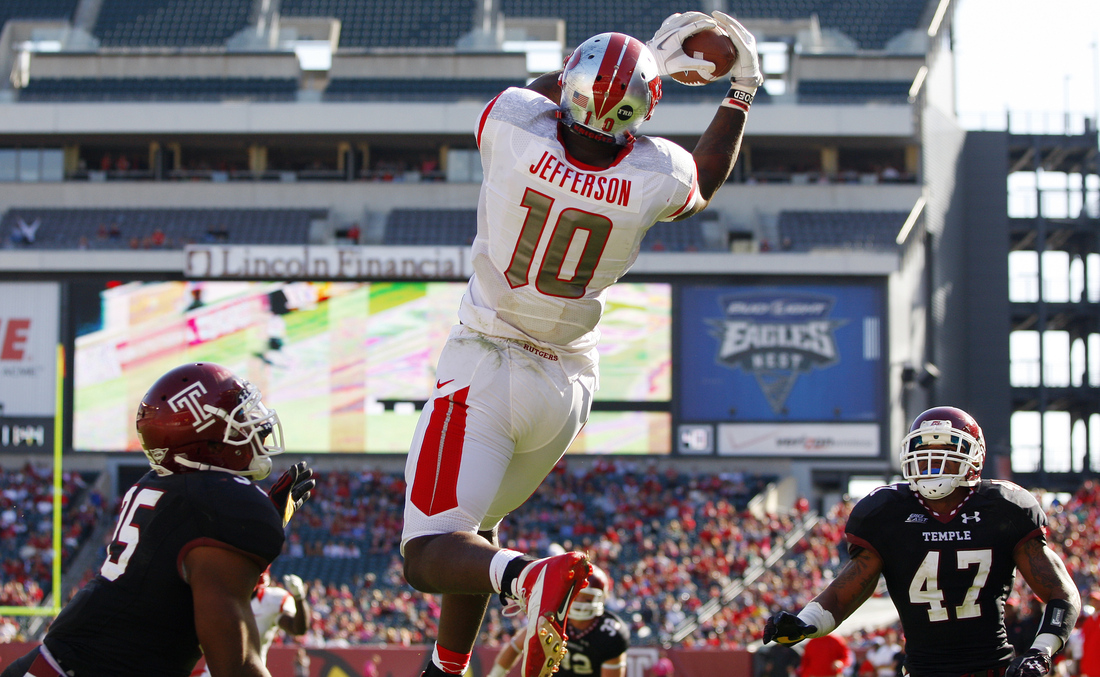 Although the Hawks probably don’t need a new kicker, Hauschka did end the season hurt and is now a free agent, so it’s worth noting that both of last year’s Shrine Game kickers (Blair Walsh and Greg Zuerlein) had excellent rookie seasons. Florida’s kicker Caleb Sturgis would be the one to watch this year.

We’ll close out with a position group the Hawks could look to late in the draft as a luxury-pick: RB. This is where we find a plethora of mini-mights with names like Kerwynn Williams, Zac Stacy, Ray Graham, and Montel Harris. All of them checking in at under 5’9”, with Kerwynn as my favorite and Zac Stacy with perhaps the best chance to become an every-down back in the NFL. He’s got some between-the-tackles power and a build similar to Ray Rice. A fun group to watch, and often the most used group due to a short week for QB’s and WR’s to find timing/chemistry.