The players in the 2013 Draft that fulfill John Schneider and Pete Carroll’s fetish for “players of unusual length”.

Share All sharing options for: Chicks Dig the Long Ballers

It’s been very openly documented that John Schneider and Pete Carroll love players with great length (JS has previously said his favorite "value" pick from last year’s draft was Greg Scruggs, whose single greatest attribute are his near 36" arms). When we talk "length" we aren’t necessarily talking about height, although the two are often found together (Jason Jones, Russell Okung). But there are times shorter guys still have relatively long arms and wingspans (Russell Wilson, Doug Baldwin). 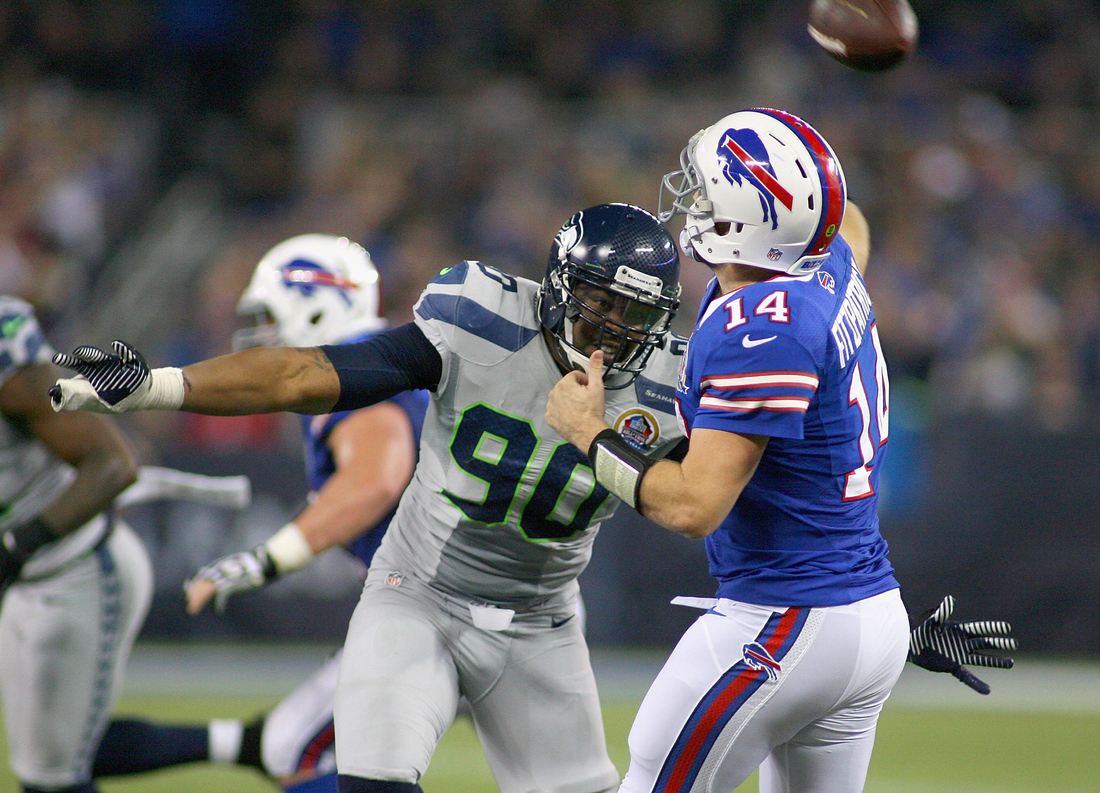 "I love sacking QB's THIS much!" - Photo by Rick Stewart

This is just a quick examination of some of the players that have already had some of their measurables officially documented at postseason all-star games, and that are the longest at their respective positions. This list is not comprehensive, as it does not hold many of the underclassmen that will be in the combine/draft (all measurements are recorded to the nearest eighth of an inch):

So far the longest arms I’ve seen recorded at all positions are Alabama OT DJ Fluker's with 36 3/8" arms. Also topping 36" was Ladrian Waddle, an OT from Texas Tech. Guards are almost always shorter-armed than Tackles, and this years’ top two are UNC’s Travis Bond (34 6/8") and David Quessenberry (a likely tackle-to-guard convert…33 7/8"). It’s worth noting that backup Seahawk guard Rishaw Johnson was measured at last year’s combine with 35 2/8" arms. I didn’t note any unusually long Centers.

On the D side of the LOS…Defensive Ends, like OT’s, are the longest on the defense, with DT’s being closer related to the guards. My boy, Purdue DT Kawann Short has some great length at 33 6/8" arms, but he was bested by Oklahoma’s Stacy McGee who measured at 34 1/8".

At the Ends, there are some monsters this year: I previously talked about Clemson’s Malliciah Goodman’s arms before they were officially measured, and the official measurement didn’t disappoint: 35 7/8"!! That number seems even more bananas when you take his height (6’4") and compare it to the length of the taller (6’7") South Carolina DE Devin Taylor, whose arms were still 35 6/8".

I’ll point out one more DE who I’m high on (which is a bad choice of words regarding a guy who was busted for selling weed) who has great length: East Central Oklahoma’s Armonty Bryant, who has 35 4/8" arms. For some reason, I’m not letting Bryant’s arrest dissuade me from wanting to draft him. His tape helps explain why:

Moving back towards the linebackers, the measurements get smaller and the "elite" will be more in the high-33" range. The two longest this year are UConn’s Sio Moore and Howard’s Keith Pough, whom both measured in at 33 6/8" arms.

As logic would suggest, we take another step away from the LOS and the top safeties are rarely breaking 33". Although he didn’t break the 33" mark, I’ll first point out Nevada’s Duke Williams…he stands only 5’11" but his arms were measured at 31 6/8". Kansas has one of the longest in Bradley Mcdougald (33" even), and for the other we bounce back to Clemson where Rashard Hall has also been measured at 33" even. I don’t know if Clemson HC Dabo Swinney has read the PCJS handbook, but he’s really recruited a lot of players I think the Hawks must be looking at drafting. Here’s some Hall:

On the corners, this draft class is pretty devoid of Brandon Browner/Richard Sherman type length. David Amerson is pretty long but may move to safety. Blidi Wreh-Wilson is tall but not that long. So the two longest CB’s measured so far both end up coming from the same secondary: UCLA’s twin 6’1", 32 7/8" corners Sheldon Price and Aaron Hester. Price’s film, in particular, actually really reminds me of BB.

Back to the offense and some skill positions…I’m a little disappointed I haven’t found more length at TE. But keep in mind many of the higher-projected TE’s haven’t been measured yet. For now, the two best are New Mexico’s Lucas Reed (35 2/8") and Rice’s Vance McDonald (34 4/8"). At WR, the two longest I’ve seen so far are VT’s Marcus Davis (33 6/8") and FSU’s Rodney Smith (34 3/8"). If Seattle is looking for that big-slot WR available in a late-round pick, Davis and Smith should both be on the board after the 5th.

I don’t know that the Hawks look for length at RB, but there was one guy I found who was unusually long for a running back: Central Florida’s Latavius Murray seems to be a WR playing in the backfield…he measures 6’3" with 33 2/8" arms. And I’ll throw in one QB for fun: FSU’s EJ Manuel has some FREAKISH arms! By far the longest QB I’ve seen at 35".

Length isn’t the only measurable the Hawks’ FO has shown a predilection toward, but until we start getting 40’s and short shuttles, it’s one of the only ones we can isolate so far. And I wouldn’t be surprised if one or two of the names I’ve just talked about become Hawks primarily for their unusual size. I love Kawann in the 1st, I could see Malliciah or Armonty in the 3rd, and I wouldn't be mad at Rashard in like the 6th.

Now off to the Fire Swamp…I’ve got an idea for a new pet for John Schneider!