Continuing on with the Field Gulls Writers' Mock Draft for the 2013 NFL Draft, here follows the last seven picks of the first round, #26 through #32. In case you missed them last week, make sure to check out the post highlighting picks #1 through #24, followed by the post highlighting the players that we writers identified as our picks for Seattle (You readers voted for selection at #25, and the choice was UNC G Jonathan Cooper).

Now, we're in NFL Combine Week, and ranks and ratings and buzz will surely change on some of these first-round players, media perception and possibly NFL Scouts and front office wise, but nonetheless, we forge on with these selections. Here's how we picked for the last seven teams of the first round, and later this week, we'll be publishing our picks for Round Two.

When your O-Line gives up 8 sacks in a game as the Packers did against Seattle, you know you are in trouble. Green Bay's offensive line unit was hampered this year by injuries, lack of depth and pure suckage. A aging Jeff Saturday? Marshall Newhouse? TJ Lang? Blah. I know that their LT Derrek Sherrod has been injured and RT Bryan Bulaga may return to form, but Jones provides a lot of insurance here and may very be a starter from day one, due to his versatility.

Of course, there are more glaring holes in the Packers defense and lack of depth at other offensive positions that warrant another pick and anybody from Johnthan Banks/Desmond Trufant, Eddie Lacy, Dion Jordan or even DeAngre Hopinks would've made sense. If I were Ted Thompson, I would immediately trade down here. In the case that he can't, he would go BPA - which is, in my opinion, Jones.

In the ten storied years of the Houston Texans, they've picked offense in the 1st round only three times. The only offensive contributors worth mentioning since they took tackle Duane Brown in the 1st round of 2008 are rotational backs Steve Slaton and Ben Tate. We won't carry the trend for a 6th year in our imaginary world, here.

Gary Kubiak's decidedly Holmgrenian offense took a Holmgrenian path to maturity, and similarly succeeds by system more than talent, standout receiver Andre Johnson excepting. Defense has been well-stocked and is functioning at a high level, as young defenses are wont to do. Still, the NFC is the offensive conference looking forward, so the Texans are well-positioned to succeed if they can extend the longevity of the late-built system offense. It's scary to realize that JJ Watt, the true MVP of the league in 2012, is only 23.

In retrospect, I find James Carpenter a superior prospect to DJ Fluker, largely on account of footwork and quickness of feet, although retaining balance may come more naturally to Fluker. Still, I think back to Carpenter getting picked at 25, to Nick Saban's puzzled ""James Carpenter in the first round..."" and can't help but wonder if Fluker is somehow a bamboozle of a prospect. Carp's outlook for guard is quite promising, but he failed at tackle, and he looked better to me than Fluker. Saban coaches them so well, it's kind of hard to imagine upside.

But where Carp's trunk and footwork looked better, Fluker has the arms of the class, it appears, and combining that with Fluker's run-blocking power and Kubiak's PA ZBS, addressing tackle early is a great way to extend the longevity of this mature offense. That was two arm-length puns, both intended, if you didn't catch on.

Keith Brooking was the Broncos' starting MLB this last year, and he was all right. But at 37 years old, the 15-year veteran's best days are behind him. Denver have a lot of talent in their front seven. Wesley Woodyard and Von Miller are among the league's best at WLB and SLB, respectively. If they can nail down a young MLB, the core of their defense will be set for years. Minter can be that guy. He's a cerebral, fundamental player.

He wasn't the fastest, quickest, or strongest guy on the LSU defense (hardly a damning assertion), but he stepped up his game on the big stage, and had a knack for making the game-breaking play. He can inject more youth into an already top-notch defense and ensure that they continue to perform at a high level.

New England could go a couple of ways here: DT, WR, or CB. They've already (somewhat) addressed DT by signing Armond Armstead. Nuk Hopkins would make a lot of sense here, but I think there is depth at WR in the 2nd round. Instead, they will go CB.

The Patriots have had an abysmal secondary for some time now. Devin McCourty has been moved to Safety, Aqib Talib was mildly successful but has now become a FA. Banks would be an instant starter, bringing great length, technique, and instinct to the position. The added versatility in the return game is a plus. Desmond Trufant would be the next best CB available.

The Falcons want a power runner to compliment their vertical passing attack and open up play-action. Michael Turner is 31 and didn't have a great 2012 season. Jacquizz Rodgers does some nice things and has some power, but he's best used as a change of pace back. Eddie Lacy would instantly revitalize the Falcons' ground game and exactly in the manner they crave from their lead back - running people over.

Given how this mock draft has gone, the 49ers are in an enviable position. They have very few obvious holes on the roster, were a few plays away from a Super Bowl title, and should be in contention for many years to come. Dion Jordan is the most talented player left on the board, and it's unfathomable that he could fall this far, but hey, it's February, we're all spitballing at this point.

I wanted to pick him here, but try as I might, I just couldn't find a fit for him on the 3-4 defense. Justin Smith's age is a concern, but this is still the best front seven in football, under cheap contracts for years, and I don't see Jordan fitting the role Smith does. So I'm going to upgrade the secondary, the one unit that got exposed in the playoffs.

I bet the organization would love to wash their hands of Chris Culliver after his disastorous postseason, both on-and-off-the field. The safety postion is a concern, but for now I'm going with the best CB left on the board. Trufant had an accomplished career at Washington, one of the few bright spots in a unit ranked among the worst in the nation during his time. He has the speed and ball skills to match up with any receiver in the NFL. The size and physicalitiy may not be there yet, but if Desmond carries the same genes as his older brother Marcus, the 49ers can count on a solid cover corner for many years to come.

Baltimore always look for value and if this scenario presented itself they're unlikely to pass on prospective top-15 pick Dion Jordan. He didn't have great production during his time at Oregon, but it's a bit of a red herring. Without doubt he's one of the more intriguing players in this class.

Sensational athleticism for his size, great lean and balance off the edge. He can drop into coverage which will interest 3-4 teams like the Ravens. It's unlikely he falls this far but if he does it could be due to weight concerns -- there was some speculation he played at around 230lbs in 2012. He needs to prove he can keep weight on a 6-7 frame to combat the physical demands of the league.

Baltimore could lose Paul Kruger in free agency so a guy like Jordan would make a lot of sense. I suppose the other option is Manti Te'o given that they'll have a hole at MLB. Kevin Minter would've also been a nice option but he left the board at #28. In this scenario though there's no way they could pass on Jordan and he's the final pick of round one.

So, there you have it. Round one of the Field Gulls Writers' Mock is in the books, and here's a quick summary of the picks: 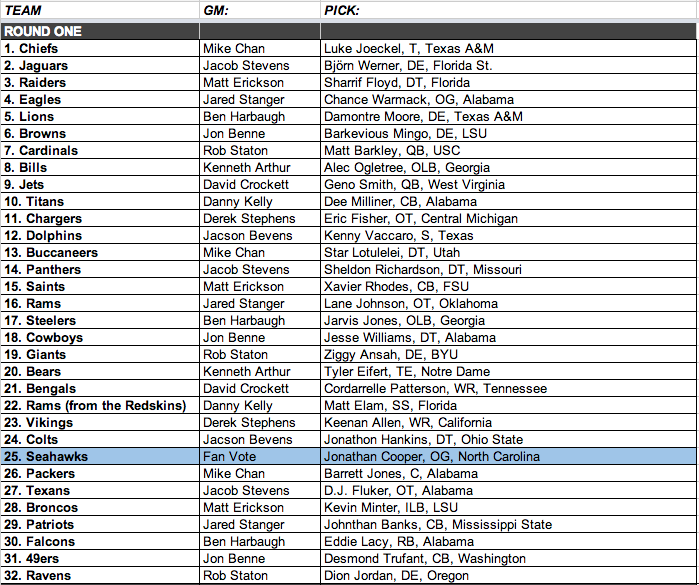