There's no multiplying in football

The new math that may help discover the next Russell Okung.

Share All sharing options for: There's no multiplying in football

At some point Friday afternoon, as this year’s group(s) of NFL Draft Combine O-Linemen were being tested in the bench-press, I made a comment on twitter about the guys with the longest arms often having greater trouble in the bench-press. This is simple physics; as the long-limbed participants are pushing the bar-bell a longer distance than those of average arm-size. But then @DavisHsuSeattle reminded me that Seahawk Russell Okung, when he tested at the combine three years ago, had both a ridiculous 36” reach AND benched 225 lbs an insane 38 times!

Okung is now a pro-bowl player and Davis’ comment led me to wonder if there is a direct correlation between strength/length ratio and probability for future success in the league. I set out to determine a statistic (and its requisite formula) that could singularize a player’s length and his strength into one number…like an actual scientific way of determining “pound-for-pound” the best O-lineman in this year’s combine. 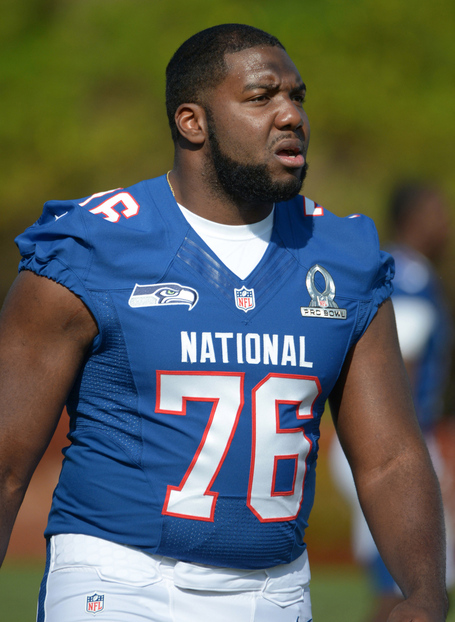 At first I simply plugged all of this year’s O-linemen (tackles, guards, and centers) into a spreadsheet with their respective length and bench numbers. I also listed Okung’s numbers from 2010 to establish a high-water mark (*Okung’s 38 reps is one of the top 6 results for an OL in the last seven years), and then I added in the numbers for Jake Long, Joe Staley, William Beatty, and Ryan Clady as higher-end representatives of successful NFL linemen. Then it was a matter of finding the right math.

My first thought: a simple ratio bench reps/arm length. That didn’t work because guys with short arms (32”) can have high bench totals (see: Eric Herman this year; 32.28”arms and 35 reps), leaving the short-armed as the leaders.

Next thought: add the (#reps/reach) to the original length. This gave almost the exact opposite result; giving all favor to guys who simply began the test with the longest arms (DJ Fluker/Rogers Gaines). I needed a way to focus on guys with great length, but then give them a pretty significant bonus for a high bench total.

Third attempt: take the arm length and add a dividend of the reps. I initially tried reps/3 but didn’t like that result…then I did reps/4 and that seemed too big of a swing the other way. So I settled on: arm length + (reps/3.5), and it seemed best. This method finally matched the eye-test high-water man (Okung) to the mathematical high-water man (Okung). This math also resulted in Jake Long coming in 2nd and Ryan Clady coming in 4th amongst our rookies…so the established, Pro-Bowl players are now on the top of the list, and the math feels reliable (incidentally; Beatty=17th, Staley=21st out of 45 tested). So whom did the chosen math favor from the 2013 class?? Rogers Gaines.

Hailing from Tennessee State University, Rogers Gaines is a monster of a man; measuring 6’6”/334lbs with 36 ¼” arms, and a bench total of 28 reps. For comparison: the other biggest dude in Indy, DJ Fluker (6’5”/339/36 3/4”arms), managed only 21 bench reps and fell to 8th of the ’13 class in my little experiment. Not much was known about Gaines (by draftniks and me) coming into the combine, and so these kind of results will send us scrambling for game-tape to see if there is more there than meets-the-eye.

In fact, the top three scorers in my test will all require further research in the coming weeks before the draft. Following behind Rogers Gaines were Youngstown U’s Lamar Mady and Azusa Pacific’s 6’8”/315 bigun Luke Marquardt. I’ve watched tape on none of the three prior to this, but will have to now.

As we work our way down the list, we begin to find more recognizable names at #4; Oklahoma’s Lane Johnson. Prior to this, many had expected Johnson to be long and fast, but to lack elite strength. Coming into the combine as a projected 1st-rounder, Johnson may have moved up into the top 10 picks by surprising many with his bench total of 28 reps (besting Eric Fisher and Luke Joeckel by 1 rep). 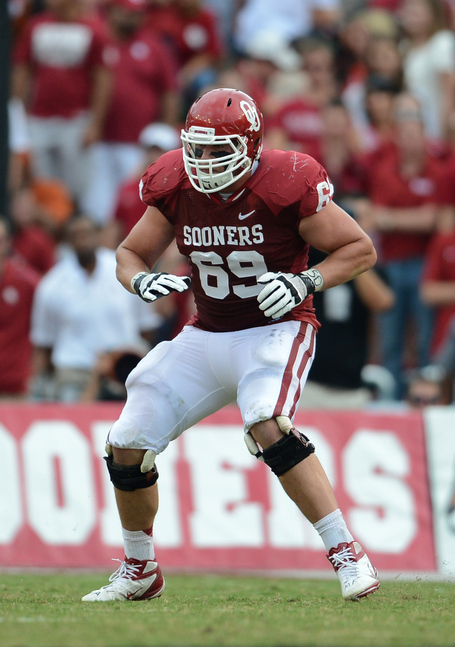 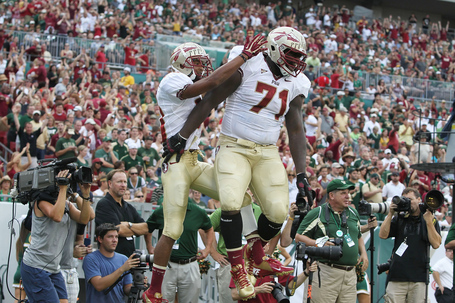 Of course, all of this math will go for naught when the OL's take the field Saturday and actually add some running and jumping to the pushing and shoving. Then I'll just have to add 5.15, divide by pi, carry the 1, times lightspeed, to the 12th power = Win Forever!