After all the measurables have been taken, we look for the one quality in draft prospects that is immeasurable.

So now we have all this data and a myriad ways to interpret it. But all of that data is incomplete. We don’t have one major evaluation tool. We don’t have the interviews. I guarantee there is something huge learned in those combine/senior bowl/pro-day closed-door meetings that ranks as high, if not higher, than anything the public sees on the field.

For as open and revealing as Pete Carroll and John Schneider have been (which isn’t very open), we have been able to glean a few things about how they evaluate talent on the field: they like speed, they like length, they like that big ol’ chip on the shoulder. But after three years of PC/JS drafts, I think I can safely speculate that there is one more thing that they are quietly, but consistently, looking to add to this roster: they are looking for guys that TILT THE ROOM.

Most of us, by now, have heard the expression. It was coined (or at least popularized, as far as I know) by John Schneider. It was first used to describe a quality he was looking for in a quarterback. It’s a presence, it’s a vibe, it’s a charisma, it’s an in impossible-to-articulate feeling that one has when someone enters a room and changes the molecular composition of the air within it. I think, in hindsight, we can safely say JS found this quality in Russell Wilson. But as long as we’re looking back…don’t you think the two Hawk leaders have found guys that tilt rooms at many positions?

As there are room-tilters at multiple positions, I think there might by multiple “types” of guys that tilt rooms. In my time in the music industry I’ve had the opportunity to meet a lot of truly dynamic and charismatic personalities (rockstars basically), who had noticeable and undeniable effect on the rooms they were in, and they become great analogies for the types I’m seeing in the Hawk locker room.

There is the guy who tilts a room with the presence of present. These are guys that are IN the moment of EVERY moment. It’s a very cerebral, thoughtful presence…almost presidential. In a weird way, this type will only tilt a room one person at a time, because, whether or not the room has hundreds of people in it, or simply two, the "presence tilters" make each person in the room feel like they are the ONLY one in the room. In music, this type would be Brandon Boyd, lead singer of Incubus. Talking with Boyd, you get the feeling he’s engaged and invested in what you’re saying, even though it may only be a fleeting, two-minute conversation. On the Hawks, one of this type is Russell Wilson. He has no time to sleep because he is compelled to win everyone over, even if he has to do it one person-to-person interaction at a time. 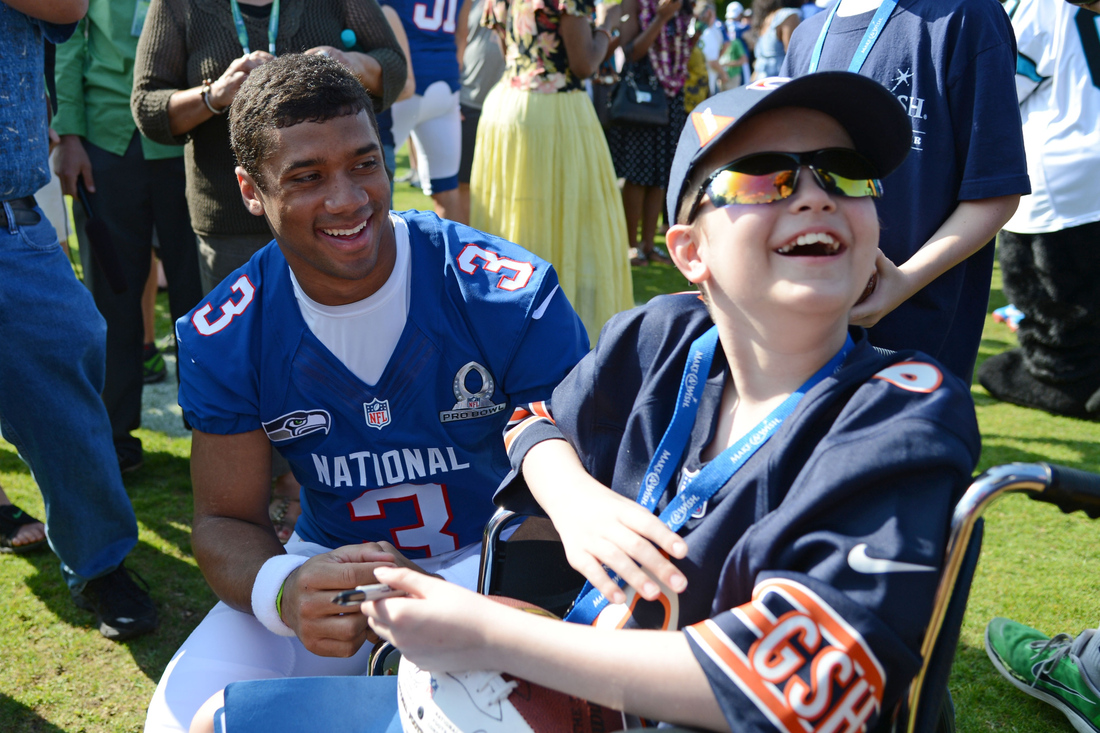 The second type are the guys that tilt a room by intimidating every other person in it, simply by appearing. This doesn’t have to be a loud intimidation. It can be concentrated confidence with a silencer on the barrel. Will the guy snap at your first wrong move? Don’t know…but not worth finding out. The intimidator is, of course, often aided by obvious physical prowess.

In music, it has to be Henry Rollins. I sat in on an interview with Henry Rollins once, and I’m sure the guy has a fine sense of humor, but he had left it in his gym bag or something, and it was just one of the most tension-frought moments I can ever remember. On the Hawks, one of the obvious "intimidation tilters" is Brandon Browner. Browner is all business, and business is BOOM-ing. 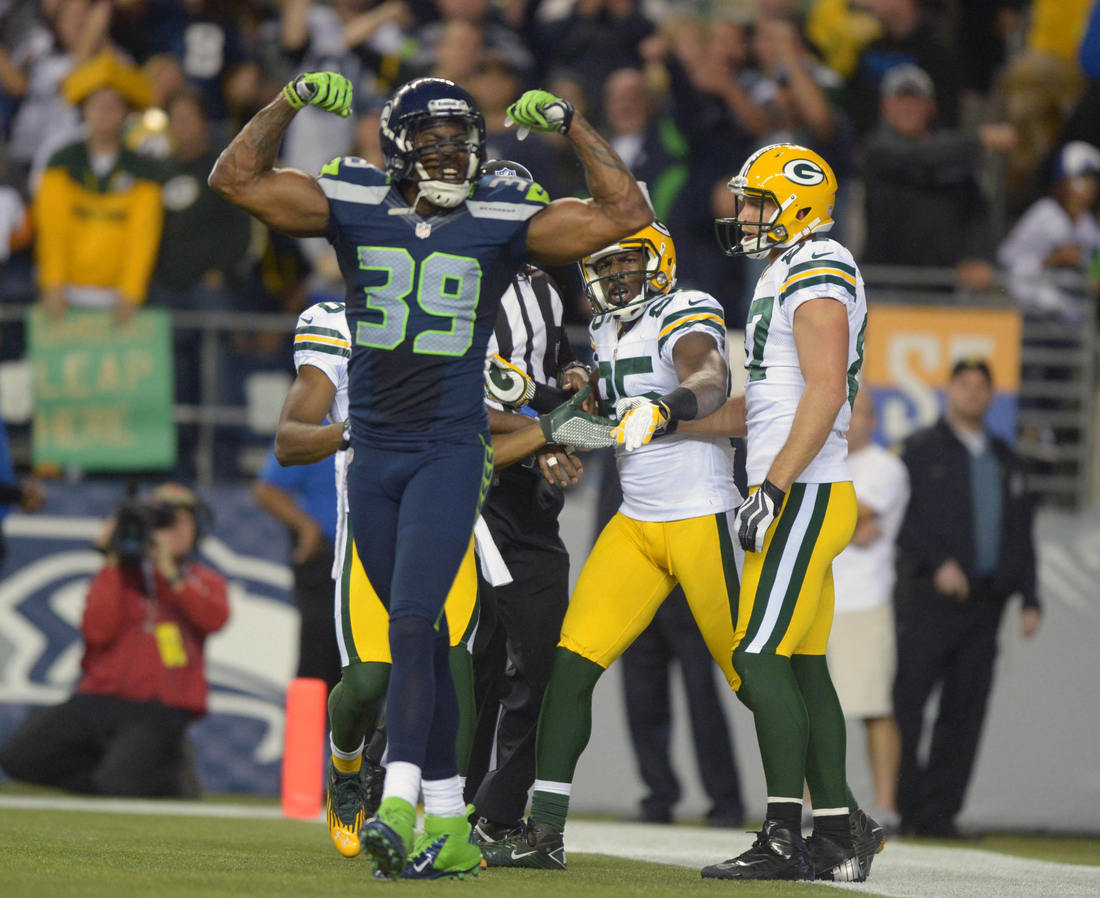 The third type is the guy that tilts a room with humor. When you hear a group of people just erupting into laughter every 30 seconds, and you walk over to investigate it, at the center of the group is the comedy tilter. It can be schtick, it can be unintentional, it can be silliness, or it can be just the damn most earnest-hearted person who just stumbles into a funny way of looking at or saying things.

In music, there are many, but one who never ventured far off the absurdist path is Green Day drummer, Tre Cool. You can’t be in a room with Tre Cool and not know he’s in it, mostly because he’s climbing to the highest point of the room, only to take a pratfall off of it, all for our amusement. On the Hawks, this is best shown by John Moffitt. You already know you want to go out drinking with Moff, and you know already that your abs are gonna hurt the next day from laughing too much. 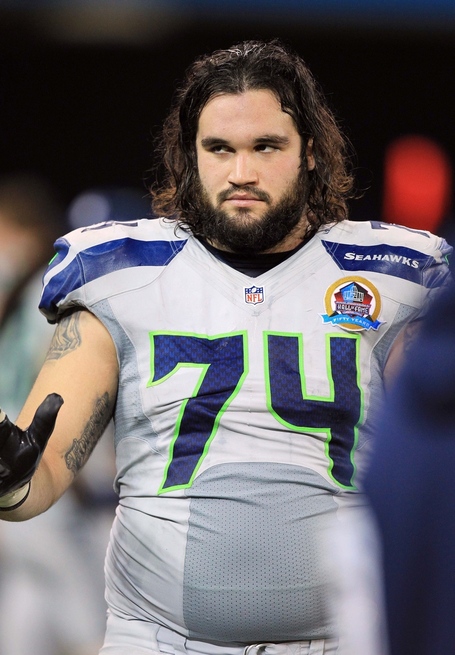 Lastly, and most interestingly, there are the guys that tilt a room with stillness. This type is not actively earning our attention. There is no flash, there is no volume, there is no effort. In fact, this type probably wishes he weren’t even in a room, but those who are actually fortunate enough to be in it intuitively know that that still water is running some kind of deep.

In music, I would say Maynard James Keenan is pretty damn compelling without saying much. I’d also venture to say, although I haven’t seen it firsthand, the late Ronnie Van Zant of Lynyrd Skynyrd had that same quiet charisma. On the Hawks, I think there is something so fascinating about our quiet Beast. What thoughts are in there, that he hides behind his self-imposed silence? We may never find out, but I think when Marshawn is in the room, we’re all collectively wishing to know. 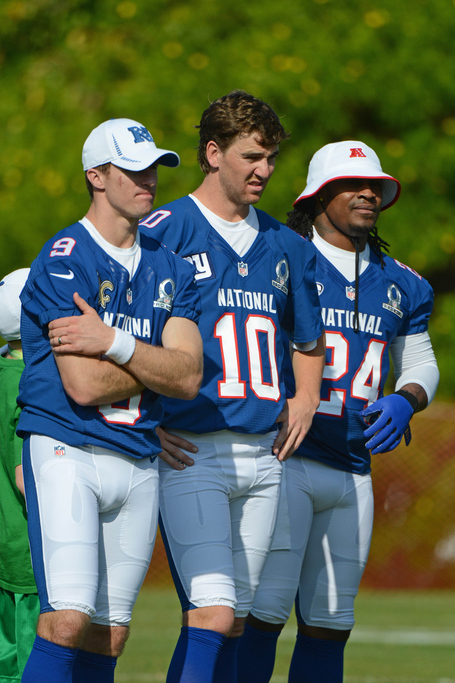 Those are the four basic food groups of room-tilt. Actually, they’re less the four food groups, and more the four elements; earth, wind, fire, and ice. Can you match up which is which? And, of course, many people/players will have various combinations of the four. Sherm has some intimidator, some comedy, and probably, when the cameras stop rolling, a fair amount of quiet presence. Whatever the mix, you know Sherm’s putting his opponents on tilt and deserves the recognition.

Now, assuming my theory is correct, how do we apply this going forward? Even knowing what to look for, do we recognize it when we see it? Can we be taught how to recognize it? I don’t know. I like to think that I recognize it. I like to think some of my favorite players in this year’s draft will tilt. See if you can diagnose and/or categorize these with any of the types of tilt:

Those are all guys, without even watching game tape or knowing any measurables, that I would be compelled to want to know more about. It's a nod of the head and a wink of the eye. It's playful, it's vengeful, it's sincere, it's mysterious. But it's all "IT". That it factor that is found in those destined for greatness. And I think that there is something important about the intuition of finding it. Clearly this is not science. But, then again, neither is judging players based on measurables. It’s really more of an art form… no one concrete formula, not always repeatable, and always open to interpretation. Not even always right.

We take bits and pieces of the things we can measure; bucket after bucket of sediment and dirt…then pour across them the pure but immeasurable water of true self…overturn every stone and filter through all the silt, to reveal the invaluable golden nuggets of tilt. And when you can tilt at every position, from 1st through 53rd, the tilt is not of the room, we’re gonna tilt the world. (Copyright @JaredStanger 2013)