Stewards of the New School

One of the most electrifying prospect videos of the year, at a position of need for the Hawks.

Share All sharing options for: Stewards of the New School

I really hope you’re practicing a bit of discretion when it comes to who you read and believe in regard to draft blogging. After spending the last couple years really delving into the draft personally, I think that a lot of draftniks are writing about scouting (rather than actually being a scout) for a reason. It’s like that old expression, "those who can – do, those who can’t – blog about it." They either simply have an amateur eye and undeveloped evaluation skills or, even worse, they are repackaging/regurgitating info they’ve read elsewhere (generally written by someone with the former problem). So we end up with a lot of copies of copies of the wrong answers to the test…it’s the 21st century version of the telephone game.

This is part of the reason I try not to read too many other draft bloggers, and why I like doing pieces (like my "7 is the new 5" story) which are entirely based on players that NO ONE is talking about. I like to be first. I don’t want my evals to be tainted (for better or worse) by others’ opinions. I like to go through college stat sheets and measurables, parse out the names that have intriguing attributes, and then study their film. It’s the Pepsi challenge. Sometimes this is a slower process than others.

For months now, I have had my defensive production formula spreadsheet. The guy that has been at the top of it all season, for single highest overall score for all defensive positions, is Houston LB Phillip Steward. 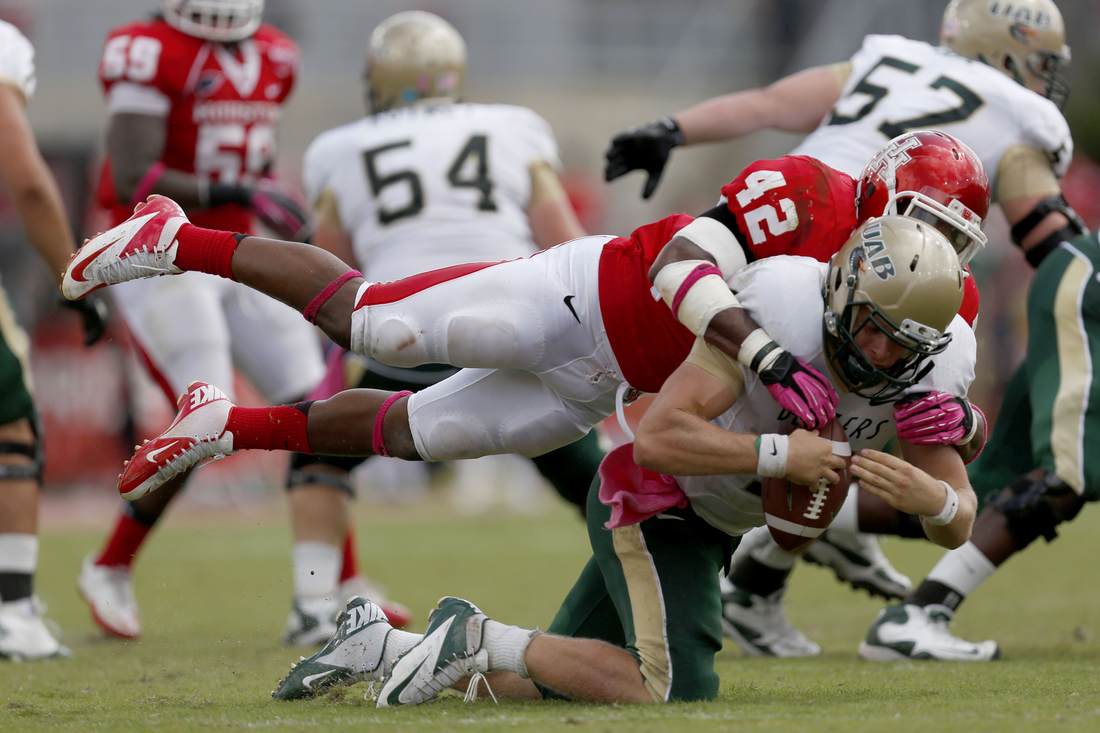 As a general rule, the LB group scores highest of all positions, so Steward outpacing guys like Sheldon Richardson, Jadeveon Clowney, and Logan Ryan (some of the leaders in their respective positions) comes as no surprise. To know that Steward bested them by 40-50 pts, and topped all LB (including Jarvis Jones and Khaseem Greene) by 10-20 pts, was intriguing to say the least. How did he do it?

Then I look at his measurables. Steward recently took part in both the Texas vs Nation all-star game and was also a late-invite to the Senior Bowl. At the latter game, Steward was measured an eighth of an inch under 6’0" (but we’ll round up) and 232 lbs. Okay…he’s a bit small, but still manages 32" arms (above average length at LB). Recent draft comps: Bobby Wagner is 6’0’/241 at the MIKE spot, Eagles draftpick Mychal Kendricks is 5’11"/240, and Malcolm Smith (who is the best comparison, and projected competition, for Steward at the Hawks’ WILL) was measured at 6’0"/225 at his USC pro-day. I think I can deal with Steward’s size. How is his game film?

This is when the process stalled. With my limited resources and dependence on places like DraftBreakdown.com, I couldn’t get my eyes on Steward in action. That finally changed Friday when one of the DraftBreakdown homies (@AaronAloysius…seriously, follow him) posted a cut of Steward in early-season action versus UCLA. HOLY SHIT!! Oh sorry… "earmuffs". Now I can say it…HOLY SHIT!!! The sea parts, the clouds break, the sun rains down and the Tabernacle Choir sings the "Hallelujah Chorus". THIS DUDE IS THE TRUTH! Just watch it:

Halfway through the clip I was messaging Danny Kelly, telling him he needed to check this tape out. Let’s break it down from the start:

1) Nice coverage on running back coming out of the backfield.

2) Solid tackle on running back straight up the middle.

3) What’s this? Lining up in the slot over the TE…nope, a blitz. Timed it perfectly and crushes the RB in the backfield for a loss. CB

4) Four-wide…Steward over the TE again (Fauria, btw), outside the hash. Steward sheds the block and blows up the screen-pass. CB

5) Love the eyes on this one. Moving laterally with his eyes on the ball the whole time.

6) Good patience on the option play…chases down a pretty studly RB in Johnathan Franklin.

9) Chooses a great route to the RB.

10) Good speed on the LB blitz…gets his hands up…may have deflected ball.

11) Same as 10, only completely blocks the pass. Almost catches his own tip.

13) Similar play to #10/11…QB Hundley remembers getting pass blocked by Steward, and this time holds on to the ball and gets sacked by Houston. Assist to Steward.

14) Steward lines up as slot CB over WR this time…checks him in the 5-yard window and completely disrupts route.

I won’t break down the whole tape. You get the idea. Steward lines up as a nickelback in about 40% of plays in this tape. He blitzes maybe 25% of the snaps. He makes the tackle on 13 plays, sacks the QB once, blocks one pass, and recovers one fumble (backwards pass). And he does it all with velocity, tenacity, and selectivity. Throw out almost any scouting cliché and Steward’s doing it: sheds blockers, wraps up on tackles, electric on blitzes, drops well in coverage, ice-picking (actually I just threw in "ice-picking" to seem like I’m in-the-know)…add in some of PC/JS own brand of scouting tendencies: the length, the competitiveness, the scheme versatility. It is one of the sickest and most complete tapes I’ve seen all year!

What is an acceptable response to this tape? Shouting? Drooling? Erection? I can’t say that any of those happened, but the mental and emotional excitement was significant. This could be a guy that revolutionizes the LB position, combining a WILL and a Nickel CB into one every-down player?! Yes, please! 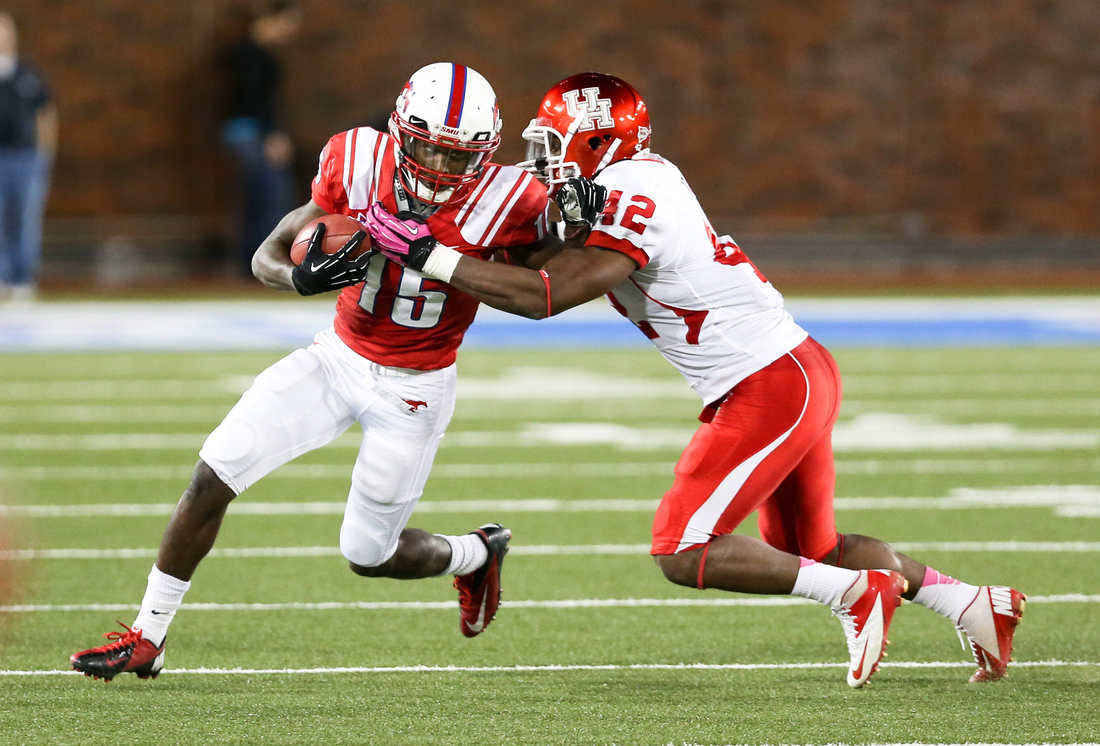 Then, after the excitement of the tape itself, after sharing the link to the tape with Danny and Matt Erickson and a couple other 12’s, and after some quick research as to where Steward is being projected in the draft, I came away with the strangest sense of conflicted emotions: relief and disappointment.

NFLDraftScout.com has Steward at #39 in their rankings of OLB and #474 of overall prospects (aka undrafted). Draftsite.com doesn’t have him listed. Drafttek.com doesn’t have him listed. Outside of the occasional mention for his participation in the postseason all-star games, I have heard NOTHING on Phillip Steward all year. (Full disclosure: Danny did point out that Matt Waldman wrote a piece on Steward just three days ago. Damn! I hate being scooped! ;) I looked for his piece and skimmed over bits of it…very well done, but I didn’t want it to influence my report, so I didn’t finish it. I liked his suggestion that Steward could be the future of the WLB position…a LB/CB hybrid. Waldman’s name has come up a few times, from people I respect, and he seems to be a voice worth listening to.) What does Steward’s lack of publicity mean?

It means that Steward is Rip Van Winkle DELUXE. An UDFA sleeper that the Hawks can snatch in the 4th round. Also though, to me, it means that a lot of these so-called draft experts are making a mockery of the mock-draft. Either consciously or unconsciously, through ignorance, inability, or laziness (maybe also a little bit of trusting sources that are intentionally feeding them misinformation), they are just muddying the field that is the NFL futures stock market. And if they’re not writing/focusing on amazing, "right" players, deductive reasoning suggests they are wasting their time (and yours) writing about the wrong players. (I do have a sneaking suspicion, though, that after this week, they’ll be writing about Phillip Steward in the months leading up to the draft much more.)

If I’ve learned anything this year, from last year’s draft, through the 2012 season, the postseason, the annual awards, and the beginnings of this off/draft season, it is all a collective confirmation that it takes talent to recognize talent. All of the people that scoffed at the Seahawks' 2012 draft immediately following its completion, who later retracted and conceded it was one of the best drafts in the league…all of the people that thought it was crazy to start Russell Wilson over Matt Flynn…all of the people that voted for Kuechly/RG3/Ryan Grigson for their awards rather than Wagz/RW/JS…all of those people made those errors in judgment because they are not as talented as the one who is engineering it all before our very eyes: John Schneider. Quite possibly the most talented man in the room…and a true steward of the new school.

In fact, more than a steward, JS is a leader of the new school. Watch, at the combine all the juice from the mind...Heels up, wheels up, show the way to the blind. Powerful impact BOOM! from the legion...Not braggin, but chillin just like the Norwegian. RRRRRROAW RRRRRRROAW like a dungeon dragon...All the draft bloggers wanting on the bandwagon. Say it to them twice so they hear it in stereo...Seahawks on the clock and that's the scenario.

Now let's watch that shit again! Oops...earmuffs! I just get too excited about future Seahawks!