Continuing to look at the combine performers that bare strong resemblance to current Seahawks.

Continuing our look at the draft prospects from the combine that have measured up similarly to current (and some recently "past") Seahawks. Today I’m looking at the big guys…Oline and Dline.

Schofield has good length with his 34" arms, one of the top 10 fastest forty times of OL this year, and a nice draft value with a 5th round projection. Here he is playing Ohio State:

Anybody else surprised that McQuistan ran that fast in his day?? Paul has nearly identical measurements as Ohio State’s Jack Mewhort (6060/309), but Mewhort ran much slower (5.37).

Oh yeah…and Mewhort’s a ginger too! 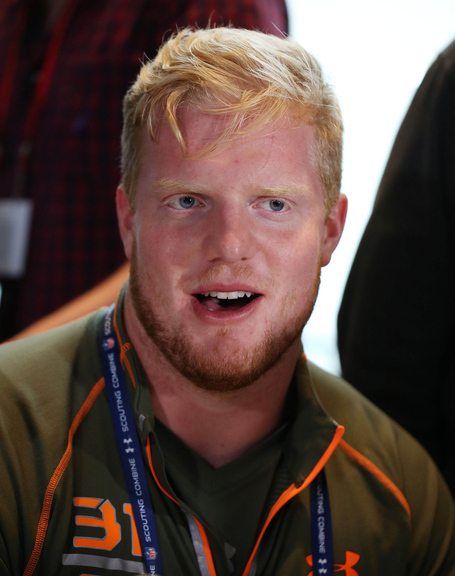 Okung’s combine is notable for his 38 reps on the bench press with his over-35" arms. That is the most of any current Seahawk, and more than all of this year’s prospects save for one. Fascinatingly, Okung comes out looking pretty similar to a guy that will likely go early in the 1st round like Russell did: Texas A&M’s Jake Matthews:

The infamous (first) D-tackle to OL conversion. Crazy, crazy athleticism for Sweezy. I mean just comp his numbers to Matthews’ up above. Sweezy’s are even better than the 1st rounder’s. Sweezy’s height puts him in between guys like Cyril Richardson and Ryan Groy, but those guys have 20-30lbs on Sweez. So we’ll drop down a little more in height, and find Nevada’s Joel Bitonio, who had an impressive combine:

Many will want to talk about Bitonio as a right tackle, but maybe these numbers translate as him at right guard.

(Sidenote: in a strange coincidence, we actually end up with three Seahawks bunched together in the 6043 to 6045 range coming up next.)

Now HERE is where we find the guy who matches up to the really stout Cyril Richardson:

I would never think of Richardson playing at OT, so maybe this is a sign that Bowie’s future will be at LOG. Also, doesn’t this just make you want to drop Cyril like 3 rounds in your next mock? It does for me.

I guess I never really noticed how tall Unger is for a center, but at almost 6’5" that is pretty big. Max looks very much like Arkansas’ Travis Swanson on paper:

Swanson is generally considered the #1 center this year, so to see his numbers up against Unger’s really shows how good Unger’s agility was coming out of Oregon. Still an underrated talent even here in Seattle.

At first I was scanning the spreadsheet looking for guards that resembled Carpenter, and none really fit. But then I remembered…Carpenter was a tackle at Bama! And then the match popped out right away: Stanford’s ROT Cameron Fleming:

I really need to double check if the listing on Carpenter’s broad jump is not a typo, cause that seems bananas for a guy better known for his power than his explosivity.

By far the easiest OL match to pick out. Literally the exact same size, so they were right next to each other on the height-sort. LJP matches up to Florida’s Jonotthan Harrison, who just happens to also play center:

Okay, for Fat Rabbit, I’m going to give you the doppelganger blind to make a point on the athleticism advantage found in the second DL -> OL conversion project:

Player X is one of the top center prospects in the country this year: Weston Richburg (currently draftscout’s #2 center), and Rabbit’s numbers smoke his. Even if Smith caps out at a backup level player, that is still some crazy good value.

Whereas in the doppelgangers I did at WR and TE I had a really strong idea of prior to the combine, thanks to my pieces focusing on those groups specifically, I had not done OL study that deeply yet. So there weren’t many Seahawk Olinemen that I had an idea of who their comp might be. Except for Bailey. For Bailey, I saw a guy that was a bit short for a guard, but had long arms, and who played well at an SEC school. I was instantly reminded of Bailey when I watched LSU’s Trai Turner. And the combine confirms it:

Unfortunately, Turner and Bailey both skipped out on some of the combine disciplines, so we can’t know how the compare in either jump(s) nor SS/3C. But the numbers we do have are really close. Turner seems to be getting pretty nice, 3rd round buzz in some circles (only a 7th rounder by draftscout), which makes me wonder why Bailey fell so far. But…benefit to Seahawks for the league’s mistake.

I couldn’t find any combine or pro day numbers for McDaniel, so all I’m left with is the simple ht/wt. And by those numbers, the closest comparison is Virginia’s Brent Urban at 6070/295. But just imagining McDaniel and the Canadian Urban at the same time seems completely off-base.

We’ll talk about Red in spite of the recent news. In fact, it’s almost more appropriate to look for a similar player now that we officially don’t have Red coming back.

First of all, the test numbers you’re about to see for Red are insane for a 318 lb person. Probably the best approximation physically is Penn State’s Daquan Jones (6036/322), but Jones ran a 5.35. Probably the best match in the speed/explosion tests is Missouri’s Kony Ealy, but Ealy weighs 45lbs less than Red. I’m gonna post Red next to Kony just for the novelty of it:

Clearly Kony has better change of direction, but clearly Red can get it going and scare you more once he’s on his way.

Actually, Ealy isn’t too far off from Bennett’s numbers either (with Bennett edging him out in most categories). But I’m going with Oregon State’s Scott Crichton because it was a surprise to me:

After a 9 sack, 17.5 TFL sophomore season; Crichton put up a 7.5 sack, 19.0 TFL junior campaign…and yet his stock is down. I’m sure some of the folks down in Tacoma would love to hear about their hometown kid getting picked by the Hawks. I need to watch Crichton again.

The big OZ actually ran a crazy forty, but then he lost it when he had to show he could change directions. Daquan Jones is, again, a possibility as the comp here, but Jones’ forty is even worse next to Jesse’s. I’m going to go with Jay Bromley (and shed a single tear cause I was trying to like Bromley, and I can’t like someone with less athleticism than Captain Cartilage).

Not an awesome doppelganger, but Bromley does have some potential to play inside at 3tech, or he could potentially play outside at 5tech like many think Jesse might do.

This is the guy currently rostered with the biggest chance to help himself now that Red is gone. Reports are that he’s up to 311 lbs, and he still has that 35.5" reach, and some history of rushing inside and outside. But that’s not why we’re here.

Unfortunately, there was literally only one DL at the combine that weighed over 280 and ran under 4.80 (Aaron Donald…and we know where his stock will put him). I’m forced to go with a player almost a full inch shorter who barely snuck in under a 5.00 forty:

This one blew my mind. This is one of the reasons why I enjoy this type of exercise. I have this idea that a prospect reminds me of a certain current NFL player, and then we get some hard data and it’s completely validated. Please note Clem’s weight out of Georgia, but then kind of disregard it other than to note that the prospect is doing similar work at a higher test weight:

Suffice to say; wow. What are the odds of that? And they both wear #91. Gives me chills.

I haven’t covered all of the practice squad guys, but I think I will try to for the DL because it feels like a group that will have an opportunity to step up. Due to free agents and cap casualties, the DL keeps getting sparser.

Brooks could have an opportunity to be an inside/outside pass rusher like Bennett, or he could end up in a role like Clinton McDonald had. A similar player in the draft could be Florida’s Dominique Easley, but he didn’t test as he’s coming back from knee surgery. I’m going with an Ivy Leaguer:

(Believe it or not, Avril is actually built almost exactly like Kenneth Boatright…before Boatright started bulking up. )

Much like there weren’t any 280lb guys that ran 4.80, there really aren’t any DL at all that ran under 4.60 (there were technically 2: Clowney, Webster, and almost Howard Jones). So we give leeway for speed and try to find similar size with decent speed. We’ve got Demarcus Lawrence; the closest in size, but not that close in speed, or we have Jonathan Newsome; not as close in size, but closer in speed. Unfortunately, Lawrence gets blown out of the convo by his terrible shuttle time, so we go with:

I left Boatright in with Avril because his comp is even more clearly Newsome. Here is a tape of Newsome owning Morgan Moses all day:

I’m not really thrilled how Mayowa compares to anyone at the combine this year. But I will say, his numbers next to Clem’s are pretty interesting. That’s actually been a really interesting confirmation of sort of a subconscious thought I have about how PCJS hedge their roster with players of similar build all the time. Arceto Clark is a hedge for Doug Baldwin, Michael Brooks is a hedge for Michael Bennett, etc.

Now the question becomes: will it take Benson five years to find his game like it did for Clem? It’s possible it will come faster for Benson as he has an advantage Clem didn’t have…Benson is STARTING his career already on a Pete Carroll coached team.

I really don’t like any of the combine players as comps for Truck. I’m going to pull Easley in for this one, but since we don’t have numbers for Easley, we’ll just remind ourselves what kind of stuff McDonald did at his pro amazing pro day:

I’ve got another player that wasn’t at the combine that may measure up better to McDonald, but he will remain nameless for now.

This will be one of the rare instances in this story where the 2014 player is actually looking better than the Seahawk! I’m giving Cherrington comp to Justin Ellis:

Hill is another one that falls into the "in-house hedge" category, thanks to his resemblance of Brandon Mebane.

I’m going to use 3rd round pick Jordan Hill to illustrate that a 2014 prospect is currently being massively over-valued We’ll do it Player X style again:

Doesn’t it seem like Bane should be listed at a bigger weight? He just looks bigger than that to me.

I really don’t love any of the DT that were at the Combine to reference to Mebane. The closest might be Utah’s Tenny Palepoi, but Tenny is down 11 lbs to where Mebane was when he left Cal. But, that’s not a great comp.

There you go. The lines have been covered. Stay tuned for the last part of the doppelganger trilogy; covering LB’s and DB’s.