Last week, we figured out how to calculate the SPARQ formula. But what good is a fun new toy if you don't take it out for a test drive?

Offensive line is notoriously one of the most difficult position groups to analyze based upon combine drills. So much of what's important to play in the trenches doesn't show up in the 40 or vertical jump. Understanding that we're merely measuring athletic aptitude for the position and not how well a player will actually perform, it is still possible to use SPARQ to take a broad look at offensive line prospects.

To be clear, I'm not implying that the Seahawks evaluate offensive linemen with SPARQ the same way they do for runnings backs, LEOs, etc. The idea of this post is that we use the data and metrics available to us to see what correlation exists, if any. So while SPARQ is not a stat that's really intended for this position group, I still think it's useful to take a look at the numbers and see if any positive trends can be identified.

One final note: a huge thank you to Tony Wiltshire. In the comments of the last week's SPARQ post, he linked to an incredibly comprehensive spreadsheet which supplied all of the data for this exercise. Check out his twitter and give him a follow.

No analysis is complete without context, so I took a look at the existing Seahawks roster to see what kind of athlete Seattle's sought in the past. I've also included a few PCJS draft picks who aren't with the team. The idea here is to get a feel for what Seattle values in offensive linemen, and how we can isolate potential Seahawks targets. Also, I know that Max Unger wasn't drafted by the current administration. They still chose to pay him and keep him on the team, though, so he's included here.

It's important to understand that SPARQ results for the OL will be lower than for just about any position. The SPARQ baseline is probably about 90-95 for offensive linemen, so the Seahawks rank considerably above average as a unit.

We now have numbers that show how SPARQ'd each lineman is. Good! But does that number really tell us much about what Seattle uses to evaluate offensive linemen? Using some guesswork and conventional wisdom, I made a few minor adjustments to the formula. Instead of using the 40 time, each player is evaluated by their 10-yard split. Interestingly, the average and standard deviation for the 10 and 40 are each separated by about the same constant factor (around 2.8), so I just calculated an "effective 40" based upon the 10-yard split and used the same weighting as in the original SPARQ formula.

It's obvious from the existing roster that Seattle offensive linemen have very good times in the short shuttle. As agility intuitively makes sense as an important input (and particularly so in a zone-blocking system), I added the 3-cone drill as another input into the SPARQ formulation, again normalizing so that the average SPARQ did not change. The relative weighting matches that of the short shuttle drill.

The actual weighting of components in this new formulation may skew a bit much toward agility, but we're just trying to establish a pattern that emerges among Seattle players. It's not intended to be an absolute or comprehensive ranking of athleticism.

With this new positionally adjusted "pSPARQ" metric, the current roster is shown below.

As you can see, the average increase is large. To make sure I hadn't incorrectly normalized the values (or that I wasn't simply making the high-SPARQ guys higher and low-value guys lower), I checked the average increase from rSPARQ to pSPARQ among offensive linemen with 90+ SPARQs (read: above-average) from the 2014 draft. The average gain ended up being around a point, while the average Seahawk gain was six points. There is not enough data to establish the absolute significance of this result, but it supports the hypothesis well enough for our purposes.

Of further interest: Seattle has recently shown a tendency to target defensive linemen in the later rounds. As you will see in the next table, both the rSPARQ and pSPARQ for these players (Smith and Sweezy) is insane relative to the average offensive lineman. If our goal is to use SPARQ to isolate potential late-round sleepers and OL-to-DL conversion candidates, I believe this is a good indicator.

Now that we've established a basis and a few metrics, it's time to take a look at the 2014 draft.

Note: values that are bolded, underlined, and italicized are assumed. If four of the five necessary variables were present, I assumed that the player's 40 would be in the same percentile as his 10-split, 3-cone to shuttle, etc. It's not perfect, but does give an idea of where we're at. 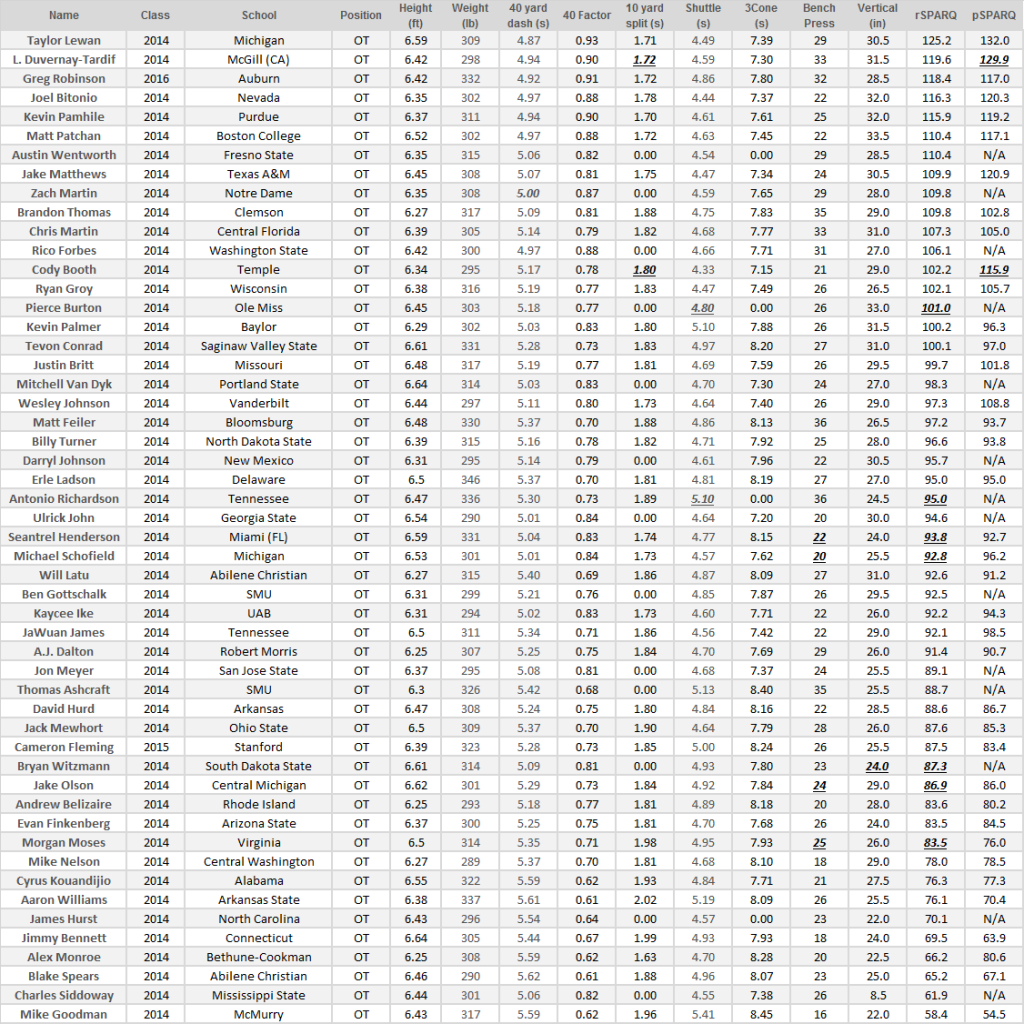 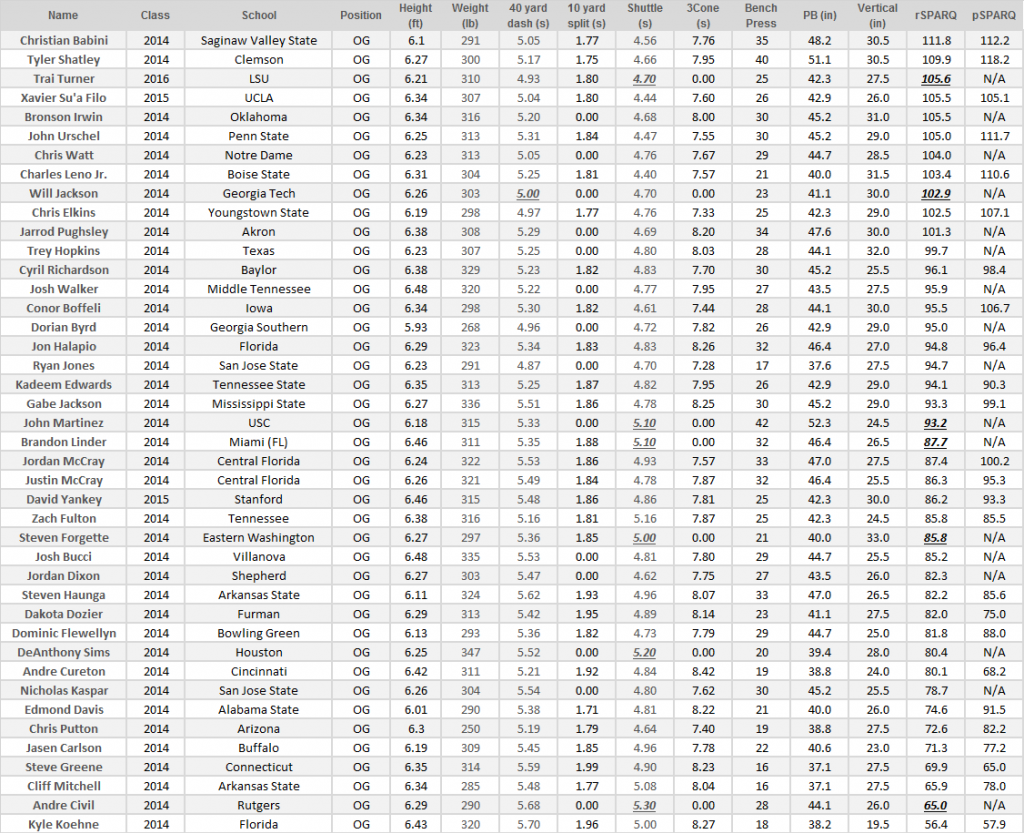 I know these are a bit tough to read. We're currently working on setting up a google doc which will help considerably.

We now have a pretty good idea of the Seattle OL profile. Less emphasis on the 40, vertical, and bench, with elite times in the 3 cone, short shuttle, and 10 yard split. I'll finish up by highlighting a few players who happen to fit this mold. I've ignored prospects like Joel Bitonio who have great SPARQs but are projected to go in the first few rounds.

While Matt has a better vertical leap and 40 time than our old right tackle, he and Breno Giacomini are nearly identical when it comes to the other parameters. Both have elite-ish 10-yard times, cone drills, and shuttle times. Breno clocked in at 6070, 303 lb; Patchan lists at 6062, 302 lb. If, as rumored, we're interested in working on offensive line down at the lower end of the draft, this could be a very realistic option.

LDT! I'll abstain from talking too much about him as he's one of Jared's guys and I'm much less educated on the subject. Suffice to say: he's an absolute freak, Sweezy-level outlier of an athlete playing the offensive line. He'd also be Sweezy-raw. Depending on how you've handled the Sweezy experience, this could be either a positive or a negative. Regardless, his numbers are like out of this world. The only offensive lineman to beat his 3-cone was a converted tight end. It's probably going to be a long journey for whatever NFL team takes him, but there's real potential for a gem here. He fits the profile perfectly.

That's about it on the offensive line for now, but we'll return when we look at the defensive tackles. Seattle's chosen an athletic freak and gone DL-to-OL for two years running now, so it wouldn't be a big shock to see it happen again.

Let me know if you have any questions -- we should be looking at tight ends later this week. I'll also be tweeting SPARQ-related thoughts all week, so give me a follow if you're interested.