As a big fan of Davis Hsu's previous articles on adjusted SPARQ ("SPARQ a Fire"), I was quite disappointed to find that the Nike SPARQ calculator was no longer available to the public for the 2014 draft season. Because data analysis is fun and there's a mountain of SPARQ data available, I figured I'd try to back-calculate the formula.

Note: SPARQ results are available everywhere. I used the 2012 HS SPARQ data from ESPN to develop an initial model and the numbers run by Davis last year to fine tune the calculation for NFL-level numbers.

Also, feel free to skip to the bottom for results and skip all of the words in the middle.

It's important to note that it is unlikely for any attempt to perfectly replicate the formula to be successful. My data set from ESPN included 16390 athletes; add in around 80 from Davis, and it's in the neighborhood of large. Consider, though, that we don't know the form of the equation. Is it multiplicative? Exponential? Additive? We know the formula inputs (weight, 40 yard dash, shuttle, powerball toss, vertical jump), but it's difficult to determine at first blush the relationship between the variables.

I would need the calculator to be public to find the explicit SPARQ formula; by holding the other four variables constant, it would be a relatively simple problem to find the influence of any single variable. Without access to the source, these layers of complexity made an exact and explicit formulation of SPARQ very difficult and probably impossible.

My first attempt to replicate SPARQ was a quick and dirty method which generally worked pretty well for my initial data set of 147 elite HS SPARQ athletes. And then, well, Vernon Davis broke my calculator. It turns out that NFL athletes are freaks of nature and the simple model I was using had trouble coping with the non-linearity introduced in SPARQ at high levels of performance.

To skip a fair amount of explanation: I messed around with some plotting and decided that the formula was a product of five multiplicative factors. This ended being a good (enough) assumption, but I mainly got there with intuition and it's not really an important part of the work.

With five variables, a decent regression is difficult but semi-reasonable with the huge data set to which we have access. The first key is to use Excel sorting to find athletes with matching scores in 4 different categories. By holding these four constant, it was possible to find 15-20 matching pairs for both the 40 and shuttle. By setting an arbitrary datum point of 1 at the lowest value, it was possible to use this paired data to calculate a rough curve which represented the impact of each parameter.

Each of these exhibited a very promising linear relationship up to a certain point, turning non-linear at low levels of performance. For example, the 40 yard dash is linear up to 5 seconds, with diminishing returns thereafter; this means that the jump for a 4.2 to a 4.3 is much greater than that from 5.2 to 5.3. I believe that the idea of this is to make it difficult for one bad category to destroy the athlete's score.

Show below is the initial regression for the 40. 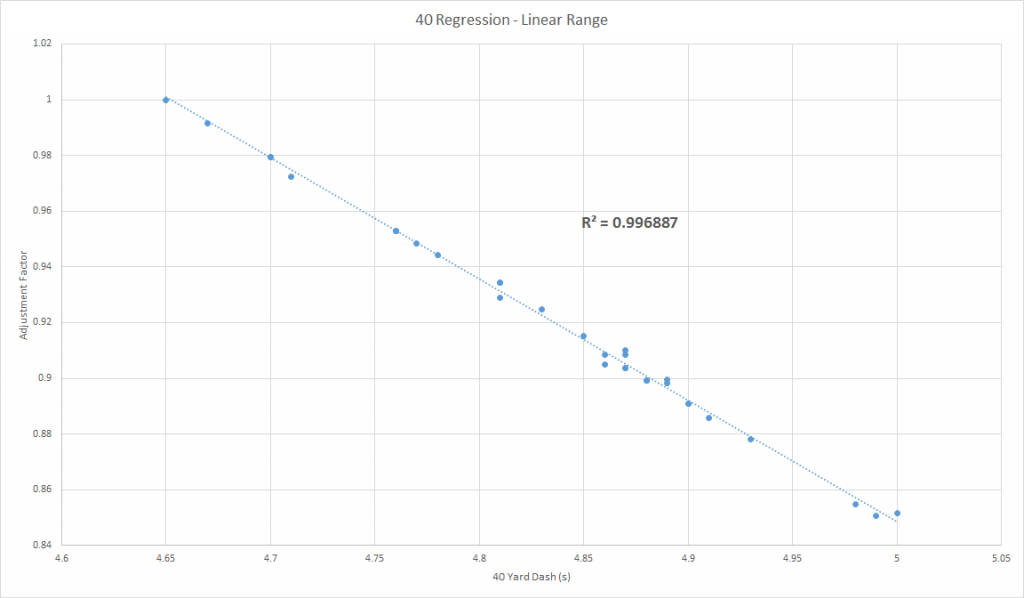 The linear regression works out to have a 0.997 R-squared, which means the 40 is almost certainly exactly linear in this range (4.65 to 5.0). The problem here becomes apparent: we only know the relationship between 4.65 and 5.0 because that's where our data lies. High school athletes don't run 4.4s very often, so the odds of finding two otherwise "matching" athletes with differing 40s in that range is very unlikely.

I did the same analysis for each of the other three variables. The issue there is that it was difficult to find a data set of more than 10 matching athletes for these parameters. As I felt pretty confident about the "linear range" of my 40 and shuttle calcs, I used athletes who matched in three categories, were close in either the 40 or shuttle, and differed in one value. By making a small adjustment for the 40/shuttle, it was possible to ascertain the linear range of the three more problematic variables.

Unfortunately, SPARQ variables don't fall nicely on a line and we can't just use the last section to create a complete model. SPARQ uses a linear range for typical high school values of athleticism in all four speed/power categories (excluding weight), but was clearly more complicated at extreme values. Still, I figured my model was probably pretty good after the initial analysis I had done.

Unfortunately, NFL athletes are freaks. Vernon Davis single-handedly broke my initial calculator and the new one wasn't faring much better.

To adjust for this, I created a new, more refined "high athleticism" data set. By combining the Davis Hsu numbers with ESPN's SPARQ leaderboard, I had 1200 data points which well represented the typical values you'd see in the NFL. Further work was then done with non-linear behavior at both ends of each variable range to find "good" approximations of the formula. Some variables had more variation than others, with weight being by far the most complicated.

After adjusting each variable a number of times, I multiplied each of the five adjustment factors together and fit a curve to the actual SPARQ values. As a note, the adjustment factors were normalized to average NFL values (taken from 2010-2014 NFL draft data). Thus, a factor of 1.0 means that the athlete is exactly average at the NFL level. This value correlates with a SPARQ of 110, which fits into the range which Davis defined as average in his work last year. It's pretty cool to see the data so closely match the assertion. 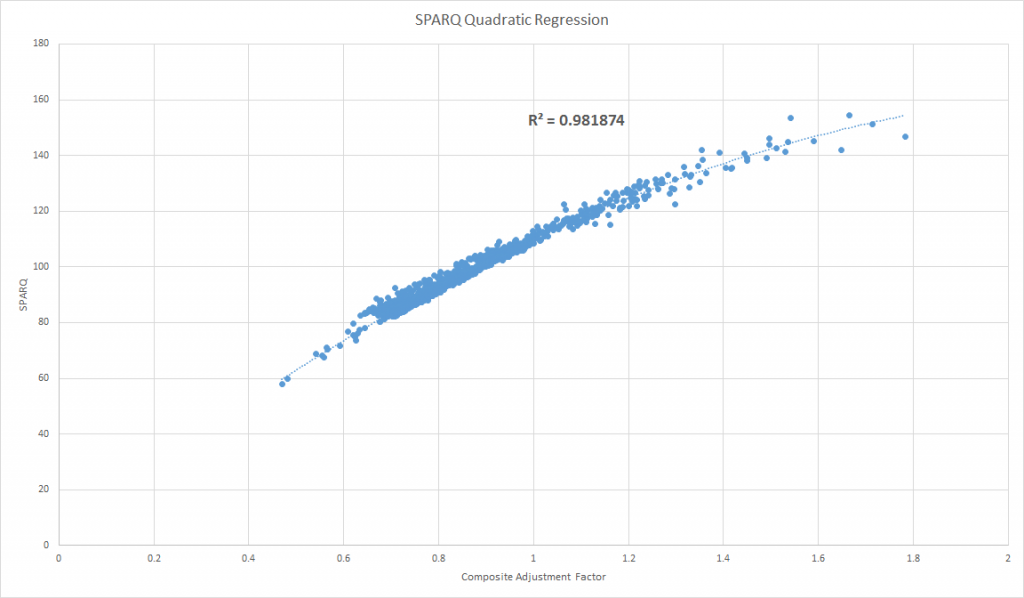 The correlation is very strong, and tells us that SPARQ values the jump from a factor of 0.6 to 0.7 more than 1.4 to 1.5. If this were linear, the numbers for your Bruce Irvins and Vernon Davises of the universe (not of this world, natch) would be insane. The R-squared value of 0.98 is very good.

For the curious among you, the standard deviation for rSPARQ error is 1.80, meaning that, assuming a normal distribution, 68% of the data is within 1.80, 95% is within 3.60, and 99.7% is within 5.4. Basically, For every several hundred tests, you'll get a player with about 6 points different than Nike's definition of SPARQ. For our purposes, most of our rSPARQ results will be very close to the actual formula.

At the NFL combine, the bench press is the standard measure of strength. SPARQ high school camps measure a player's "powerball throw," which means we'll need to figure out a reasonable relationship between the two. Davis did some excellent work in the above linked article in creating this model, eventually arriving at the conclusion that adding 20 to a player's bench press is equivalent to their powerball throw score.

I think this is a very good estimate of behavior at the average values, but while working through the data earlier, I discovered that the range of powerball throws is very small compared to that of bench press. Essentially, test results are normally-ish distributed; the standard deviation of bench press is roughly double that of the powerball throw. The sample sizes for these tests are large and these ranges are thus likely to be very accurate.

By no means is this a perfect conversion. I'd be interested in any ideas out there on a better way to do this. I just wanted to quickly get something on the page.

This conversion does differ from Davis, so some of the scores seen in the past (e.g. Christine Michael at ~150) will be a little different now, with the new values giving a little less credit to strength freaks.

The one advantage of this model is that it's in excel. So, instead of manually plugging in numbers on the SPARQ site, it becomes relatively trivial to calculate rSPARQ values for large sets of players. To reward you for sticking around through the post (or for at least reading the beginning and end parts), the following table shows the rSPARQ values for 2014 NFL draft wide receivers. 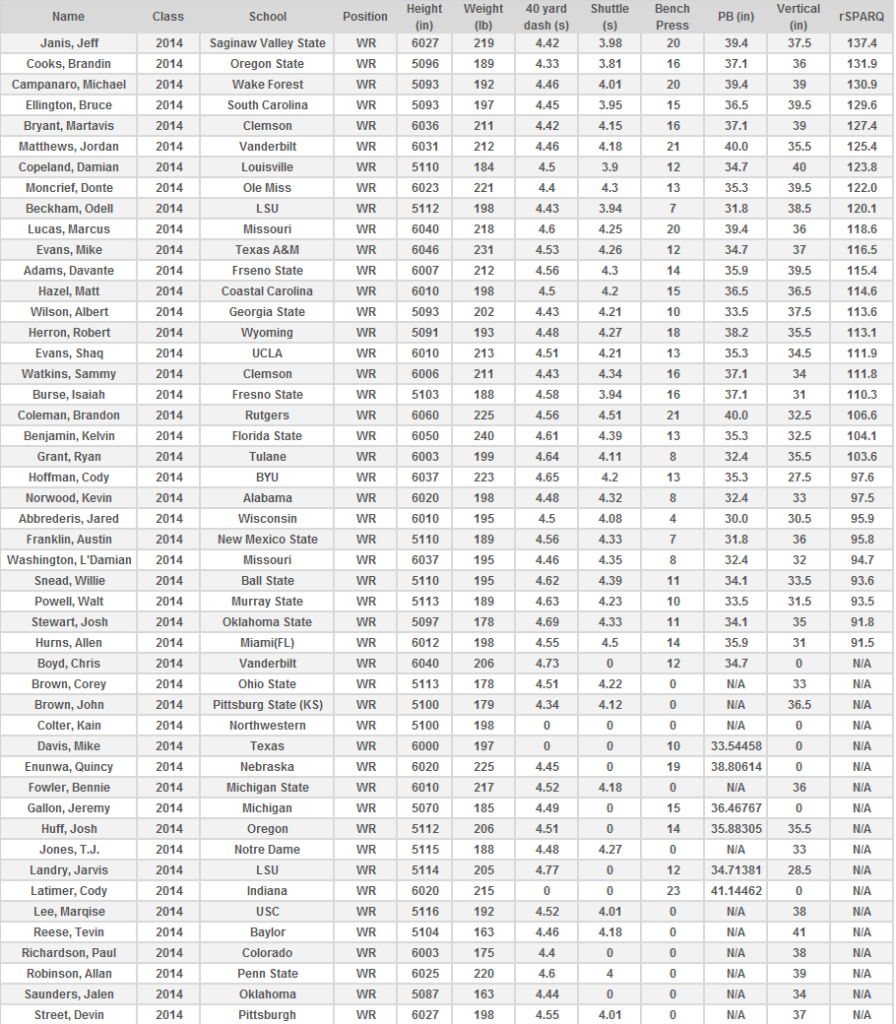 Hopefully we'll be able to utilize rSPARQ a bit more as we get closer to the draft. Let me know in the comments if there are specific players/comparisons/position groups you'd like to see.

ETA: all of the above values are from the combine. If someone wants to set up a google doc with best of pro day/combine for these guys, I can make the switch.