With a flurry of recent visits to the VMAC, linebacker looks like one of Seattle's biggest priorities in the 2014 draft.

If you missed earlier entries in the series, it may be helpful for you to catch up before reading this one.

As a reminder of the basic terminology, here's a little summary of our two metrics.

pSPARQ - a "position-adjusted" or "profiled" SPARQ which takes into account a few more parameters, weighting them according to public comments from Seahawks brass and analysis of the existing roster. The main change is using broad jump more than bench press with vertical jump to determine the player's power/explosiveness SPARQ contribution.

There was a fair amount of conversation about this after the last post, so I figured I'd shared my thoughts on methodology here. The issue arose from Anthony Barr, who dramatically improved his 40 time at the UCLA pro day. Some people felt that this was unreliable data.

First, there is no perfectly reliable data available to us at the combine. Even electronic times aren't completely objective; a player's 40-yard dash in Indianapolis is influenced by the player's specific running style, as different motions trigger the system at different times. Players like TraShaun Nixon have slick grass fields at their pro day, and coaches like Urban Meyer tend to have players who test very well at their pro days. There is variance and bias, whether human or environmental.

There's also a general statistical point to make here. Last time, we talked about impulse and I geeked out about physics for a while, and this time I'll try to introduce a statistical principle with as little pain as possible. The central limit theorem says that, with a very large data set, sample results will tend toward a normal distribution built around an average. Essentially, enough test results will yield the true value of the test.

The corollary is that a single test can be unreliable. This is why a student can prepare well for a test, but fail it, while a similarly intelligent student with zero preparation might perform well on the same evaluation. If we really wanted to boil it down to the roots, sometimes weird things happen. A player simply might not perform well on a given day.

In fact, as a rule, we'd expect a given percentage of players to perform much better at their pro day than they did at the combine. We would also expect the opposite to be true, but players who run well at the combine typically don't run at their pro day. I've spent the last month staring at combine data, and Anthony Barr's not the only player to improve markedly post-Indianapolis.

As an aside, I have to note before I go on that I see this as a primary issue with sports journalism. It's a real pet peeve. Results are not perfectly indicative of process. Sometimes, a good run defense gives up a lot of rushing yards. Sometimes, a good team loses to a bad one and there's no real explanation. It's variance. Results are not necessarily reflective of ability.

In summation, we must have an objective and consistent methodology in interpreting data. It's vital to treat every player the same. Because so many prospects are not invited to the combine, my method is to take the best results from a player's pro day and combine, whichever numbers those may be. I can't make an exception and not consider Barr's new 40 time. It's more correct to evaluate the 40 time in context and understand the larger picture of what goes into SPARQ.

Linebackers are fun to write about. They're athletic, pretty easy to define, and Seattle likes them SPARQ'd to the moon.

To define the different roles, we can simply scan the Field Gulls archives for the appropriate Danny Kelly article.

I'd really recommend reading as he quotes Pete Carroll on the different characteristics of the Will, Sam, and Mike positions. It's important to understand the traits required of each position to fully and correctly process the results of data analysis. Data lacks meaning without context.

Because player types can be very similar from LEO to LB, I have kept the formulation the same for the two position groups. Luckily, the same positional normalization required for LEO works just as well for LB. This means that the numbers are directly comparable.

There's a very clear trend here: Seattle linebackers are athletic. Every player is above the 110 SPARQ LB average, and K.J. Wright is the only key contributor even near that mean value. Wright's outstanding length (at 34-1/2", he has OT arms) and instincts are what make him a phenomenal fit; generally, Seahawks that don't measure out in SPARQ are standouts in some other category which SPARQ fails to consider.

That broad jump result is out of this world. A 1.68 blows away any other Z-score for any other position group. The strongest test correlation on Seattle's roster is that their linebackers are great broad jumpers. There is not a single Seattle LB drafted (or priority free agent) in the PCJS era who has failed to broad jump 10 feet.

The numbers tell us that the desired traits in Seattle linebackers are speed and explosion, a statement which certainly matches the eye test. The bench press has the weakest result here, but it may have some relevance. It's already included in our pSPARQ formulation (albeit to a lesser extent than in rSPARQ), so there's no need to change anything.

In looking at the list of Seahawks, two key contributors (Smith and Wright) were drafted in 2011, and are thus entering the final year of their rookie deals. As it seems unlikely for Seattle to sign both, linebacker is a position that many expect to be a focus for Seattle in the draft.

This list was assembled by going through rosters at random. I attempted to provide a range of players that are applicable to the Seattle roster. As there doesn't tend to be a Brandon Spikes-type on the Seattle roster, that type of linebacker isn't included.

Similar to the Seattle roster, most are elite by SPARQ, with one player closer to league average.

Some linebackers may have been included in the LEO post, so if your guy isn't shown here, he's likely already been covered. Inside and outside linebackers were categorized by Tony Wiltshire, who has provided all data for this SPARQ study. Feel free to give him a follow on twitter and say thanks. 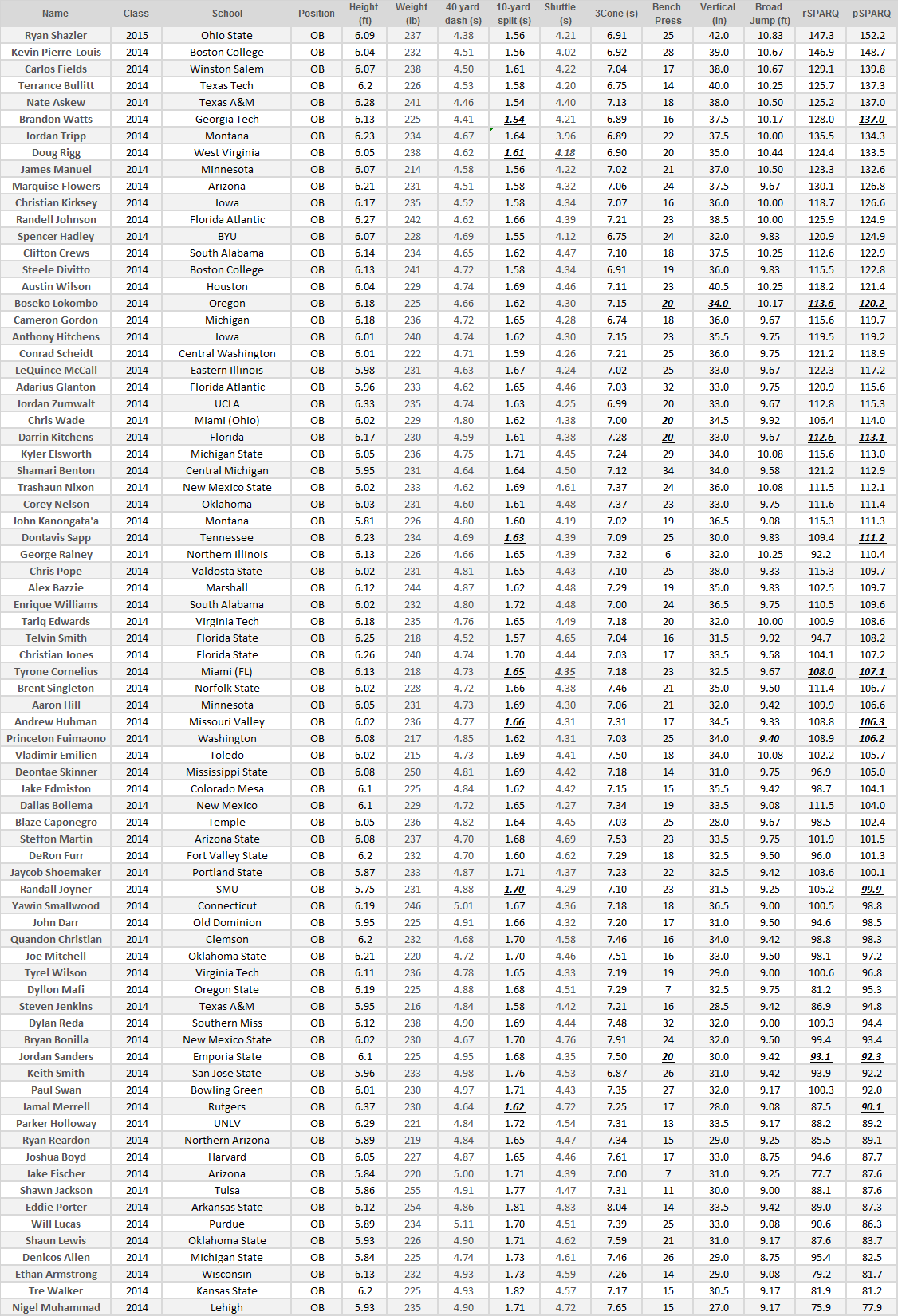 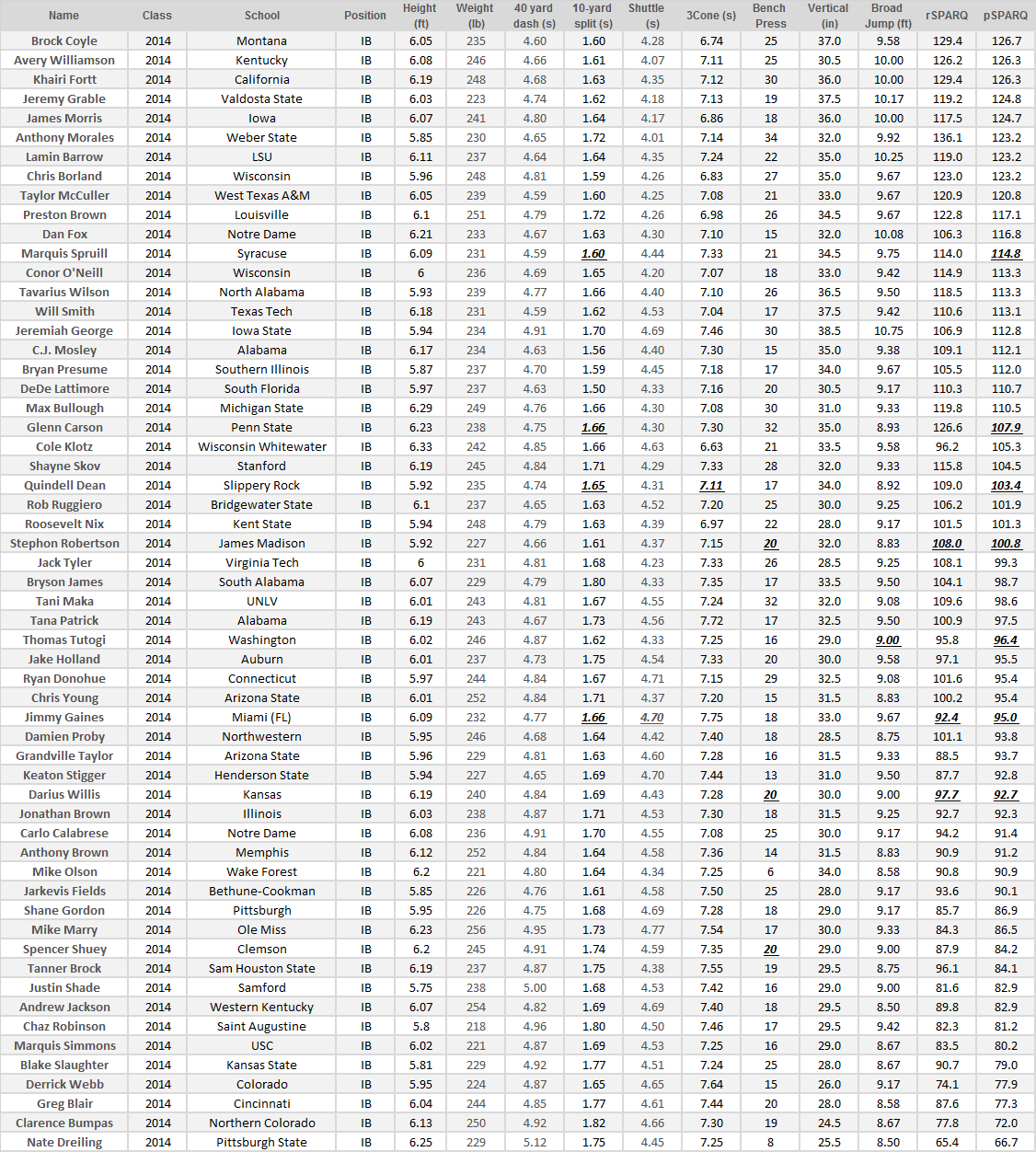 Now we'll take a slightly closer look at a few players who could end up being Seahawks in May.

I remember in one of my first days of undergrad physics class, the professor shocked us all: contrary to what we'd all been told, gravity wasn't always 9.81 m/s^2 (or 32.2 ft/s^2, for the staunch imperialists in our midst). I mean, it's basically 9.81 m/s^2, as that's the average if you calculate from the equator to the north pole. The idea is that gravity is pretty close to 9.81 m/s^2, and it doesn't really matter if it's off by a thousandth or so.

There's no real point to this digression. I guess I just got to thinking about gravity after reading about Ryan Shazier. 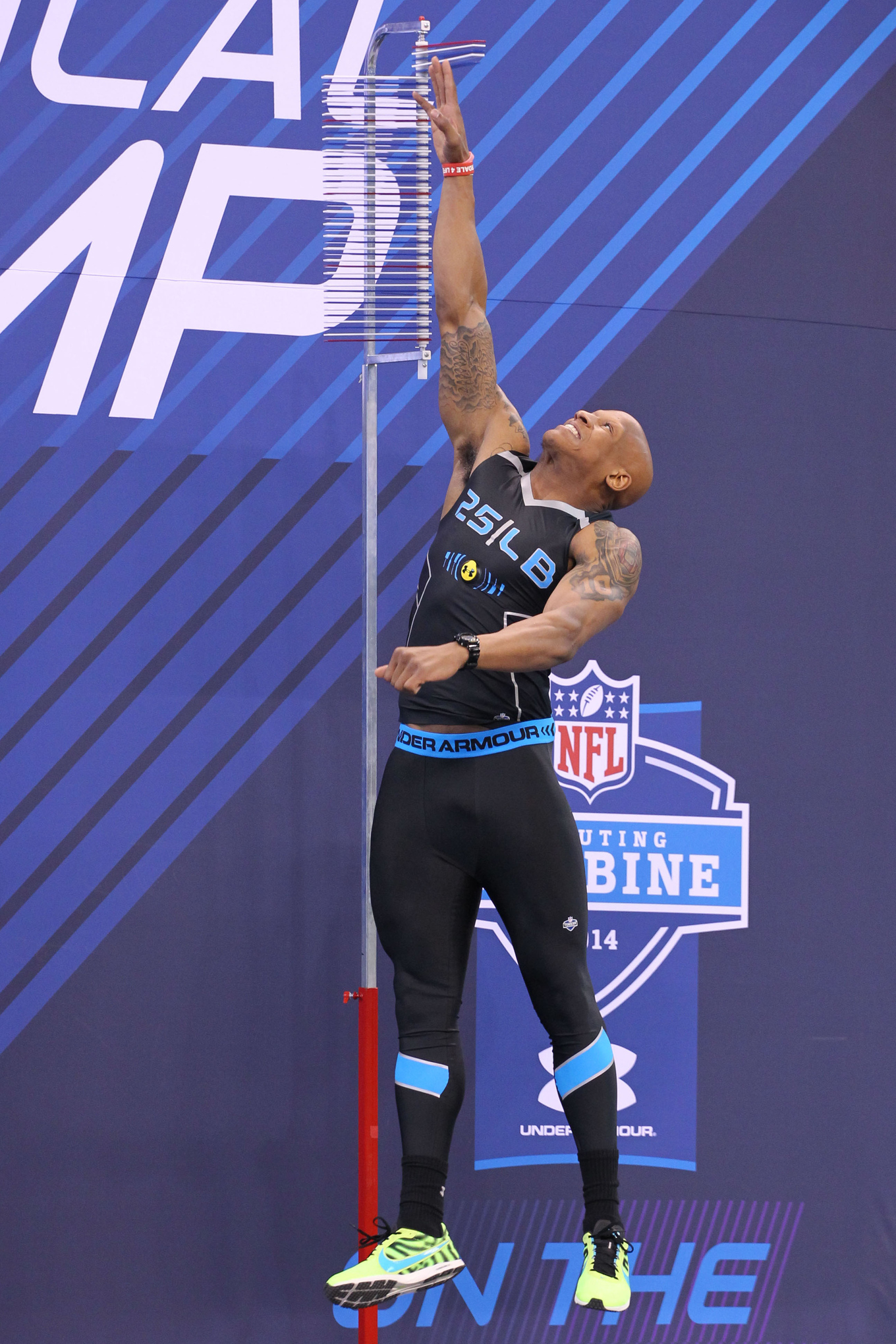 There's not a whole lot to say. If he's there, I'd take him in a heartbeat. He probably won't be, but I'll keep hoping.

The linebacker post is somehow both the easiest and hardest to write, as most of the same things could be said for all highlighted players. Pierre-Louis is basically an ideal Seattle linebacker. He's the same size as Malcolm Smith and is elite in every athletic category. He's thought to be a day 3 pick, which is the Seattle sweet spot for SPARQ-freaks. There are just so many athletic linebackers that it's difficult to isolate any single linebacker as being particularly likely.

The Seahawks were present at KPL's pro day, with fellow SPARQ all-star Matt Patchan also in attendance. It's anyone's guess as to which of the linebackers they'll actually pursue next month.

Coyle and Tripp were recently in Seattle for a workout, so this fits the bill of a pretty typical Seattle move -- show interest in a number of prospects at the same school to obfuscate their intentions. Really, you could see Seattle liking either of these players as they are both similar to current Seahawks.

Considering Coyle's sub-10' broad jump (9'7"), I lean toward him being a potential smokescreen. That's not to say there's no potential interest; he's SPARQ-y, and we don't have a large enough sample to know that failing to broad jump 10 feet is a deal-breaker. The data simply leads us to the assertion that Tripp is a more likely target.

It's also quite possible that Seattle likes a different Montana player altogether and both Tripp and Coyle are attempts to throw other teams off the scent.

Ah. Now here's a live one. It was reported over the weekend that Fields will be visiting the VMAC this week, so his presence near the top of the SPARQ leaderboard is of particular interest.

There's an obvious SPARQ comparison to Carlos Fields: Luke Kuechly. Kuechly has essentially the same SPARQ profile at a slightly larger height and weight. Fields is a slightly longer athlete, with 32-7/8" arms (to Kuechly's 31") and Seattle's shown a proclivity to exchange size for athleticism at the linebacker position.

Yet another VMAC invitee, TraShaun Nixon's low SPARQ would make one question his Seahawk credentials. He's the perfect example of a player for whom the numbers are deceptive. His broad jump and vertical are both good results, but his speed times are all mediocre-to-poor.

We have it from NFL.com and Nixon himself that the turf was poor at the NMSU pro day. If we look at another Aggie who performed at both the combine and the pro day, we can get a basic idea of how much Nixon's numbers were hurt by the conditions. I would conservatively estimate that Nixon is a true 125 SPARQ, and probably closer to a 130.

Field Gulls' Jared Stanger brought up Navorro Bowman as a similar player type, and with estimated numbers for Nixon, the physical comparison is quite close.

What do we make of all of these VMAC visits? It seems very likely that Seattle is in the market for linebackers in the draft. With both Wright and Smith only contracted through 2014, this is one of the main positions to watch.

As always, I'll be around in the comments if you have any questions or thoughts. We'll return later in the week with some discussion of the secondary.