It's time to delve into a position where Seattle draft picks look like a collection of the SPARQ All-Stars.

If you missed earlier entries in the series, those may be useful to read before continuing here.

We'll again work on creating a Seahawk profile by looking at the existing roster. The following table shows a number of Seattle tight ends who are either on the roster or were drafted/signed by the current regime.

Just a cursory glance of the numbers yields some interesting insights. First, Seahawk TEs are freaks. Second, even the slightly ponderous Zach Miller performed very well in the agility drills and 10-yard split.

To really figure out the Seattle profile, I looked at the Seattle average relative to the overall average of the 2014 class. The results are eye-popping.

Z-Score represents the number of standard deviations that the average Seattle TE differs from the 2014 TE average. Small sample, but it's reasonable to suggest that Seattle isn't all that interested in the bench press. And yes, Jameson Konz is a freak and does influence the sample a bit, but the numbers don't change all that much removing him from the equation.

Now, I was working on this post, going along my merry way when John Schneider went on 710 AM and started talking about athletic traits they like to see in prospects. He's a great guy, that John Schneider.

He specifically mentioned 10-yard split as something they look for, particularly in offensive linemen. He also noted the short shuttle, 40, and broad jump as being influential. These are all numbers we have access to for the majority of draft prospects, so it's relatively painless to create a composite which goes along with Schneider's thinking.

Not to get too far into the boring nuts and bolts, but SPARQ has basically four distinct parts: speed (40), agility (shuttle), weight, and power (powerball and vertical). To create a metric which takes the new variables into account, I kept the form entirely the same, and just added things in and applied some weighting.

For speed, the weight of the 40 is double that of the 10, and it's the same for the shuttle and 3-cone. The "power index" part of the formula now consists of vertical, broad jump, and bench press, with vertical and broad jump being much more influential than bench press. As noted in the comments of the original SPARQ post, it's not entirely clear that bench press really measures the "explosiveness" that the powerball/vertical drills are meant to capture in the HS SPARQ camps. At its very root, power is a unit of energy per time; it's fast-twitch, not purely strength-based like the bench. With Schneider telling us that they use broad jump for this purpose, our new metric is probably better suited to the job than rSPARQ was.

This helps us in a variety of ways. First, by introducing more variables, you slightly reduce the dependence of the formula on any single variable (well, other than weight, but that one's pretty safe). This is important to consider because any single test isn't absolute or perfect. Zach Miller might be a little faster or slower than his 40 time shows, because running a few times on a certain day doesn't give us a perfect idea of a player's actual ability. We're now less sensitive to variance, which is particularly important with the pretty erratic 10-yard-split times.

Now that we have a metric which uses all of the correct inputs, we can take a second look at the existing roster.

Most interesting to me is the impact on McGrath and McCoy, both developmental players acquired late (UDFA and sixth round). Zach Miller's 117 is very good when considering the position.

The same note applies as before: values that are bolded, italicized, and underlined are assumed. If four of the five necessary variables were present, I assumed that the player's 40 would be in the same percentile as his 10-split, 3-cone to shuttle, etc. This means that if a player doesn't have a 10-yard split, his speed index is only influenced by his 40, and things function similarly for other categories. 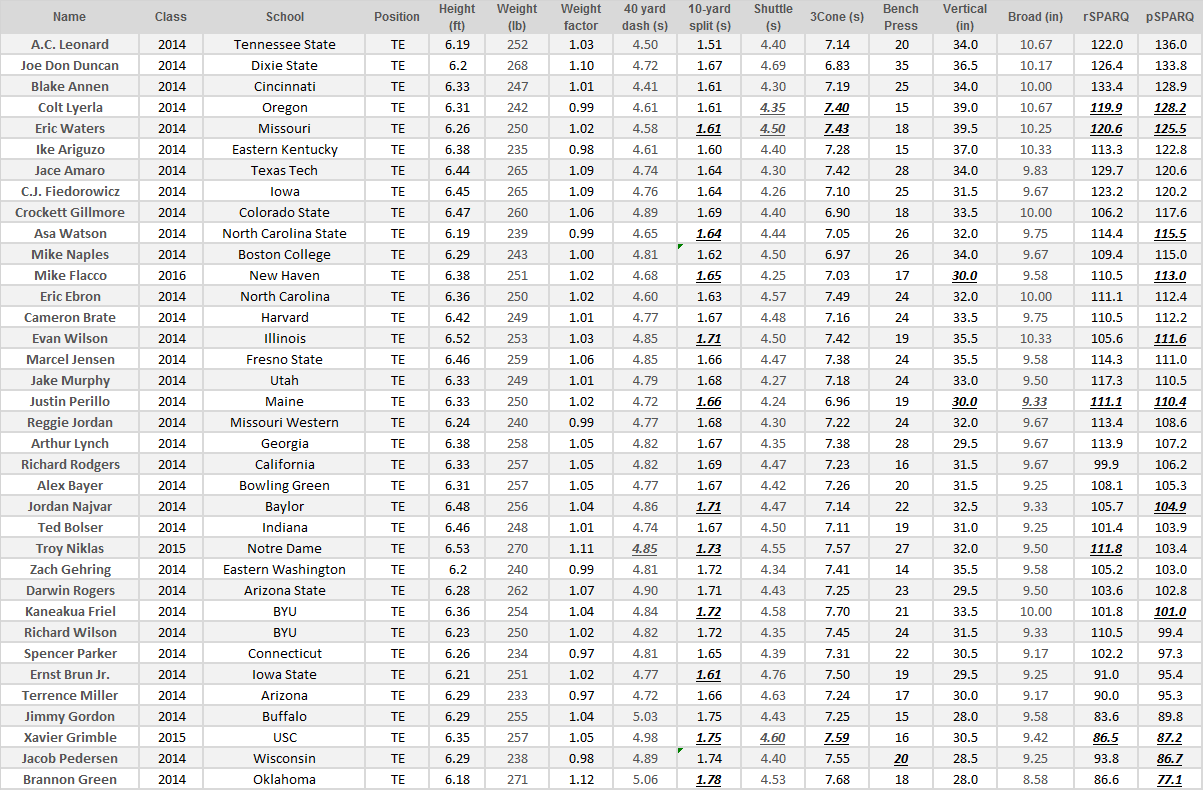 And now, a few players who look suspiciously like current Seahawks and are available in the mid-to-late rounds of the draft.

Can we run a background check and make sure that Luke Willson didn't enter the draft again? Annen has elite results in the speed and agility categories as well as good vertical and broad jump numbers. Similar to Luke, he wasn't elite in his college production and played behind a more-highly regarded tight end prospect for most of his career (Travis Kelce, 2013 third-rounder). At 6'4'', 247lb, he certainly looks and moves like a possible target. I mentioned his name to Danny and Jared, and both noted that the tape agreed with SPARQ in this case.

A little lower on the SPARQ spectrum, but is eerily similar to one Zach Miller, right down to the relatively poor bench press and 40 results. He has big 10.5" hands and 32" arms to go with a 6'6", 260lb frame, which mean he's basically a bear who moves like a ballet dancer. Consider me sold, especially if he goes in the 4th-5th round as is the general consensus. This is a good example of SPARQ agreeing with tape; Gillmore's been a favorite of Jared's for some time, and the numbers only serve to back that up.

Colt Lyerla being an elite athlete isn't exactly a surprise, per se. He's one of the more fluid and explosive athletes I've ever seen at the tight end position, and SPARQ is really not necessary in this case. It's not that he's just quick or fast; it's that he can seemingly explode omni-directionally with incredible suddenness. He's available in late rounds not because of a low profile, but because of possible character issues. He's such a classic Seahawk pick that it still seems possible we take a flier on him despite the red flags.

I mean seriously, guys, what an athlete.

A.C. Leonard is similarly a SPARQ freak, but this is partially based on a freakish 10-yard-split which appears quite anomalous considering his 40. If it's true, then he's the top pSPARQ TE, but I'm more than a little dubious, especially as the 10-yard split is a hand-timed number.

Let me know if you have any questions -- we should be working our way a little further down the position list later this week.