NFC West teams like to shop for their UDFA's in very particular ways. And where the franchise is located matters.

In Part 1 of this project, I detailed where the Hawks' last four seasons of draft picks and UDFA's went to school.

Long story tldr'd: I found that the Seahawks FO has a preference for drafting from the SEC, but has historically gone to the Pac-12, the Big 12 and smaller schools to find its undrafted free agents. That got me thinking: how do the Hawks' rivals behave?

Do they also prefer to use the draft to nab the best choice cuts from the Southeast? Do they also like to shop nearby and at thrift stores for free agents afterward? I didn't set out to prove anything here -- just doing some research, killing time before the draft, hunting for trends.

Turns out the geographical trends, and the major-conferencistical trends seen with the Hawks hold true -- but they're much more apparent and significant in the UDFA period.

Nobody is surprised by this. The uniformity is interesting, though. While a four-year sample sizes is too small to form conclusions, what is true is that the NFC West members tend to spend their draft picks in the same proportions, when it comes to power conferences and small schools. Seattle, first: 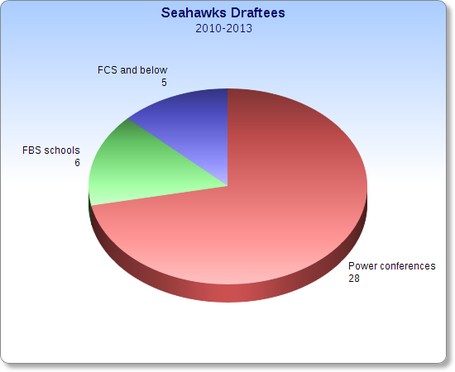 Then, the rest of the division: 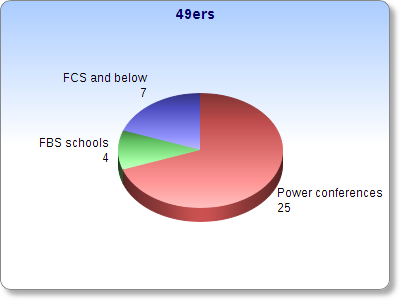 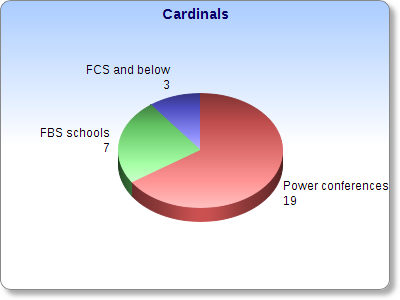 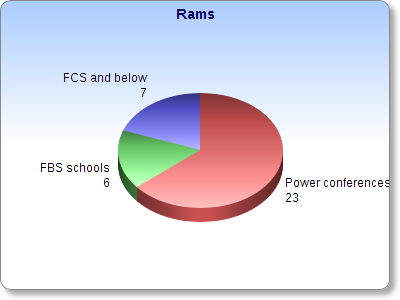 Easy take-away here. Each franchise risks about the same amount of draft capital on small-school players, while relying heavily on the power conferences to stock their cupboards.

Let's go on, now that your appetite is whetted... wedded? wetted? God, this language is the worstest.

After The Draft: Now We're On to Something

Actual trends appear... once the seventh round concludes. Spoiler: a pretty pretty map lies at the end of this post. But raw data first. As in Part 1, I broke UDFA signings down by conference. 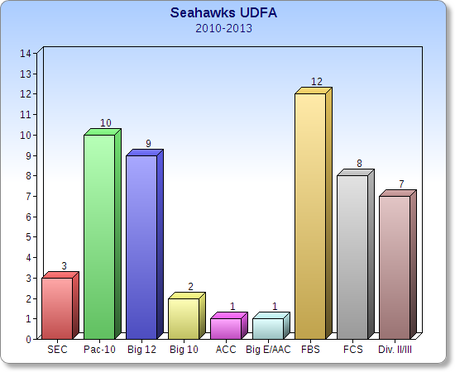 The rest of the division: 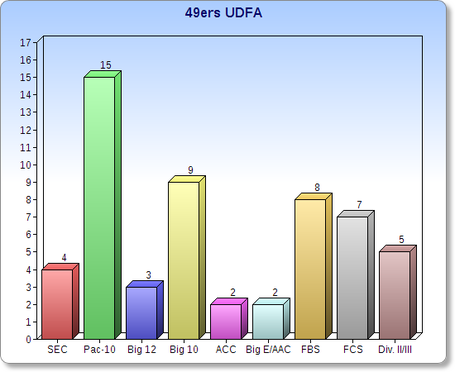 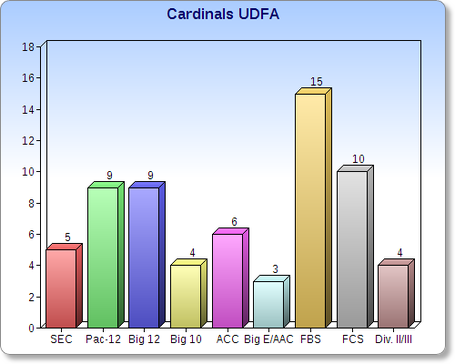 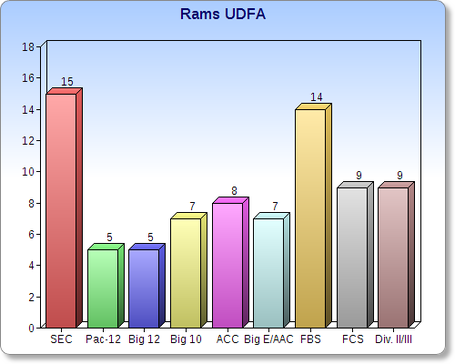 One manages to cull five observations from the above numbers.

1. The Rams poach the SEC's leftovers, but the rest of the teams don't. Fifteen SEC signings for St. Louis is more than the other three teams combined.

2. The Niners signed seven UDFA's from Stanford in the four years I studied. That helped them lead the division in Pac-12 signings. Seven of Harbaugh's former players found their way to the 49ers... but not Richard Sherman and Doug Baldwin. That must be because San Francisco is stacked with All-Pros at CB and WR already, right? RIght? Right.

3. The Hawks and Niners couldn't be bothered to pursue UDFA's from the ACC or the Big East Conference Thingy. They only signed six total, in four years That's no doubt because of the power conferences, those two leagues perennially rank at the bottom. Yet the Rams and Cards found a way to give cash money to 24 (!) players from those weak-ass conferences.

4. All four teams stocked up on undrafted free agents from small schools. The Niners signed 12 FCS and Div. 2 or 3 players, and that was the least -- the Rams brought in 18 small-school products, most among division foes.

5. Those Rams were also awfully busy on the UDFA market. They handed out 79 after-draft contracts in four years; the Cards were second with 65; the Niners were third with 55; and the Super Bowl Champions only signed 53.

This is where first the unforgivable puns happen, then the signees get broken down by region. First, I've got a busy table for you; then, the promised map. In this table, you can find out how much of each team's total UDFA crop hails from any one region. For example, 17 percent of the Niners' UDFA's are from the Far West and only five percent of the Rams' signees came from the Northeast.

(Note in case you were wondering:

Far West = everything that touches the Pacfic

Midwest/Plains = everything that touches IA, plus MI, IN, OH

Northeast = everything from PA and MD up to ME

Southeast = everything from KY, WV and VA on south.)

You might already be able to tell from that table where each team's tendencies lie. But to illustrate the same data in a different way, the hyped map's time has come. In this piece de resistance, a team's name is in larger font if it is the leading UDFA recruiter in that zone. A team's name is in smaller font if it gets at least 15 percent of its UDFA's from that zone but is not the local leader. 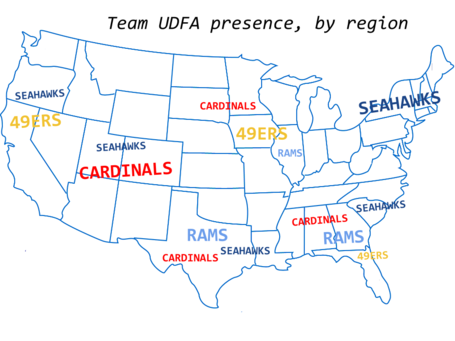 1. The Hawks don't do things like the rest of the crowd. They snag UDFA's from everywhere. No less than five per region, no more than 11. Thus the big name where other franchises don't bother as much, and the five names spread across the country. You can't pigeonhole this front office. It's almost as if they're trying to act unpredictable and thorough.

2. Which isn't what one might say about the Rams. You know where they're going for their after-draft party. St. Louis signed 79 UDFA's in four years. 28 from Texarkanahoma, 24 from the Southeast, 13 from their Midwestern backyard. And only 14 from the rest of the whole country. Look at all those RAMS right next to St. Louis! Location matters, to Jeff Fisher.

3. The Niners' numbers are boosted by a heavy contingent of Stanford products (seven) and an unusual obsession with second-tier Big Ten talent. Of their nine UDFA's from that conference, seven have been recruited in 2012-13. All the other teams combined for just three. The Niners also curiously ignore the hotbeds of Texarkanahoma, enlisting just three (three!) UDFA's from that region since 2010. Maybe San Francisco doesn't do things like everyone else...

4. Meanwhile, Arizona likes Arizonans who like Arizona. Five guys from that state caught on as UDFA's with the Cards. Just one got signed by the other three teams combined. That's how the Mountain region became Arizona's second largest UDFA source.

Sweeping conclusion alert: There's definitely something to the idea that NFC West teams use undrafted free agency to stock up on players close to home and in their specific wheelhouses. Worth keeping in mind as soon as the seventh round ends, and the eighth round, the Honorary Baldwin-Bennett Round, begins.