If you missed earlier entries in the series, it'd be helpful for you to catch up before reading this one.

If you're a little hazy on what we've done previously, here's a little summary of the two metrics we've defined.

pSPARQ - a "position-adjusted" or "profiled" SPARQ which takes into account a few more parameters, weighting them according to public comments from Seahawks brass and analysis of the existing roster. The main change is that it uses broad jump more than bench press to determine the player's explosion/power SPARQ component.

Even if we already have five backs likely to be on the roster next season, there's still some value in determining a prototype and looking at the current draft through a Seattle lens. The pattern's familiar by now. All of the same information about earlier positions applies: this table represents a cross-section of Seattle running backs (and fullbacks) either currently on the roster or drafted by current Seattle management.

We won't need to tweak our formula this time, as our tight end adjustments will work fine here. Running backs do have high broad jump values, so the scaling is slightly different than for tight ends. The average running back comes in at a 110 pSPARQ.

If you somehow weren't already aware, Christine Michael is a freak. Robert Turbin, too, but to a much lesser extent. SPARQ is designed so that it's really tough to separate from your peers. Michael is sitting up at the top by a distance.

The most natural reaction to this chart is to question Marshawn Lynch's standing. SPARQ says that Robert Turbin is a better athlete than Marshawn. Crazy! Well, there's a few things to consider here. First: SPARQ measures aptitude and not ability. Marshawn is clearly a transcendent runner, supremely gifted and almost eerily aware of leverage, balance, and physics. SPARQ can't measure that.

The second point is a bit more tedious: we can't trust test numbers to be 100% accurate. Marshawn's shuttle is very, very slow, far below the RB average. It's probably just a bad test, as his 3-cone is good and he's clearly a very agile and fluid athlete. He'd be up near 130 (elite-range) with a shuttle which correlated better with his 3-cone number.

SPARQ is clearly a factor in our RB/FB analysis, as the five backs we'll likely head into the season with are all well above-average in pSPARQ. The following table shows how the three Seattle feature backs (Michael, Turbin, and Lynch) compare to the average RB, where the Z-Score is the number of standard deviations from the average 2014 Draft RB.

Physical freaks. Lynch's poor shuttle brings the average down a bit, but most categories are still pretty outrageous. These values help form the profile which we can apply to the current draft class.

Ah, I will need to address that bench press number. I theorized in Part 2 of this series that bench press isn't a parameter which the Seahawks prioritize. Here, though, we see that Turbin and Michael have very good bench press results. There a a few reasons that I believe this tends to be closer to statistical noise than a trend. One, the median bench press of all 7 backs is 20, which is essentially the average. This includes fullbacks, sure, but it doesn't make sense to me that we'd isolate bench press in running backs and ignore it for fullbacks. I went back and looked at all "camp body" running backs the Seahawks have had in the PCJS era. There was no apparent trend toward a bench press above the general average.

I'd thus say that we need more data to really know. I certainly don't feel that we're underrating either Michael or Turbin by diminishing the impact of their bench result, so I think our metric is still doing a good job. Still, the bench might be something to watch and take into account for running backs on a player-to-player basis.

I can't really leave this section without raving about Christine Michael: relative to the 2014 class, he's one sigma from the mean in 40 time, bench press, and broad jump, two sigma in shuttle and three cone, and three sigma in vertical and 10-yard split.

What does this mean? Well, Fun Fact To Know And Tell about CM: if you took each one of his test scores down (40 yard time increases, broad jump decreases, etc.) by a whole standard deviation his pSPARQ would be 130 (!!!), good for ninth-best (!!!) in the 2014 class (!!!!!). That is insane. I can't process it. It's impossible. There are not enough exclamation points in the world.

I figured it might be interesting to look at some past running back SPARQ results. I tried to include backs with varying levels of success and pedigree. There's no intentional selection bias here -- I just went with names off the top of my head.

LeSean McCoy's numbers just can't be right. You can't tell me that he's almost literally worse at broad jump and vertical than every running back in the 2014 class. Maybe he was sick, or maybe he owed money to scary people and had to throw the events to avoid getting kneecapped. This seems more likely to me than LeSean McCoy having a sub 30" vert and 9' broad jump.

Something to watch: I'm anticipating that some among you will (rightly) look at the pSPARQ numbers and think the increases are too large from rSPARQ to pSPARQ. I thought the same thing at a gut-check level when I first ran the numbers, but the average increase is small. I would say it's more a case of traditional SPARQ metrics not properly rating players like Lache Seastrunk, who visually passes the SPARQ test, but doesn't have the raw upper-body strength to have a reasonable bench press number. 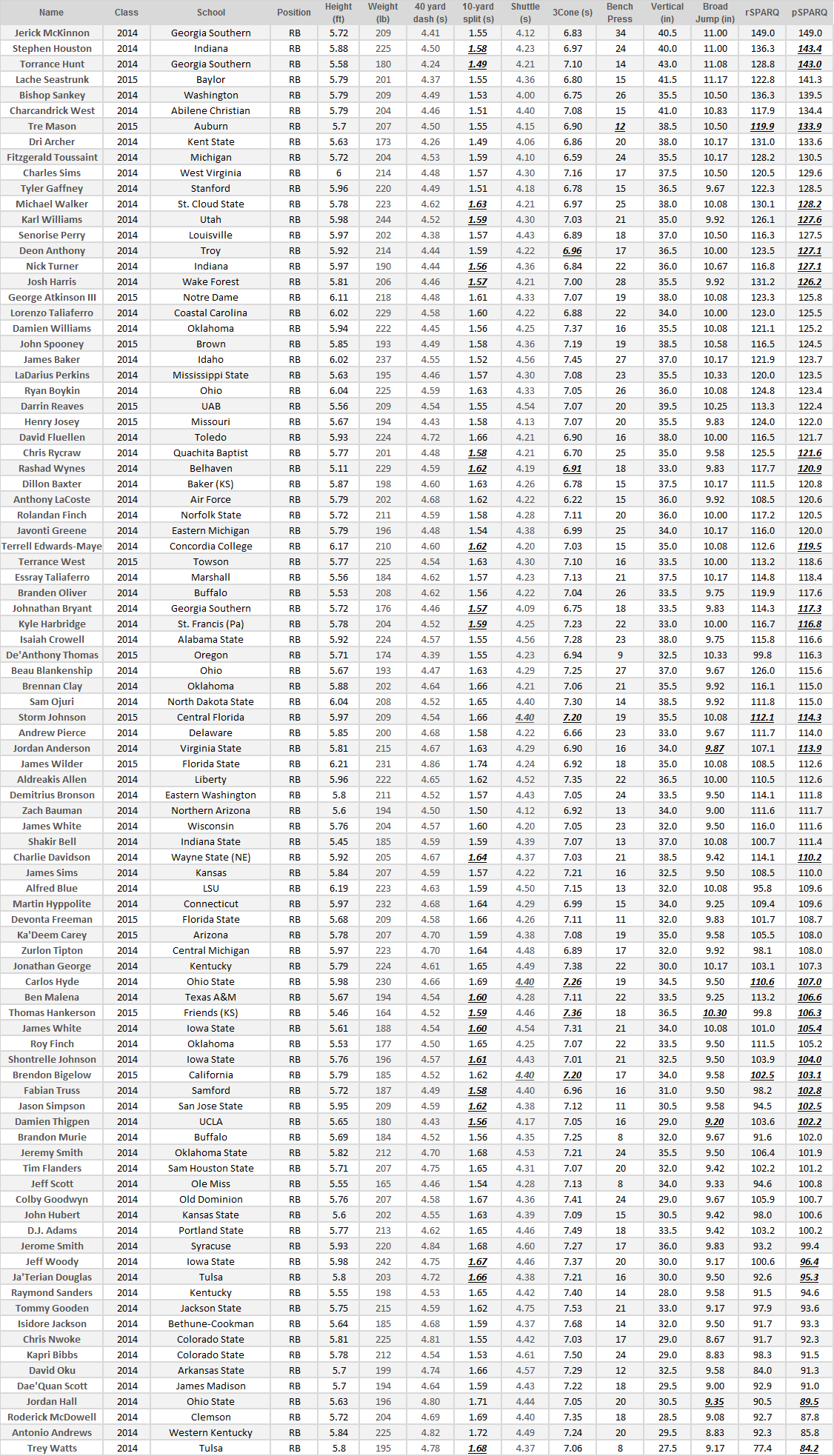 So, did Georgia Southern have the shortest, SPARQ-iest backfield of all-time last year?

And now, some sub-Michael (but still inhuman) players to watch.

I've fought off making Sankey my guy for a while, mainly because I was worried about bias. There are draftniks who feel he's extremely average and shouldn't go until day 3. I just can't accept this when considering the tremendous combination of SPARQ athleticism and record of production that he offers. He's the most agile back in the class to go with great speed, strength, and explosiveness. He's durable and has a very compact, sturdy frame. He's just built the right way for a running back.

Beyond the numbers, there's something effortless about Bishop. I'm somewhat surprised that we don't see more Arian Foster comparisons with him; his ability to fluidly cut and go against the grain makes him a natural fit for the zone-blocking scheme. I think that sometimes players who make it look so easy are penalized for their kinetic efficiency. Bishop moves somewhat like players in the mid-2000s FIFA games. In full rebellion of physical principles, there seems to be almost no inertial penalty when he changes direction.

As far as potential fit with the Seahawks, he's a phenomenal pass-catcher (10" hands, too!) and pass-protector. We know that Seattle grades for their own team, and you could easily see him stepping in at third-down back as a rookie. Moving forward, he has the potential to be the kind of sustaining back that Danny spoke about in his excellent article yesterday. Just take a look at the video from the 2013 Arizona game. Insane weather, unreliable passing game, and Bishop carried the team on his shoulders.

Oh, and hat tip to Field Gulls' Jared Stanger, who noted that Seattle running backs coach Sherman Smith was on site with Bishop for his pro day. I think there's real potential for interest here.

He's a crazy SPARQ outlier. He fits our profile because he'd fit anyone's profile. Slightly shorter than the ideal 5100 Seattle back, he's still a good weight at 209 lb. He's legitimate competition for Michael in most categories -- 32 bench press reps, 11'0" broad jump, 40" vertical, 4.41 40, and a 4.12 shuttle. Inhuman. While the size is slightly off, he offers enough in athleticism that he might be a good option. For perspective, he's the same weight as Frank Gore in 2005 while being only half an inch shorter. Watch this space.

Why is he potentially available? He played option quarterback until the 2013 season, when he started at tailback. He's unrefined and would likely take time to develop, so it's a little hard to see him on the 2014 roster with no obvious role for his skill set. A small-school athletic freak undervalued because of a position change? It's so Seahawk-y.

I think it's pretty clear that Stephen Houston's the most Seattle back of any in the class from a purely statistical perspective. 5'10", 225 lb, and stupid quick and explosive with above average speed results. SPARQ doesn't do much to measure actual running ability, though, and he's projected as a late-round pick or UDFA candidate. Presumably this is because his talent as a running back fails to match his physical aptitude for the position.

I'm throwing West's name in even though he's clearly a few tiers down in SPARQ. Noted as visiting the VMAC on Tuesday, it appears that the Hawks are interested. He has no shuttle or 3-cone time publicly available, so I assumed a relatively normal one for his height/weight/40, but it's quite possible that he's elite there. A good comparison is Spencer Ware, with their numbers matching very closely in almost every category.

Charcandrick! As we know from earlier favorites LDT! (said like Charles Barkley's Ginobili!, natch) and Crockett Gillmore, I love a good name, and if names factored in SPARQ, Charcandrick would shoot to the top of the board (along with The Bishop).

Probably ten pounds shy of what Seattle likes in their running backs, but he fits the statistical profile everywhere else and his test results show good lower-body and core strength for a 205-pounder. I'm probably betraying the intent of the article here. He's probably not a Seattle running back. But, watch this highlight video and get back to me.

I know, I know, the competition level is super low. I get it. It's a highlight video, they only show the good parts. I'm not saying he's a great prospect. But it's still funny to watch a player so athletically superior to each and every one of his opponents. He looks like he's playing against East Dillon from Season 4 (Friday Night Lights, natch, and if you haven't seen FNL, shame on you).

We're now through most of the offense. We'll finish up with wide receivers early next week.