NFL Draft 2014: Where did the Seahawks play?

Part one of a two-parter. Today, a statistical staredown at who the Seahawks are drafting and seizing on the open market -- through the prisms of conference and region.

Share All sharing options for: NFL Draft 2014: Where did the Seahawks play?

Hey you, amateur mock drafter, and you, generic awesome Twelve, do you want an edge in your NFL draft prognostication? You've come to the right place.

Fair warning: Though this post has some clues about how the Hawks like to collect draftees and undraftees, it does not contain a mock draft. I'll leave that exercise to people who enjoy being wrong 93.75 percent of the time, on a good day.

Then what is this witchcraft? Well, what I've compiled here is a conference-based geographical examination of the Seattle Seahawks' drafts and post-draft acquisitions.

Part 1 -- today's post -- is a recap of the Hawks' selection history, organized by conferences, and then broken down by region. After you get that data splashed all over your brain, I've got five trends picked out I'd like to share with you. Oh yes, there will be pie charts and tables. I don't know about any .gifs. Please share any good pertinent ones with the whole class.

Next week, Part 2 will give us a look at how similarly other teams approach their drafts, to see if what the Hawks do is rare or common. Maybe when this is all done, I'll be lucky enough to have shed the tiniest bit of illumination on how this front office likes to operate. Maybe.

Here are, then, the team's last four drafts, and undrafted signings, in various graphical form. 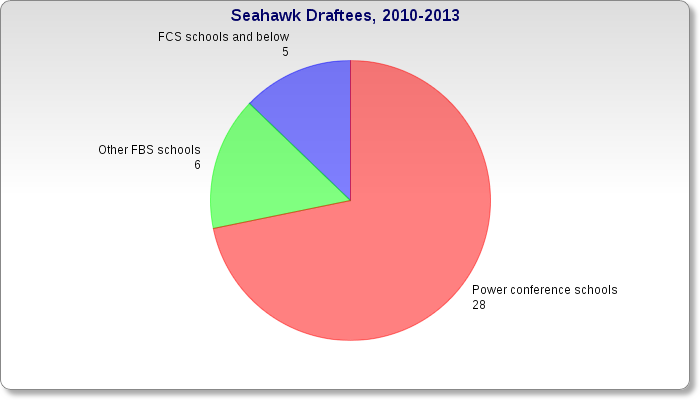 That shows four years of history; break it down further and you get Graph 2: 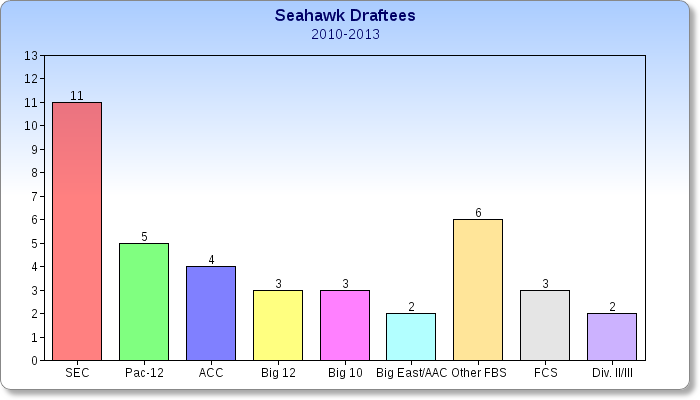 How about the undrafted guys? Where are PCJS getting them from? Graph 3 says where. 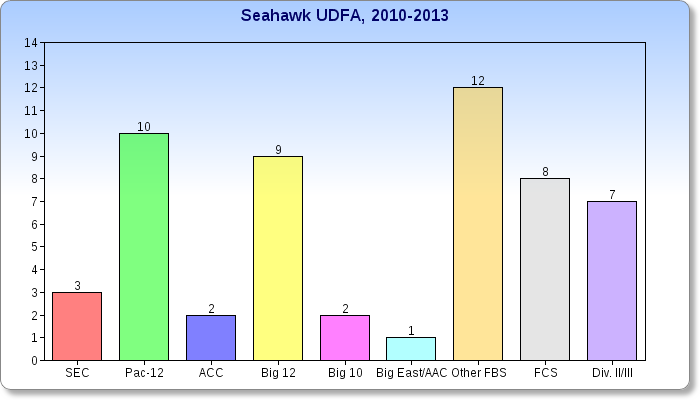 Pretty skyline. (EDIT: Oops, that ACC should be just 1.)

Last diagrams. Here I lumped all these guys into six geographical regions, in Graphs 4 and 5: 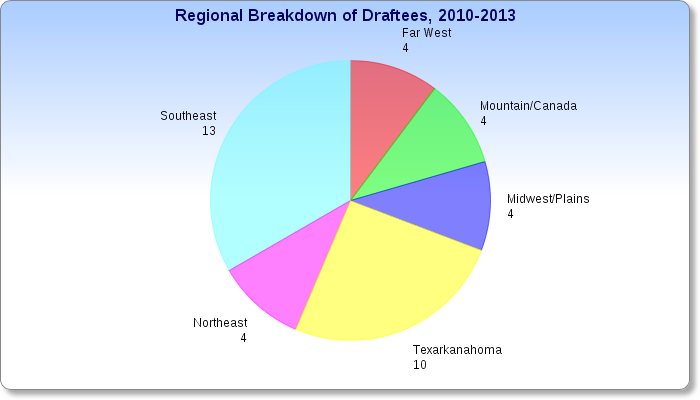 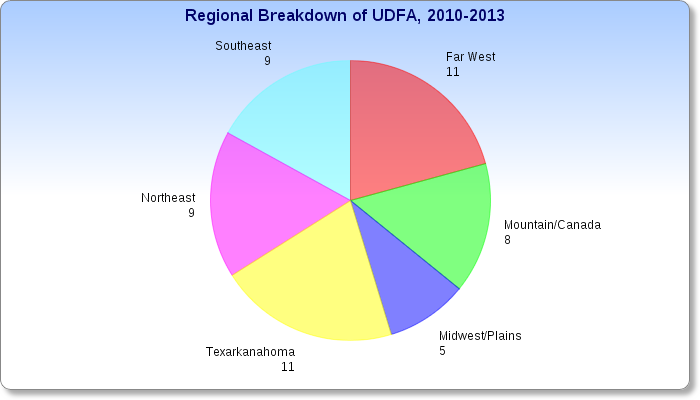 With only a four-year sample to work with, and numbers this raw, it would be easy to find trends where they don't exist. But I'm going to dig a level deeper in five observations that I'd like to relay.

It used to be a thing. See that 5 in the Pac-12 column, up there in Graph 2? All five of those guys were taken in the first two years of the PCJS regime. See that giant 10 in Graph 3, towering over the SEC? That stack hides a shrinking number.

Meanwhile, since the Hawks snagged Earl Thomas and Russell Okung in the first round of 2010, they've essentially passed on the Big 12.

The apparent move away from the 12's (HOW DARE THEY) really comes to life in that table. Consider that 22 guys came to the Hawks from those conferences in 2010-2011. Only five were admitted in the following two-year period.

2. The FO has virtually no interest in players from weak major conferences.

I averaged out some final college football power rankings from the 2011 and 2012 seasons and found out that there's a simple reason for the lack of selections from the Big Ten, ACC, and Big East/AAC. Those conferences are not good, relatively speaking.

(Rankings synthesized from ESPN, bleacherreport.com and Jeff Sagarin. They just happened to match by semi-coincidence.)

In four years, the Seahawks have drafted or signed as UDFA a total of 41 players from the top three conferences, and a scant 13 from the bottom three. 41-13. It's almost like a CLink score.

Two conclusions leap out: perhaps inferior conferences do not impress PCJS, or the uneven competition throws a monkey wrench into their evaluation process. Either way, they've shown they prefer to shop elsewhere.

A good way to illustrate this point, is by remembering that the Hawks have drafted or signed as UDFA a total of four players from Utah State University -- one more than they've ever added from the entire Big East/AAC. And that includes two guys from West Virginia, a school which has since left the conference.

3. The FO enjoys giving the less prestigious programs some undrafted love, although that trend might be slowing.

PCJS have signed 53 UDFA in four years. Nine remain with the team. Breaking it down further nets us this table:

Yep, looks like the UDFA crop is a good chance for the small-school guys: more than half of the Hawks' total signings came from outside the major conferences. Sure, Doug Baldwin came from Stanford and Jermaine Kearse bleeds purple and gold, metaphorically. But Ricardo Lockette's from Fort Valley State, which apparently is a real place, and "future Byron Maxwell" DeShawn Shead played at Portland State.

PCJS might also be making a transition to spending late draft choices on the most obscure names. The data is inconclusive, but interesting, and warrants further attention, like maybe after a couple more Lombardis:

It's important for some of these undrafted guys to stick -- they generally bring cap value, unusually sized shoulder-chips, a thirst for competition, Carroll's coveted "grit."

There's another reason why PCJS might spend a late round pick on a Division II lottery ticket, rather than wait to snap him up after the draft. That would be if they consider the roster to be so deep that a safe sixth- or seventh-rounder from the Big 12 would have a hard time cracking the team -- in that case, the reward of hitting on the gamble well outweighs the risk of wasting the pick.

4. Indications are that the FO doesn't care to spend its time scouring the SEC for undrafted talent.

Two explanations for this: a) the conference has been picked clean after seven rounds of 32 teams passing through it like hoarders at a garage sale. This is certainly possible, as a record 63 (!) players were drafted out of the SEC last year. The 42 draftees from 2012 is a high number too; it led all conferences. Add those together and that makes 105 SEC players' names called in two drafts.

Alternative explanation b) states that NFL teams aren't done after seven rounds, and they continue to add SEC players as UDFA afterward, so it would be difficult to snag more than a couple each year even if one wanted to.

Feel free to suggest a c) or d) in the comments. Part 2 will also provide insight, maybe shed some light, if it's done right, and not late at night.

5. Historically, the FO does appear to lean on its Western connections after the draft.

Thirty-nine draftees in four years. Sixty percent of them from the Texas-to-Florida corridor. That all gets flipped on its head in UDFA land, where the regions end up equally represented. Graph 5 shows us that no region has fewer than 5 or more than 11 UDFA represented, mostly because of a sharp increase in the proportion of players from Western colleges. That includes the Far West, Mountain West and even the Midwest.

One explanation for this phenomenon is that being based in Seattle allows Carroll and Schneider to see more Western players in person during the football season.

I'd also theorize that Carroll's pre-Seahawks contacts are strongest west of the Rockies and that Schneider's are most robust in the heartland.

Thanks for the temporary use of your eyeballs. It'll be fascinating to see how some of the above trends hold up or get turned on their heads when Part 2 comes around next week and I compare these results to Seattle's divisional foes, plus the two most and two least successful franchises of the past four seasons.