The story of one college player's tumultuous journey through the often untold travails and pitfalls of college football and the NFL Draft.

…three days after the conclusion of this year’s NFL Draft. Pretty much all of the teams have wrapped up their draft, their class of undrafted free agents (UDFA), and have given invites to a couple dozen more players as rookie-camp tryouts. If you haven’t gotten the call by today, you’re probably not going to. I get a direct message on my Twitter account:

It’s Romelle Jones (@504_2DaMeatShow), a DT from the University of South Alabama that I had been following and tweeting about last season.

Some names I didn't give the attention I meant to in my mock...Romelle Jones from South Alabama. Highlights: https://t.co/kbfuwtnJgw

"Nothing much man. I wanted to ask you for a favor though."

"I’m having a hard time getting a look. If you know any guys from the CFL could you try and help me out? Any level, just want a shot."

Wow. Damn. You never really think about this side of football or the draft. And there are probably hundreds in this situation. How do you help someone find a break? I don’t have connections in the CFL. I do have some connections in the 12th Man Nation. Let me tell you what I know about this overlooked player and maybe some dominoes will begin to fall...

While the level of competition was certainly lower for Jones than Jernigan on a week-in, week-out basis, Romelle still put up great tape, including 3 tackles and 1 TFL against a talented SEC offensive line at Tennessee (including 1st round pick Ja’wuan James, 6th round pick Zach Fulton, and UDFA Tiny Richardson) in Week  4.

My interest in Romelle began when I started looking for players that could replace the (at the time) impending Seahawk free agent Clinton McDonald. McDonald was 6’2"/297 (283lbs coming out of Memphis) and could rush the passer from the 3tech spot. I would literally scroll through the NCAA sack and TFL leaderboards for guys getting production that had similar profile to McDonald. That’s when I found Romelle.

First, I saw the production. Second, I saw he fit the profile I was targeting. Third, I looked for his tape. This is some of what I found:

You may notice in that last highlight that the announcers mention Romelle was playing with a sprained MCL. That Arkansas State game was week 8…the injury occurred week 7.

How did it happen?

"We were playing a conference game against Texas St, and I got my first TFL on the first series of the game. The next series of the game I was injured due to a clipping penalty. I dislocated my kneecap, sprain(ed) my MCL, and tore my meniscus."

Good grief, that sounds painful. Romelle not only played the week after the injury; he played the entire rest of the year with it. The words of the Jaguars’ team captain:

"I was on pace for having my best season of my college career, and…the guys who came in (my) first year had a goal of making it to a bowl game in our final year. With all that weighing on me, people pulling me in two directions, and me knowing that my team needed me to accomplish the goals that we had set in the beginning of the year. I made the decision to play with the injury. I was still able to accumulate 3.5 sacks and 7 TFL over the next 7 games while playing limited reps."

By the end of the season, USA missed out on Bowl eligibility…Romelle delayed surgery again in the hopes that a post-season all-star game would invite him. RoJo didn’t get that call. Waiting for the call that didn’t come ended up being a two-week delay, and those two weeks would turn out to be unfortunate.

"The surgery that I had, required me 4 weeks of no physical activity. So at (that) point I (was) 6 weeks behind and super anxious to start working out. Then I found out that our team pro day would be here in less than a month. That was heartbreaking to hear because I knew I wouldn't be ready."

From his home in Louisiana, Romelle still wanted to make the trip to Mobile, Alabama for his team’s pro day. The financial status of a true student-athlete wouldn’t allow Ro to afford the trip. Even if he made the trip, he wouldn’t be medically cleared to participate. 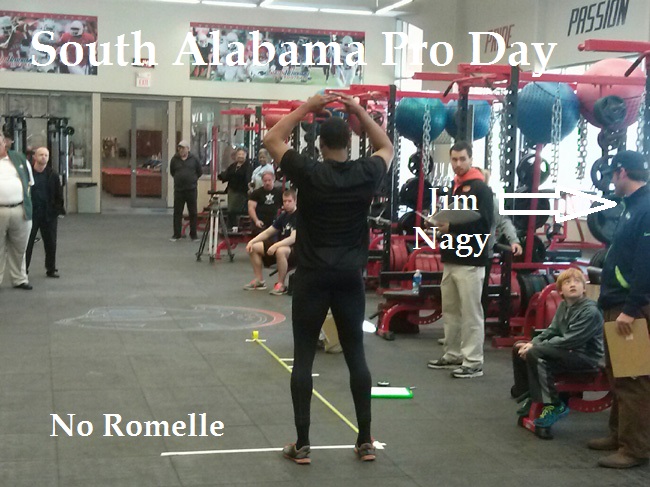 Instead, Jones focused on getting permission to work out at Tulane’s pro day as a local exemption player, and he was granted it.

The Monday before his workout at Tulane, Romelle’s own personal Hurricane Katrina of professional misfortune continued when he was notified he wouldn’t, in fact, be able to participate.

"This was an even bigger heartbreaker, and I had no idea what else I could do. It was so late all I could do was pray that someone would give me a chance to workout for them. I was calling every scout that had inquired about me. Many of them told me it was too late."

Then, out of the blue (and green), came a call. Seattle Seahawk southeast area scout Jim Nagy was on the phone.

Romelle Jones holds an individual workout for Nagy…as a fullback.

Nagy had mentioned to Romelle during the 2013 season that he envisioned him at fullback. Apparently, sometime after Nagy initiated the idea, other teams seemed to follow suit. Nagy said the Seahawks felt Jones lacked the bulk to play DT in the NFL. Romelle took the change under consideration, listened to the advice of his coaches, and embraced the challenge of the position switch, and as soon as he was medically cleared he began working on route-running and pass catching.

At his private workout for the Hawks, Romelle was down 30 lbs to 264, but 3 months out of surgery he still lacked the explosiveness a healthy knee would have made him capable of. But there were some positives:

"Mr. Nagy mentioned that my route running and ball skills (were) what impressed him the most."

"At the end of the proday he (Nagy) pulled me to the side to talk to me. He told me that my positional transition was amazing, but my injury was just too much. He also told me that he would love to work me out again next year, and should definitely not give up."

It has become clear, one week and three days of rookie mini-camp later, that the theme of the Seahawks draft class in 2014 is HEART. There are elements of SPARQ, there are elements of size, but this year they tried so hard to avoid guys that didn’t have the desire, the passion, the fire, and the heart to enter the World Champions’ locker-room and hold serve with their existing, highly confident, highly competitive locker-room.

For Nagy to make a special trip to work Romelle out, to give him the kind of feedback and encouragement he did, he (and the Seahawks) must have been seeing Romelle's heart as an asset. I agree. And his mind is pretty damn sharp as well:

Going into the draft Romelle didn’t have huge expectations. He had talked with most teams during the season…but it was the hometown Saints and Seahawks that had shown the most interest...both wanted him at FB. He was hoping for a camp invite. Even only on a tryout basis. But no call and no invite ever came.

"I do believe that I was red-flagged due to my knee, but if I had to go back I would do it exactly how I did. At the end of the day, that is the core principle that I was raised with. I was the team captain, and my team needed me."

Now, with no more college eligibility and no more access to free training and rehab, Romelle is working out on his own time and his own dime. His personal words describe it better than I could ever attempt to:

"I am still working out on the daily. I am only (roughly) 4 months off of my surgery so I am still doing lots of lower body strengthening. I have a few jobs lined up if nothing works out for me with football, and I have been doing odd jobs here and there to make some money. I will have to get a job soon though, because Romelle Jones Jr. will be born in June or shortly after. But as of now I'm doing everything that I can to get a shot on anybody's football team. I have been calling any CFL team that I can get contact info on and trying to get my film out to some people. At this point I'm just extremely hungry for the chance to play football again. I'm not the most confident guy, but one thing I am confident about is my ability to play this game. Whoever does give me a shot will definitely have the hardest worker in the building. It’s been a struggle. I would have never thought I would end up here, but no matter where I end up I know all of this is God's work and wherever he takes me is where I belong. I will just keep praying and working as hard as I can, and when my opportunity does present itself, I’ll have something to prove."

There are few things in life that mean as much as being given a chance. I can remember with such specific clarity the times and people that have given me my chances in life. So here's what I wanted to say:

I genuinely believe in you, Romelle. I hope the phone rings. I hope, down the road, the things you’ve been praying for will again be the things you’re playing for. I hope you get your chance. Please, always remember that sometimes the undrafted aren't lost...they're simply undiscovered.