Attached is Field Gulls' final count for 2014 Pre-Draft VMAC visits for the Seahawks. It also includes the reported offsite visits/workouts and certain Pro Days where Seahawks Assistant Coaches have been in attendance (and often personally directing workout drills). Seattle's scouts go to nearly every Pro Day, but an actual key assistant coach on-site -- coordinators or positional coaches like Dan Quinn or Kippy Brown -- is less common, and perhaps more meaningful. This list has been compiled by Field Gulls' authors & minions but credit especially goes to Jared Stanger and Davis Hsu for incredible vigilance (and Davis for putting the graph together). Stanger in particular goes Zabrutor-style on pro day videos to uncover Seahawk scouts and coaches in attendance.

The meaningfulness of this list is up for debate. While pre-draft smoke and mirrors are all part of the game, the Hawks have indeed used these visits to gather information on players they're interested in. In 2013 the Seahawks Pre-Draft Visits list included their top Draft pick in RB Christine Michael, WR Perez Ashford, who was in camp briefly, DT Michael Brooks, who is still with the team, and LB Craig Wilkins, who was cut after training camp in 2013. They also had an offsite workout with QB BJ Daniels, and he was picked up after being drafted then released by the Niners.

Most of the visits tend to be 7th round, UDFA types and the team's front office has talked about how they dual as recruitment tools for after the Draft (and we now know how much the Seahawks value their recruiting ability, which I'll talk about later today). 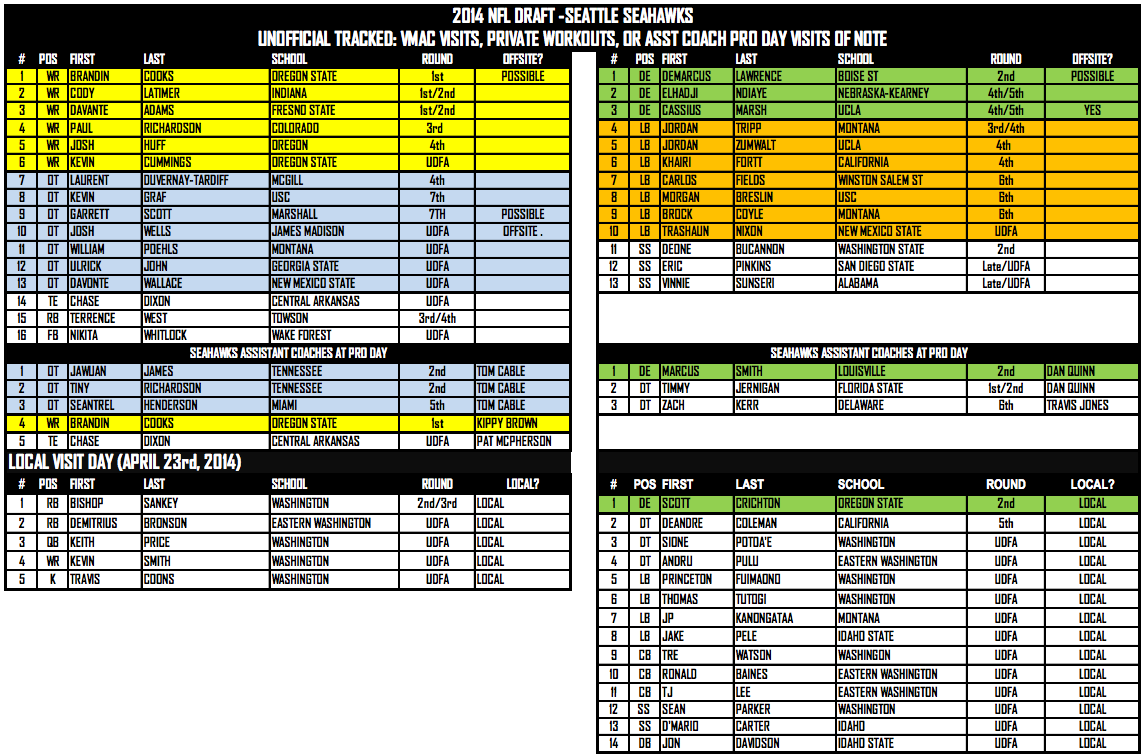 Propers again to Davis and Jared for their sleuthing.