Seahawks out on Jermichael Finley, per report, perhaps due to high hopes for Chase Dixon, Rashaun Allen

Share All sharing options for: Seahawks out on Jermichael Finley, per report, perhaps due to high hopes for Chase Dixon, Rashaun Allen

The Seahawks will not pursue free agent tight end Jermichael Finley (as I'm sure you've seen by now), according to a report by Pro Football Talk's Mike Florio. Finley, who visited the Seahawks back in early March, and who previously had publicly declared his desire to play for Seattle, was recently cleared by his doctor for football activities after having his C3 and C4 vertebrae fused together. It's looking like the Packers or Giants might be the favorites to sign the pass-catcher at this point.

As for Seattle, while Finley would be an interesting acquisition as a moveable chess piece type of tight end/receiver hybrid, it's not entirely surprising that they're no longer interested. The Hawks have nice depth at tight end with veterans Zach Miller (who recently took a pay cut) and Anthony McCoy set to return, and sophomore Luke Willson waiting in the wings. This "decision" to not pursue Finley may also speak to the team's belief in Cooper Helfet and their excitement over rookie free agents Chase Dixon and Rashaun Allen, both of whom coaches got a better look at during rookie mini-camps and team OTAs.

Allen, out of Southern University, was signed as a free agent following a three-day rookie mini-camp with the Seahawks. He is 6'5, 250 pounds, and ran the 40 in 4.68 seconds at his pro day, also registering a 4.52 second short shuttle, a 7.35 3-cone, 24 reps on bench, and a broad jump of 9'7". Allen's 38" vertical jump matches the number that Luke Willson put up last year, so you know the team likes his athleticism first and foremost. Per reports out of the VMAC during the rookie mini-camp a few weeks back, Allen had a great couple of days catching the ball, so he'll be one to watch during training camp.

Dixon, 6'5 and 243 pounds, is a guy that the team signed on Day 3 of the NFL Draft after all the picks had been made. He made some noise early on in the 2013 season with six touchdowns in seven games for run-heavy Central Arkansas -- projected by some to be a mid-round pick -- but broke his leg and the injury caused him to fall off of teams' radars. The Seahawks worked Dixon out prior to the draft and had a sixth round grade on him, per John Schneider, but got him in rookie free agency. Dixon, like several Seahawks in his draft class, has had to overcome major challenges in his personal life (his father, a former NFL player for the Falcons, Raiders, and Oilers, died suddenly last year) and a debilitating lower-body injury (a bad leg fracture) to get to where he is today.

As you'll see in the GIFs below, though, (all compiled/found by Jared Stanger, who has been on the Dixon bandwagon even before the Draft), Dixon has an enormous catch radius, excellent body control, and shows that he's able to catch the football away from his frame and come down with it cleanly. This typically isn't really something you can teach -- body control and leaping/timing ability is pretty innate. I'm guessing the Seahawks were impressed with this, and as Jared pointed out on Twitter, may have discovered Dixon while scouting Paul Richardson. Here is a superb touchdown grab by the Central Arkansas TE vs. Colorado:

Here's a better angle on the absurdity: 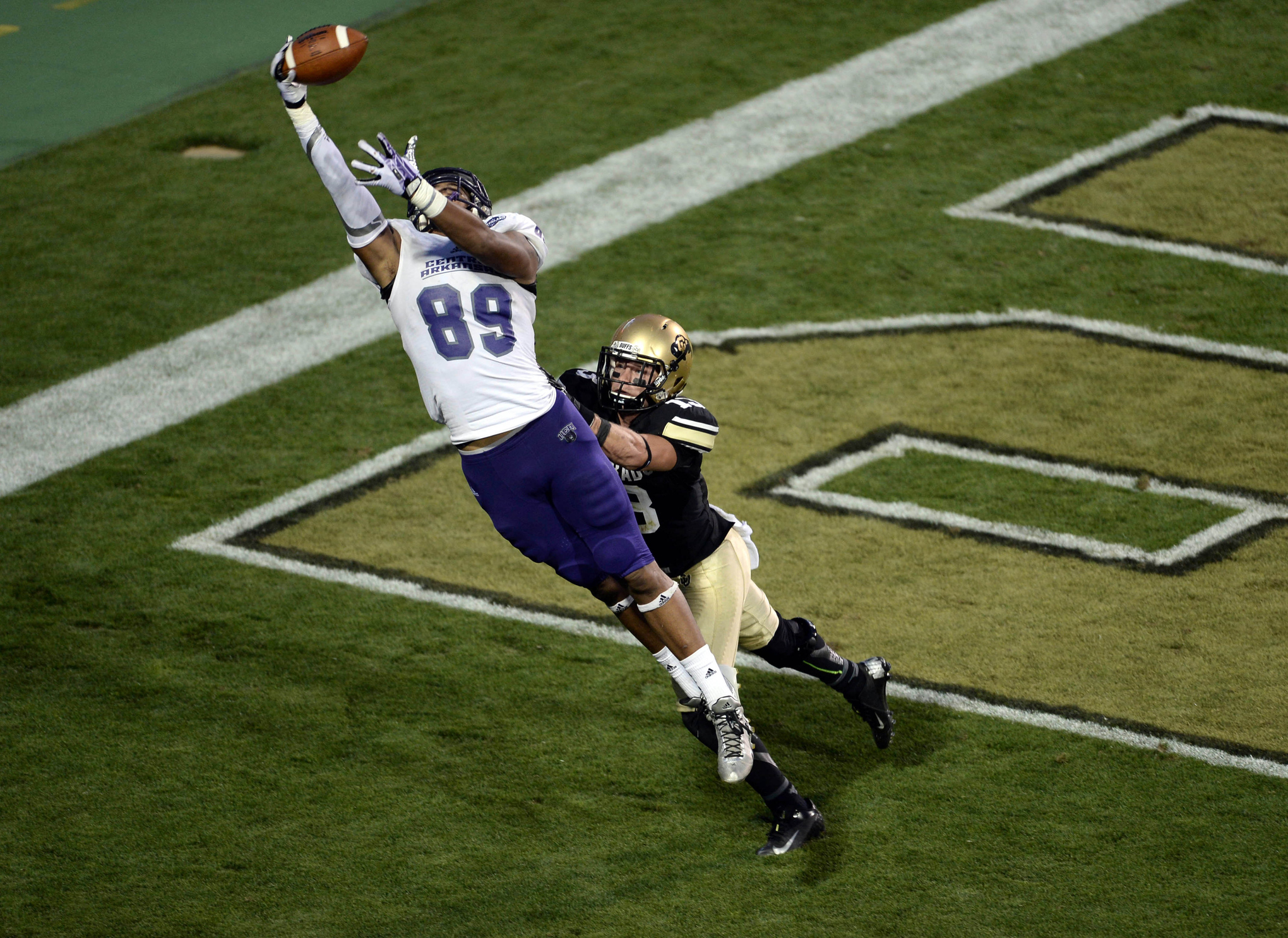 Based on the limited film on Dixon, he appears to be an excellent candidate as a red-zone threat, and evidently has elite vertical and soft/strong hands.

Here's a better shot of the TD catch vs Missouri State...and yes, this was a catch: pic.twitter.com/YQWqOQ0PEK

I'm so psyched on this guy. How's this for vertical?!? pic.twitter.com/n2zjD3wkde

Bottom line? Watch for Allen and/or Dixon to push for the roster with a strong training camp and preseason, mainly in a competition to grab that third tight end spot held by Anthony McCoy. McCoy's entire 2014 salary is guaranteed, but that type of thing hasn't kept the Seahawks from going with the player that performs the best.