Week ten of the NFL season brings you 14 contests, not one of which has an even line. To those of you who use these picks on a weekly basis, that could very well be a good thing.

I've begun compiling data on my picks for this column, not only my picks though, no. I'm tracking DVOA picks, Vegas picks (based on spreads), and hopefully soon, picks based on "public opinion" that I gather from various sports sites that allow voting on such things.

My hope is to find some trends, maybe something that can become useful moving forward, or at least an interesting tidbit from time to time. This week's tidbit might qualify as all three, honestly. In games with even spreads, I am 0-5. Clearly a trend forming, moving forward it could be useful for anyone brave enough to follow my lead on such a game in the future... and as far as probability goes, you'd think I'd stumble on to one or two correct picks, so I'll also deem this stat interesting. To me, at least.

Taking a look at those five games

The good news here is that all but one of those was a one score game, and three of the remaining four were won on the VERY LAST PLAY of the game. So all in all, I could feel a lot worse about an 0-5 record. And honestly, the Chargers absolutely blew that game last week... five plays inside the opponents 20, THREE STRAIGHT plays at the half yard line, there is no excuse. You failed me Bolts, you failed me.

I'm interested to see if this bit of reflection helps me, or hurts me moving forward.

Anyways, what you came for, the picks. 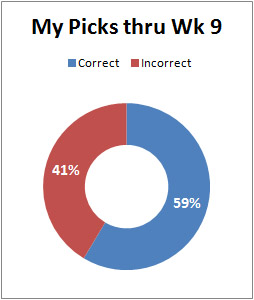 This is an interesting game, and difficult to predict. DVOA (and my gut) tells me the Vikings have actually been the better team so far this year, but the last couple of weeks they've looked subpar. Meanwhile, the Redskins have seemed to have had a better time of their last month.

I like underdogs, and I'm not a huge fan of the Redskins. That second part (and really, the first as well) shouldn't matter... but I'm having trouble getting away from the feeling that the Vikings will win this game.

Spread Analysis: Ugh, betting on this one... nah. I was barely able to bring myself to pick a winner.

Sorry "Duvall"... There's only one winless team that'll win this week, and it's not the Jaguars.

Spread Analysis: The Jaguars keep getting double digit spreads, and still find themselves unable to keep a game close enough to cover any of them - save for that miraculous effort against the Broncos. They're capable, I think?

Underdogs that have a fighting spirit are fun to watch, not fun to wager money on, especially when one of their only offensive weapons just got suspended.

I haven't liked the Eagles all year. A model for great success in college has been brought to the professional ranks by Chip Kelley, and he's found that success at times. Other times? Not so much.

Inconsistent teams are the worst part of picking games, because they are always throwing wrenches in your plans.

I'm not huge on the Packers either though. An elite offense has been dragging along that awful awful defense all year long, and what now? No Aaron Rogers, no Matt Flynn circa January 1st 2012?

Spread Analysis: This game opened with the Packers as huge favorites, ten points in most places. I already thought that number was a bit high, then this happened.

Now I'm absolutely sure a ten point spread is too much, and if you got a bet in on the Eagles before the spread came down you should be pretty pleased. If not? Don't bother with this game.

The Bills have found ways to compete, for the most part, since EJ Manuel forgot how to slide back in week 5, but have not ended up on the right side of the final score near as often. Luckily for the fans in the other forgotten corner of the country, the young guy is back and looks to be ready to go this weekend.

Spread Analysis: I like the Bills, but in EJ's first game back, there are surer bets this weekend. You know what, I take that back... there really aren't. Bills cover.

Spread Analysis: 7½ might actually be a good bet, assuming Terrell Pryor plays. Without that knowledge though, let this one be.

The Rams have put together two straight "decent" games, but the Colts are out of their league, and playing at home.

Spread Analysis: The Rams have what it takes to keep this game close. A loss by 7 and they cover, I'm tempted. But, I'll pass.

I hate to do this... but with two Pro Bowl lineman missing this game, and a third quality starter out... It's hard for me to go with my favorite team this week. You can only squeak past mediocre teams with poor first half performances so many times before one bites you.

It hurts my heart, and I hope so very much this is one of the many times I'll be wrong this year.

Spread Analysis: The Seahawks are a better team than the Falcons, but on the road, following two poor performances... The Falcons are another mediocre team that may well fall victim to Russell Wilson's penchant for comebacks. This is no time to be betting confidently on either team.

The Ravens have spent the entire year figuring out how not to win games. I won't be back on that train any time soon, and certainly not this week. The Bengals are a good team, that is occasionally great. Forget what you saw last Thursday though.

Spread Analysis: A win of almost any sort for the Bengals and they cover. I like the odds, even on the road in division.

On the road, and in the division, I still like the Lions here.

I'm calling them, "The only NFC North team with a starting quarterback"

C'mon Vikings fans, you know you don't have a starting quarterback either...

Spread Analysis: Over the past four weeks, road favorites are outscoring their opponents by about four and a half points a game. What does that mean? It means I'm taking the Lions to cover.

I love the Panthers, they've got a tough defense and a run game. I remind you all of this fact every single week. The 49ers are playing well though, are at home, and are essentially a slightly better version of Carolina.

I do prefer the Panthers head coach though, that play action call last weekend on fourth down was ballsy. Love me some Riverboat Ron!

Spread Analysis:These are two really good teams, though the better of the two is at home. If the spread were over 7 I'd probably go with the Panthers, at 6 though... I'll pass on the game all together.

Case Keenum has really been spinning it lately hasn't he? Defeats in consecutive weeks by a combined four points, to two of the five best teams in the NFL right now... that's certainly not lost on me. I'm concerned with the large amount of road underdogs I'm picking this week.

The Broncos are missing Jon Fox, luckily for them, their offensive coordinator is still going to be in the house.

Spread Analysis: It'd be just too easy for the Chargers to come back this week with a solid performance, don't put your money here.

Look to be falling from grace

This week though? Doubt it

Spread Analysis: A 7 point spread is a crummy spread, though since week 5 - which is when I took over this column and started tracking these things - 7 point favorites have covered every time. What does that mean? Well, not much, as the sample size is only three games. Let it be.

Nearly half of teams that have started a season 0-8 have won their ninth game of the year, the Bucs put together a great first half last week against the Seahawks, and the Dolphins have a locker room full of guys trying to convince you a guy who got booted off the team for saying some pretty terrible things to a teammate is not a racist.

If you're just looking at the track records of both teams, it's pretty easy to pick the Dolphins, but right now?

Spread Analysis: I almost want to take the Bucs to cover here, I truly think they are beyond due for a win. Just... go for it. Bucs, winners. Bet on it!

For those of you that reside on twitter every Sunday, you should join me. I focus largely on the Seahawks, but enjoy any and all NFL talk.