NFL Picks, Week 14: The Seahawks are the best

Like Kevin Bacon in Footloose, USA the Seahawks just want to dance. Read on as I pick their matchup with the Forty-Whiners, and all the other NFL contests of this weekend!

Share All sharing options for: NFL Picks, Week 14: The Seahawks are the best

This picks column has been a good time. Thanks guys for hanging around while I find my groove. I messed around with some infographic stuff this week, had some fun with a chart that describes the way I feel about Andy Dalton, and picked games.

I'm saving spread talk for later, as I try to hone my skills and build a more consistent feel for while gut feelings I should avoid, and which I should follow. But the straight up picks are below, and if you REALLY want to talk NFL odds and spreads just hit me up on twitter, I never say no to a conversation on football.

Currently holding the number one spot can't possibly be what the Texans imagined for themselves in terms of goals for the 2013... Flip side: I'm sure the Jaguars didn't imagine themselves winning this many games either!

Texans fans hoping for a loss are likely going to be disappointed.

Four kicks were required to win in overtime last week over the Bears.1 I love what I've seen from the Vikings, and I'll be rooting for them, but on the road against a Ravens team desperate to keep it's playoff hopes alive, I don't like their chances.

The Ravens (as I JUST said) are fighting for a playoff spot in a muddled AFC wildcard race, and can't afford to lose this game. They're the better team, and at home. They've got absolutely no excuse to drop this game. It'd take Al Pacino giving the speech of the century2 in the Vikings locker room to stop them.

The Colts have gotten stomped in two of their four games since losing Reggie Wayne, both were NFC West squads though. Lucky for them the Benglas are AFC North! Unlucky for them, the Bengals are a pretty good team.

Andy Dalton is perpetually inconsistent. If you charted his QB ratings for this year it would look a lot like a rollercoaster3 I bet. He looks to be coming off a slump, with a solid performance last week.

Sorry dog pound, or whatever you guys call yourselves in Cleveland...

Rex Ryan looked like a solid candidate to coach the 2014 Jets on November 4th. Fresh off a win over the Saints, things looked pretty good at 5-4.

Now? After three straight losses, things have effectively returned to normal in the Big Apple. Jets QB benched, Rex's seat is hotter than a McDonalds coffee4, and the Giants are the hottest team in the city. If the Jets don't win this week against the Raiders, they may not win any of their final four.

Love what the Lions did last week, but this Foles kid is playing out of his mind. Not to mention, the Eagles run game is still firing on all cylinders.

I absolutely won't pick the Dolphins. I promised at some point I wouldn't. I don't remember why.

Man, my memory is terrible.

This has to be the first time this year the Buccaneers are favorites, maybe against the Jets in week one?

The seafaring pirates are at home, and for that reason I should pick them, but I think Buffalo Bills steal away the home teams last chance to win a game this year.

Redskins defense is a mess, Chiefs offense has been coming on. Is Justin Houston healthy yet?

That would have been a realistic headline to expect when looking forward to this matchup back in, ooooh, April?5

Cardinals are set up as big favorites at home against the Rams. The spread here is somewhat surprising.

The Rams have faired a bit worse, while the Cardinals have taken advantage of a run through the AFC South in the last month or so.

Arizona should win, but I wouldn't be shocked one bit if the Rams give them some trouble.

I'm pretty sure the Giants still haven't won a game against a quality quarterback.6 Can't pick them against a Chargers team led by Phillip Rivers.

On top of all that, the game is in San Diego, so this guy will be there. How can you pick against that guy?

This might be the best game of the week.

Then again, last week the Saints matched up against a tough defense with a mobile quarterback and a great running game... people said that'd be a close one too.

I like the Panthers chances, and I'll go ahead and predict this while I'm at it:

The Panthers will win the NFC South, and there will be a rematch of the 2005 NFC Championship game.

NFC East - you deserve no more of my time

Below are my digressions. Little journeys off topic, some more so than others. Each one should take you right back to where the thought originated if you click the "^Back" link. Enjoy.

Oh and as always, you can find me on twitter. I changed my name to something a little easier to remember. Talk NFL spreads, picks, Seahawks, general NFL stuff... and obviously, Food Network.

1. What the hell was Marc Trestman thinking kicking a field goal on second down? It's not like it was a chip shot... YOU HAVE TWO MORE DOWNS. Jeez man, use at least one of them to get a closer look... ^Back

2. This is a reference to my all-time favorite sports movie scene, from Any Given Sunday. Watch. Also, it's my clever way of noting that on any given Sunday, the Vikings can win. I think that Sunday was last Sunday though. Sorry Arif. ^Back

3. I actually took the time to chart it, and much to my pleasure it looks EXACTLY like a rollercoaster... 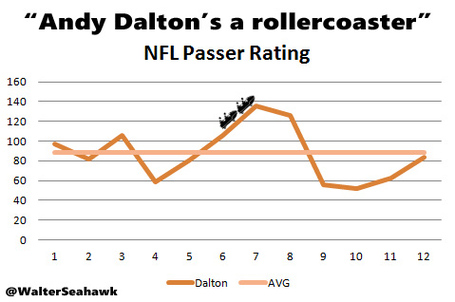 I put the roller coasters in there to really drive home the point. Did it work? ^Back

4. Writing that line about hot McDonalds coffee brought me back to a fairly illuminating documentary I watched about lawsuits against corporations. This is VERY political, and COMPLETELY off the topic of sports (click here if you don't want to read on), but I really enjoyed the film. Check it out. If you like it, hit me up on Twitter and we can ramble on about tort reform!^Back

5. I took the time to see how high people actually were on the Packers and Falcons, because it's been a long handful of months for me, and it occured to me I may have just lost track.

Nope, pretty close. Ranked by SBN blogs as 5th and 6th best teams. Funny how things go in the NFL... Did you see where the Texans were?^Back

6. So I checked and was honestly surprised to find that they have not beaten a single team with an average quarterback. Not one. I mean, I kind of went the lazy route - using 2013 passer rating, which leaves out some of the details. But none of these guys are even close.

I fooled around and made an infographic for you, because I had a few extra minutes. 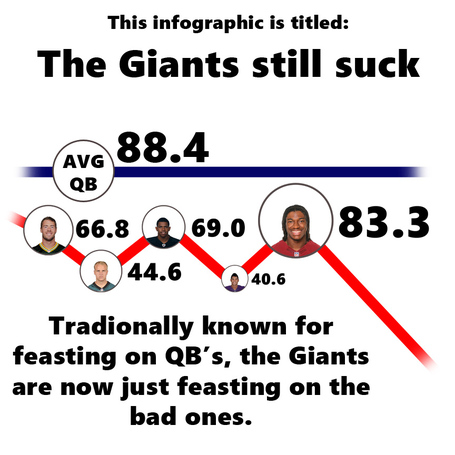