[UPDATE NOTE: The Seahawks were actually the 2nd-youngest snap-weighted team in the NFL in 2013, per Football Outsiders. Which is seriously crazy, considering they were the hottest team per DVOA over the final couple of weeks and were 25 seconds or so from playing in the NFC Championship game.]

Of course, it's one thing to say 'this is a young roster'. That's nice, and feels good to say, but it's another thing altogether see this idea in illustrated form - to look a a table showing offense and defense by age as this team will be built going into the 2013 NFL season (aka, September), and lucky for you, this is exactly what Davis Hsu has constructed.

This table below doesn't include the 8-10 incoming Draft picks (22-23 year olds, typically), any UDFAs that catch on, or any free agents the team might acquire, so keep that in mind. Even without that upcoming infusion of youth and maybe a few vets sprinkled in for good measure, it's remarkable how the strength of the team is weighted so dominantlysomewhere between the 24- to 27-year olds on offense and the 23- to 25-year olds on defense. 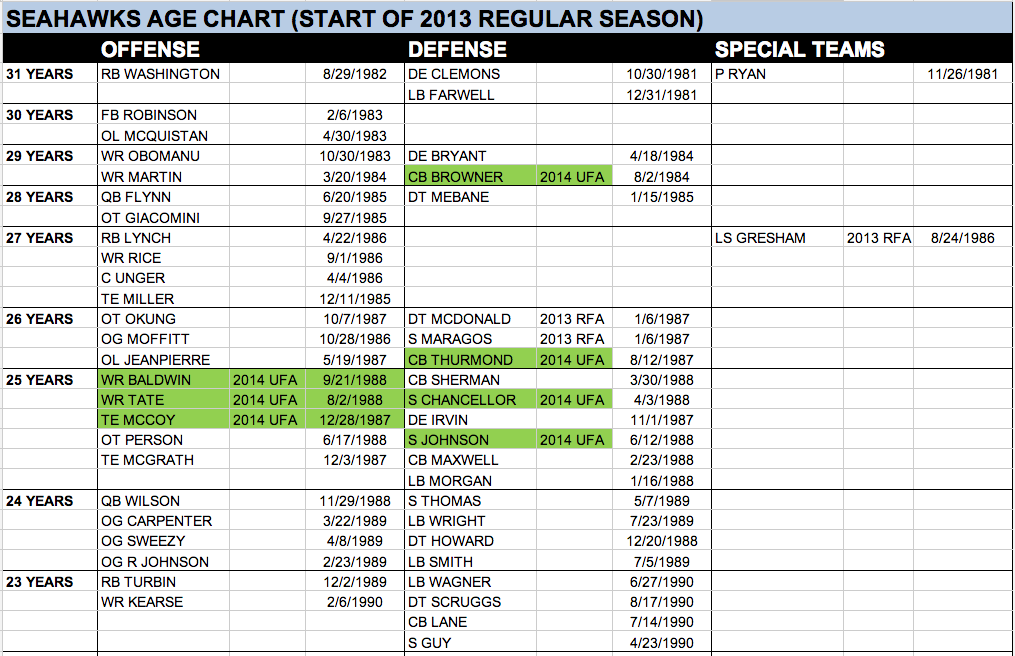 Note: This is not an exhaustive list of all seahawks that were on the IR, or signed to futures contracts, and it does not have any players that have had their contracts expire (Hill, Tru, Branch etc...). Davis has also highlighted Seahawks that will be free agents in 2014

Again, this is an age chart for the start of the 2013 season, basically - Sept 1st, 2013, not today. As Davis included in his note to me that had this table attached, The POWER of the roster is 25-27 years old, with the 27-year olds on the offensive side, with the defense staggered younger (which reflects the 21 of 28 draft picks made on the defensive side of the ball).

Without naming names of "who to cut," (you can make your own judgements on that) but assuming those released include a handful of older players, then combined with a new draft class of ten rookies (about 22-23 years old, these could be eight draft picks and maybe two rookie free agents) -- this roster can "not age" - i.e., the average age could easily remain at 25- or 25.5-years old.

Defying gravity so to speak.