I wanted to pass along some cap research for 2014 in relation to the Seahawks' offense. It may shed some light on the draft and free agency. Let me get right into it and talk about a few key players.

All cap figures from OverTheCap.com. 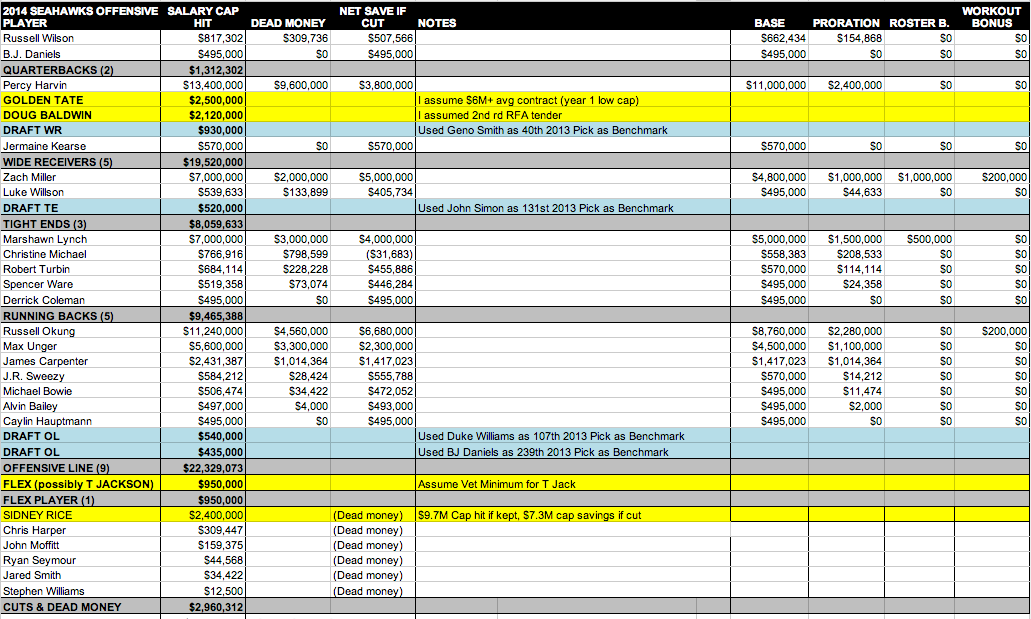 (1) Right now, I have B.J. Daniels on the roster and Tarvaris Jackson as my "flex" player. I assumed something close to the vet minimum, and Tarvaris has been around for a while - so his price would be around $950k on a one year deal. Perhaps he moves on, so I included him as my "Flex". He is an unrestricted free agent once the season is over.

(2) I have the Seahawks moving on from Sidney Rice. He would have a $9.7M cap hit, with $2.4M in dead money, which equates to a net savings of $7.3M. I factored in the Seahawks using a 2nd round draft pick to draft his replacement for cap analysis purposes (I used Geno Smith as my benchmark and added $15k.)

(3) I assumed the Seahawks would throw a 2nd round tender on Restricted Free Agent Doug Baldwin, which would put his cap hit north of $2.1M.

(4) I assumed the Seahawks would re-sign Golden Tate to a contract that averaged a tad bit over $6M per year. From studying the contracts of Brian Hartline and Victor Cruz, Tate's first year cap hit would be rather low - something like $2.5M or below, if structured in similar fashion.

(5) I assume the Seahawks draft a replacement for Anthony Mccoy/Kellen Davis. I used a 4th round cap benchmark.

(6) I left the running back situation unchanged, and all five are already under contract for 2014.

(7) I have the Seahawks moving on from Paul McQuistan and Breno Giacomini, they would not be cut, but rather their contracts expire after the season. I have the Hawks drafting two offensive linemen, one early and one late. I am not sure if they go guard or tackle early here, but I am convinced Seattle would do well to add talent to the line - for TALENT purposes and depth purposes. I don't view James Carpenter as someone you want to re-sign to a second contract. Bowie hasn't solidified his spot yet, but I am hopeful. Seattle could use more talented guards, a backup center if they don't re-sign Lemuel Jeanpierre, and depth and talent at the tackle position.

(8) I am pointing toward a $65M cap spend (includes Sidney Rice's dead money as well as charges for Chris Harper and John Moffitt (who were cut after June 1st, 2013 so can be pushed into 2014). For the defense, I think it could be something around $57M, and Seattle needs to keep room for specialists and IR and practice squad and so forth.

(9) I probably won't do a cap projection for the defense - too many moving parts with possible extensions coming for key players, but I will say this: I do think Seattle will re-sign Michael Bennett (at market rates) and Walter Thurmond (to modest money). Also, I think Seattle moves on from Browner, unless his next deal is modest.

I think Seattle will move on from Cliff Avril and keep Chris Clemons in 2014. They are both under contract at $9M+ but would save $7M if cut, so I think they take the better player - which I believe is Clemons. They also have to choose between Red Bryant or Brandon Mebane to control their cap (and I like how both are playing right now) - the net cap savings from cutting either of them is about $5M for either. You would then have to spend a fairly early pick to replace one of them in the Draft.  John Schneider was on hand at Notre Dame a few weeks ago, likely scouting their D-Line, who have a couple high-round prospects.